Connective Tissues: Little Magazines and the Lineage of Print Culture 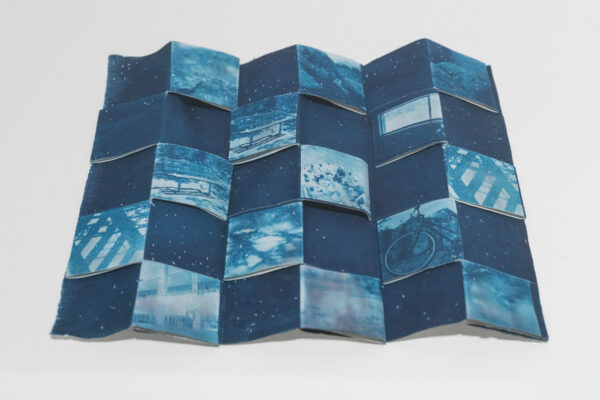 Before social media saturated our lives with content and its algorithms introduced us to personalized communities, which enabled instantaneous connections with people beyond physical and geographical proximities, visual artists built extensive communities by circulating publications and “little magazines” in the early to mid-twentieth century. Named for their niche audiences (which were smaller in comparison to mass-circulating mainstream magazines) rather than their physical form, little magazines were essential to building and connecting artistic communities, functioning as sites of discourse on art, literature, and politics for vast social networks. As such publications evolved and diversified, taking on various forms with their own distinct editorial liberties in styles and philosophies, technology advanced simultaneously and the necessity of print culture to connect artists was all but snuffed out. However, a communal legacy endures in contemporary publications and among the cult following of those who collect these 20th-century magazines, like Macaella Gray and Zoe Roden, who are BFA Art History candidates at UT Austin and are the curators of Connective Tissues: printed & published, on view at the Visual Arts Center through March 12th.

At the entrance of the exhibition, two large glass cases dividing the space house an array of various publications spanning decades, their covers and contents revealing their respective eras of influence. In one case, a a collage by artist Steve Abbott for a Soup Magazine cover bears the saturated screen-printed gestures of Warholian Pop art, which by 1980 (the date this issue was published) had already achieved iconic status. Directly to the left, a View magazine cover dating 1944 features a characteristically steely photograph by Man Ray, whose signature is scrawled in the bottom left corner. Nearby, Film Culture, the magazine founded by pioneers in experimental film, Adolfas and Jonas Mekas, wears a photograph from Akira Kurosawa’s Seven Samurai (1954) as its cover, which was released two years before this volume’s publication. The documents are not displayed in any chronological or stylistic order; they do not strive to anchor any specific timeline, rather, they present the multiplicity of forms and content that such 20th-century publications developed into. Gray and Roden have a curatorial interest in these documents as art objects in their own right.

Connective Tissues weaves its own social web through the inclusion of contemporary artists that are linked to Gray and Roden through varying degrees of separation. While the curators’ collection of 20th century little magazines included in the show points to the essential networking role that publications once played, the contemporary works included serve as evidence for their lineage and enduring legacies. 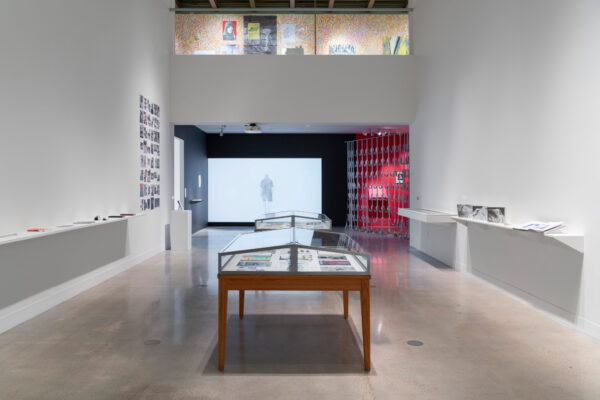 The exhibition layout takes viewers through the progression of stylistic developments in print media beginning with the most traditional form, bound books. On the left wall, a long shelf invites viewers to thumb through 12 artist books ranging in subject and function. Mac Benson’s Flowers, Stones & Other Stolen Cherishables (2021) contains risograph prints and cyanotypes on fabric swatches depicting various objects listed on its last page. Titled “contents,”  and accompanied by specific locations, the implication is that each object was found by the artist, or someone else, in those corresponding locations. The indexical quality of the book’s contents, as well as the viewer’s experience handling the pages, highlights the tactile nature of print media and the intimacy thereof — both in Benson’s delicate crafting of the book and in the viewer’s reading.

Further down the shelf, Logan Larsen’s Catcher in the Rye (2020) also highlights our intimate relationships with printed and published media. Flipping through the copy, I discovered that the famed text itself has been removed. Only handwritten annotations in the margins remain, revealing the reader’s internal dialogue. While holding the books, I’m reminded of those hands which came before mine. It’s that physical trace that made the 20th century little magazines so intimately community-driven, yet they’re caged away, safe from touch, in the case right next to me. 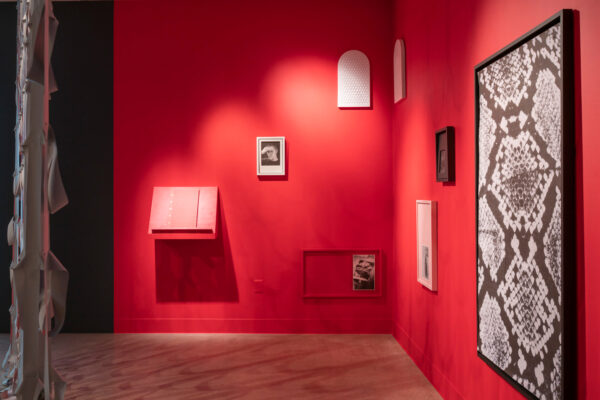 Connective Tissues ponders the peculiar state that print media finds itself in today. While it is a tactile medium that depends on physical engagement, institutions have historically negated these qualities by treating publications like this as archival objects that need to be tightly preserved. In the exhibition catalog, the curators note that “View magazine expectedly passed between literary and artistic figures belonging to a range of fame and celebrity, including Man Ray, Marcel Duchamp, and Georgia O’Keeffe.” Who wouldn’t want to preserve the lingering touch of such canonized legends? While the exhibition assertively does not aim to resolve this dissonance, it does effectively posit the tension between its seemingly democratic nature and its elitist treatment in educational and artistic institutions, such as the University setting for the exhibition itself.

Moving further through the space, Abby Raffle’s Self Portrait (2021), Caroline Padon’s Severity (2021), and Rachel Massey’s multiple bodies of work demonstrate how print culture can function as an intersection for artists working outside their own medium, be it photography or graphite on paper. According to Gray and Roden, they prompted artists to use their established artistic practices as a response to the form of print media, recalling publications, such as The Studio Zine, which allowed artists to exhibit their work beyond the physical, contextual, and financial constraints of the white gallery wall, and created a vast viewing network. Print cultures are capable of housing external modes of practice or exhibition, and they are also capable of expanding outwards from their more traditional forms into sculpture, installation, and time-based media.

Aishwarya Arumbakkam’s Appa walking (2020), a hand-drawn animation projected against a stark black wall depicts a figure — Arumbakkam’s appa — viewed from behind as they sway their arms and shift their feet to create the illusion of walking. Void of surroundings, there is no perceivable narrative, destination, or conclusion as the video is played on a repeated loop. On the wall to the left, the hand-bound book Appa walking (2021-2022) rests on a shelf, and Appa walking, drawings (2020) hangs above. All three works represent Arumbakkam’s interest in physical and temporal nuance that is developed further with each rendition. Arumbakkam created these pieces at the height of the pandemic when she was separated from her parents who were living in India. During Connective Tissues: A Conversation, the artist explained how sketching her father and capturing his movements made the distance between them feel less extensive.

Considering notions of time and its effects on the human body, Arumbakkam expressed that while the book Appa walking has a closing — a physical ending as viewers close the book — the film played on loop has an infinite quality that represents her unwillingness to accept her parents’ inevitable aging. Appa walking, drawings bridges the book and the film. The stacked tracing paper pieces refer both to the tactility of the book and the animation in the film. Developing the same subject across three renditions rooted in print media allows Arumbakkam to mediate her internal dialogue through the material, a core concept to print cultures. 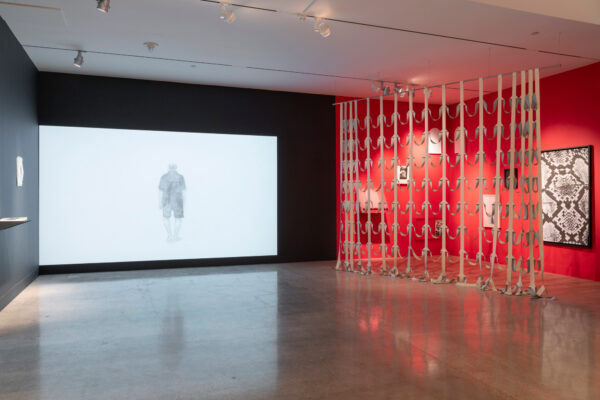 Conceived through their fascination with vintage artist books and little magazines, Gray and Roden describe Connective Tissues: printed & published as “first and foremost a love letter.” By exhibiting contemporary publication and print-based works alongside their twentieth-century predecessors, the exhibition demonstrates how their communal and collaborative legacies have endured despite their evolution in form. Drawing parallels between publication structures and human anatomy, Connective Tissues examines the historical necessity of publications’ role in building social networks that were once vital to artistic communities. Gray and Roden have made that sociality central to the exhibition by including artists from their own communal web and organizing social events, such as Connective Tissues: A Conversation and Connective Tissues: A Bookbinding Workshop, to directly engage their audience. In doing so, varying degrees of separation branch out to cast their web even wider, speaking to the ways that publication has built upon its social origins to develop into various forms of expanded media, including social practice. Two years into a global pandemic that was responsible for severing or weakening social ties, Connective Tissues offers an opportunity to reconnect with those we know and those we have yet to meet — from their community to yours.

Connective Tissues: printed & published is on view at the Visual Arts Center at UT Austin through March 12, 2022.