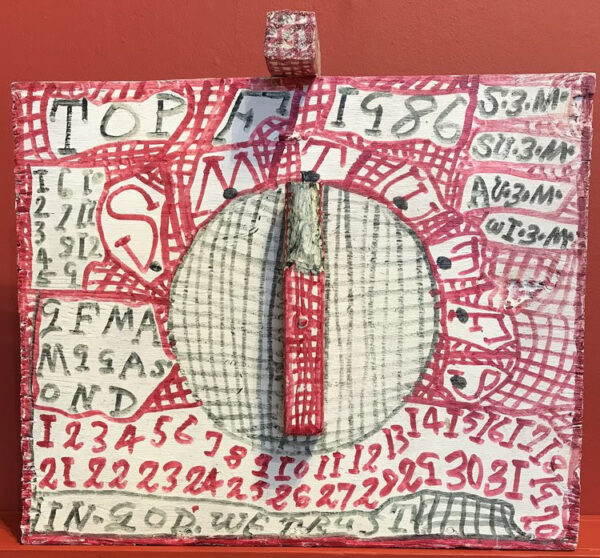 “We never knew Zebedee Armstrong, but have always been drawn to his work. We are excited to open a large survey of his pieces February 13th, 2022. Below is an excerpt of a wonderful biography of Zebedee written by our friend, Louanne LaRoche.

Zebedee Armstrong (‘ZB’) was born in 1911 in McDuffie County, Georgia, and lived in the town of Thomson, near Atlanta. From an early age Armstrong had shown a talent for constructing furniture, encouraged by his father, who gave him nails and bits of wood to use. Armstrong produced over 1,500 works, creating them in series and refining his formats.

The calendars consist of complex pathways and grids drawn in black, red and blue permanent marker and encircling his constructions. Armstrong called this effect ‘taping with time’. This linear wrapping or winding connects him to Afrocentric traditions. The process is meditative and illuminating, and in the process he apparently left his everyday state of mind, transforming his structures into spiritually charged icons.

Many of the objects are painted white and then transformed with words or abbreviations giving directions. He marked the top, bottom, side, front and back and he labeled inside, outside and on each insert or component. Months, days, years, both written and numbered, are wrapped methodically.

The visual power of this technique is astonishing. There is no disconnection, no beginning, no end. Armstrong ritually wove his marks, integrating past, present and future into the here and now.” 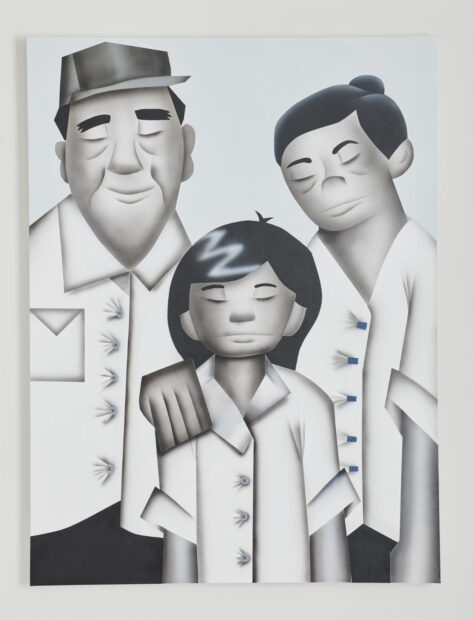 Loc Huynh, “Eldest Child (A Portrait of My Mother as a Child with my Grandpa and Grandma),” 2021, acrylic on canvas, 48 x 36 inches. Image courtesy of the artist

From Lawndale Art Center:
“The artist’s studio should be a generative space, one meant for growth, abundance, and nourishment. While these spaces may not provide physical nourishment, they can offer metaphorical food for an artistic practice.

Over these last six months, three artists who are part of Lawndale’s Artist Studio Program (ASP) — Ryan Crowley, Loc Huynh, and Jamire Williams — have taken care of their studio practice during a time when care is needed most. A time for self care and care for community health. It has been restorative to have a space dedicated to artistic making and practice and the fruits of these labors will be unveiled in the upcoming exhibition Taking Care: Ryan Crowley, Loc Huynh, Jamire Williams.

For nearly fifteen years, the ASP has offered annual residencies to three Texas-based artists working in diverse disciplines. With a monthly stipend, materials allowance, and 24-hour access to a private studio, Lawndale embodies a supportive space that is conducive for generating new work.” 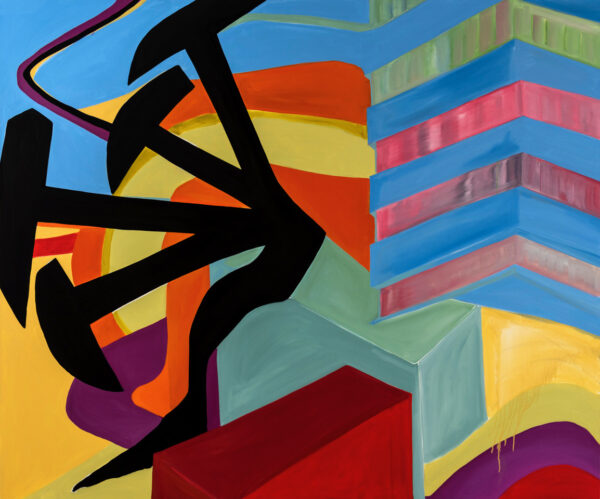 From the Latino Cultural Center:

“Organized by the Latino Cultural Center and curated by Silvia Benedetti, the exhibition Marian Ichaso Lefeld: Tierra de Gracia showcases a selection of large-scale paintings that represent the artist’s perspective on the Venezuelan Modernist utopia resulting from the 20th-century oil boom. Primarily using oil on canvas, the artist depicts abstract images through bright colors and geometric figures to evoke her memories of coming of age in Caracas. Her paintings recall historical images of oil wealth and exploitation in Venezuela, including the first plan of Caracas drawn in 1578, the National Theater built in 1905, and the famous oil well that exploded in 1922, El Barroso II.

Her recent paintings reflect on the contradictions of Venezuela–representing both its development as a modern state but also its social and economic collapse brought about by the past decades’ so-called Bolivarian Revolution. Throughout this exhibition, Marian Ichaso Lefeld conjures the memory–both historical and personal–of her home country, the Tierra de Gracia.” 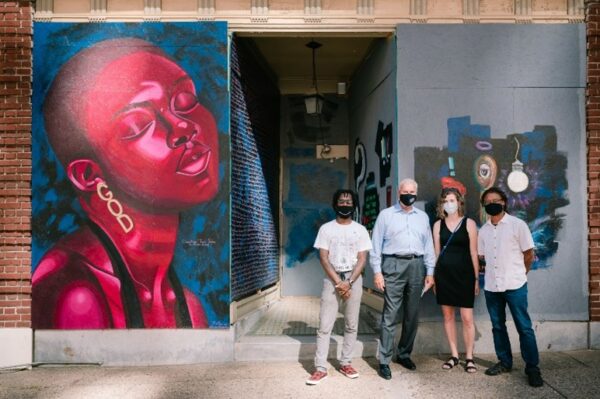 “Addressing the Moment: The Artist’s Voice” at the Longview Museum of Fine Arts.

From the Longview Museum of Fine Arts:

“The Longview Museum of Fine Arts is bringing in a unique set of works as part of its Black History Month celebration. Four large-scale paintings created by emerging Black artists in Wilmington, Delaware, originally painted and installed on the boarded-up storefronts of a main street in the city’s downtown area, will be on display alongside photos of the artistic process.

The boards went up on the windows all over Wilmington’s downtown area on May 31st, 2020, just hours after the national civil unrest over the murder of George Floyd. The works were commissioned by Jonathan Whitney and Eliza Jarvis of Flux Creative Consulting and Joe Del Tufo of Moonloop Photography. The three organizers sought to find a way to commemorate that moment in time and give Black artists a blank canvas on which to express themselves.

Artists James Wyatt, Jaquanne LeRoy, Jannah Williams, Erica Jones and E. Lize completed works that were on view downtown for several months and gained widespread press as word spread across the nation. ‘I wanted to show that the history of what we’re fighting for today goes back years and years and years,’ says Jannah Williams, the final artist of the four to create her work. ‘And we’re still fighting for it in different ways, but history is repeating itself as well.'” 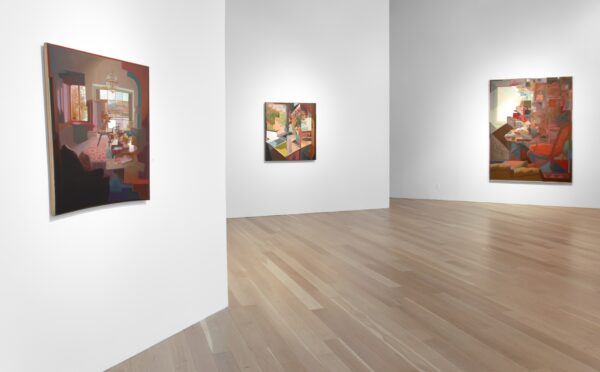 “Moody Gallery is pleased to present an exhibition of new paintings by Dan Sutherland. My Father’s Desk marks his sixth solo exhibition with the gallery. The artist states- ‘Historical influences range from Dutch Still Life, Analytic Cubism, Romantic Landscape Painting, and Post-Impressionism, each of which informs color, shape, space, and surface in varied ways. Some of my current works use a typical Western European domestic interior as a starting point. Art historical precedents collide with architectural and interior design magazine photography, injecting standard commercial imagery with dramatic instability and visual eclecticism. As such, my paintings fuse common pictorial conventions with graphic and painterly invention, offering something deeply familiar and, hopefully, profoundly strange.’”