Soundwaves: An Interview with the Moody Center for the Arts’ Alison Weaver 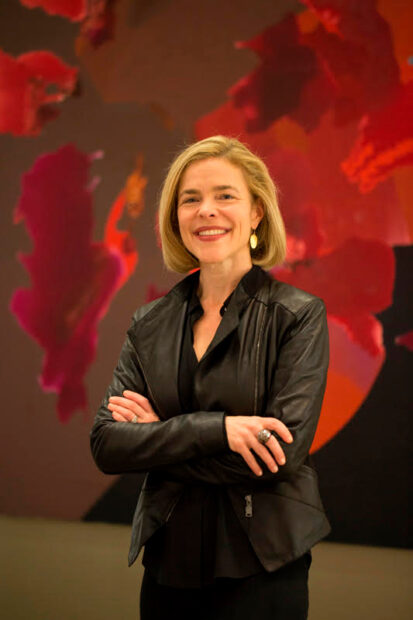 “…and that’s why I selected the title Soundwaves. A sound wave is a pattern of disturbance caused by the movement of energy as it travels outward from the source. We hope that these works will have that same ripple effect on viewers to think differently, or disturb conventional notions, or excite new ideas.”
-Alison Weaver

Five years ago, Rice University in Houston inaugurated the Moody Center for the Arts, a multifunctional space that has built a reputation for robust visual and performing arts programming. This year, to mark their fifth anniversary, Alison Weaver, the Suzanne Deal Booth Executive Director of the Moody, has mounted the interdisciplinary exhibition Soundwaves: Experimental Strategies in Art and Music. In a few words, we discuss the Moody’s anniversary and how the newly opened show acknowledges the arts center’s mission to provide a generative space for artists and thinkers operating at the intersection of the visual and sonic. 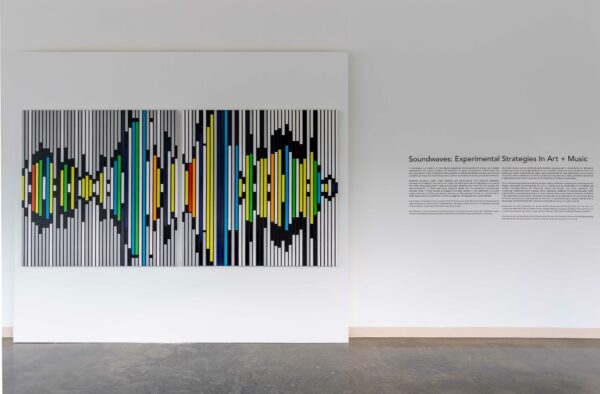 Caitlin Duerler Chávez (CDC): How does Soundwaves: Experimental Strategies in Art and Music commemorate five years of the Moody?

Alison Weaver (AW): Soundwaves is inspired both by the mission of the Moody, which is to foster interdisciplinary conversation through the arts, and also by the tenth anniversary of the James Turrell’s Twilight Epiphany Skyspace (2012), which is one of our premier works of public art here at Rice. One unique feature of the Rice Skyspace is its embedded speaker system and its colocation with the Shepherd School of Music. Over the last decade, it’s been the site of a lot of experimental music, dance, and performance that has been extremely generative in nature. It’s that spirit of inspiration and generation across the visual and the sonic that we wanted to celebrate with Soundwaves.

For the exhibition, I’ve selected a group of artists, all of whom operate across the aural and the visual. These are artists for whom sound is a very generative space, yet whose work manifests in a visual form. So this idea that if sound and art are a Venn diagram, we’re operating at the intersection of the two. That’s really how we think about the Moody, like a Venn diagram where we are in the overlapping space between art and ideas, which is where we hope generative conversations can happen. 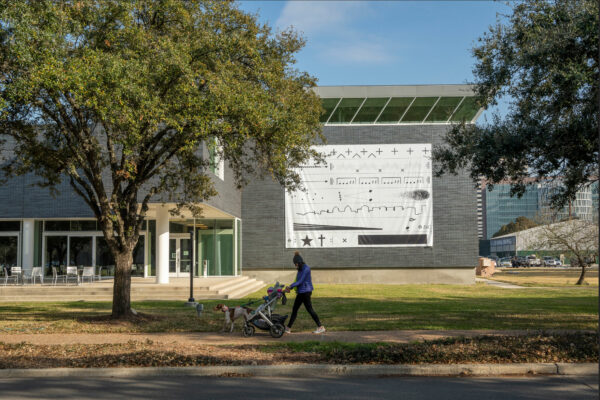 CDC: When did the idea for Soundwaves germinate for you? What were some criteria for artists selected in the exhibition?

AW: The idea came from thinking about the anniversary year, and what would be reflective of the Moody’s mission and spirit as an open-source platform for art and ideas. Ideally, if we’re celebrating it right, we’re inviting various voices, including scholars from Rice, artists, members of the community, and experts from Houston and further afield, together to experience and have transformative encounters with the arts. In this spirit of the anniversaries of the Moody and the Turrell Skyspace, and wanting to elevate those commemorations, this intersection of art and music seemed like the perfect way to do that.

For selecting artists, I started to think about artists for whom music is integral to their practice. In the show, you’ll see that these are artists who have dedicated their practice to considering intersections with music over a sustained period.

One example is Jorinde Voigt, a Berlin-based German artist who trained as a professional cellist and has a personal relationship with the history and structures of music. She’s interested in both structural underpinnings of musical scores, things like the structure of a Baroque fugue, but also in the phenomenological impressions that music can have on viewers. Her works consider how music and things that are visual impact the body in a way that’s atmospheric. In a new body of work made specifically for this exhibition, she refers to being inspired by a German philosopher named Helmut Schmidt, and the way in which he thinks about bodily response to music and atmosphere. 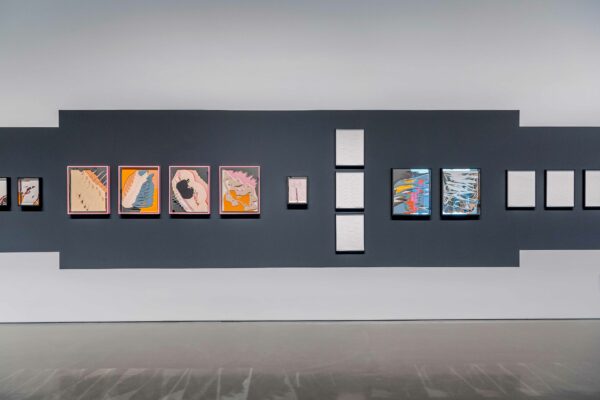 CDC: I remember the Voigt show at the Menil Drawing Institute and didn’t realize she was a cellist at the time, but I can see a connection with her orchestral background, such as the big gestural effects she achieves in her drawings.

AW: We also thought it would be great to give visitors a chance to see other examples of an artist’s work. Voigt’s work at the Menil was a fantastic site-specific wall drawing. Visitors who saw her at the Menil can also see this new body of work now at the Moody. Another international artist who has recently shown in Houston is Anri Sala, who showed his installation Time No Longer (2021) in the Buffalo Bayou Park Cistern.

Other artists in our show are closer to home, including Jason Moran. Jason is a practicing jazz pianist and performer who has been making visual art for the last several years, and we’ll be showing two brand new works of his that haven’t been shown before, which are made using modified piano keys. He puts pigment in his piano and then inserts this gorgeous Japanese Gampi paper, and when he is performing, it’s a visual output of his musical performance. And again, it’s that generative intersection between the oral and the visual. This could happen either as a musician coming to visual art or visual artists coming to music, but we hope that others will be inspired by this diverse set of works through which you can think about things a little bit differently. 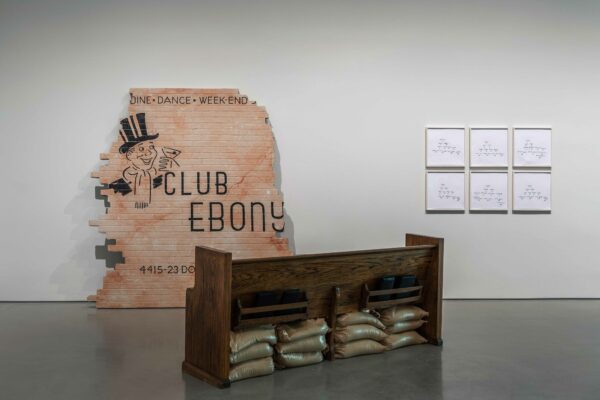 CDC: I am reflecting on the Houston exhibition roster over the past couple of years, and there are several exhibitions, especially at the Contemporary Arts Museum, Houston, that explored this intersection between music and visual arts. Do you see Soundwaves being in conversation with these Houston-based shows that are looking at sound and visual arts, or do you see them belonging to a larger national trend?

AW: Absolutely. I think that it’s been an interesting exploration these last several years. The Slowed and Throwed show was an extraordinary exhibition and of course Dirty South was stellar. Those are two exhibitions that have specifically referenced the history of music.

I view our show as one that ties into that particularly through some of the works that, I would say, express sonic agency, a term from a theorist named Brandon Labelle. He wrote a book called Sonic Agency (2018), and the idea is that sound can indicate forms of social and political resistance. We have work in the show by Nick Cave, his soundsuits, and Charles Gaines, an artist whose entire career has often been centered around a rule-based practice; through musical work, he very often brings attention to injustice.

And these are works that all reference the idea that music can be a means of sonic agency, and calls into question those histories. I think the historical element is really interesting, and this idea of bringing attention to the way sound can play a role in social conversation, and social justice.

CDC: I have to admit I have not visited the Moody since January 2020 (pre-pandemic) when I attended an event titled A Night of Philosophy and Ideas. It was such a dynamic space with a lot of different programs happening at the same time in all the space’s different galleries and rooms. Could you talk more about the Moody’s space and the types of programming offered to the public?

AW: We have this beautiful 50,000-square-foot building by Michael Maltzan, which is truly multi-functional. It has everything from galleries and a black box theater to classrooms, maker spaces, and even a small cafe. We have visual art exhibitions, but also performances and opportunities to hear from scholars and experts and to contribute to those conversations. So A Night of Philosophy and Ideas exemplifies that kind of programming that activates the entire building. We had films in the theater, dances in the interstitial spaces, exhibitions in the galleries, and TED-style talks in the classrooms.

In that way, we hope to bring people to converse and make this cross disciplinary vision come to life. It’s easy to say the word interdisciplinary, but what does that mean? For us, it means inviting people into the building itself to experience ideas and things differently, and have an opportunity to respond.

During COVID, that has all been a little less in person. We’ve had a lot of online programs as we have all shifted to the digital universe. And I hope that going forward we will very much have a combination of both digital and some in-person, socially distant, safe, interactive performances, very much enabled by the architecture of our space, which is very unique in Houston. 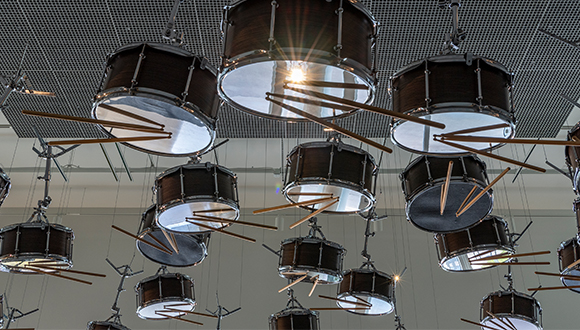 CDC: The exhibition roster includes local artists, as well as international and Indigenous perspectives. How important was it for you to take a global approach in curating the show?

AW: It was absolutely critical. It’s both a reflection of Houston as an international city and Rice as a diverse, international university. It’s also an amplification of the thesis that this generative space between art and music is global in nature. It’s not just exclusive to one geographic location or one culture. In our small way, we have limited exhibition space, of course, but we wanted to illustrate that through the diversity of artists, backgrounds, and media. There’s a variety of media — everything from a video by Trevor Paglen, an immersive installation by Anri Sala, and a two-dimensional work by Idris Khan, a London-based artist. We really wanted to show how [the exhibition’s concept] is reflected in a variety of media by artists from different backgrounds, which is also reflective of our experiences, both at Rice and in Houston.

CDC: Why was it important to you to include works in the show that aren’t necessarily making a sound but are in conversation with music and sonic impulses?

AW: It really ties back to that consideration that sound can be generative to the intersection of art and ideas, even if it’s through silence. For example, the artist Christine Sun Kim was born deaf. Her interpretation of sound is as a person who is non-hearing in a hearing universe. A lot of her work is really as an activist for the deaf community. So she’s translating her scene and her felt world into a visual format, commenting on sound and silence and how important both of those things are.

It’s really about digging into these kinds of ideas, more than, let’s say, tracing the history of sound art, which is a really interesting field and would be a fantastic show, and has been done before by MoMA and others. At the Moody, we are more interested in that generative intersection rather than tracing a given history of a certain field.

Soundwaves: Experimental Strategies in Art and Music is on view at Moody Center for the Arts through May 14, 2022. The Moody will host a conversation with architect Michael Maltzan on February 25 from 5:30-6:30 PM. On March 5, from 8-10 PM, the Moody will celebrate its 5th birthday with a free, outdoor concert by the band Sir Woman.