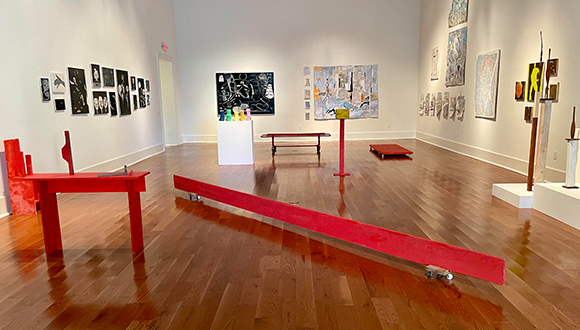 A hero-less horse greets you at the entrance of Nick Barbee’s Undeniable, now on view at the Galveston Arts Center. Finally (2020) is a black and white tribute to the gray area of history, at a time when imperious bronze statues (and the horse they rode in on) are being torn from their pedestals. The painting is one of many sly socio-cultural critiques in this show, yet its title seems to suggest something of personal note for the artist, who has lived and worked in Galveston for the last decade. Undeniable is a 10-year survey containing five bodies of work from this time period— as well as a miniature museum of personal history, and a set of sock-adorned feet. It is also the artist’s first solo show in Galveston. (Finally.) 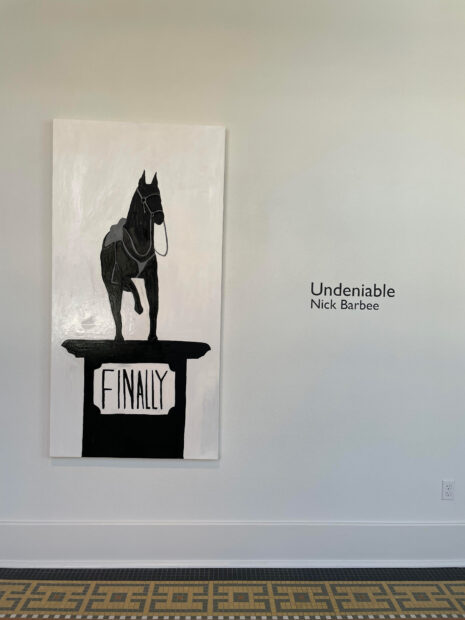 Famous figures from the not-too-distant past show up in strange and amusing ways throughout Barbee’s works, an interchangeability of names and known facts twisted just enough to riff on the arbitrary nature of history’s retelling. The multi-piece installation Marfacello (JefferJudd) (2016-2017), for instance, settles across the gallery floor (and wall) like a putt-putt course of red wooden objects; its Monticello-Marfa connection is mostly lost on me, even with a gallery-issued illustrated map in hand.

Luckily, Marfacello’s horizon finder aims to orient viewers as they embark on a journey of the mundane. There are indeed some identifiable pieces to this puzzle — chairs, desks, a bed, a bench — but the most striking (and befuddling) item ends up being an elongated bundling board on wheels, which diagonally divides the center of the floorspace. (In Colonial times, I am told, bundling boards separated unmarried partners in bed during a key phase in courtship.)

Barbee’s puritanical partition is a nice tangential touch among these various “tinkerings,” as he calls them, each one drawing some kind of myopic comparison between Donald Judd and Thomas Jefferson: two manly men who conquered the American West, each in their own way, à la Manifest Destiny.

“Jefferson took a grid and put it over the maps of the Northwest Territory — he put literal squares on the West,” explains Barbee. “And then there’s the story of Judd camping in Baja…he took out a map of the U.S. and started circling empty areas, and in the middle of one of the circles was Marfa.”

It would seem the bundling board is an extended metaphor for the annals of history, and its myriad of strange bedfellows; the way stories get repackaged and sold, even as scholars and skeptics try to separate them out. There is no clear divide down the middle once competing versions start to cuddle. 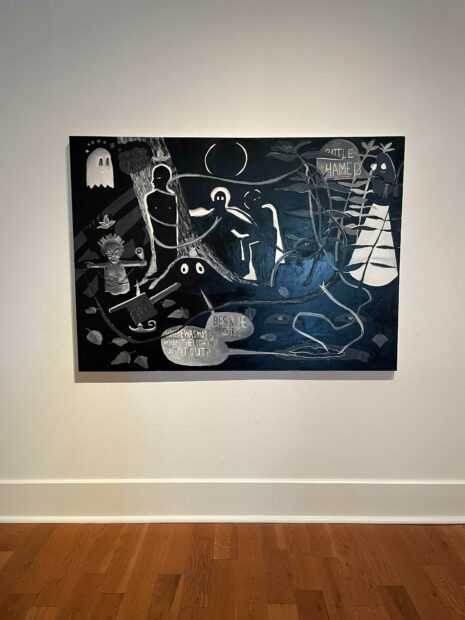 Take, for instance, Thomas Jonathan “Stonewall” Jackson, Robert E. Lee, and Martin Luther King, whom Barbee delineates as an unlikely trio in a series of Halloween-y oil paintings titled Ghostbusters (2020-2021). These works shine a flashlight on the little-known LJK Day (Lee-Jackson-King), recognized in the state of Virginia from 1984 to 2000 as an annual holiday to honor all “defenders of causes.”

Barbee, who grew up in Arlington, Virginia, never makes light of America’s painful past, or its collective post-trauma. But from a young age, there was a sense of liminal space between the North and South for him. He tells me that while growing up, he and his family often visited nearby Civil War battlefields, now mostly parks, and learned all about “Lost Cause stuff”: “It was a political point of view rather than the truth, and it made me understand history as a process and as an abstraction — that’s the thread that carries through in my work.” 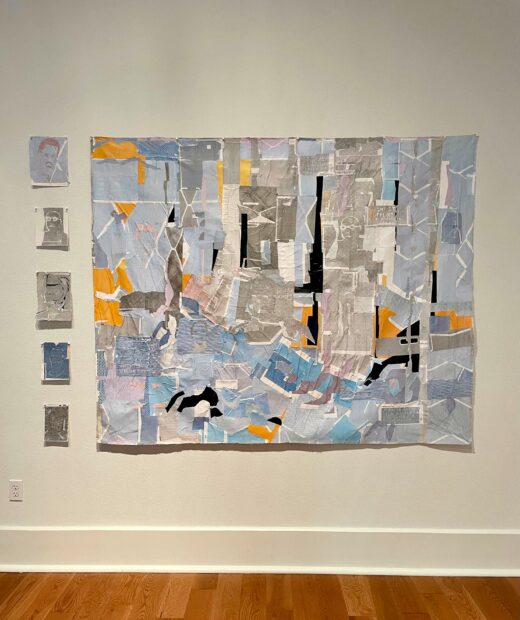 Believers: Old and New (2019) gets at this historical process and formal abstraction with a series of portraits featuring a bevy of U.S. domestic terrorists: the D.C. Sniper, Unabomber, and Eric Rudolph, who detonated an explosive device at the 1996 Summer Olympics in Atlanta, Georgia. (Other pariahs of note include Charles Knight, who hid in the Maine woods for 27 years, and Agafia Karpovna Lykova, who was raised in the remote taiga of Siberia, under the auspices of the Russian “Old Believers” sect. (Lykova, now 77, continues to live in near-total social isolation.)

“I was thinking how it feels like the world is ending, and was looking at people who have separated themselves from society — both hermits and terrorists,” says Barbee. “They go hand in hand. I was living in New York City during 9/11, but I had never been more terrified than the D.C. Sniper. Someone got killed at my Home Depot in Virginia.”

Believers: Old and New contains several smaller works with titles alluding to the biographical details of these various figures; a large-scale composite on the gallery’s back wall ties their stories together through a complex collage of security envelopes. Indecipherable text and barely-there faces begin to reveal themselves while staring long enough at the mostly blue and gray interiors of envelopes, cut out and intricately fitted together. It’s hard to say what you’re looking at, but Barbee assures me all the information is in there, if you want it. “You’ve just really got to work for it. Maybe that’s a dick move on my part.”

This back-wall composite (prettily patterned like a Ted Baker shirt) is a bit like Eric Rudolph himself, who hid in the North Carolina mountains for years while the FBI tracked him down. There were times, Barbee tells me, the feds were within five feet of him. (Incidentally, there is a sculptural work in the exhibition composed of five plaster feet, titled 5 Feet (2011).) “I like this idea of things that are lying underneath, things that are hidden within the everyday, which is why I used security envelopes.” 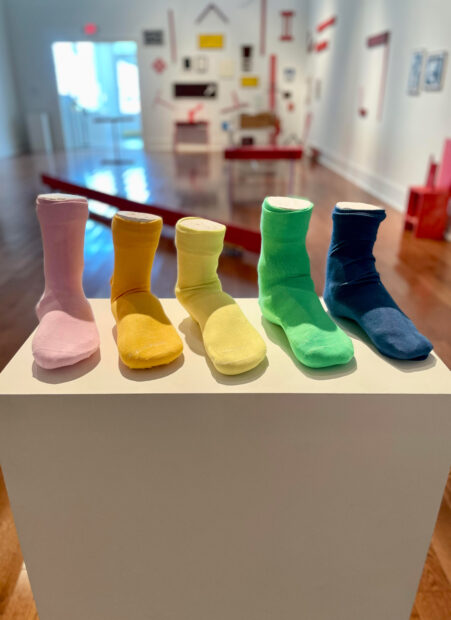 I ask Nick how living in Galveston — a storied port city with its own fair share of historical twists and turns — has affected his practice. He is quick to point out that living in a place off the edge of the map allows him to do things with his art that maybe he couldn’t do elsewhere. His studio is located in an old church, for instance, which is rumored to contain buried treasure. Across the way is where New York real estate heir Robert Durst lived incognito for years, suspected for murder back East, before killing his cranky neighbor next door. (Durst confessed to cutting up the body and tossing it into Galveston Bay, one bag at a time, but they never did find the head — some locals believe it might still be in that house.)

Wild rumors aside, Barbee, who teaches life drawing at the University of Houston and works for the Galveston Historical Foundation, says parsing through the area’s history and meeting with trained historians keeps him honest in his own work and research. “I know that I’m not making history. It’s related to history. It’s a critique of history,” he says. “But it takes me out of my own point of view with my own history and lets me buy it back.”

As for all the intrigue — historic or otherwise —just waiting to be discovered in this 10-year survey? It’s undeniable.

Nick Barbee: Undeniable is on view at the Galveston Arts Center through April 17, 2022.

That title is fantastic, fitting for an excellent show at GAC. Bravo all!