When first learning French, many language teachers tell English-speaking students to use cognates, words that look the same and have the same meaning in both languages. However, there are also faux amis, “false friends,” or words that look the same but have different meanings. Noctambules is one such slippery term. In French, it means someone who is up all night, a night owl; in English, however, the expression noctambulist refers to a sleepwalker, unconscious of their nocturnal physical activity.

In her show Noctambules at the Blaffer Art Museum, French artist Caroline Mesquita’s sculptures live beyond their stationary display in a nighttime dreamscape, coming to life in a stop-motion film as slithering and clunking somnambulists. Below is a brief transcript of my conversation with Mesquita’s about her artistic origins, subject matter, her show at the Blaffer Art Museum, and forthcoming new projects. 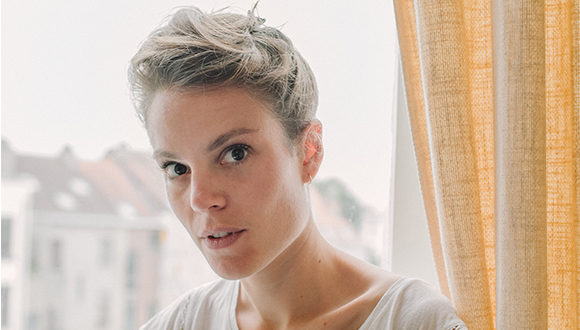 Caitlin Duerler Chávez: Can you briefly describe your journey as a sculptor, and the initial spark that led you to pursue a life as an artist?

Caroline Mesquita: A lot of my peers from art school were interested in painting and sculpture for a long time, and that was not the case for me. Actually, I wanted to become an audiovisual technician, someone who would edit movies.

I was not advanced enough in the natural or technical sciences to attend those lycées (French high schools), and I chose an art school. At the same time, I had a teacher (for one year) who introduced me to different artists — which was a revelation to me. The first artists I discovered were the Nouveaux Réalistes, like Yves Klein, Arman, Daniel Spoerri. That’s what drew my interest to artmaking and how I entered this world. 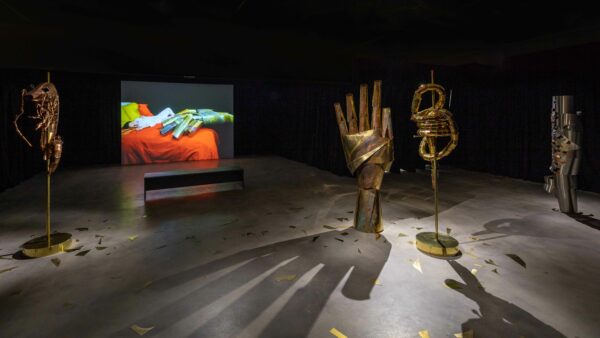 CDC: How did you begin working with sheets of metal, like bronze and copper, to construct your sculptures?

CM: I started working with metal in art school. I started with tubes first, not with sheets. For me, I was using the tube as a line, like drilling into space. Later it occurred to me that I could use sheet metal like a sheet of paper. At the time, I was making models of my works using paper and I thought: “Let’s try to use them [the sheets], just like I used the metal tubes to create volume.”

What I really like with metal is that you can always transform a piece of metal. You can always cut it again, weld it again, melt it again, you can transform it forever. With wood or stone, it’s impossible to fix it if you make a mistake, and it can no longer be used.

For me, I always want to be able to make something new from my sculptures in the future. I don’t like the idea that once the sculpture is finished, it’s done, and it’s here forever. I like the possibility of using it for something else. Like something living, I want my sculptures to change and evolve. 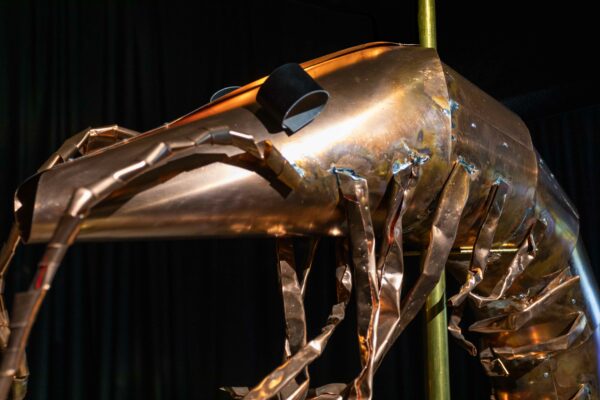 CDC: You have been exhibiting sculptures and installations since 2013, with the subject matter of primarily human figures. However, you have also constructed sculptures of cheese (Le Festin, 2020), motorcycles (The Ricard Prize, 2017), cell biology (In Vivo, 2020), shrimp (Le Festin, 2020), etc. Can you discuss your original interest in expanding your subject matter to include other things, such as food?

CM: Actually, all these subjects are really linked for me. They all begin with the human figure.

Le festin (2020, Passerelle Centre d’art contemporain, Brest) had sculptures of prawns and cheese, and was developed from the aforementioned show in Sao Paulo where I was talking about the inside of the human body and becoming interested in what gives energy to these bodies. Thinking through that, I decided to make sculptures of food.

Now, I am still interested in continuing to make sculptures of humans, but have also become interested in sculpting animals in order to embody all living things, both humans and animals.

CM: I think it’s really linked to the first question when you asked why I started using metal. I really liked this idea that you can always transform an object into a new one, change its identity, and to a certain extent, its worldly presence, forever.

With the metal sculptures, I could make sounds or I could make prints from the surface oxidation on the brass and copper. From the beginning, I had this idea to always extend the existence of this material, its visuality and the sounds it could make. One way to do this was to use paper to make prints from the surface of the sculptures, or to use the chemical reaction of the oxidation as a color.

I was making these human-sized figures because scale is important to me. This idea to create stop motion animation films came to me while I was working in a studio in Berlin. I spent like two-and-a-half months working on this group of 13 human-size figures for Art Berlin Contemporary (2015), which were only installed for three days. Back at my gallery in Berlin (carlier | gebauer), the storage of these human-sized works created new groupings that reminded me of a backstage at a play. This idea further developed into considering the lives of the characters after the show. The films came about to animate these sculptures and communicate something about their lives outside of the single moment of visibility they receive in an exhibition, for example, which is something that is rarely talked about. 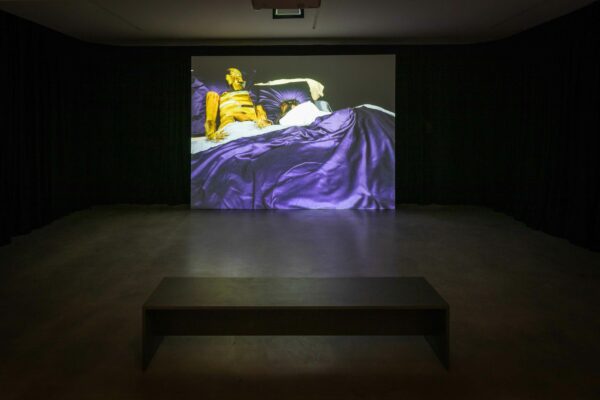 CDC: The exhibition design of Noctambules feels theatrical. The black velvet curtains and the darkness of the room with spotlights highlighting the reflective qualities of your materials creates a dreamlike atmosphere to compliment the video. Additionally, the installation seems performative — viewers walk around the sculptures and dodge gold confetti on the floor. Can you talk more about your influences for staging these sculptures, your mise-en-scène? 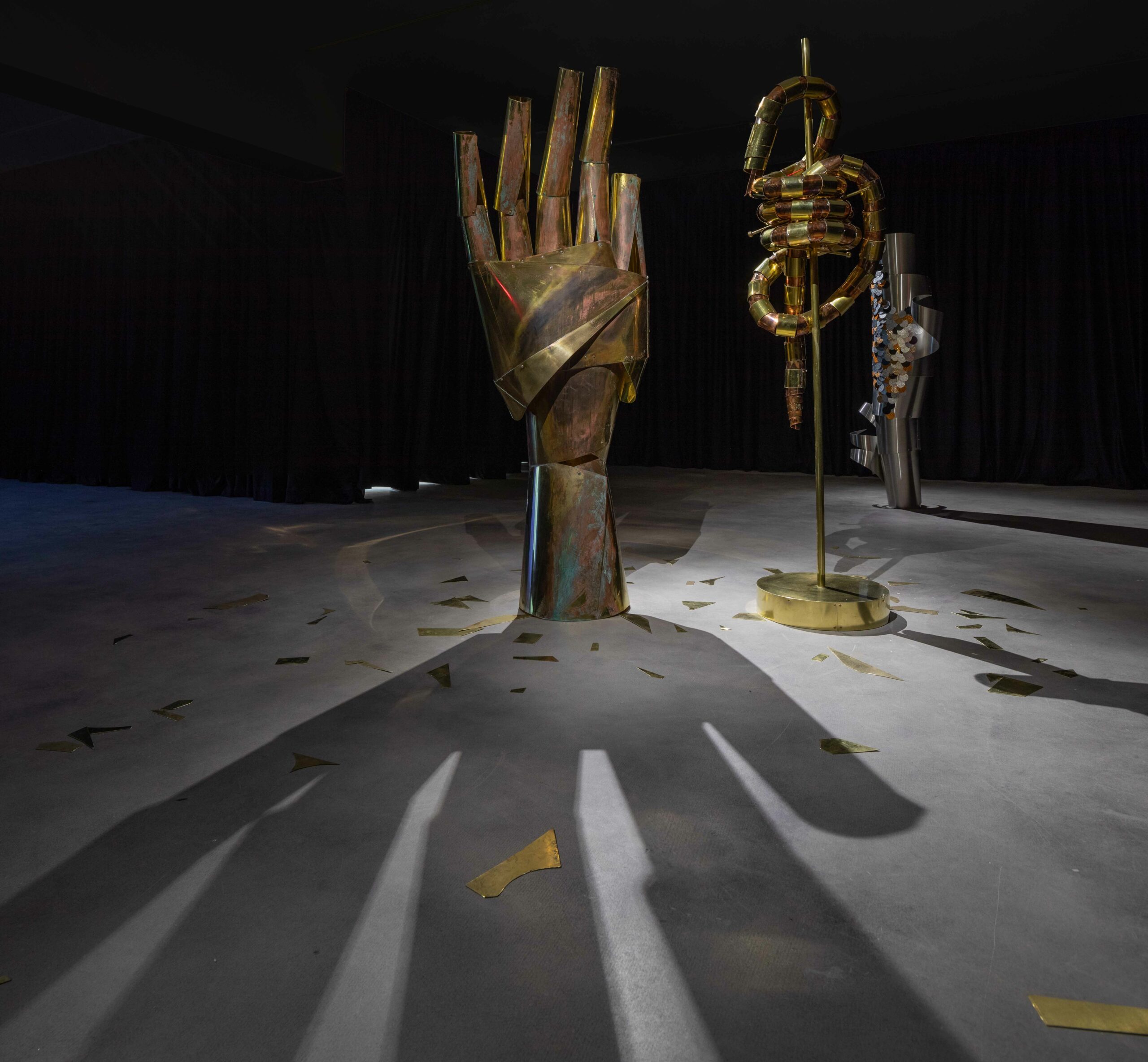 CM: That’s exactly what I wanted to create, this atmosphere of being in a dream, somewhere you can’t understand actual space, but a space out of time.

Art, for me, is to create this moment outside of the world, to create different sensations.

Since I began using both sculpture and film in my installations, I have been designing these environments where people can really feel something, or feel like they are participating in the installation.

The staging of Noctambules is influenced by the video, even though visitors are not in the same scene as what is happening in the video. I wanted to design the exhibition to create the same atmosphere as the video. It’s like a dream, which is a transformation of memories and imagination. You have similar figures in the film that are on display in the show, like the big hand and the snake, but they are different on display as sculptures. Even in the video, I worked with an actress that looked like me, playing with this idea of figures that are the same forms but have different presentations whether they’re on display or in a film.

CDC: Could you talk more about your process of making the film score and the percussive sounds of the moving sculptures influencing the sound design? 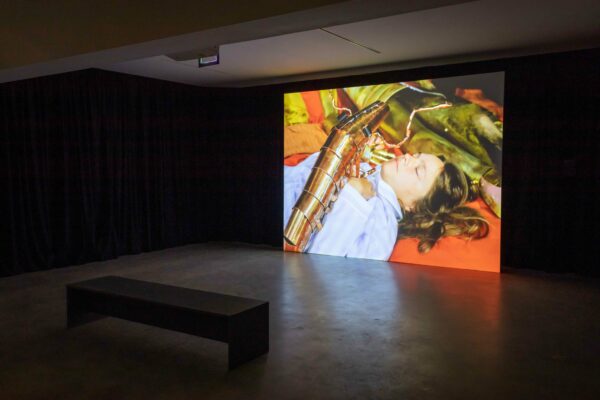 CM: In the video for Noctambules, I worked with sound designer Eduardo Patricio, who I worked with in a previous video that was shown in Sao Paulo (In Vivo, 2020). He’s really good and really understands my vision. Before working with him, I used to make all the sound for my videos, and used my sculptures as instruments. In the beginning of making these sound scores, I even created my own instruments, like flutes, from pieces of metal tubes from previous works, and drums from older works. Then, I started to use my sculptures as instruments. In the act of touching metal, you start to hear sounds, so I started to record these sounds.

I used to produce my own soundtrack for the videos by using the metallic sounds to create an abstract atmosphere. I also wanted to convey this feeling of the sculptures developing a language from their metal body, like how birds communicate with each other. I expressed these ideas to Eduardo and we were able to create the soundtrack.

CDC: You have several solo exhibitions coming up later this year in Rome, Neuchatel, and at Le Parvis, in Tarbes, FR. Could you elaborate on the themes of these upcoming exhibitions and the kinds of works you are producing for them?

CM: For the show in Rome, I am showing metal faces at one of my galleries, T293. At the entrance of Noctambules, there is this big head on the wall which was one of my first metal wall pieces. I decided to develop a series of big faces from animals and humans for this show. 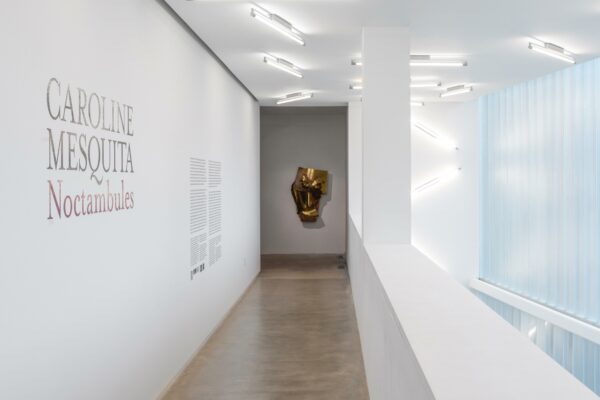 Caroline Mesquita’s exhibition Noctambules is on view at the Blaffer Art Museum in Houston through March 13, 2022.