Linnea Glatt’s kinetic sculpture, Harrow, located in Lubben Plaza in Downtown Dallas, was recently reinstalled following an extensive off-site restoration. Commissioned by The Belo Foundation as part of the media corporation’s sesquicentennial celebration, Harrow was installed by Glatt, in collaboration with James Cinquemani, her husband, in 1992.

Drawing inspiration from her childhood on a farm in North Dakota, Glatt’s conical sculpture is reminiscent of an agricultural disc harrow. The piece, constructed out of Cor-Ten steel, is over 15 feet long, 8 feet tall, and weighs approximately 6,000 pounds. Powered by a 1/40th horsepower motor, it completes one revolution around a 30 foot circular sand bed every 24 hours, leaving behind concentric marks in the earth.

“It is not immediately evident that Harrow is moving until you spend some time with it,” said Glatt. “You may notice a clump of sand falling from a fin, or the realization that the piece was here and now it’s there.” 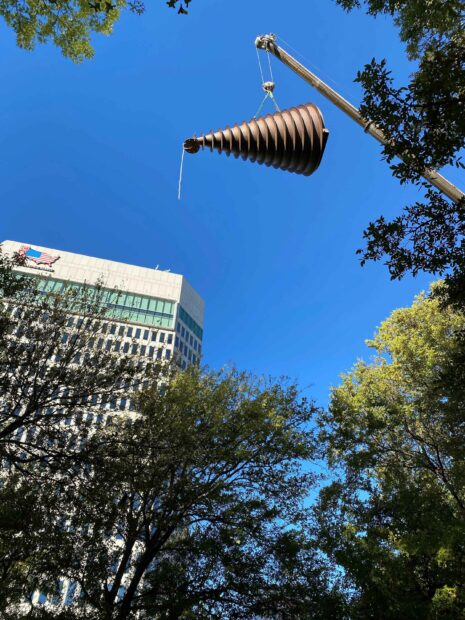 The sculpture stopped moving in July 2019. After a series of discussions, Glatt, along with Cinquemani, removed the piece in July 2021 to begin the months-long restoration process in their studio. The work included a complete overhaul of the sculpture’s electrical components.

Harrow was reinstalled in Lubben Plaza in November of 2021, along with its accompanying seating. Funding for the restoration was provided by Parks for Downtown Dallas and an anonymous donor. 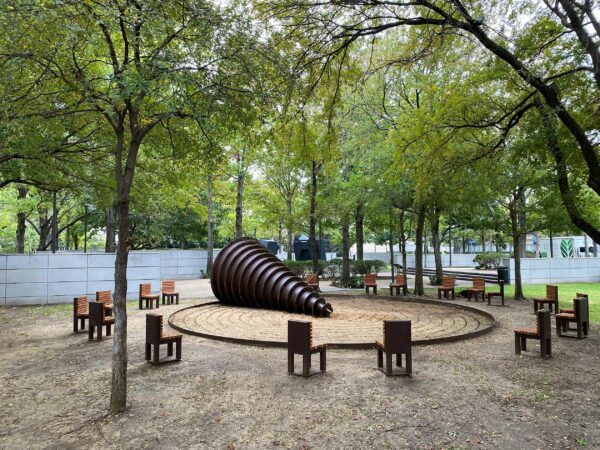 Regarding the completion of its restoration, Glatt said, “Of course, it means so much to me that the piece is now rolling along once again. After being at the site recently in its departure and refurbished return, I was very heartened that people are still embracing and curious about the work. Its voice is still being heard and now Harrow has the potential to have a life beyond our own.”