Meditation of the Discarded: an Interview with Lauren Winchell Bechelli

Lauren Winchell Bechelli firmly believes in the impossibility of specificity. Her artworks are undecipherable composites of old ideas made new again. Iconic images and constructive materials are stitched, dipped, and smashed into abstraction, rejecting the notion of an individual, singular process by embracing the universal and lineal.

In Cullet and Pitch, on view at Austin’s Goodluckhavefun Gallery, Bechelli invokes this condensed oneness by employing discarded materials — including canvas cut-outs and colorful scraps from fellow Austin artists — to create paintings that have ruptured on the surface, revamping a narrative that openly borrows from all sources. What Bechelli calls “a celebration of the discarded.”

Lauren and I had a chance to speak about her current show, the nature of her practice, and why, in the very near future, she plans to double down on karma with ink pulled from air. 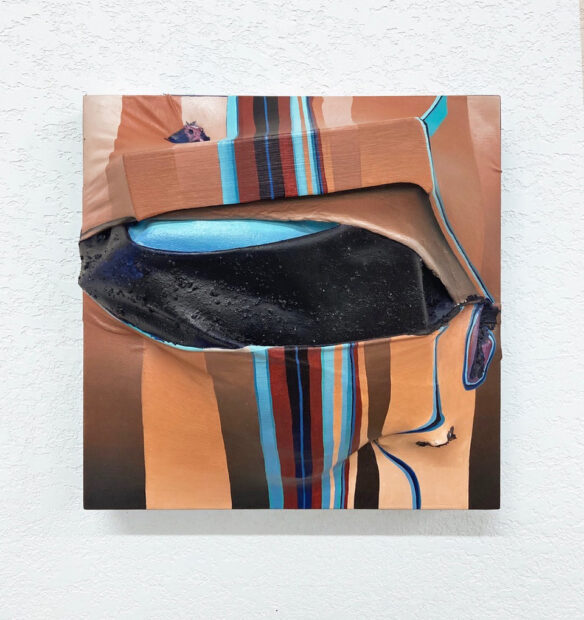 Barbara Purcell: The title Cullet and Pitch has this sort of farm-to-table allure. How did you come up with it?

Lauren Winchell Bechelli: I was thinking a lot about how you’re stuck in whatever time you’re from. Yes, it’s recognizable as a trendy bar or restaurant name, but there are multiple layers to it. This idea of “cullet” being a recycled material [broken glass], many little pieces of something smashed together with their own history — and not knowing what the lineage of that history is. And “pitch” being whatever trajectory you want it to be read as, or the multiple trajectories of tossing all these little pieces. I was also thinking about pitch — the oily black product, which I used to dip some of the pieces and frames in for this show — like a sludgy slime that has to do with degeneration of biological material. A compost-y death. I like the idea of how you might want a thing to be interpreted even if it’s not necessarily inherently within the product itself, or the art itself, but rather the way you frame it.

BP: This is a solo show, though you happily admit to using discarded materials from other Austin artists throughout. So in a way, is this a small-group exhibition?

LB: It all goes back to the idea of nothing being new and paying homage to the lineages of ideas and people and experiences that have come before you. Understanding yourself, not necessarily as this individual coming up with unique ideas, but rather a person who is responding to the environment around them — making sure we’re seeing ourselves as a network, as opposed to alone in this world. I like that shift in framework: from solitary individual, to novel idea maker, to piece of network that functions together and actively pays homage to its other pieces. 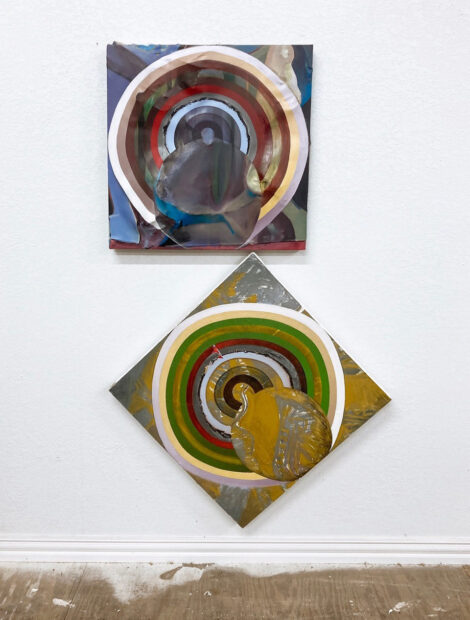 BP: Of the sourced images and materials found in these works, you mention using film footage of Sigmund Freud’s office, tapestries from your grandmother, and Jusepe de Ribera’s 1631 painting, La Mujer Barbuda [The Bearded Woman]. But none of these references are obvious, at least not to me. Cleaning Freud with A Teacup, for instance, looks like two bullseye paintings…

LB: So I went to a gallery in Houston that was showing a video about the cleaning of Freud’s office after he died. They created a museum out of it so people could go visit this weird taxidermy of a space frozen in time. I liked the idea of taking just a fragment of that, so you could never recognize it other than the title. Taking a picture of a still, of a moving video, of a thing that used to have a use, and now has no use other than being a historical monument, and making a painting of that. I took the color information out of it to simplify it, and used yellow and silver — thinking of sulfur and mercury — sort of elemental aspects of really old ideas about paintings, and mushing those things together. Then pairing it with another painting that was more of a sculptural piece that had been wrapped around rocks and had retained its own physical history. And putting those two things together to unify them in their next step in history. I watched all of these things line up in unexpected ways: new connections between things that didn’t necessarily “belong” together and having them grow together into something unified.

BP: Ok, I see that. So what about Grandma?

LB: For Miriam Snow (2021) I took a photo of a tapestry that my grandmother wove, which was hanging in my parents’ house, printed it, then constructed the armature out of canvas — again, playing with the impossibility of knowing the history of an object. It’s wrapped around a whole bunch of things that you’ll never know. And then dipped [using a sludgy, slimy hydrographic dipping process] into the image of my grandmother’s tapestry, which gets totally destroyed in the making, but [allows] my personal history to remain intact through this game of telephone. All the information gets distorted and degenerates into a loss of information through translation. 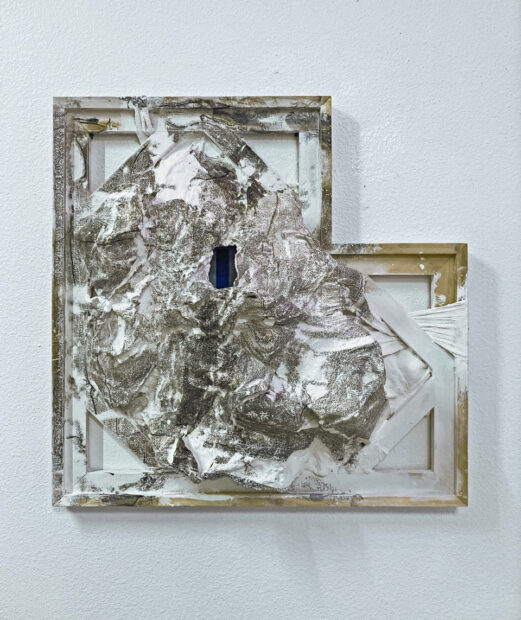 BP: Miriam Snow (2021), like many of your works in this show, has a ruptured quality — a pressing out from the canvas. What does this mean to you?

LB: It’s a disruption of time and place because nothing is neat and tidy and linear. It has to do with acknowledging the not knowing. We don’t have to put things together in this really packaged way — that’s something my generation has always struggled with — this idea of everything being perfectly presented and placed on a shelf. It’s not how the world functions. Not only is it disingenuous, but it’s damaging to try to force things to be a way that they’re not. Fundamentally I want to allow things to be the way that they are, and echo nature in how it functions. It’s a loosening of control and letting go of your grip on intention. When I invite other artists and objects into my work, I’m staying open to what I might connect to. I find it useful to believe that there’s a sort of unity in the human world as well as the nonhuman world. It’s this flattening of the hierarchy between what can and cannot communicate. 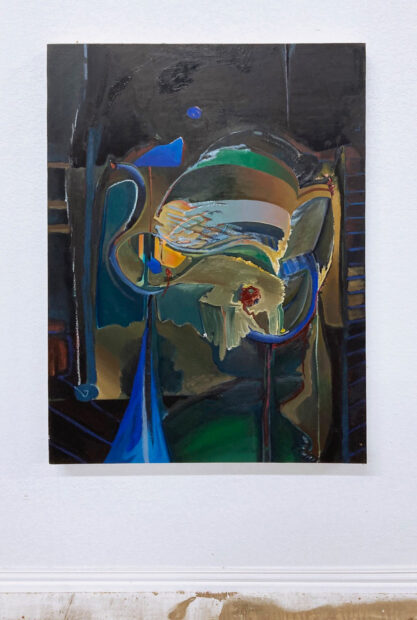 BP: Your painting La Mujer Barbuda 2018 (2021) is a heavily abstracted version of the 17th-century oil painting of the same name, which depicts a bearded woman breastfeeding her child. It is an unforgettable image, but it’s all but unrecognizable in your own version. Why did you make this choice?

LB: I went to the Prado Museum in Madrid and they didn’t allow photos, so I made a bunch of sketches of the original painting. Inherently you lose color in a sketch, so it already lost half of its information in that translation. I then took the sketches back to Austin and decided to use a photograph of a river for its own color information to distill a series of stripes and gradients, and input that into the drawing composition. So even though the painting was recognizable at one point, it was getting abstracted and then it went through another series of five or six workings, over the course of two and a half years, until it became something entirely different.

BP: Is it common for you to return to paintings and rework them?

LB: Yes, it’s a constant struggle of whether or not to leave something because we are always changing. And so the paintings feel like they’re decades away from me, or so far from where I am now. You can always start something fresh, but I like the idea of being loyal to a painting and continuing the process over and over and over. Having this history with the thing. And also this notion of no new materials, which is both in the conceptual idea sense and the physical material sense.

BP: At what point did you adopt this “new old” philosophy?

LB: In high school I went to a classical drawing and painting program, and in undergrad I continued that same lineage. When I got what I needed out of it, I quit painting. But at some point I realized I was missing something. For other people, that thing might be religion, but for me art was the only thing that could touch that. So learning what I was missing allowed me to kind of condense what it was that I sought. Now, the process I’ve developed has turned into a daily practice. It’s not necessarily that I’m in my studio all the time, but it’s changed my daily interaction with the world. 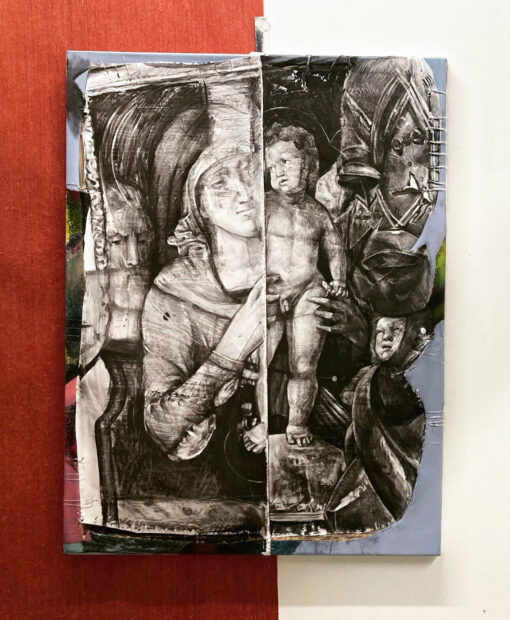 LB: Speaking of religion, your current show features two paintings inspired by Giovanni Bellini’s Madonna and Child. Why do you suppose this theme came up?

It’s a mystery to me also, which is the beauty of the way I work. It’s all about allowing impulses and desires to bubble up to the surface. I was attracted to all of these images for many reasons, and I was trying to embody the people in the images as well as the people who made the images. Inherently there’s something very elemental about that story of mother and child and the separation of mother and child. The unity of being, and the disunity of being; the chasm that’s pulled apart and stitched back together. Thematically there’s a lot of meat to play with — not that I’m making a statement about Mary and Christ — but rifling through it and seeing what sort of emotional landscape it can lay for the piece.

BP: On another note, I read that you’re heading to Mumbai in 2022 on a Fullbright Grant?

LB: My work in India will be a combination of spiritual and historical study of the Jain religion, and using that as a catalyst to make a new body of work using a product from a company called AIR-INK. It’s a carbon sequestering system that takes carbon out of the atmosphere and turns it into ink for artists and printmaking. So it materially has ties to this idea of carbon-based life forms and the unity of things. If you want to push further, it’s a karmically positive material: ink from pollution. I’m going to see if there’s a way to use the waste product of it, so it’s a doubling down of karma [laughs]. I once took a course on the philosophy of yoga, and I was immediately interested in Jainism — how karma is a material object that’s actually passed between people and animals, and people and objects. Again, that flattening of the hierarchy.

Initially I wanted to apply to travel to China for my Fullbright, but you need to speak Mandarin — and the application was due in three days. So I scrambled and India came together seamlessly. I found AIR-INK online, and emailed the guy running it in Mumbai; he liked my idea. Then the university [The International School for Jain Studies at the Maharaja Sayajirao University of Baroda] that I applied to responded really fast. It’s the embodiment of my practice, the same belief that if you’re open to it, something will come, even if it’s not how you intended it.

Cullet and Pitch runs through January 16, 2022 at Goodluckhavefun Gallery in Austin.