Reforms and Echoes: Recent Exhibitions and Events in San Antonio 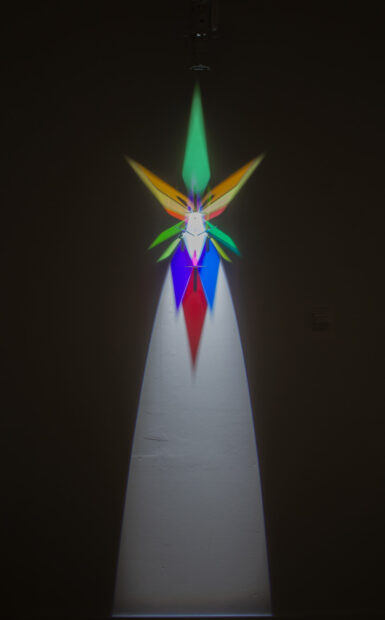 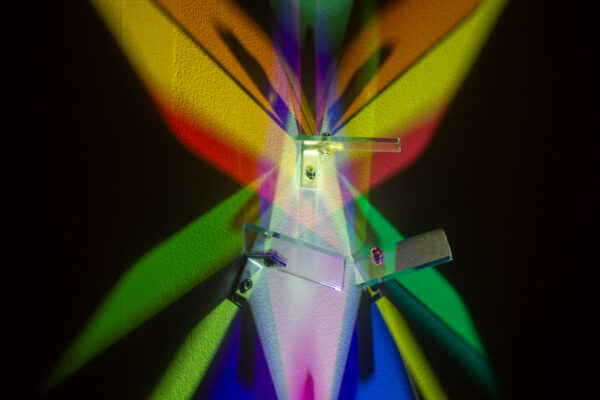 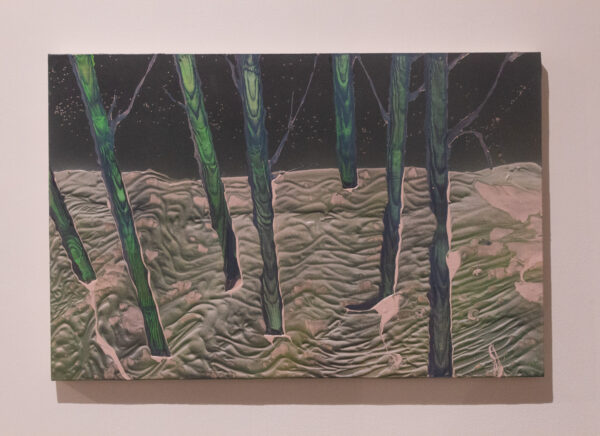 Jason Willome, “Besotted By Our Own Audacity,” on view at Blue Star Contemporary

This annual art sale and fundraiser has gone the way of the pandemic extension. Red Dot is usually a one-night event, where attendees buy tickets to enjoy a party and purchase the works on view.

“Last year because of COVID we extended the show two weeks. This year we did it for the length of an exhibition. We want the same amount of people that would come to Red Dot usually to be able to see the show over time,” says the space’s Curator and Exhibitions Manager Jacqueline Saragoza Mcgilvray.

Mcgilvray calls the show a “small survey of San Antonio artists,” but it feels much grander than that. Painting, sculpture, video, and other mediums get their limelight at Blue Star Contemporary, the anchor space to the Blue Star Arts Complex in San Antonio’s Southtown neighborhood. Cathy Cunningham-Little’s Flight continues the artist’s experimentation with dichroic glass to create a wall work that appears as a deconstructed stained glass piece.

Jason Willome showed what has to be my favorite painting I’ve seen in 2021. A phthalo green coats the canvas, and is interrupted by a coral sludge. Slim trees are created out of  by scrapes that reveal the full tonality of the green in Willome’s painting. It evokes a martian forest, covered in interstellar ash. The dotted, dim sky suggests space or snow. It looks just like an extra-terrestrial colony would feel: ambitious with a toxic glow.

Of the work’s desolate environment, Willome said, “a lot of the things I’ve been working on have things to do with traces of humanity, without any people in the picture.” Here, the artist has captured the human experience of life in 2021. 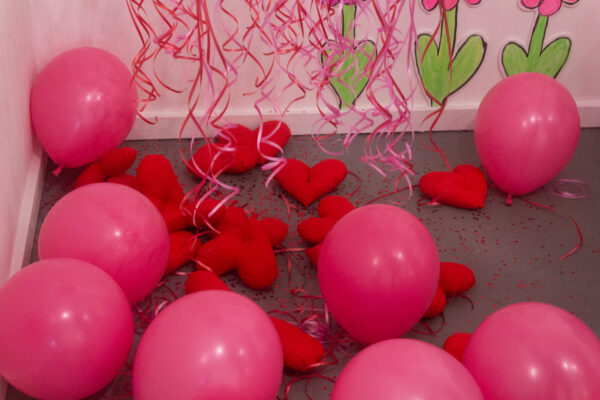 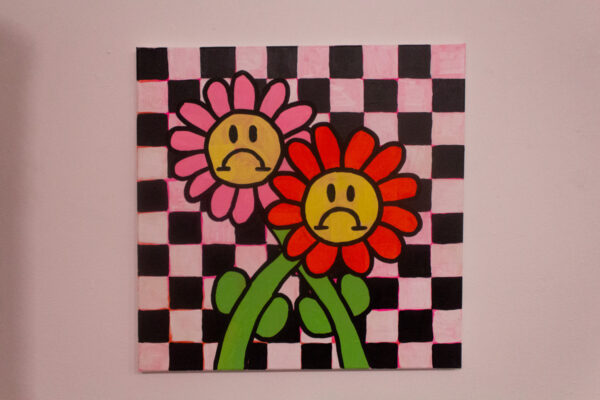 Ursula Zavala, “Reforma,” on view at Not For You Gallery 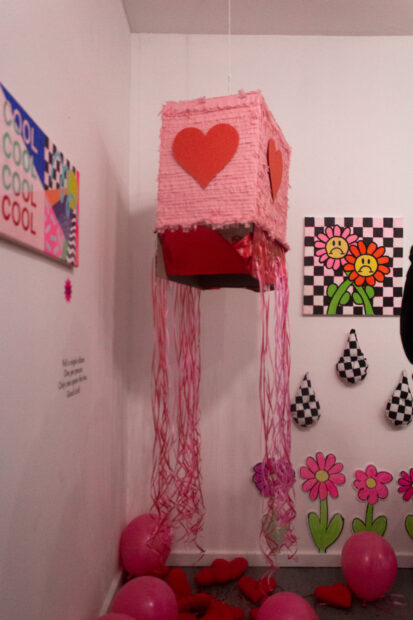 Ursula Zavala, “All I Have to Give,” Pull string pinata, 2021, on view at Not For You Gallery

Gallery co-owner Ursula Zavala presents a fanciful installation environment at Not For You Gallery, which is contained within a studio complex on the second floor of the Blue Star Arts Complex. Intended as an “epilogue” to the artist’s fall exhibition with Clamp Light Studios (also in San Antonio), the air of celebration was present for the December 3rd opening. San Antonio is already a festive place, so it’s saying something that Not For You Gallery’s opening reception had the most levity per square foot during the city’s bustling First Friday art walk. A large paper-mache pull string piñata beckoned attendees to take a chance on opening it up by yanking on ribbons that were attached to its sides. Plush hearts spilled out after it had been successfully opened, and were available for sale individually. A checkerboard pattern adorned both the tablecloth sitting under a large, sculptural, fabric cake, as well as the background of the childlike flower paintings on the walls. Zavala’s lighthearted show hits home on the theme of ambivalence; it’s hard to choose what to feel when times are so full of consequence. 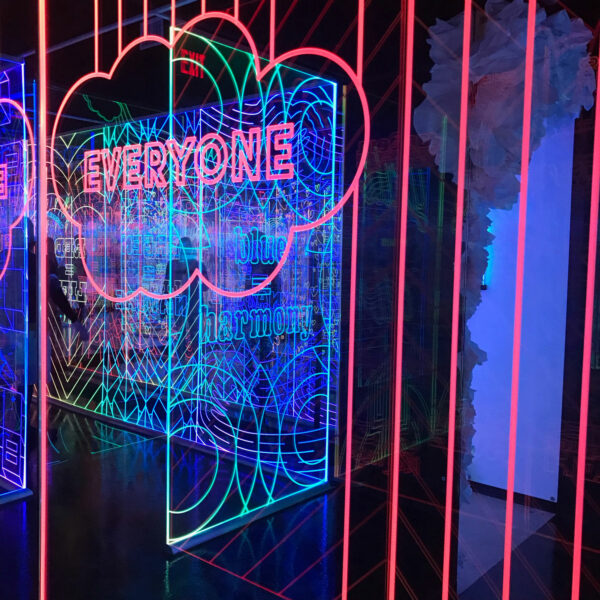 “Gaze” by the Human Rights Campaign, on view at Hopscotch 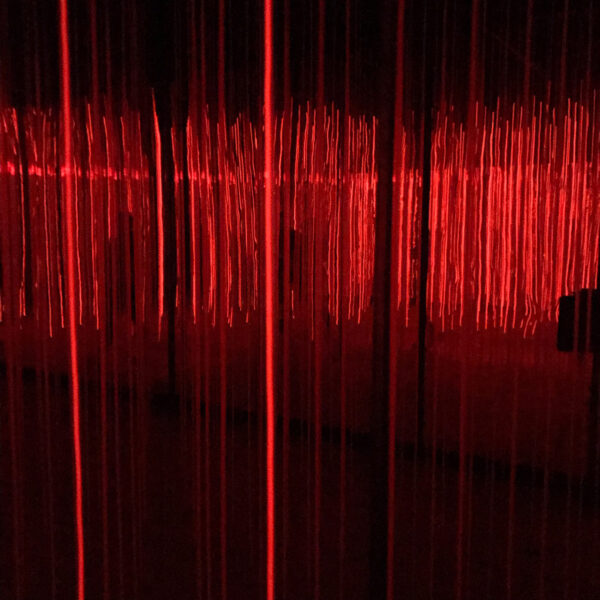 “Light Lines” by Campbell Landscape Architecture, on view at Hopscotch

Hopscotch is not quite an art gallery. Its pitch-black sub-level complex is broken out into cubicles, which each contain experiential installations that often incorporate new media elements. It opened its doors in October of 2020, and welcomes visitors from mid-morning to nearly midnight most days. Like an art gallery, there were light crowds and plenty of viewing room. Unlike a gallery, however, there are no overhead lights.

The experience of Hopscotch is mostly linear, but not entirely. After acquiring tickets at the front desk entrance, visitors travel down a flight of stairs, below street level, where the majority of the installations sit. There is a central area at the beginning of one’s tour, where an LED ball pit glows, ready for visitors to jump in. Color Therapy by Austin’s Polis is a room that has a ring of illuminated fabric stretched around the perimeter, and is also accessible from this central hub. After these two exhibits, the remainder of Hopscotch’s offerings follow a walking path, which is an unadorned hallway that leads the viewer between the space’s exhibits, before returning upstairs to conduct a final immersive moment: Light Lines, an installation of electroluminescent wires that hang from the ceiling continue the walking path. Eventually, the visitor is led to the gift shop, which is adjacent to the bar at the entry lobby.

I think there is a slight disconnect between Hopscotch’s experiential spaces and its passthrough spaces. This is not a request for immersive or experiential spaces to cover every square foot of the building in holographic foil, but a simple reminder that a club quickly becomes an empty room at a certain occupancy.

A few of the installations are software-based, which allows for the viewer’s actions to be interpreted and re-broadcast onto a screen, as in VJ Yourself by Playmodes, a team of artists and designers based in Barcelona. For the piece, the viewer stands on a well-lit section of floor, which illuminates their figure so it can be captured by a camera. The live video is projected on the wall in front of the viewer, and their movements become scrolling textures that play out on a time-delay. It certainly passes the time.

Hopscotch is a very attractive prospect to all working makers. It’s an interesting space in downtown San Antonio that hosts permanently installed media works, serves light bites, and can accommodate small events. The venue certainly has a vision for how it would like to engage the public with art — it has the essence (and the possibility) of being a mini museum. The work on view could use a little bit of the space’s enthusiasm, too. 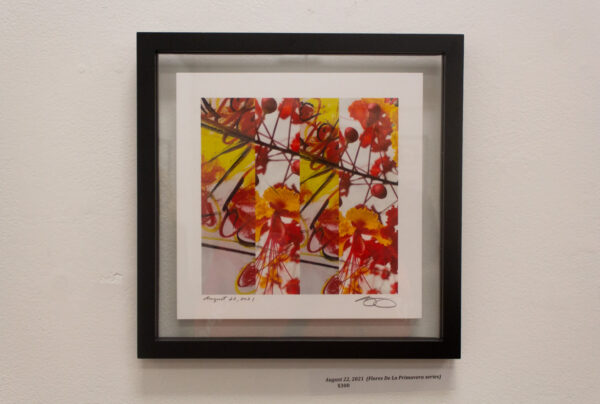 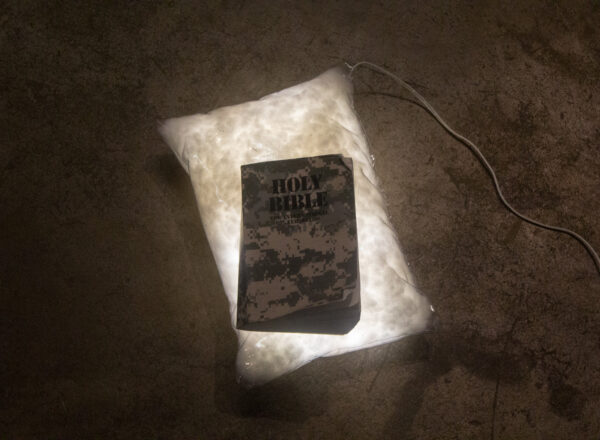 A work by Stephen Abernathy, on view at the Lone Star Studio Annex 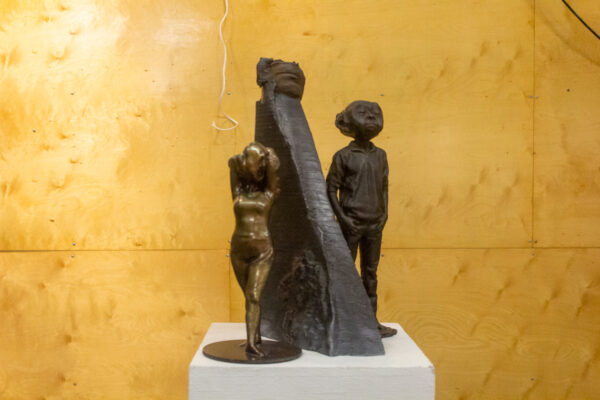 A work by Hanna Makkonen, on view at Lone Star Studio Annex

The galleries and studios at the Lone Star Art District are smart to hold their monthly art walk on the weekend following Blue Star Arts Complex’s First Friday event. Absent from the Lone Star viewing experience is the extreme congestion and parking woes of First Friday. The similarities extend to the vendors selling decorative wares, and the studio artists showing their spaces to the public.

During December’s Second Saturday, AJ Rodriguez displayed prints of photos and the drawing studies he produced from them, compared side-by-side in each piece. The collection of photos, first taken during the initial shutdown of the pandemic, became the source for pastel drawings, which have been collated to show the comparison between source material and creative output. The compositions reflect each other in a surprisingly beguiling way; it can be difficult to determine which party of the image is photographic at first glance.

The International Sculpture Center took up space in the Lone Star Studio Annex to show work by the ISC 2021 Student Sculpture Award winners, Hanna Makkonen and Stephen Abernathy. Makkonen’s works are bronze bodily forms, while Abernathy’s pieces prefer to comment more deliberately on current American conditions. A handheld phone (the analog kind) is attached to a stone boulder by its own cord, and a military-issue Bible is lit from below by the illuminated pillow it sits on. 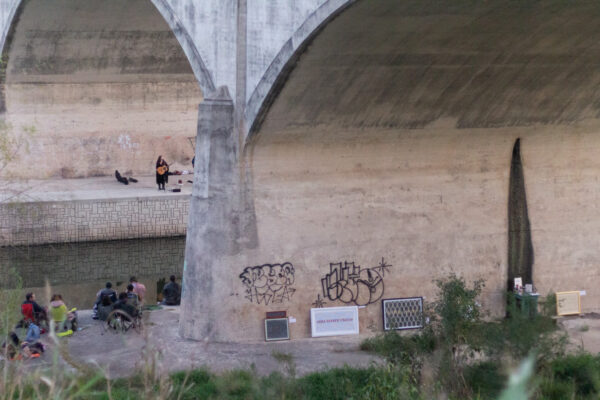 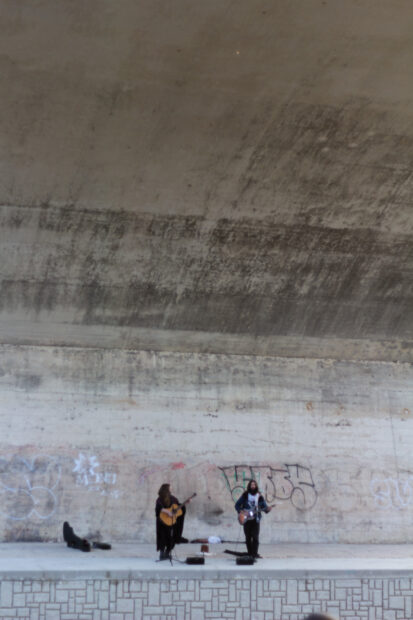 When Jolie Holland’s battery-powered amp gave out at her performance underneath San Antonio’s Echo Bridge on the south side of town, she improvised with a joke about two whales meeting at a bar. One whale says to the other, “Ooooooh,” a single syllable stretched out over a comically long meter. These words, meant to distract while the battery could be replaced, were watery and indistinguishably amorphous, like the river that stood between her and the audience. A showing of work by anonymous artist Wynn Doe sat along the wide-walled pier on the audience’s side, a light visual art accompaniment to the performance event.

Local artists Justin Parr and Jeff Wheeler have been conducting performance events, ranging from experimental to musical, at this unlikely amphitheater since March of 2021. A few shows into the year, the city of San Antonio shut the performances down, before promptly returning to offer the artist duo the appropriate permits to keep the shows going. The city seemed to recognize that Parr and Wheeler were conducting cultural programming that they would otherwise spend administrative time and dollars to put together. Parr and Wheeler are both multi-hyphenate powers in San Antonio; Wheeler is the Creative Director at Space C7 South Side Living + Maker Spaces, and Parr has run Fl!ght Gallery for 20 years. A Sunday performance matinee is a relatively modest feat compared to their breadth of exhibition experience.

Shows at Echo Bridge, conveniently at the edge of Tandem Coffee’s property, happen monthly and seat approximately 100 attendees. Be vigilant though, the limited capacity means that tickets sell out quickly.

FitzGibbons Packs Up the Show at Lone Star...