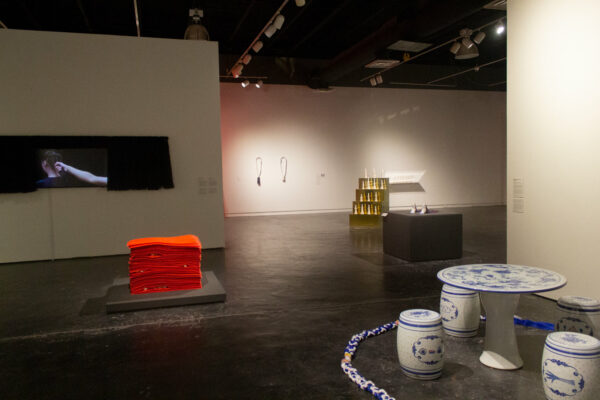 Jennifer Ling Datchuk’s exhibition Later, Longer, Fewer is an examination of Datchuk’s relationship to female labor, as well a critical look at the artist’s own identity as an Asian-American woman working within the craft medium of ceramics. It is a group of work, much of which is from this year, that follows the artist’s credo: to explain invisible things.

Throughout the main gallery of the Houston Center for Contemporary Craft, Datchuk has created installations that remind us of pressures — societal, familial, and otherwise. In Live to Die, small “China Girl” figurines are sandwiched under custom-made red floor mats that repeat the work’s title, “Live to Die.” Two works that are paired together, Break Like a Girl and Ache Like a Woman, are urns with painted references to the Powerpuff Girls and female reproductive capabilities, respectively. The two works sit on ledges over the viewer’s head, so that their long braids of varying colors can hang comfortably. Another work addressing similar themes is Two Week Wait, an installation of stair steps covered in mirrored glass tiles and adorned by 14 candlesticks, one for each day in the cycle between ovulation and menstruation. Alternatively, the candles may be read as representing the 14 days one was expected to quarantine during the earliest part of the COVID-19 pandemic. 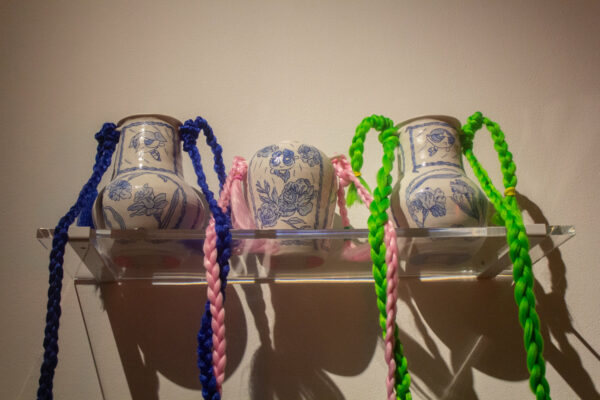 Jennifer Ling Datchuk, “Break Like a Girl,” on view at the Houston Center for Contemporary Craft

Each of Datchuk’s pieces is meant to be a respectful nod to social conditions that seem to be universal, but for which there are little accommodations. Women’s labor is not always compensated or validated (or when it is compensated, the pay is unequal), but it is expected in order to keep society on its forward path. Asian labor, by the same analysis, is similarly undervalued. The exports that we rely on (and cheaply, at that) are not usually attributed to the people who make them; they are simply expected to be available affordably and quickly. Datchuk’s work makes the statement that it’s not just labor and objects, but it’s Asian cultural symbols and references that the world has taken for granted. 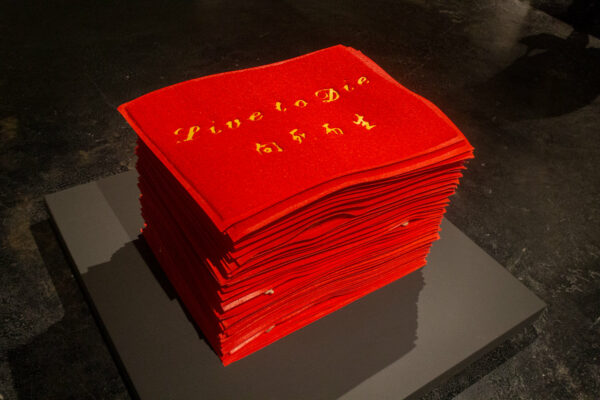 Jennifer Ling Datchuk, Live to Die, on view at the Houston Center for Contemporary Craft

Porcelain ceramics have the ability to be equal parts functional and decorative in execution: most homes have a toilet, and they also may have tchotchkes, which tend to be made from the sheeny material. In the generations that have passed, some of these items’ intended designs have either been lost or unwittingly misappropriated. At her studio in south San Antonio, Datchuk points at specific pieces in her own collection of porcelain curiosities. She shows me a figurine of a man and a woman entangled in sexual embrace. Pieces like this used to be given to newly married couples in Asia as sort of instructions for how they could consummate their marriages. “The history of the object is so far from what it was made for that it’s now for the tourist market,” said Datchuk.

Ceramics coming out of China are repeatedly expatriated from their cultural origins, in part because China has become a masterful exporter of so many things. There are simply so many items we now rely on from Eastern trade, that it can be difficult for the Western eye to know their origins. Datchuk often points at the middle space between things that are identifiably Eastern and things that are perceived to be Eastern. Datchuk’s experience acquiring porcelain collectibles has taught her about the nature of kitsch objects and their collectors. “They love it but they don’t know what any of it means,” she remarked. Kitsch is the entry point to ceramic objects for many people, but loving kitsch is not the same as cultural competence. Datchuk’s work plays with this by deliberately placing Eastern and Western icons and symbols next to each other. 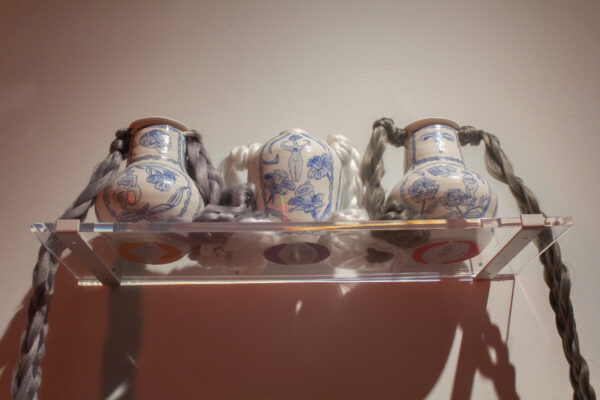 Jennifer Ling Datchuk, “Ache Like a Woman,” on view at the Houston Center for Contemporary Craft

Ceramics have a loaded history of cultural misappropriation. Chinoiserie, or the European interpretation of Chinese decorative and cultural motifs, is at once proof of China’s raw influence, and an example of how provenance can fly under the radar once something becomes popular. After sifting through Datchuk’s work and research, it becomes clear that Chinese aesthetics are everywhere, even in places that one might not initially assume. They have become, to some extent, invisible.

If one takes the time to reinvestigate the ancestry of Eastern motifs and crafts, that invisibility is eye-opening: some symbols have proliferated so well that they appear as commonly as any household item. Willow Ware is a term that refers to the widely recognized Chinese pattern on dishware. It usually contains a perimeter of a key block pattern (a motif of an interlocking design that is repeated), cranes (the bird), pagodas, and men fishing. “Willoware is the most appropriated blue and white pattern in the world,” Datchuk tells me. You’ve probably seen more examples of westernized Willow Ware than you have of pieces that came from China. The pattern is ubiquitous (and beautiful) enough to suggest a certain kind of refinement, without needing to explain why.

Datchuk articulated the natural chemistry of ceramics and porcelain a bit further for me: “Glass is silica based. The only difference between glaze and clay is a few ingredients and melting point. Porcelain is clay, but it’s made from feldspar with a high melting point that does come from the earth, but only in certain regions of the world.” China, of course, has a large deposit of feldspar. 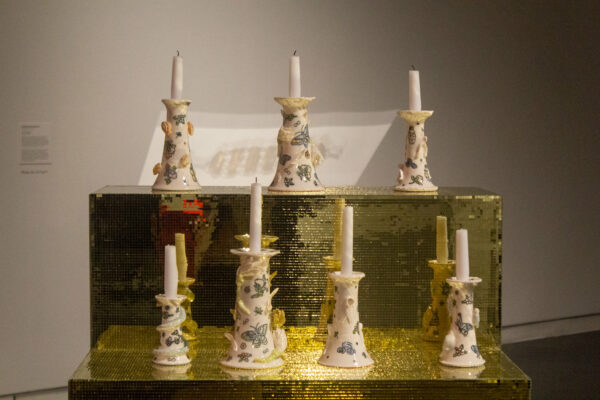 When discussing the more ancient aspects of porcelain, Datchuk suggests that I look up the Faience Hippopotamus, which also happens to be nicknamed William. Egyptian faience was a ceramic material made from powdered quartz and various available organic byproducts, like plant ash. Though it appears semi-clear, it is not glass. The base materials contain no clay, so it is not pottery, either. It is a more affordable (and more accessible) workaround. The Faience Hippopotamus, which is in the collection of the Met, is almost small enough to be a keychain (and it goes without saying that the Met does sell a keychain version of the famous hippo). Many of the collected items in Datchuk’s studio appear at this scale as well. The compactness of these objects lends them to being placed on a mantle or a shelf, where they can compliment everything they surround. Their glossy highlights draw the eye and create allure. The Faience Hippopotamus is dated somewhere around 1900 B.C., which means that small, shiny things have been relevant for a long time.

Datchuk’s exhibition is an exploration of contemporary porcelain and ceramic sculpture that acknowledges the messy pathway from the medium’s ancient origins to global trade markets, but doesn’t get stuck at the intersections of its complex relationships. Rather, Datchuk is determined to clarify her voice, which shines in the show like the glossy sheen of porcelain.