Five-Minute Tours: Jeanine Michna-Bales and Adam Reynolds at the Irving Archives and Museum 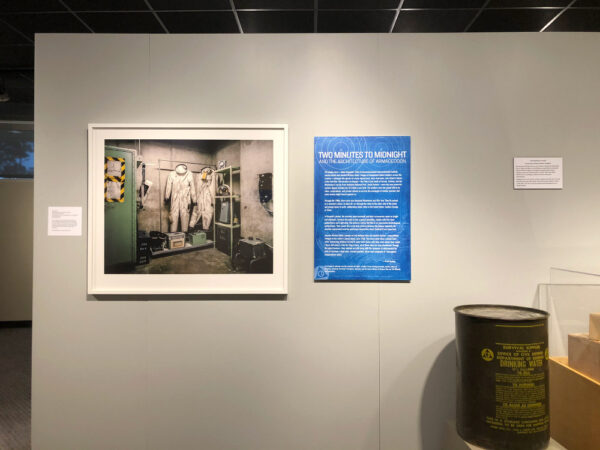 “In 2018, the Doomsday Clock was set to two minutes to midnight, the closest it has ever been to striking midnight since the height of the Cold War in 1953 when both the United States and the Soviet Union tested thermonuclear weapons for the first time within ten months of each other. Today, while the Cold War’s lessons and fears have largely faded from our collective memory, it is critical to view a decidedly uncertain present through the lens of the past. Two Minutes to Midnight and the Architecture of Armageddon is on view at the Irving Archives and Museum through January 7, 2022.

Through two photographic essays, photographers Jeanine Michna-Bales and Adam Reynolds offer a calculated look at the ‘Architecture of Armageddon,’ both the offensive and defensive implications of nuclear war. These quiet architectural spaces, devoid of people, allow viewers to come face to face with present nuclear realities while also offering a look into the collective psyche of the American people during the Cold War.

Reynolds’s project, No Lone Zone, documents the offensive side of the Cold War through nuclear missile silos in the United States. It provides a contemplated look at the nuts and bolts of Mutually Assured Destruction, the MAD logic behind nuclear deterrence. Michna-Bales’s project, Fallout, delivers typological documentation of the defensive side through various shelters and propaganda across the United States, both private and public. These fallout shelters, endorsed through Civil Defense programs, in reality offered little more than a government sponsored placebo to the American people, convincing them that something tangible was being done in the event of a nuclear holocaust.

This exhibition is aimed to spark curiosity, and encourage discourse among audiences of all backgrounds as the works seek out places that are often hidden in plain sight. Two Minutes to Midnight and the Architecture of Armageddon is organized by ExhibitsUSA, a program of Mid-America Arts Alliance.

About the Artists
Jeanine Michna-Bales is a fine artist working in the medium of photography. Her work explores the relationship between past events and their continued impact on contemporary society. She meticulously researches each topic—considering different viewpoints, causes and effects, and political climates—and often incorporates found or archival text into her projects. Her images have appeared in solo and group exhibitions around the United States.

Adam Reynolds is a documentary photographer whose work focuses on contemporary political conflict. He pursues visual research projects that balance photographic creativity with a journalist’s thematic fidelity. Reynolds has worked as a freelance photojournalist in the United States and the Middle East, where he lived in Israel/Palestine, Egypt, and Yemen. Reynolds’s photographs have been exhibited throughout the United States and abroad.”