Prospect.5 New Orleans Reconsiders the Past to Envision a New Future 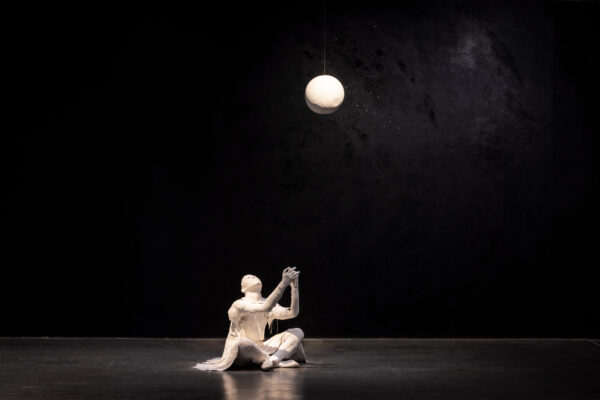 For the fifth edition of the Prospect New Orleans Triennial, curators Naima J. Keith and Diana Nawi selected the theme Yesterday we said tomorrow, choosing artists whose works consider the influence of the past in informing the present moment. With 51 artist projects at more than 20 venues across the city, Prospect.5 unfolds across art institutions and historic New Orleans neighborhoods. Capturing local and national perspectives of a city cyclically barraged with natural disasters, and a larger, politically charged contemporary moment in which we’re still grappling with racial equality, the triennial presents a vision of the present and the future that carefully considers how we record and honor varying perspectives and narratives. 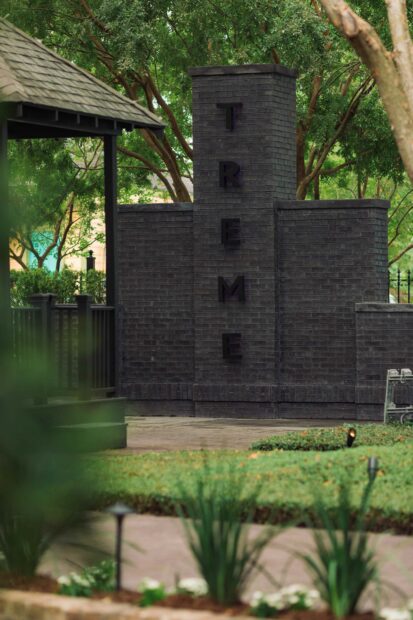 Throughout the city, monumental works highlight historic neighborhoods and local landscapes. At the New Orleans African American Museum, Paul Stephen Benjamin’s piece Sanctuary (2020-21) appears as both a shotgun house and chapel, the brick structure painted black with glowing letters spelling TREME. This is a nod to both the artist’s personal connection to the city where his father worked as a bricklayer, and to the residents of the historic Black neighborhood.

Several parks display public art commissioned especially for Prospect.5, such as and Nari Ward’s Battleground Beacon (2021) in the Tremé neighborhood, and Wangechi Mutu’s Crocodylus (2021) at Crescent Park. At Capdevielle Place Park in New Orleans’ Mid-City neighborhood, Anastasia Pelias’s work It was my pleasure (2021) draws from Greek temple architecture, featuring columns rendered in organic forms which mirror the trunks of the landscape’s surrounding crepe myrtle and oak trees. Pelias’s sculpture, both a temple and a throne to the legendary Oracle of Delphi, invites viewers to contemplate their own interiority and provides a space to connect with others. 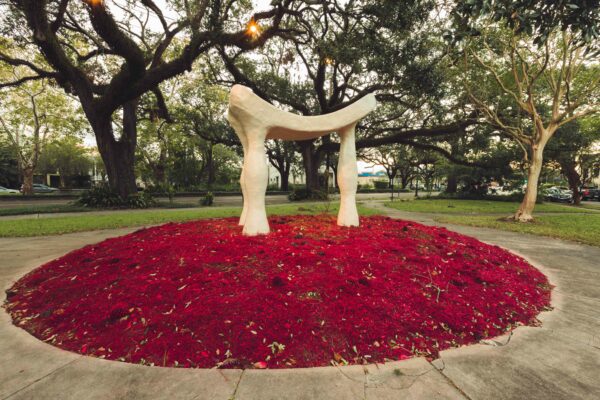 Down the street in the Warehouse Arts District, the Ogden Museum of Southern Art includes a formidable roster of artists, such as New Orleans-based Willie Birch and the Neighborhood Story Project. Both Birch and the Project portray a resilient city that, through its diverse history and determined residents, heals itself after each hurricane season and persists amidst a pandemic. Birch’s large charcoal and acrylic drawings document intersections of Black life and nature in the Big Easy. In addition to several drawings, one papier-mâché sculpture, Going Home (1992), depicts a mother and child seated on several stacked pieces of luggage; one suitcase is decorated with an image of the Amtrak, suggesting the woman and her daughter are waiting for a train back to New Orleans. 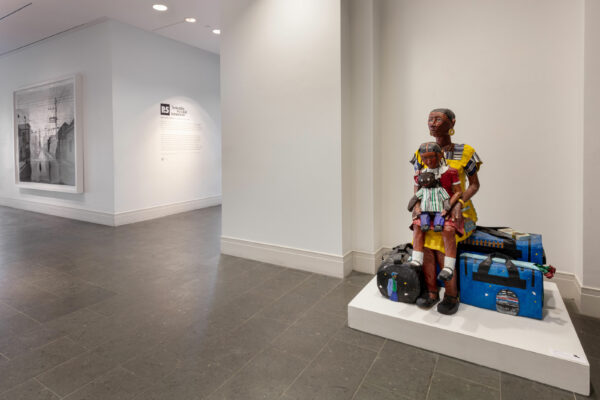 Several galleries at the Ogden include alters and photographs by the Neighborhood Story Project, a New Orleans-based art collective founded in 2004 with the mission of collecting and archiving local stories and histories. Considering alter traditions from throughout the African diaspora, including West Africa and the Caribbean, as well as Afro-Creole traditions born in Louisiana, the installations honor the stories of New Orleans women. The pieces invite viewers to learn more about the role of spirituality in their individual healing and also offer a space for meditation. 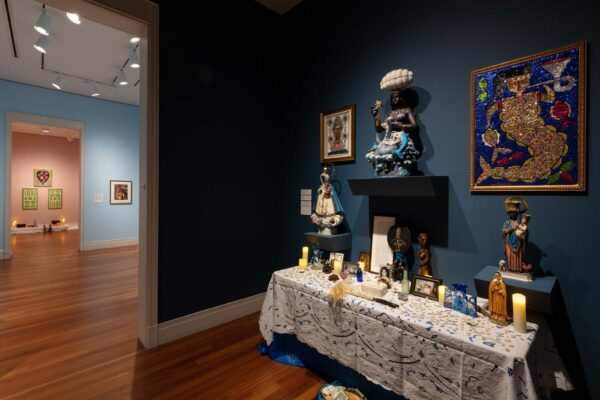 Similarly, the decommissioned church interior on the second floor of the Ogden offers an all-consuming sensorial experience. A highlight of the installation is a sound piece by Jennie C. Jones that profits from the acoustics of the space. The sonic collage amplifies a symphony of Black musical traditions, such as gospel and soul, and is paired with neon works by Glenn Ligon that denote the removal dates of six Confederate monuments in New Orleans between 2017 and 2020. These works propose a new way of recording recent social justice movements in the U.S., one that not only refuses to erase the voices of the oppressed, but also honors those who fought for the removal of these icons of white hegemony.

The specters of white supremacy rear their ugly heads in several of Celeste Dupuy-Spencer’s paintings, particularly Don’t You See That I Am Burning (2021), which was painted following the January 6th insurrection at the White House. The chaotic composition packs in bearded men outfitted in various symbols of white power (some of whom sport red MAGA ball caps) who are scaling the walls of the Capitol, while uniformed guards raise their guns and let destruction unfurl within the scene. The ugliness of Dupuy-Spencer’s subjects, much like those in Goya’s Black Paintings (among which include the famed Saturn Devouring His Son), are difficult to confront, but necessarily capture a contemporary iteration of racial prejudice. 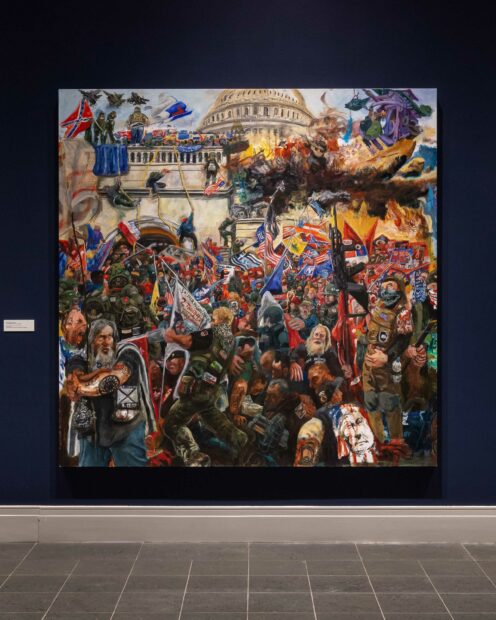 While the interior of the Ogden lends itself well to installations of dozens of works on paper and paintings, the Contemporary Art Center New Orleans, across the street, with its high ceilings and ample natural light, showcases several sculptural works and installations by nationally renowned artists, such as Mark Bradford, Kiki Smith, and Jamal Cyrus. Mexico and New York-based artist ektor garcia combines crochet techniques with metals, like aluminum and bronze, to challenge gender norms between art and craft. Additionally, Mesoamerican knot making and icons, such as butterflies, connect garcia’s works with his ancestral practices. Through combining masculine materials with a “woman’s” technique (or, simply, by creating delicate but strong sculptures out of metals), garcia metamorphoses the slang term mariposa, a derogatory expression for gay men, into a moniker for vigor and durability. 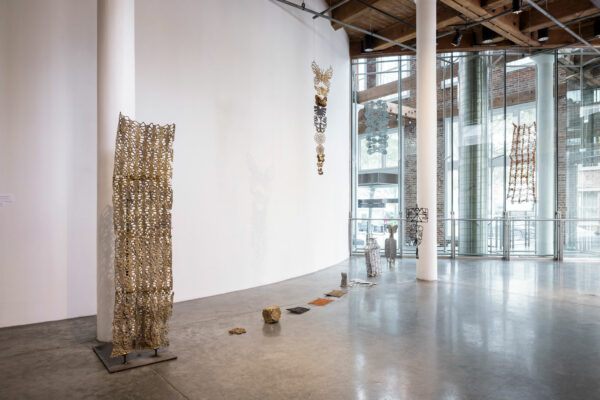 One particularly haunting sculpture installation in the triennial, also on view at the Contemporary Art Center New Orleans, is Karon Davis’s Mary (2016), a life-size sculpture of a seated young girl gazing upwards towards a beach ball moon. The work is cast in white plaster and set against a black wall that is perforated with small silver letters spelling out “BLACK MATTER.” While the girl’s glass eyes uncannily convey a human presence and her facial features suggest a Black subject, the white of the plaster and the incompleteness of the cast symbolize the underrepresentation of people of color in public spaces and how history is imprinted on the Black body. 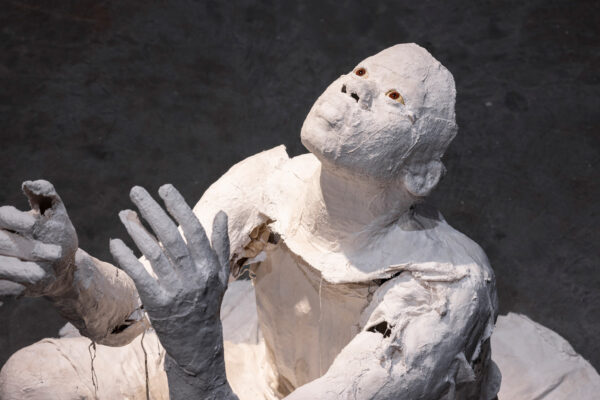 In its manifold exhibitions throughout the city, Prospect.5 displays works that consider the reverberations of past events in informing the present. Taken as a whole, the show proposes ways of transcending past traumas through art and spiritual mediation to envision an equitable future where all peoples thrive.

Prospect 5: Yesterday we said tomorrow is on view at multiple venues across New Orleans through January 23, 2022.