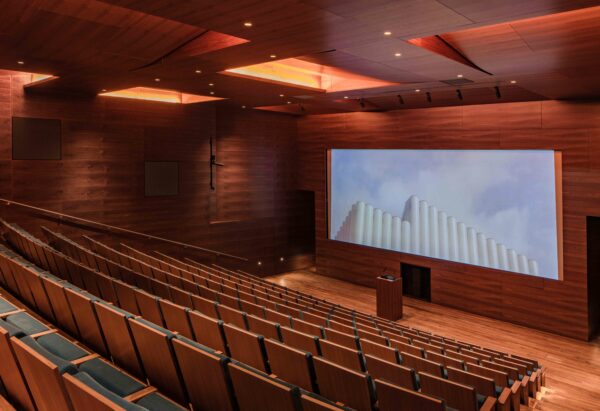 In a 2018 interview, the Museum of Fine Arts, Houston’s (MFAH) Curator of Film and Video, Marian Luntz, told Glasstire about the museum’s need for a second smaller theater space. Earlier this month, the MFAH filled this need by opening the new Lynn Wyatt Theater. Named for Ms. Wyatt, a longtime museum patron and founding Film Committee member, the space is designed with a focus on films. It will be the second theater at the museum with the capability of projecting 35mm films. In fact, the museum noted in a press release that its two spaces are currently the only venues in Houston equipped to show 35mm films. This claim comes on the heels of the closure of the River Oaks Theatre, (an independent theatre that at one time showed 35mm films) and the Rice Media Center.

Other key features of the Lynn Wyatt Theatre include state-of-the-art equipment for digital projections, micro-perforated wood wall panels for acoustic enhancement, and numbered seating. The 215-seat theater is located on the lower level of the Nancy and Rich Kinder Building, which opened a little over a year ago.

The MFAH has announced an exciting upcoming schedule of screenings, including some of Mrs. Wyatt’s favorite films, works from the Afro-Atlantic Histories series, new releases, and more. See below for a schedule of films happening throughout the coming week. Film descriptions via the MFAH. For tickets and more information, visit mfah.org/films.

One of the best-known Brazilian films around the world, Black Orpheus brings the Greek myth of Orpheus and Eurydice to the exuberance of Carnival in Rio de Janeiro.

Jimmy Stewart and Grace Kelly star in the Hitchcock classic about a photographer in a wheelchair who becomes convinced one of his neighbors has committed murder.

This anthology of stories about three women features an unexpected love triangle, a failed seduction trap, and an encounter that results from a misunderstanding.

This year’s selections for the popular compilation of British advertising features award winners from 2020, plus highlights of the “Made in Lockdown” category.

When lightning strikes at a Japanese movie theater, three young men in the audience are propelled into the action on screen and an epic time-traveling fantasy.