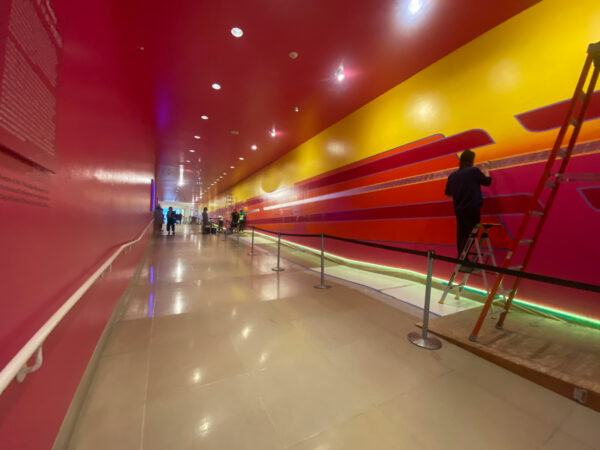 The installation of Guadalupe Rosales: Drifting on a Memory

Over the last two weeks, the Concourse at the Dallas Museum of Art (DMA) has gotten a makeover. Since 2015, the DMA has invited contemporary artists to turn the main hallway that runs through the building from a simple functional walkway into an immersive exhibition space. Past installations include N S Harsha: Sprouts, reach in to reach out, Nicolas Party: Pathway, Minerva Cuevas: Fine Lands, and Sandra Cinto: Landscape of a Lifetime. Before she departed the DMA to become curator of New York City’s New Museum, Vivian Crockett invited Guadalupe Rosales to put her unique spin on the space. Dr. Vivian Li, the DMA’s current Lupe Murchison Curator of Contemporary Art, told Glasstire in a statement that the DMA invites artists to create Concourse installations “based on the strength of their past work and artistic practice and their potential creative approach to reimagining such a large-scale space.” 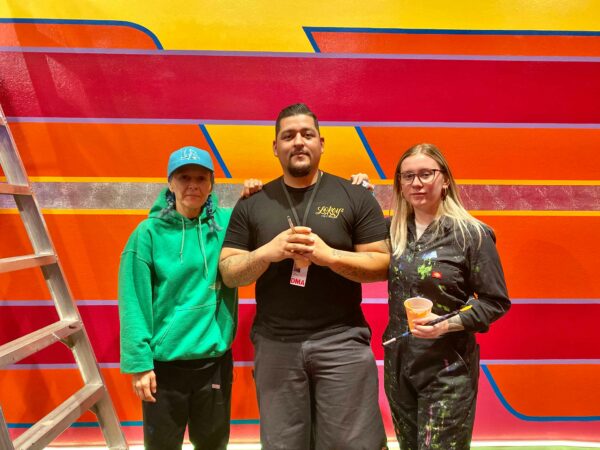 Ms. Rosales, a Los Angeles based multidisciplinary artist, is known for her archival projects Veteranas and Rucas and Map Pointz, which celebrate, document, and historicize Latinx culture in Southern California. For this installation at the DMA, titled Drifting on a Memory, Ms. Rosales collaborated with Dallas-based pinstriping artist Lokey Calderon to bring the look, feel, and sounds of lowrider culture to the museum. Ms. Rosales was familiar with Mr. Calderon’s work through Instagram, so she reached out to connect with him during the planning phase of the mural. The pair designed the mural together, and Mr. Calderon put Ms. Rosales in touch with other local experts to help bring their plans to fruition.

When asked about the collaboration with Ms. Rosales, Mr. Calderon told Glasstire, “It’s been an amazing experience working on this project with Lupe. We’re excited to bring the lowrider culture into the museum setting in hopes to inspire the youth, as well as expand the audience by bringing exposure to this art form we love so much.”

Mr. Calderon suggested bringing on Fort Worth-based muralist and lettering artist Sarah Ayala to assist in the project. She supported the duo by giving feedback about and helping tape off the artwork’s designs, providing logistical guidance, and helping paint the piece. She said of her experience working on the project: “Working with Lupe and Lokey has been amazing… I’ve felt respected by them the entire time we’ve been painting, all of my input [has been] taken into consideration. We’ve had meaningful conversations that I haven’t gotten to have with other Latin artists in person since the pandemic. It has been an exchange of sharing mural knowledge with Lupe and Lokey while also learning as much as I can, about their art and what it means to make large scale work in an institution. 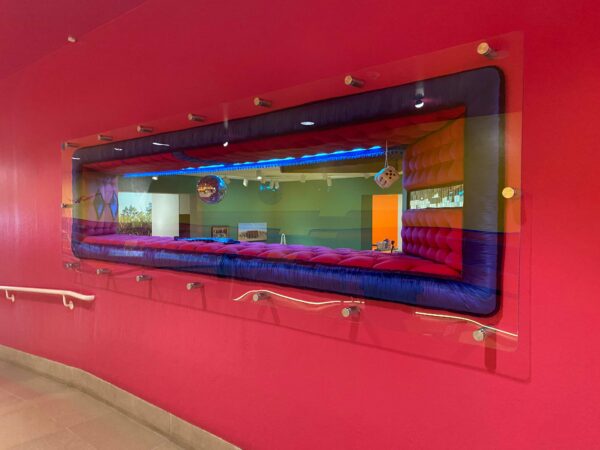 Detail from Guadalupe Rosales: Drifting on a Memory

Mr. Calderon also connected Ms. Rosales with his brother, Oscar, who upholsters cars. Oscar helped transform the concourse’s window that overlooks the museum’s Center for Creative Connections to resemble the interior of a lowrider. On the same wall, the installation includes two infinity light boxes — thin boxes that create the illusion of depth through the use of mirrors and neon. The surfaces of the boxes are engraved with images of comedy and tragedy masks and text that reads “Smile Now, Cry Later.” The boxes also include lowrider ephemera and photographs of Mr. Calderon’s family. 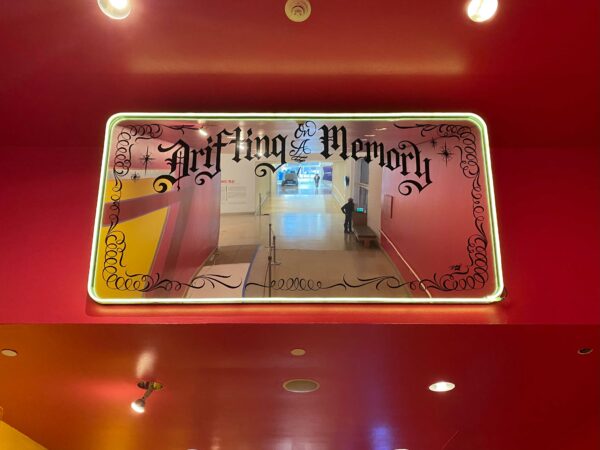 Detail from Guadalupe Rosales: Drifting on a Memory

The main mural installation is rife with vibrant colors, precise pinstriped lines, and a neon light that runs along its bottom. On one end of the hallway, a mirror hung from an angled ceiling is framed in neon and embellished with painted designs around its edges and the exhibition’s title across its top. Additionally, Ms. Rosales has incorporated sounds recorded while cruising — an essential part of lowrider culture that involves driving slowly to present the vehicles’ artistry, playing culturally specific music, and congregating with the community. In this case, the sounds come from a get together of the artist’s circle — her family and friends in East LA.

Guadalupe Rosales: Drifting on a Memory will be on view at the Dallas Museum of Art from Friday, December 10, 2021 through Sunday, July 10, 2022.