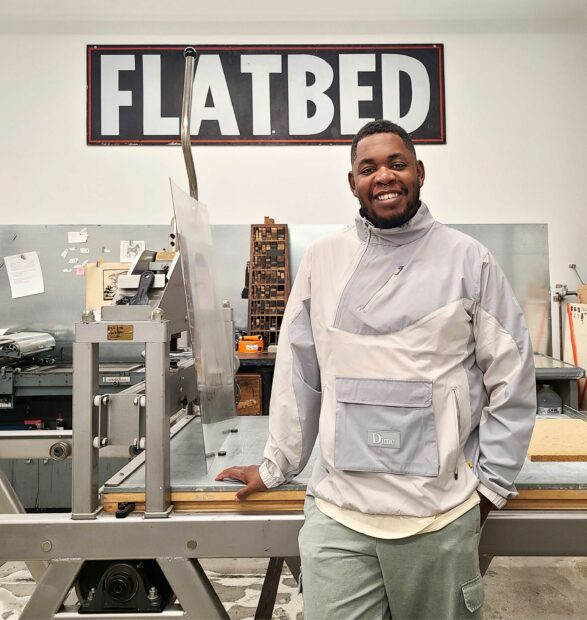 Austin’s Flatbed Center For Contemporary Printmaking, which boasts presses, exhibition space, and educational programming all dedicated to the printmaking arts, has announced that Adrian Armstrong will be its first-ever Jerry Manson Artist In Residence. Armstrong will be in residence at Flatbed for three months, receive a membership to Flatbed’s Community Press, and be presented with a stipend to cover the cost of printmaking materials.

Originally from Omaha, Nebraska, Armstrong moved to Austin after receiving a BFA from the University of Nebraska – Lincoln. Aside from printmaking, he also creates works in ballpoint pen and paint, and makes music under the name NJUNE. He combined all these mediums for his 2019 exhibition at Co-Lab Projects, Highs and Lo-Fi’s, which was reviewed for Glasstire by Leslie Moody Castro. Armstrong’s previous residencies include the Small Black Museum Artist Residency at the Carver Museum and Big Medium’s LINE Hotel Residency, both in Austin. Last winter he was included in Flatbed’s 2020 Hindsight: New Publications from Flatbed exhibit. A press release from Flatbed states:

Through portrait and figurative practices, Armstrong’s work explores identity and what it means to be a Black person living in modern America. His work touches on topics such as depression within the Black community, systematic oppression, and police brutality; but on the other side of the spectrum explores fashion, love, success, and growth. In 2020, Adrian collaborated with Flatbed Press to create two varied editions. He has often incorporated printmaking practices in his paintings.

The Jerry Manson Artist Residency will be awarded once annually to a local artist who emphasizes printmaking in their practice. It is named for Flatbed’s former Master Printer of Editioning and Master Printer Emeritus Jerry Manson, who died on May 28, 2019. Manson studied printmaking at the University of Texas and founded Third Coast Press before becoming a Master Printer at Flatbed in 1990. He “was a proponent of life-long learning,” according to the press release, which also states, “[h]is legacy has inspired the highest quality of print craftsmanship possible… at Flatbed.”

For more information, and to view a selection of Armstrong’s works that are currently for sale online, visit the Flatbed website here.