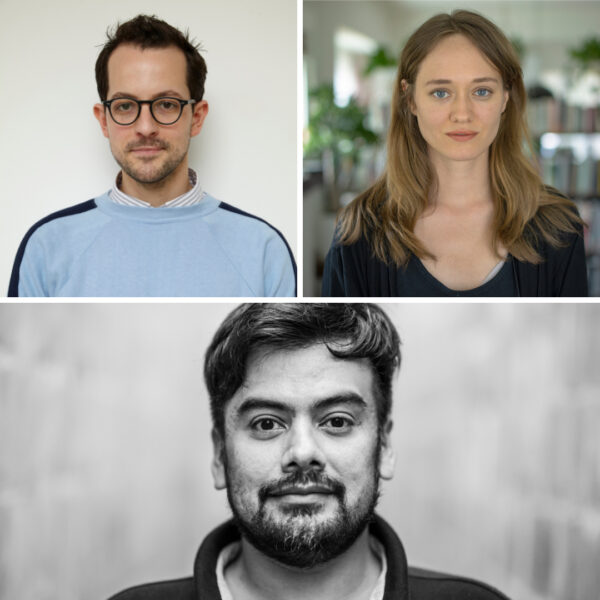 From Artpace: “In Folding, Floating, Falling, Shana Hoehn transforms wood, furniture, ceramics, and found objects into sculptural forms that recall uncanny elements of a girlhood fantasy and appropriations of the female form. One series draws influence from American automobile hood ornaments that are mostly hybrids of women and jet planes. Her interest in these ornaments stems from their use as symbols of industrial progress and the connection between these marginalized forms and American ideals. Hoehn told Artpace, ‘In these new wooden forms, bodies fold into themselves. Folded hair becomes serpent-like forms, weapons, or tools like rope. Furniture such as desks, tables, stair bannisters also become swamp-like surfaces where spines, braids, and plants emerge.’”

From Artpace: “For Naufus Ramírez-Figueroa, conflicting stories collide in his exhibition Cecília rebelde. Ramírez-Figueroa explores the catholic St. Cecilia and the story of the Totonicapán Uprising of 1820 of indigenous Maya peoples (K’iche’) against the Spanish Empire in Guatemala. More specifically, the artist focuses on the rumor that Atanasio Tzul crowned himself king with the crown of St. Joseph, borrowed from the church, and used the crown of St. Cecília for his wife, Felipa Soc. Cecília rebelde includes paintings referencing source patterns from Saint’s clothing, bronze and symbolic resin sculptures of the catholic St. Cecília and the folk Cecília, and an audio piece written by collaborator Winston González and performed by Julieta Garcia Reyes. Through a catholic saint and indigenous folk tale, Ramírez-Figueroa continues his series of work examining atrocities and rebellions.”

From Artpace: “Dan Herschlein’s exhibition, Plain and Sane, contemplates the tension between light and dark as a means of examining ideologies. Utilizing wood, plaster, and paint, Herschlein has constructed a thin house-like structure with one side cast in darkness and the other covered in light. As you walk through the house, two figures stand inside a pantry, passing sacks to each other. Are the figures hoarding or are they preparing for some inevitability? Are they looking out for themselves exclusively or are they helping others? Indications of scarcity and individualism peek out to the viewer, but Herschlein leaves the scene largely ambiguous.” 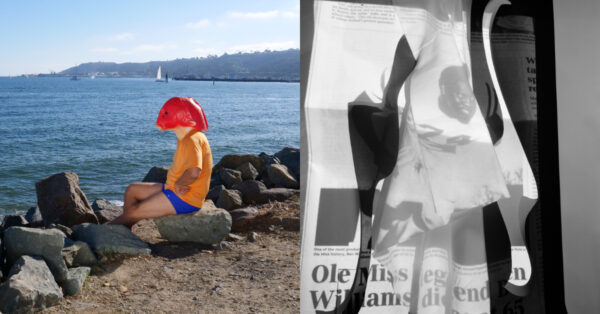 At left: a still from a video by Yue Nakayama. At right: a photograph by Aaron Turner

From HCP: “Houston-based artist and filmmaker Yue Nakayama combines techniques from documentary film, instructional videos, and performance to humorously respond to social problems and the human condition, from procreation and communication to climate crisis and mass migration. Yet, rarely does her work provide simple narratives or answers. Instead, Nakayama relishes in heterogeneous and often absurd stories that employ the perspectives of multiple narrators and speak to the complexity or instability of contemporary identities and belief systems.”

From HCP: “Alchemy is often associated with the ancient science and philosophy that, among other things, aimed to achieve the transmutation of base metals into gold and an elixir for immortality. Photography performs its own kind of alchemy, transforming light and metals into an image and, in doing so, fixing a moment in time forever. Aaron Turner’s series Black Alchemy relishes in the magic of the medium—the chemical and physical metamorphoses that occur when processing film and creating prints in the darkroom. It also explores the radical potential of the medium to move between representation and abstraction, and the past and the present. Through projected images and layers of cut paper, Turner’s pictures allow viewers to travel in time, combining archival images of black historical figures, such as Martin Luther King, Marvin Gaye, Frederick Douglas and others.” 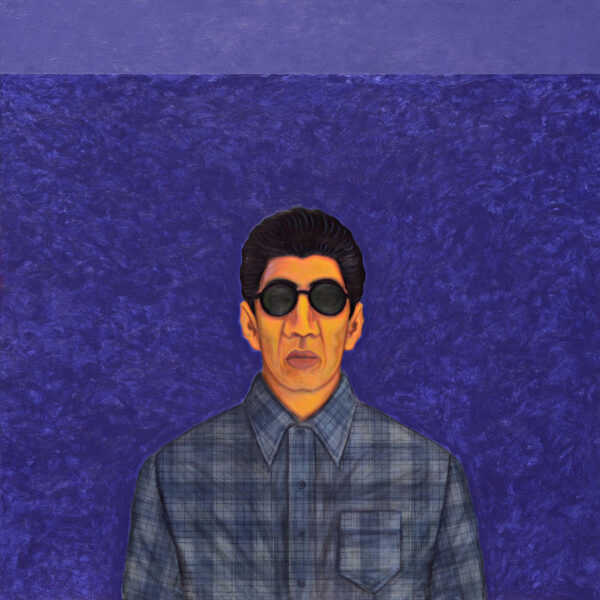 A painting by César A. Martínez

An excerpt of Martínez’s artist statement, from the Laredo Center for the Arts:

“During the early 1970s when I began activities as an artist, I was very much involved in the Chicano political movement. My closest friends were Chicano activists and we shared ideas about our politics and culture. Culturally, there was very little information about us. It was important to know who we were….no Chicano Studies at universities, or anything like that, existed at that time. We unwittingly started to invent that for ourselves out of need. We figured correctly that it would all, one day, be formalized.

It was all about defining ourselves for ourselves, self-determination in every sense, culturally, politically and whatever else. As an artist, a cultural exploration at all levels became my mission. To this day, I continue to do that. I work in many different modes of expression to do justice to the diverse themes I pursue. I’ve never confined myself by matters of style, with style being a superficial conceit. I like to think that I have contributed to both art and culture in general and specifically in defining Chicanos as a unique contemporary culture.” 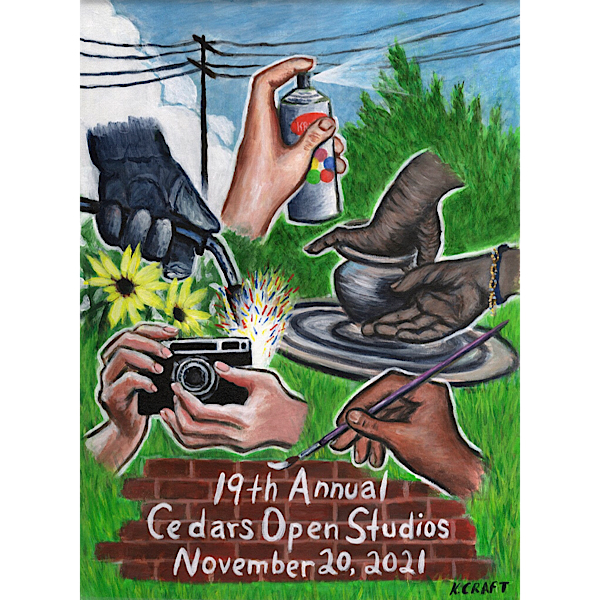 An open studio event featuring over 100 Cedars-based artists. This is also a chance to learn about the many artists collectives and galleries that are now based in the Cedars, including: Tin Ranch Artists Collective, [email protected], Studio Art & Soul, South Side on Lamar Artist Quarters on Botham Jean Blvd, Gano Street Studios, The Cedars Union Cohort 2, Ro2 Art, Janette Kennedy Gallery, and The MAC. 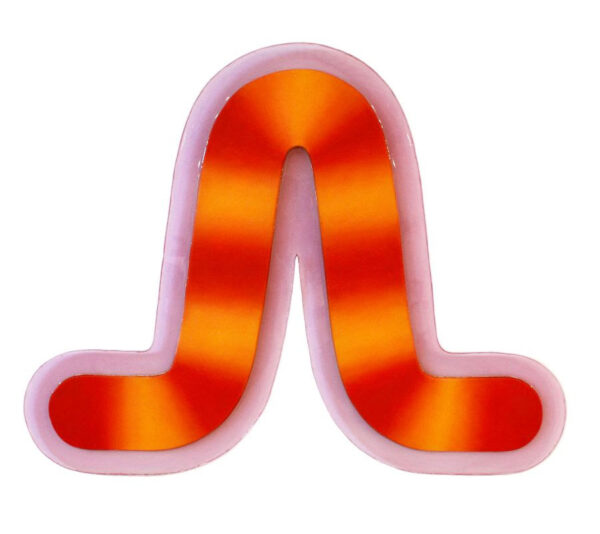 From Northern-Southern: “Laura Lit’s new animal-sized painted wall reliefs of wood, resin, and clay suggest sentience. Twelve will hang in Northern-Southern. Each is a deliberate dreaming, a spirit made solid, a tether to within. Lit summons the full range of her experience, as painter and from her work in film makeup, special effects, and architectural restoration. She composes the forms by meditation, or before sleep. Only when it is honed does she commit the design to paper, usually in a single drawing. Lit works alone, without assistance or fabrication. She jigsaws wood skeletons, sculpts molds, fine brushes oils, pours dyed resins, until something on the wall lives. Far In is on the forefront of what abstraction could become again, post Hilma af Klint: spiritual, deeply imagined, ur-real.”