This and That: Niki de Saint Phalle and The Princess Diaries

Saint Phalle created Shooting Painting American Embassy during Homage to David Tudor, a performance program she staged, with the artists Jasper Johns, Robert Rauschenberg, and Jean Tinguely, at the theater of the American Embassy in Paris on June 20, 1961. Over the course of the evening, each artist deployed strategies of indeterminacy—actions whose results are left open to chance—to make works onstage in front of an audience.

For her contribution, Saint Phalle hired a sharpshooter to fire a rifle at paint-filled balloons attached to a slab of wood covered in white plaster and paint with various objects encrusted in it; the bursting balloons created streams of brightly colored pigment that poured down over the work’s surface. A toy gun, a bucket seat, a hatchet, and an old shoe are among the items that were absorbed and reimagined as the stuff of painting.

The Menil Collection in Houston is currently presenting a solo exhibition of Saint Phalle’s work. Read our review of that show here. 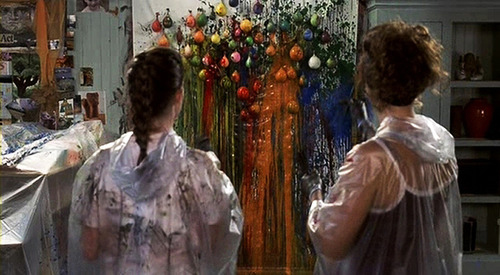 A scene from Disney’s The Princess Diaries

This and That: Puzzles

This and That: Animal Crackers and Celia Eberle

This and That: Jonathan Schipper & The Titanic

This and That: Put a Bird on It