Apocalypses, Heaven and Hell: Folk Art from the Collection of the Art Museum of Southeast Texas

In the years since its 2018 acquisition of more than 450 pieces of Mexican folk art from the collection of John Gaston Fairey, the Art Museum of Southeast Texas (AMSET) has organized annual exhibits featuring various gifted works. The earliest shows in 2017 and 2018 scratched the surface of possibilities around the collection; one exhibition focused on introducing the collection and featured a survey of works pulled from different media (John Gaston Fairey Collection of Mexican Folk Art: An Introduction), while another, Woven Wonders, was a textile show. And another early exhibition, Paraíso y Presa (Paradise and Prey), in 2018, began a thematic interpretation of the works, exploring creation imagery and the breadth of flora and fauna illustrated therein.

The latest showing of the John Gaston Fairey Collection of Mexican Folk Art, From Here to the Afterlife, draws on Christian-tinged visions of death rituals, heaven, and hell. The show displays Mexican folk art alongside the museum’s collection of American folk and visionary artworks, drawing connections between Día de Muertos celebrations and Biblical prophesies. 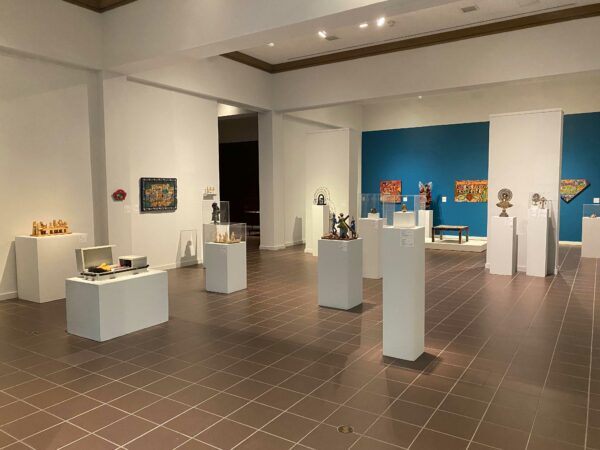 Installation view of the first gallery of From Here to the Afterlife: Folk Art from the Permanent Collection at the Art Museum of Southeast Texas, Beaumont. All photos by the author.

The first gallery of the show includes sculptures depicting scenes from Jesus’ crucifixion alongside corporeal vessels of death. One wall consists of a display of three artworks interpreting the scene of the Last Supper. Dallas-based artist Deacon Eddie Moore’s Last Supper (1993) borrows its composition from Leonardo DaVinci’s, but casts Black and Brown apostles to surround its Jesus. The angular features of the figures are a product of Moore’s aesthetic influence from stone carvings that decorate graves in cemeteries. Last Supper with Watermelon, an undated and unsigned work from the Fairey Collection, replaces bread and wine with watermelon and bananas. Indigenous apostles are seated on either side of a large central Jesus, their heads framed in feathers. 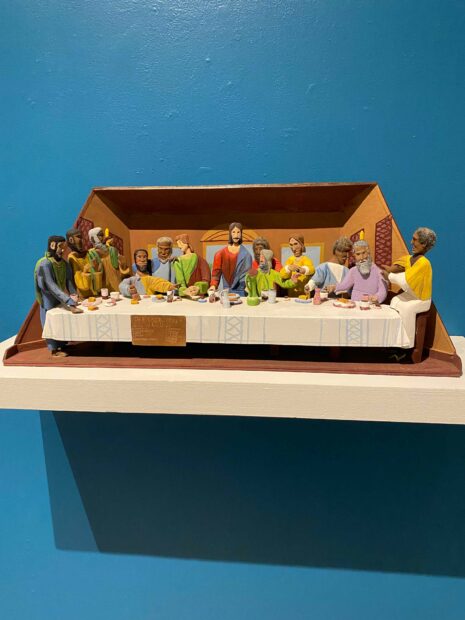 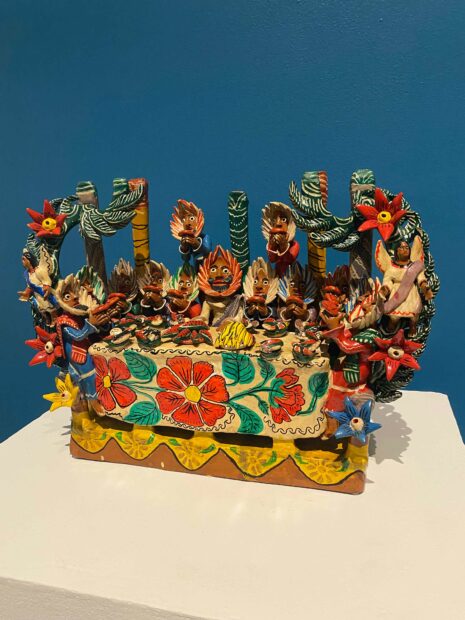 Across from the Last Supper sculptures is a selection of coffins and boats — vessels that transport bodies from world of the living to the realm of the dead. Sulton Roger’s sculpture Coffin (1990) is an open casket for a deceased wooden figure wearing a painted suit, whose face is framed by a soft pile of curls. Behind this work is a selection of four shadow box wooden caskets by artist Lester Davis. Images snipped from print materials, illustrations, and found objects — all of which Davis collected and collaged during his time in prison — poignantly bridge the quotidian and our inevitable end.

From the Fairey Collection, a woven work by an unknown Hispanic artist, Graveside Scene (no date), depicts four figures lowering a coffin into the ground, the scene presided over by a thatchy priest. Another work from the collection, Green Funeral Boat (Tajinera) (no date) imaginatively illustrates the passage from death to paradise. Clay skeletons patiently ride the brightly decorated boat, which is typically found in Mexican canals, on a cruise through the afterlife. 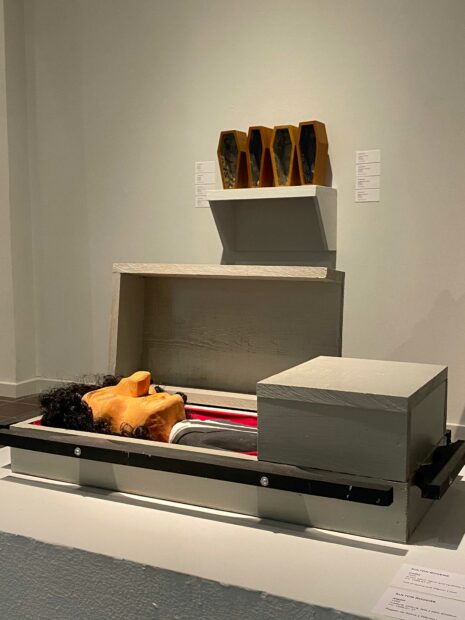 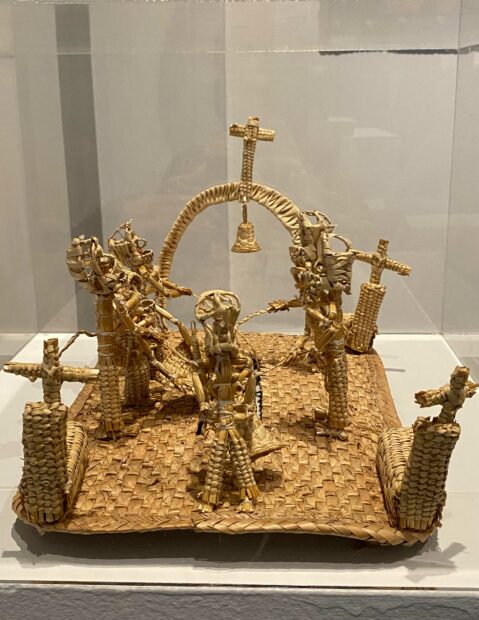 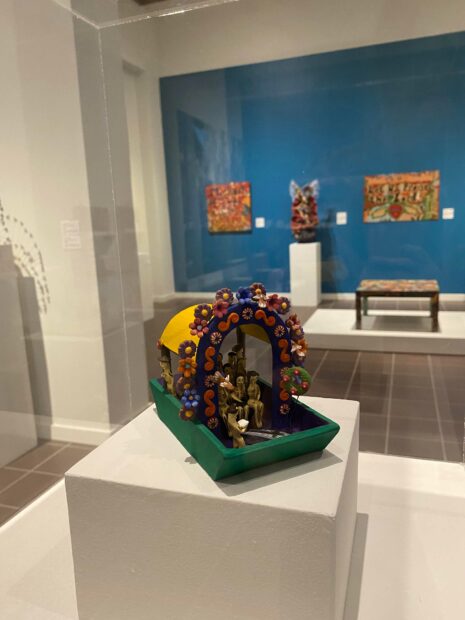 Imagery of devils, hellfire, and eternal damnation populate the second gallery. Sculptures of Saint Michael and San Miguel frame New Testament proclamations to heed messages heralded by angels. The late Beaumont artist Xmeah ShaEla’ReEl, born David Jones, used acrylic paint, glitter, and clock mechanisms to share a gospel message and predict the second coming of Christ in Archangel Gabriel (1995-1998). Another sculpture in the gallery warns sinners to repent: a red camper tagged with graffiti, revealing the damned destination of the frightened passengers inside, claims that “once the devil gets you hooked on sinn its hard to get loose….” 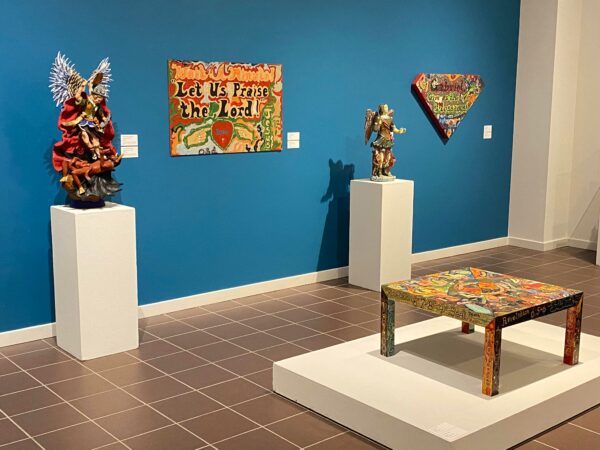 Installation view of second gallery of From Here to the Afterlife: Folk Art from the Permanent Collection at the Art Museum of Southeast Texas, Beaumont 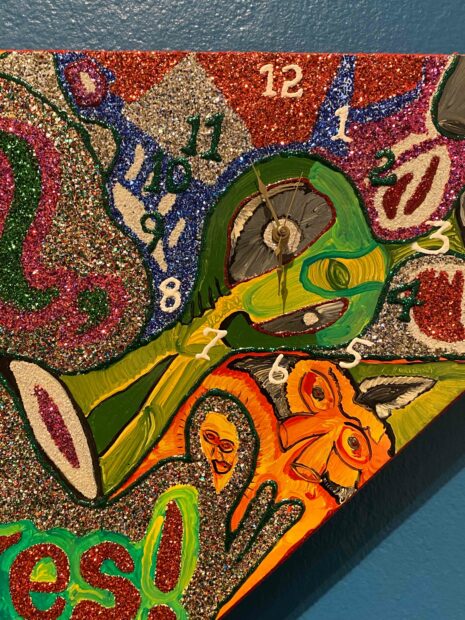 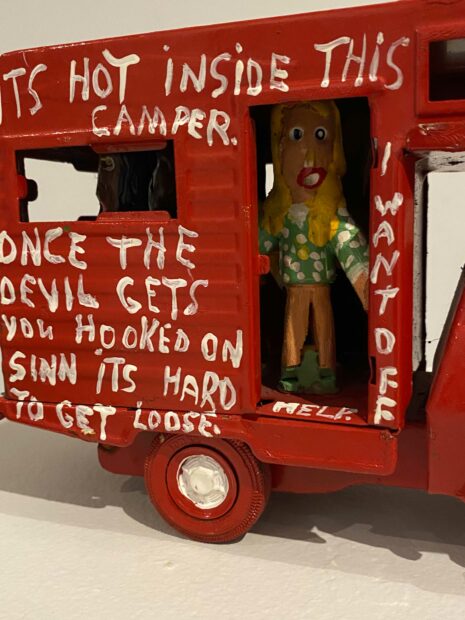 In this exhibition, AMSET collapses sub-categories of folk art to establish a dialogue between Mexican and American artists who create outside of the formal art world. Although many Mexican artists in the show may not have attended art schools, their practices have deep, ancestral origins. For example, the barro negro (black clay) sculpture Black Catrina Figure (no date) by Magdalena Pedro Martínez depicts the Day of the Dead Catrina icon in matte black clay, with the details on her skirt polished to a shine.

In Collecting a Master: Carlomagno Pedro Martínez, a separate exhibition of works from the Fairey Collection in an adjacent gallery, work by the artist’s brother reveals that sculpting is a family talent. The show perpetuates the craft tradition of the ceramic process, and expands the medium’s sculptural possibility through installations narrating Mexican and Oaxacan history.

Taken together, the works included in From Here to the Afterlife are examples of pieces by untrained artists that were inspired by a divine spark; they’re fueled by the artists’ urgency to warn viewers of the existential realizations of our immortality and of Christian-prophesied apocalypses. 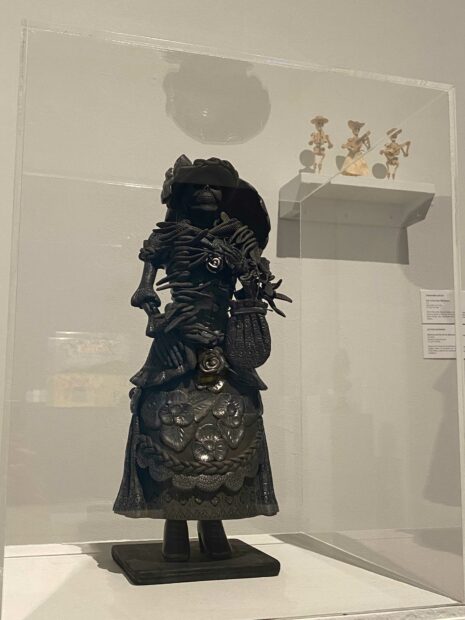 From Here to the Afterlife: Folk Art from the Permanent Collection is on view at the Art Museum of Southeast Texas in Beaumont through December 5, 2021.