Geoff Winningham, who serves as the Lynette S. Autrey Chair in the Humanities at Rice University, has assembled an exhibition titled Buffalo Bayou: River of Life at Houston’s Flatland Gallery. The exhibit will combine depictions of the titular bayou by contemporary Houston artists with a collection of archival images unearthed by Winningham.

Buffalo Bayou: River of Life, which originated as an idea for a fundraiser sale of Winningham’s own prints, has, in his words, “grown into something far more interesting.” It is built around a collection of 32 historic photographs that he discovered over the past year in the archives of Harvard University’s Frances Loeb Library, the University of Houston, and the Houston Metropolitan Research Center. These works have been reprinted for the show from new scans; around half of them are by anonymous photographers, and the others are credited to two historical figures.

One of the credited photographers, Arthur Comey, was a student of Frederick Law Olmstead, the famed landscape architect who designed New York’s Central Park. Comey came to Houston in 1912 to help develop a proposal for city parks. He traveled with a camera, and made dozens of photographs on his trip. Around fifteen of his pictures depict Buffalo Bayou,  a selection of which will be represented in the exhibition. 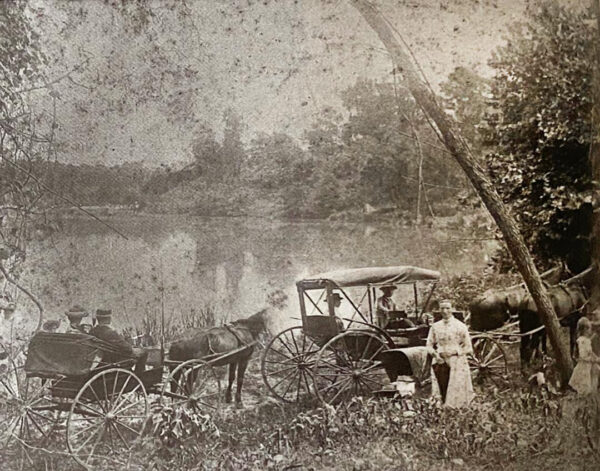 The show’s other credited photographer, Henry Stark, is believed to be the first person to make a photographic survey of Texas. His four images in the exhibition come from the winter of 1895-96, when he traveled the state to create a 255-photograph album titled Views in Texas.

Winningham first became interested in Buffalo Bayou when, in 1981, he was hired by Texas Monthly to illustrate an essay by Welsh author Jan Morris, titled Houston, City of Destiny. In that piece, she wrote:

Above our heads passes the Main Street Viaduct, its pillars scrawled with illiterate graffiti and leant against in the shadows by miscellaneous layabouts. To the west stands the off-white façade of the Houston Terminal Warehouse Cold Storage. The path behind us forlornly sprouts with grass, like the old roads behind the levees. The trains clank and shunt, as shunt they must in all such southern cameos. And half-hidden down there by its gloomy foliage, tentacled trees and impenetrable brambles, there in the womb of the city slowly swirls the old brown bayou. A ponderous kind of dragonfly frequents this ancient hollow; spin-drift floats about; and when the water momentarily eddies, with a gas bubble perhaps or a Houston Toad, really it might be the surfacing of one of those Texas alligators which, in prints of the first steamboat’s arrival at this shore, the crew are shown shooting right and left as they churn their passage into history.

Feeling there was more to uncover, Winningham spent the next five years making a systematic photographic study of the Bayou. This resulted in the publication of a book of his images, Along Forgotten River, by the Texas State Historical Association in 2003. Fifty pictures from Winningham’s years of photographing the Bayou, including some silver gelatin darkroom prints, will be included in River of Life.

Also featured in the exhibit are works by Houston-based artists Jim Olive, George O. Jackson, and Janice Freeman. Olive is the creator of Stockyard Photos, a stock and assignment photo company, and Jackson is a photographer with work in the Benson Latin American Collection at the University of Texas, Austin. Freeman is a painter and sculptor who has exhibited in the United States, Mexico, and Spain. 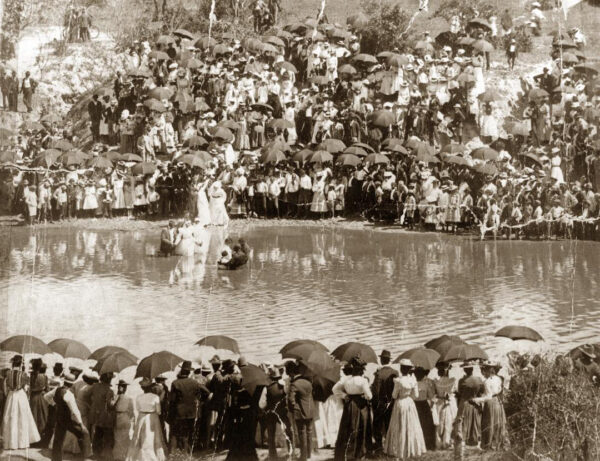 “Baptism in Buffalo Bayou,” ca. 1900-1914. Baptism on the South Bank of Buffalo Bayou, opposite Glenwood Cemetery. Anonymous photographer. Archival pigment print from a digital scan of the original print, Courtesy of Special Collections of the University of Houston Library.

Lastly, River of Life will feature photographs and monoprints depicting Buffalo Bayou that were made by grade school students in workshops led by Winningham and Freeman. The children will receive 50% of the profits from the sale of these specific works. The remainder, along with 100% of the profits from everything else sold in the exhibit, will be split between two local nonprofit organizations: Save Buffalo Bayou and Friends of Don Greene.

River of Life opens Saturday, November 13th with a reception from 5 to 7 PM. There will be live music by Max Winningham at 5:30 PM. The exhibition is open November 13-28, on Saturdays and Sundays from 12-6 PM.

Donald Lipski Will Have Houston Peering UNDER Buffalo...

I have a photo of the houston livestock show and rodeo dated may 10- 18 1930 {it is copyrighted}.
I would like to find out more about it as I have no information on it. It is a panoramic photo
8″ x 39″. I might be willing to loan it to the right organization for display.