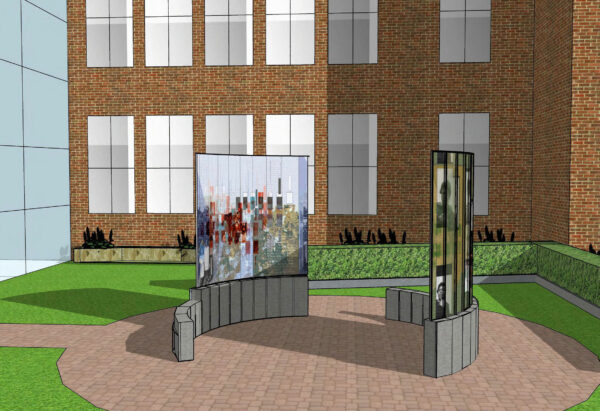 A rendering of Meditative Space in Reflection of the Life and Work of the late Barbara Jordan by Jamal Cyrus and Charisse Pearlina Weston. Image: City of Houston

The City of Houston Mayor’s Office of Cultural Affairs (MOCA) has announced the commissioning of a monument dedicated to Congresswoman Barbara Jordan. The monument will adorn the grounds of the Houston Public Library’s (HPL) African American Library at the Gregory School. Housed in the former building of the first Black public school in Houston, the African American Library is the city’s first library dedicated to the history and culture of the region’s African Americans residents. In a statement to the press, HPL Director Dr. Rhea Brown Lawson said of the project:

“The Houston Public Library is pleased through our partnership with MOCA to elevate civic art in the city in such a powerful way through this commission of the iconic Barbara Jordan. This project underscores The African American Library at the Gregory School’s founding charge to preserve, promote and celebrate the rich history and culture of African Americans in Houston and we are honored to host this dynamic work of art for the community to enjoy and experience.”

Houston-based artists Jamal Cyrus and Charisse Pearlina Weston will collaborate on the monument, titled Meditative Space in Reflection of the Life and Work of the late Barbara Jordan. The artists have worked together in the past: notably, Weston contributed the text for Cyrus’s 2018 exhibition with Jamire Williams at Lawndale Art Center, Boogaloo & The Midnite Hours (read our review of that show here). Cyrus and Weston were also both featured in the Contemporary Art Museum Houston’s 2020 exhibit Slowed and Throwed, which was influenced by the life and work of famed Houston hip-hop artist DJ Screw. That exhibit is currently on view at Artpace in San Antonio through November 21st.

Cyrus recently talked about his work with Glasstire contributor Peter Lucas. His exhibition The End of My Beginning, which closed at the Blaffer Art Museum on September 26th, will travel to the Institute of Contemporary Art, Los Angeles in 2022. Cyrus was the 2020 recipient of The High Museum of Art’s David C. Driskell Prize, awarded annually for contributions to the field of African American art.

Weston is a graduate of the Whitney Independent Study Program in New York and holds an MFA in Fine Art with Critical Theory Emphasis from The University of California-Irvine. She is a 2021 recipient of the Burke Prize from the Museum of Arts and Design in New York. 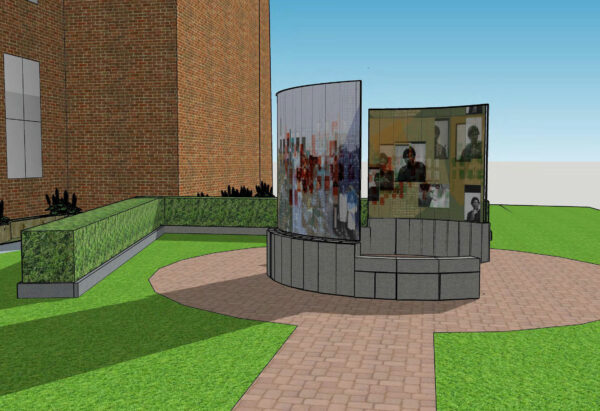 A rendering of Meditative Space in Reflection of the Life and Work of the late Barbara Jordan by Jamal Cyrus and Charisse Pearlina Weston. Image: City of Houston

The artists’ monument to Congresswoman Jordan is slated to debut in the summer of 2022. The result of a nationwide search by HPL, MOCA, and the Houston Arts Alliance, Meditative Space in Reflection of the Life and Work of the late Barbara Jordan, is, according to a press release from the Mayor’s Office:

“A dynamic, commemorative space wherein free-standing glass panels situated within a tranquil structure function as vehicles to represent, through an intricate photographic and text-based collage of materials, the life and work of Barbara C. Jordan. Transforming the lawn to the right of the Gregory School Library’s entrance, the Meditative Space invites visitors to enter a place of reflection to consider Jordan’s dedication to public service, racial justice, and the fulfillment of American ideals. The footprint of the commission is informed by the Adinkra symbol sepow, which represents justice and authority.”

“The artwork created by these artists brings present the impact [Jordan] had in defending the United States Constitution and representing the people of this City,” said Mayor Sylvester Turner in the press release. He continued:“the City of Houston is proud to honor Congresswoman Barbara Jordan in such a creative way.”

In 1972, Houston native Barbara Jordan became the first African American woman from the South to serve in the U.S. House of Representatives and, according to the U.S. National Archives, the first LGBTQ+ woman in Congress. She retired from politics in 1979 and accepted a position in the Lyndon B. Johnson School of Public Affairs at the University of Texas at Austin. Her many honors include the 1992 Spingarn Medal from the NAACP and the 1994 Presidential Medal of Freedom. She died in 1996. While there are statues of Jordan at the University of Texas at Austin and Austin-Bergstrom International Airport, Meditative Space in Reflection of the Life and Work of the late Barbara Jordan will be Houston’s first public artwork to honor the Congresswoman.