Rattlesnakes and border walls slither through the works of Julie Speed, a West Texas artist who makes her home and her art in Marfa. Speed paints deep, starry skies and plants her landscapes with scraggly, scrubby trees — both of which resonate deeply with her desert home. Yet when her latest exhibition, East of the Sun and West of the Moon, migrated 833 miles from the El Paso Museum of Art to Beaumont’s Dishman Art Museum, Gulf Coast viewers too found familiar fauna and imagery in Speed’s paintings and collages.

Speed’s exhibition at the Dishman collects twenty-eight works from the past decade. Her heavy use of bird, maritime, and hurricane iconography are well known sights to Southeast Texans, who are familiar with devastating hurricanes and are surrounded by bird sanctuaries and port towns. Even Speed’s way of working, documented in an accompanying short film, reveals a process many locals in the region have practiced post-Harvey: collecting, culling, and clipping water-damaged prints.

As hinted at by the show’s title, Speed’s collage material includes art from the East (Japanese woodblock prints) and art from the West (historical woodcut prints). Taken together, Speed uses mysterious symbols to make representational works that create open narratives around figures she poses as religious icons, including a hagiography of wave-swept saints, weather goddesses, and sailors. 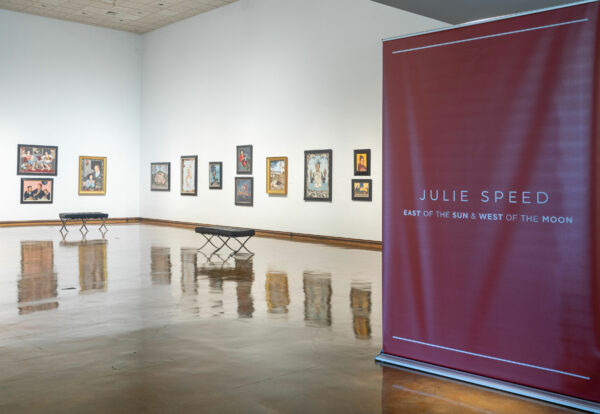 Installation view of Julie Speed: East of the Sun, West of the Moon at the Dishman Art Museum. Photo: Brandi Hamilton Photography

Multiple story lines start to take shape out of the works lining the white walls of the Dishman’s L-shaped first floor. One story is about a figure wearing cadmium red in Speed’s painting Rapids, who is simultaneously centered and sidelined in a river of chaos. The typecast sailor in another work, Sailorbaby, is a supporting character. Painted and collaged birds flit from canvas to canvas and vie for a title role: an angry cormorant squawks in Rapids and stares in Sailorbaby. Taking Speed’s cue, locals can easily imagine the brilliantly red-winged blackbird leaving Cattail Marsh — a wildlife refuge and bird watching spot a few miles from Dishman — and delicately landing in Speed’s menagerie. 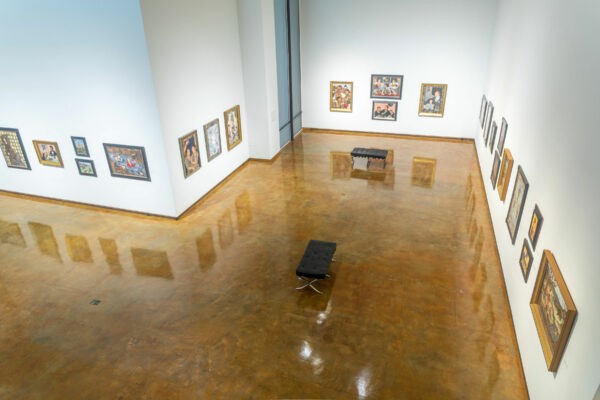 Installation view of Julie Speed: East of the Sun, West of the Moon at the Dishman Art Museum. Photo: Brandi Hamilton Photography

The Gulf of Mexico flings hurricanes, tropical storms, and floods at the Gulf Coast, and Rapids offers a story about the onset of a kindred deluge. In the gouache and collage work, a red-clad figure stands half-submerged in a raging river with elbows bent, their right hand at their heart, and their left palm open and flung away. The figure’s hands reference both holy oratory symbols originating in Western religious art, and mudras, gestures typically shown in Eastern religious art.

Perhaps a patron saint of sudden flooding, the figure stands stoic among waves and overturned tree roots that overlap and entangle three other drowning figures. The upended tree and twisted pines in the collaged, vertical strips of Japanese woodblock prints point toward the figure in red, and also mark the wake of Gulf Coast hurricanes. The rapids become at once floodwaters brought on by sleeper storm Hurricane Harvey, and the River Styx and the Sanzu — both mythical rivers of death. 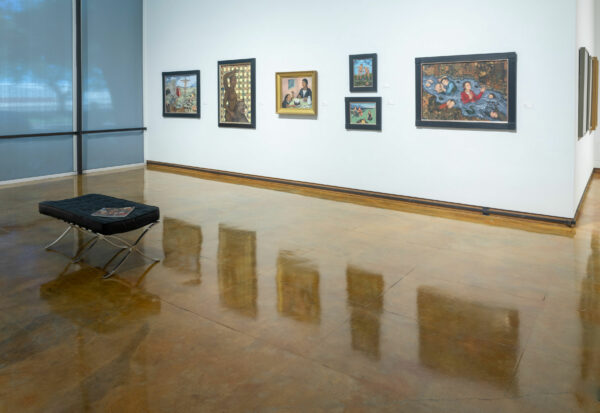 Installation view of Julie Speed: East of the Sun, West of the Moon featuring Rapids at the far right. Photo: Brandi Hamilton Photography

If Rapids offers a patron saint to waterlogged Texans, Deep Water reveals an angered weather goddess in muted gouache and collage. A giant figure with an unusually symmetrical face and body fills the canvas, looming over a small 19th century Brewer-esque European city. Wearing a half-halo of blue-grey clouds and standing partially submerged in inky, oily water, the figure lifts their open palms and bent elbows and wears collaged Gustave Doré prints of thunder and lightning as sleeves.

Slow and careful inspection yields tiny yet portentous details: the European town is cracking in its foundation, and ubiquitous Gulf Coast architecture lines the sea: miniscule, anachronistic offshore oil rigs and refineries. While refineries such as Exxon Mobil loom large across the street from the Dishman, Speed’s weather goddess renders these stacks and plumes insignificant and expungeable. 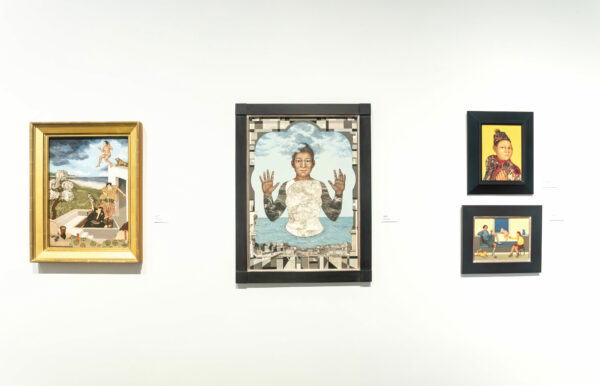 The sailor is another figure that is prominent both in Speed’s iconography and in the history of Texas’ Golden Triangle. In East Texas, the Neches River runs past port towns such as Port Arthur, Port Neches, and Beaumont, and while residents no longer see sailors in wide white collars and navy caps, they do spot oil tankers. The history of ports and of shipping is inextricably tied to the convergence between East and West.

Sailorbaby is an oil portrait of a sailor that reads like an old daguerreotype: a stiff figure gingerly holds a naked baby and is flanked by a glossy cormorant to his left and an incoming storm cloud above his head. The portrait is a lost origin story for an unknown baby girl who squalls at the sky. Pink and naked, the baby’s body suggests that she was born of the sea, like an Old Testament prophet. 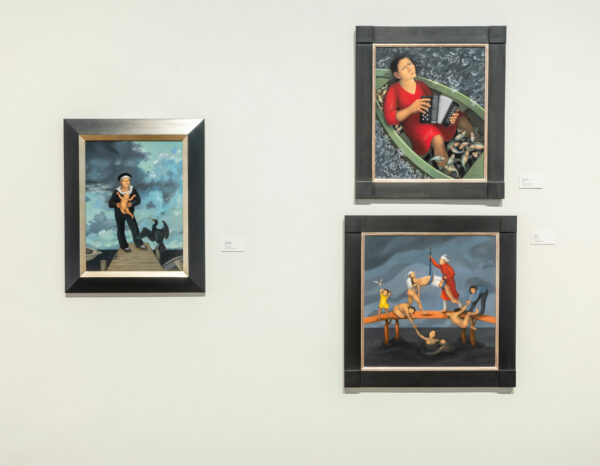 Speed uses open narrative and iconography to create images that are almost real, or in her words, parareal. Her scenes and stories exist alongside reality, shrinking and magnifying, mythologizing and transforming. The cormorant and the sailor are two of Speed’s icons, and in her narrative world, the cormorant plays multiple roles as a symbol for a fisherman’s good luck, an omen of doom, and a simple sea raven. By including hands in her iconography, Speed spotlights the human role in the natural world, and the effect the two have on one another.

Runaway rivers, inexorable weather deities, and inscrutable sailors create a sense of unease — a little eco-anxiety. Instead of surreal visual puns or absurd humor, Speed dares the viewer to begin finding their own parareal story.

Julie Speed: East of the Sun and West of the Moon is on view at the Dishman Art Museum in Beaumont through November 14, 2021.

This and That: Julie Speed, Vija Celmins &...

The Math of The Painting: Getting to Know...

Appreciate you teasing out “the birds” in her work! I take for granted how the Gulf Coast is a prime vacation post for migrating birds and the diversity of the ecosystem and conservation efforts. Also def a timely message on climate change–this show is physically installed in a space across the street from a refinery and at a school training the next generations of engineers.

I so enjoyed this piece: a great overview of a great show. I appreciate the elucidation of Speed’s otherworldly visual stories, which do seem to connect uncannily to the calamitous beauty that is southeast Texas.

Thank you! I hoped my love of the show would come through in the review.

Beautiful review, Sarah! It was such a pleasure to have Julie’s work at the Dishman. I made new discoveries with every visit and with each person I brought in to see the exhibit. Kudos to Dennis Kiel for his curating skills and to Julie for creating such mesmerizing artwork.

Kim, thank you! I must have visited the show at least ten times and spied something new during each visit. I couldn’t have written this without Dennis’s support. Thank you, Dennis.