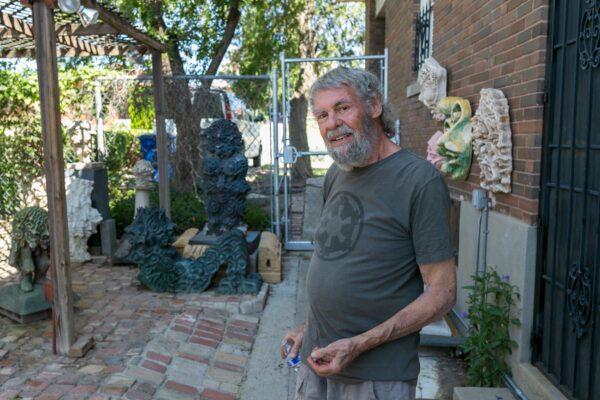 “I’m not a Buddhist. I’m not anything. I’m an artist. I’m a fool,” Ho Baron muses on his identity early one morning while wandering the brick paths of his self-made sculpture garden outside of his home in El Paso’s Manhattan Heights Historic District. Baron wears a T-shirt, cargo shorts, white tube socks, and a mischievous expression.

Baron, 79, is surrounded by totemic, surreal creatures of his own making. His “gods for future religions,” a tongue-in-cheek concept, are humanoid figures cast in bronze and stone. With deep grooves and maze-like textures, they appear simultaneously ancient and futuristic. 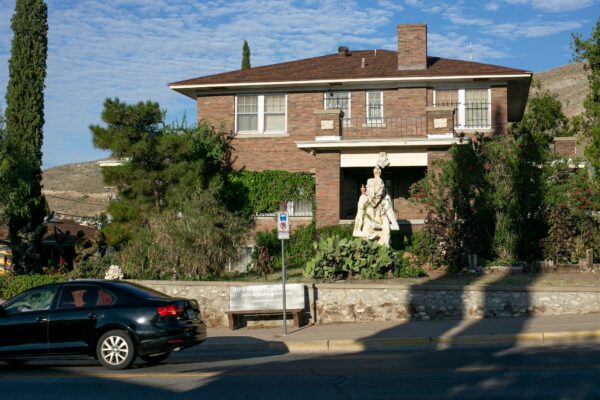 The artist decided to capitalize on his ability to reach an audience, given his house’s location right off of the busy Piedras Street, and set up a public sculpture garden with twelve primary pieces, which he jokingly refers to as his “show and tell.” His garden has evolved ever since he purchased his home in 1982.

“I hope people come up close and look at the details because the cars [driving by] are just seeing forms,” says Baron. “Primarily I make the work for myself and I’d like an audience. I made something different. Why do what’s been done? A lot of people just keep doing what’s been done. That’s what art is about, originality.” 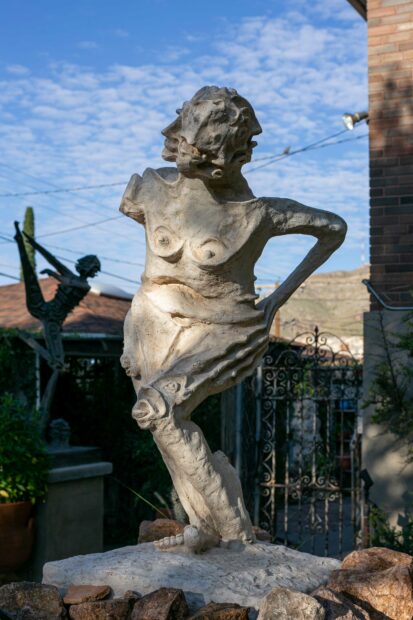 While Baron’s work is often referred to as folk or outsider art, he says he identifies most with the “visionary art” label. Naive rather than refined, Baron’s sculptures often feature faces within faces and have varied genitalia, representing an idea he refers to as the “theory of multiple selves,” or simply, “we are many people.” Taunting tongues jut out of mouths, holding marble-sized balls which Baron says are a spoof meant to symbolize balance.

“My gods are the personification of my energy; they are my vision, my illusion, my jewels, my psychic projections and the depictions of my unconscious,” Baron wrote in his 2012 self-published book Gods For Future Religions. 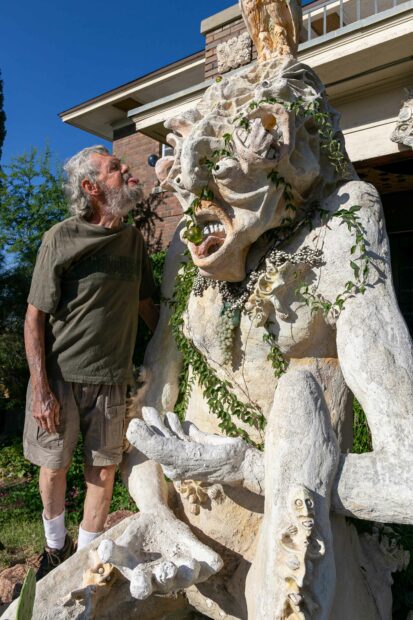 Baron’s concrete and stucco sculpture The Water God is a central figure in his sculpture garden. The piece sits over 8 feet tall, faces the street, and is wrapped in vines and surrounded by oleander, amaranth and prickly pear cacti. Due to its size and appearance, it has been somewhat of a controversial inclusion in the neighborhood’s landscape, earning Baron a reputation as a devil worshipper among some. In a YouTube video Baron made about the sculpture, he says he was inspired to make his very own symbolic deity after his travels in Asia, during which he was surrounded by Buddha figures. The piece is also a commentary on El Paso’s water scarcity. 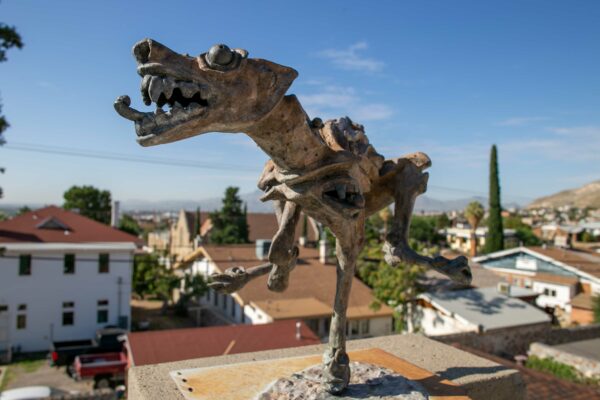 Watching over The Water God and the rest of the sculpture garden from its post on the roof is one of Baron’s most popular sculptures, Post-Nuclear Dog. The tiny apocalyptic canine hurtles forward mid-sprint, tongue out, with one paw on the ground. Its oversized bronze nose and bulging eyes endear the viewer.

The foursquare style home that hosts Baron’s sculpture garden boasts a storied past: it previously belonged to the vice president of a silver mining company who allegedly welcomed the president of Mexico at a party. Ten to twelve visitors stop by the sculpture garden per week, Baron estimates, many of whom are younger folks or artists themselves. 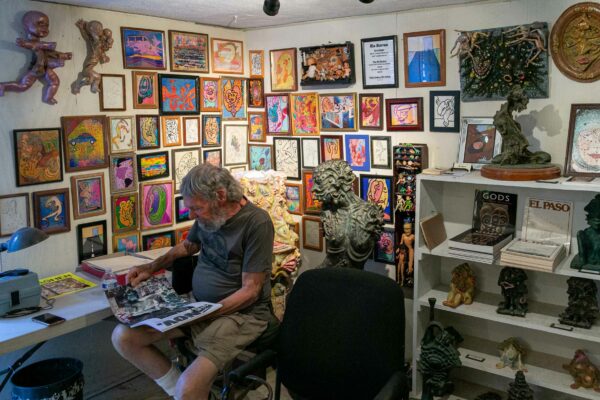 In addition to the outdoor sculptures, the ground level of Baron’s home, which long ago served as a servant’s quarters and more recently as a rental apartment, has taken its latest form as an indoor space dedicated to Baron’s art. The space is densely packed with sculptures, reliefs, drawings, and photographs, along with a handful of books and publications he’s produced. Even the bathroom holds boxes of his double exposures, which are for sale, ranging in price from $25 to $50. Baron says at this point he’d just like to get his art in people’s hands.

Three years ago Baron was diagnosed with Myeloma, a rare form of cancer that affects plasma cells. He has been living with the disease ever since, but keeps busy, spending time in his garden plots growing swiss chard, broccoli, and carrots, and walking his dogs a mile every day. In addition to hosting a rotating cast of sightseers to his space, Baron is working to place more of his sculptures into public and private collections. 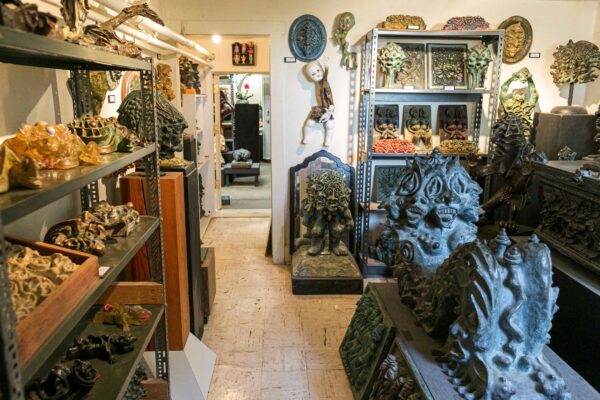 “I thought I was gonna die right away. So I wrote Silver City [an arts and cultural district in Silver City, New Mexico] and said, ‘take what you want.’ They came here with a flatbed and took 13 pieces of art,” says Baron.

Baron hasn’t experienced robust commercial success as an artist, although many of his sculptures have either been acquired by or donated to reputable institutions across the U.S., including the El Paso Museum of Art, the Albuquerque Museum, and the American Visionary Art Museum in Baltimore, Maryland. A full list of where to find his sculptures can be found on his website. 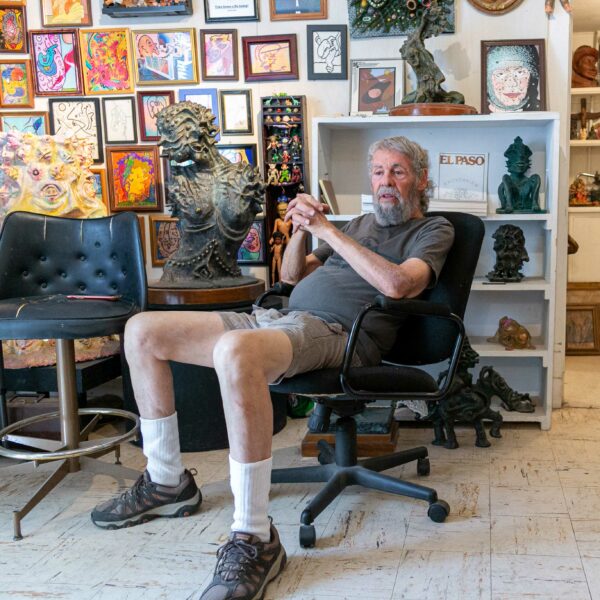 With no solid plans for the future homes of his artworks, Baron says he has thought about assembling a time capsule and burying everything underground, or sealing it all up in one hidden room. The University of Texas at El Paso’s (UTEP) Library has an archival collection of Baron’s work, including digital copies of photographs, articles featuring Baron, his letters to the editor, and more. Claudia Rivers, head of the special collections department at the UTEP Library, says she and a team are planning to visit his home in order to photograph his works in situ.

Baron will also be among the artists featured in Dreams, Visions, Other Worlds: Interviews with Texas Artists by Robert Craig Bunch, a forthcoming book from Texas A&M University Press. 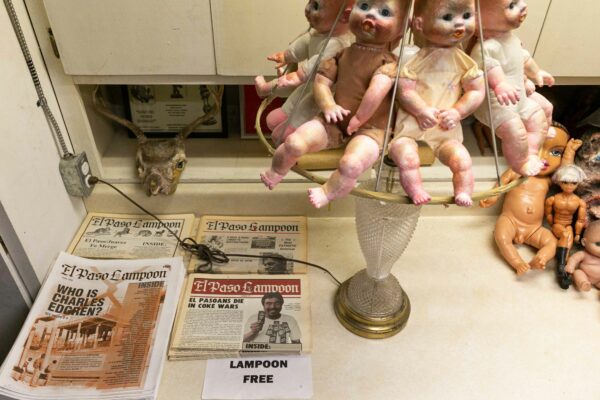 A prolific writer as well as visual artist, Baron is the creator of The El Paso Lampoon, a satirical newspaper with a handful of editions spanning the ‘90s and early 2000s. Pages are filled with fake headlines, collages of politicians’ heads pasted onto the bodies of animals, line drawings by Baron, and works by other contributors. A segment called “Speak Up” poses the quandary “Today’s Question: Why Do You Pick Your Nose While You’re Driving?” with four interviewees. A fake advertisement for his sculpture in the October 1996 paper refers to his works as “garden fetishes” and tries to appeal to buyers with lines like “Support the Ho Effort,” “Start Collecting Today,” “for brighter roses, taller trees, the sky more blue, a good stew and smarter kids,” and “Sculpture That Tickles.”

Another of his publications, El Paso: A Hoverview, features black and white photographs of El Paso’s urban desert landscape superimposed with line drawings. 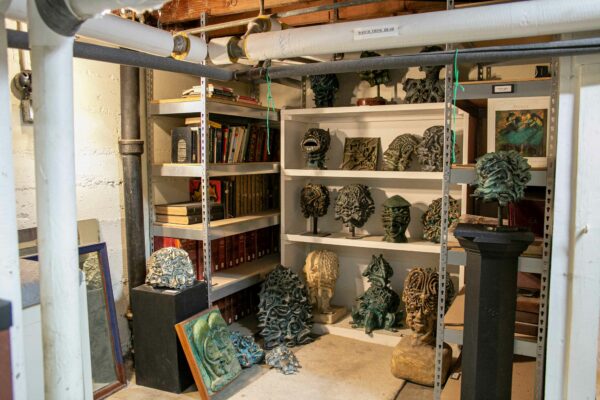 For years Baron partnered with the Vladimir Alvarado Foundry in Juarez, Mexico to create art using the lost wax casting process, but he’s changed artistic mediums recently due to physical constraints and cost. In addition to bronze sculptures being heavy and arduous to move, producing them is an expensive endeavor. Ever evolving his work, Baron has begun making assemblages with toys, locally sourced tree roots, and dolls he collects from flea markets on the cheap. Baron says making art is therapeutic for him — so he’s found a way to keep doing it — and his love of the human figure drew him to working with the dolls. 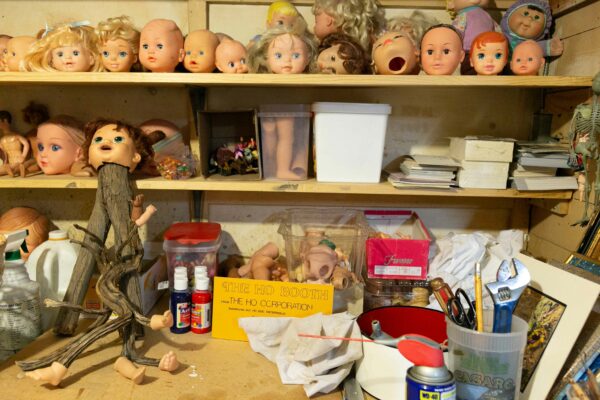 Never afraid to reveal his tricks, Baron explains that to create the interesting patterns on the bodies in his sculpture The Distortionist, he’s placed Indian jewelry into molds. In other works, he’s utilized picture frames, mannequins, and taxidermy forms as armatures.

“I don’t criticize somebody who labors over their art. I do labor over mine, but it’s just a different thing than someone who paints and paints every hair. I’m not trained. I never wanted to be trained. I’m just playing around,” Baron says. 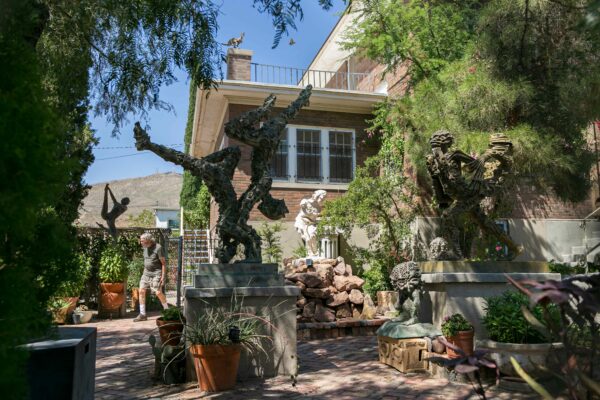 A creative streak is something Baron shares with other family members; his father introduced him to photography and he had access to a darkroom growing up. Baron was born in Chicago in 1941. He moved to El Paso at age nine, where he later attended highschool with fellow sculptor Luis Jiménez. He stayed in the city until he graduated from UTEP in 1963 with a degree in English. Baron would go on to receive Master’s degrees in English and Library Science from The University of Arizona and UT Austin, respectively.

Baron traveled and worked various jobs in his young adulthood: in Brooklyn, as a welfare case worker; in Antwerp, Belgium, where he was a part of a “cartoonist commune”; and in Nigeria and Ethiopia as a member of the Peace Corps. He then moved to Philadelphia to work as a librarian at one of the city’s smaller branches. Not making much money, Baron decided to move back to El Paso and take up a job in Dave’s Loan, a pawn shop that had been owned and operated by members of his family since the 1940s. Dave’s is famous among certain circles for housing Pancho Villa’s severed trigger finger, among other oddities and antiques. 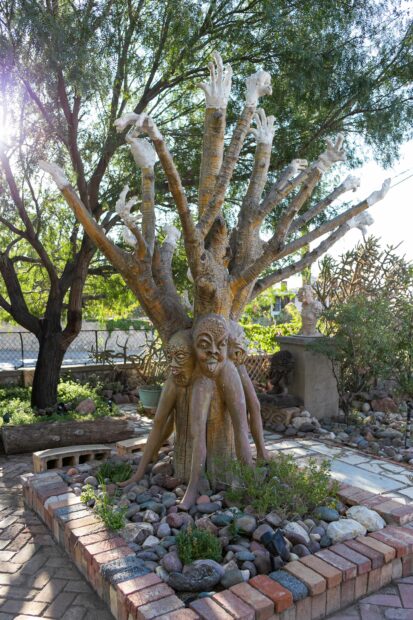 “I’m giving people books and I’m talking to them across the counter,” Baron says. “The pawn shop was a lot of fun actually. A lot of goofs, street people, and everybody’s got a story. And I’m pretty good at pulling stories out of people. I pry.”

This prying nature has led to Baron’s sustained political activism in El Paso, namely his letters to the editor in the El Paso Times. Ever the librarian, he’s printed and organized in a scrapbook every letter to the editor he has ever written.

“Reconstructing I-10 Downtown is a Bad Idea; The City has been Hijacked by Managers,” Baron lists off the titles of his letters. “I’m saying things that aren’t being said. I mean, they’re being said now, there’s a small group of people. This city has been really screwed over by the developers.” Baron reads more headlines: “El Paso Sold Out to Developers; Climate Crisis Single Most Important Issue; Rule of Law Doesn’t Apply to the Super Rich; Hispanics are Underrepresented in El Paso.” He reiterates, “I’m a strong voice here.” 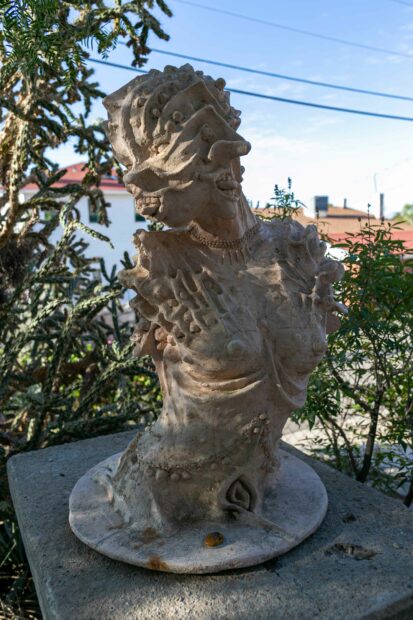 Despite its healthy population size, El Paso can be a pretty provincial place, says Baron. This has allowed him to be very involved with local politics. He is passionate about the goings-on of the local art and history museums, the administrators, and issues like the recent Mexican American cultural center controversy and the gentrification of downtown El Paso.

“I’ve been here for over 40 years and I’ve been vocal. I’m pretty well known in El Paso but it’s not like anybody’s gonna buy my art, but that’s another whole story,” says Baron. “I still write. I labor over my letters. I just labor, I don’t know, maybe it’s something in my 79-year-old mentality; I pick up pebbles on the ground. The eye cannot see the eye,” Baron laughs “Another cliché.”

In addition to amusing lines and clichés, Baron is full of offbeat anecdotes, like the time someone unwittingly stepped on a piece of plywood languishing in his garden only to have the opposite end of the board seesaw upwards and knock a penis off of a stone sculpture. 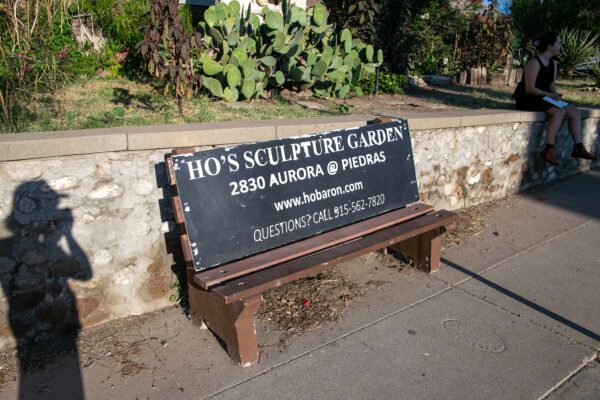 Baron’s imaginative sculpture garden and allegiance to making art are a must-see for El Pasoans and visitors alike. He is open every day from 8 AM to 7 PM, and also by appointment. And if you like your surreal sculptures with a side of sardonicism, Baron will not disappoint.

“I tell people, when they come here, do art all your life and study the sciences,” he laughs. “That’s not a line, though.”

“I’ve had a really good life. I’ve traveled. I’ve made art. I’ve had three wives,” he laughs. “That’s the down part, maybe. But as with everything there’s a beginning, a middle and an end, right? That’s another one of my lines.”