This week’s installment, by Los Angeles artist Yunhee Min, is the last in this series of Sala Stories, though there are many more yet to be told.

In 1999, the year of Yunhee’s Sala project, she was just beginning to work with lean-to paintings built on site. Tugboat, as the exhibition was titled, was the prototype for what would become a succession of more and more ambitious ventures.

It was early times for Sala too. The scene in San Antonio had been “burgeoning” since the 70s, so by the 90s things were still pretty loose. At this time, I was fond of saying that Sala Diaz was in the heart of “the restaurant supply district,” in joyful mock of the gentrification that follows artists around, creating “arts districts” and the like.

We were anything but gentrified. One day I found someone asleep in the empty space behind one of the lean-to pieces. No harm done, so I let them be. They eventually woke up and left with a meek thank you. On another occasion someone had stashed their laundry under there. Never did get to the bottom of that one.

Recent searches for stray materials for Sala’s archive yielded a postcard from Tugboat with the setlist for the first Sala Diaz fundraiser scribbled on the back. This event took place in December 1999, a few months after Yunhee’s show. The entertainment was an Austin-based band I played drums in at the time, The Fundigs. Most of the songs were written by Paul Pfluger, who the same year, met Callida Borgnino one evening at Sala. Callida’s work had been selected by Alejandro for the inaugural show — December, 1995. She and Paul now live in Wimberley with their son Henry, a dog and cat, and a bunch of chickens.

BTW, we got “fundig” from Finnegan’s Wake — every page is profuse with band names. I’d like to leave it with the readers of this series to come up with a portmanteau suitable for Sala. 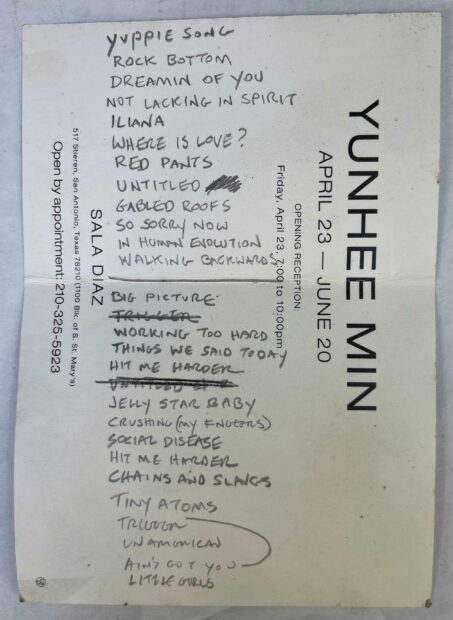 Some thoughts on Tugboat at Sala Diaz, 1999.

In the late 90s I started to make site-projects in addition to paintings. It was a way to both expand on the idea of what painting is and to involve architecture in more direct ways.

When Hills invited me to do something at Sala Diaz, I saw it as an opportunity to try to build this idea of a leaning painting as both object and architecture; that their relationship was inter-relational beyond the object/support paradigm.

I had been making hard-edged shaped paintings using “mistints” (custom-mixed house paints that were rejected). The shapes (trapezoids and parallelograms) were often used to imply a sense of spatial torquing of the painted surface that played with the perceptual expectation of the orthogonal rectangle.

You were such a sport to go along with the idea and to build those walls, Hills! 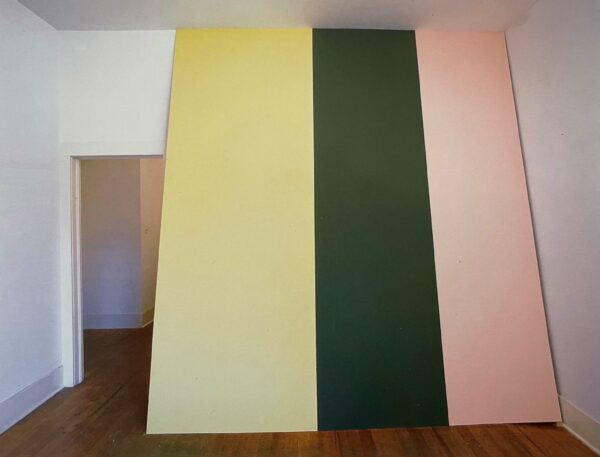 I really loved that exhibition, especially the domestic setting of the house as gallery. I remember the overgrown garden. For a passerby, one would never expect to find contemporary art in the house, let alone hard-edged abstraction.

The uncluttered, open, and experimental attitude/approach of Sala Diaz seems practically quaint nowadays. Labor of love for art and the making community was at the core.

Realizing this site-project in San Antonio was an important experience and generated opportunities for the further evolution for my work. Following my show at Sala Diaz, I made several leaning wall installations at Plug In in Winnipeg; Luckman Gallery and the Hammer Museum in Los Angeles; and the Yerba Buena Center in San Francisco. 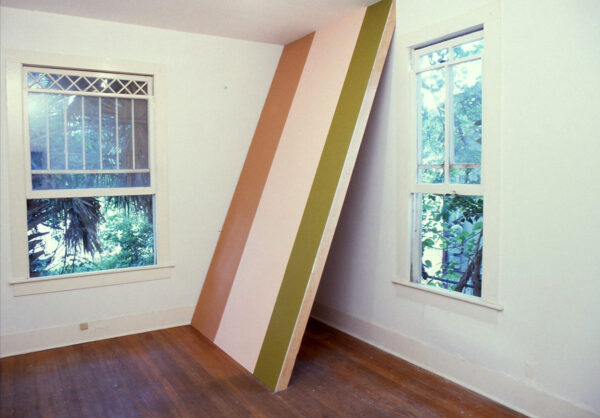 I returned to San Antonio in 2003/04 as a Visiting Lecturer at UTSA and lived some months in the city.  During this time, at Kate Green’s invitation, I made a window project for Artpace, Double Positive.

I have the fondest memories of San Antonio. Thanks Sala Diaz!

And, many thanks to the artists who volunteered to provide stories for this series; to Glasstire for running the stories; and to the two hundred and fifty artists and curators who have worked with Sala Diaz since 1995.