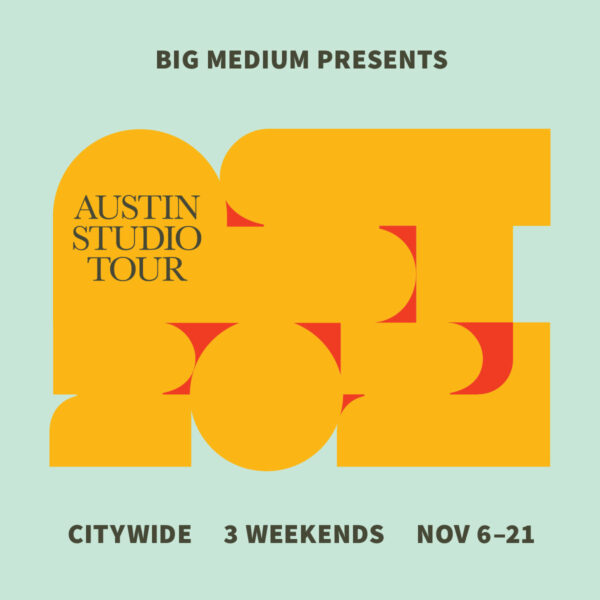 The Austin Studio Tour, an annual event that invites the public to visit artist’s studios, galleries, and public art projects on the West and East sides of Austin, will take place on three separate weekends in November this year. The event is organized by Big Medium, an Austin nonprofit art space.

The event is a combination of two separate annual tours founded by Big Medium: the East Austin Studio Tour (EAST), which normally occurred during two weekends in November and was comprised of artists and spaces east of IH35, and the West Austin Studio Tour, which normally ran for two weekends in May, and was comprised of artists and spaces on the west side of the same highway.

Both tours grew from humble beginnings: upon its founding in 2003 by artists Shea Little, Jana Swec and Joseph Phillips, EAST had just 28 participants. Sixteen years later, the 2019 EAST event had grown to host over 500 artist participants and 50,000 attendees. The 2019 WEST event featured 354 artists, galleries, and other participants.

For this 20th iteration of what is now dubbed the Austin Studio Tour, Big Medium is considering the safety of the artists and attendees with an expanded online platform that will include artist profiles, artwork images, artist talks, virtual studio visits, and demonstrations. This year’s tour will include over 530 Austin-based artists and collaborative groups. For more information and an online events program, visit here.

The event’s printed publication, which is normally available to the public at various locations across the city, has been redesigned as an art book, and will be available exclusively to artists, partners, and members. You can receive a publication by becoming a Big Medium member.

See below for the Austin Studio Tour’s dates.

Invasion of the Bug People (and Bug Art)