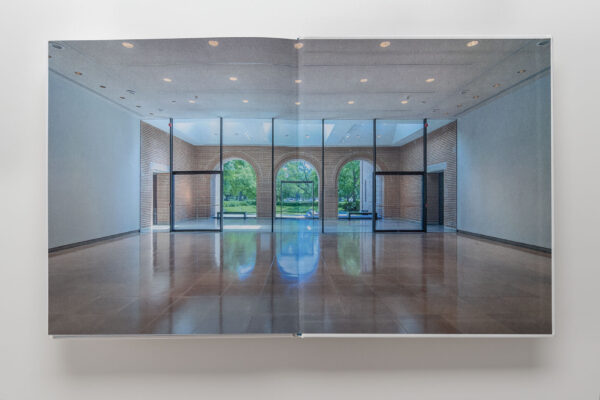 A spread from One Thing Well: 22 Years of Installation Art

This coming Tuesday, October 26th, the Modern Art Museum of Fort Worth will present a conversation between Kimberly Davenport and Rainey Knudson.

As part of the museum’s much-loved program, Tuesday Evenings at the Modern, the duo will discuss One Thing Well: 22 Years of Installation Art, a new book that chronicles 72 site-specific installations presented by Rice University’s Rice Gallery from 1995, when Davenport became its founding director, until the space’s closure in 2017.

The book features texts by Davenport, by Rice Gallery’s curator, Joshua Fischer, by art critic Dave Hickey, and by many others. The publication is edited by Knudson, who is Glasstire’s founder and original publisher.

In its time, Rice Gallery was unique in that it was one of few, if not the only, university art space dedicated to site-specific work. While this choice was initially at least partially because of budgetary limitations, it soon became Rice Gallery’s signature, influencing the thrust of all of the space’s shows.

Davenport worked with her selected artists — many of whom she showed before they found commercial success — to create immersive environments that viewers could enter, interact with, and view through the gallery’s wall of large windows. These artists included Tara Donovan, El Anatsui, Nicole Eisenman, Wayne White, Yayoi Kusama, Jonathan Schipper, Judy Pfaff, Soo Sunny Park, Mark Fox. Yasuaki Onishi, Kirsten Hassenfeld, and Andrea Dezsö, among many others.

Eventually, with the opening of Rice’s new Moody Center for the Arts, Rice Gallery closed. The space’s final exhibition, featuring wall drawings by Sol Lewitt, was a re-staging of its 1997 exhibition of the same works. The gallery’s former space, located just behind and to the left of the university’s large sally port, is now a university visitor center.

You can learn more about Rice Gallery at Davenport and Knudson’s conversation at The Modern, on October 26th at 7 PM. The talk is happening both in person and virtually — you can stream it here.

Rice Gallery: The App Needs You