A Return to Performance: Two Events in Dallas

While museums and galleries have been open for a while, performing arts venues are just now reopening with limited capacity. I recently had the pleasure of attending two newly reopened events, both of which required proper social distancing and mandatory mask wearing. Like the performances’ other attendees, I was thrilled to experience live art once again. 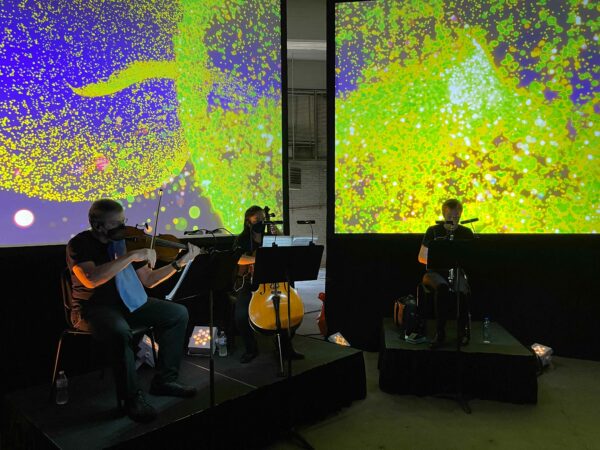 “Somewhere within our daily markings, somewhere within the words we speak….we’ve come to understand that our final destination, our purpose, our primary aspiration is simply…human connection.” Carmen Menza excerpt from Interlude 1 — Utterances/The Space on Either Side

Negotiating Dialogues is a five-movement modern chamber work for the clarinet, viola, cello, vibraphone and voice that addresses our desire for human connection. Using software algorithms, the live music triggers animated video projections, creating an immersive visual and auditory experience. Unlike most classical music concerts, (at least those I’ve attended), this performance included aspects of surprise and chance. Elements from the first movement were remixed, reconfigured, and replayed in subsequent acts, edited in real time, so the musicians and audience were hearing music that riffed on the original score. This re-editing continued in subsequent movements with interludes of spoken word performance. In the whole of the piece, the musicians and performers were in dialogue with the technology, requiring them to reflect upon how their individual parts contributed to the whole conversation as it modulated and transformed. Perhaps inadvertently, this reminded me of how only a multiplicity of voices and perspectives can create a full narrative. 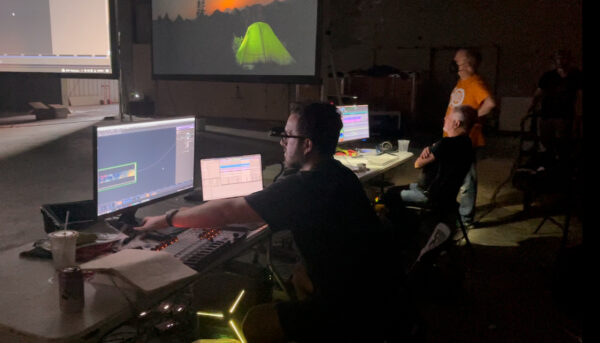 A behind the scenes rehearsal of Negotiating Dialogues. Photo courtesy Carmen Menza

The work is very technologically complex, which contributes to the viewer’s magical experience. I didn’t focus on the technology or how it worked — the process itself didn’t steal the show. Instead, as the visuals projected on the screen and the music began, I was transported. As the projections moved throughout the room, I thought about space and artificial intelligence — the stars, planets, and organisms, (human and otherwise), from unknown galaxies. I saw DNA sequences and moving color fields. As opposed to the traditional passive viewing/listening experience of a concert hall, where the orchestra is far removed from the audience, we were able to walk through the space, come close to the musicians, and see their hands, mouths, and facial and bodily gestures as they played. We, the audience, were silent, but we were one with the musicians and one with one another. I felt a collective sense of awe and wonder among the attendees, despite the heat and discomfort of wearing masks; we were in silent dialogue with each another as we witnessed this performance. The culmination of the music, the visuals, and the audience was a poignant and moving experience, one that I will no longer take for granted within the context of the pandemic. 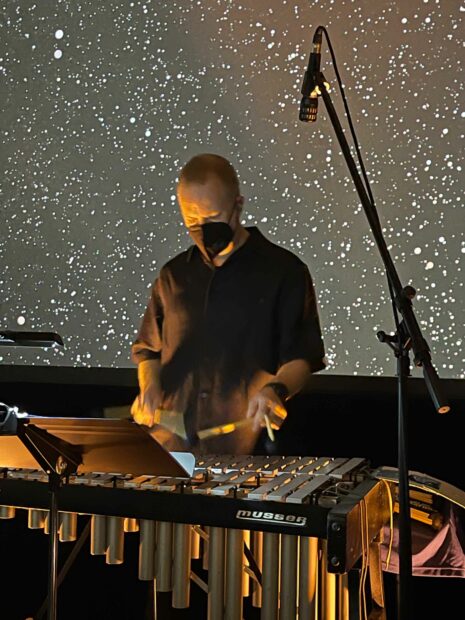 “In a world that is listening, we must ask the question, ‘How do we understand what joins us all?’ We are what we give each other.” Carmen Menza excerpt from Interlude 4 — Shared Memories 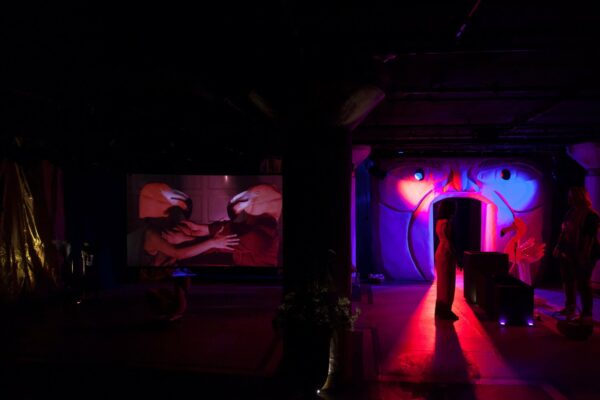 In the background video: Sarah Mendez and Alondra Puentes. In the foreground: Jenny Ledel and Mindamora Rocha. From Stronger Than Arms by Danielle Georgiou and Justin Locklear. Photo: Heather Alley, 2021

In this modern adaptation of Aeschylus’ third play from his Oedipus-themed trilogy produced in 467 BC, the city of Thebes is under attack and the chorus of Theban citizens, (played by an all-female cast), faces spiritual and moral conflicts. Georgiou writes that she saw this play performed twice in Cyprus — once in 2001, and more recently in 2017 as she sat in an outdoor ancient amphitheater over the unearthed ruins of Kourion. Overall, the production surprised me and exceeded my expectations. The show’s multimedia aspects were signature Georgiou/Locklear. Two video screens alternated various projections: dancers reacting to the live performers on stage; a video game depicting Greek warfare; and a computer-generated scene of a Greek courtyard and fortress. There was also a projection of a Goddess speaking to her people. The videos and projections added subversive humor, but also provided additional context and visual interest to the single stage set. 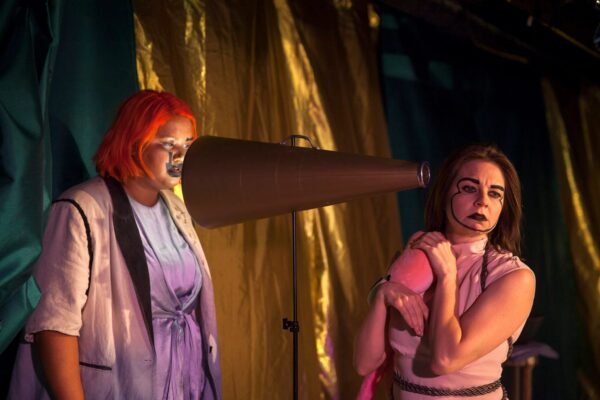 In a contemporary twist, I was surprised to see numerous representations of flamingos as part of the set. There were stuffed and inflatable flamingos, a flamingo rocking chair, and in the last scene of one projection, dancers all wore flamingo heads. This was not an homage to John Waters or a kitschy scenic detail; the flamingos are a powerful symbol in the play. The myth of the phoenix is rumored to be based on the flamingo, where the bird nests on a too-hot salt flat, sets itself on fire, and is reborn from the ash. Georgiou also shared with me that in ancient Greek times the flamingo’s tongue was a delicacy and was thought to give long life and have the ability to heal the wounds of one’s ancestors. 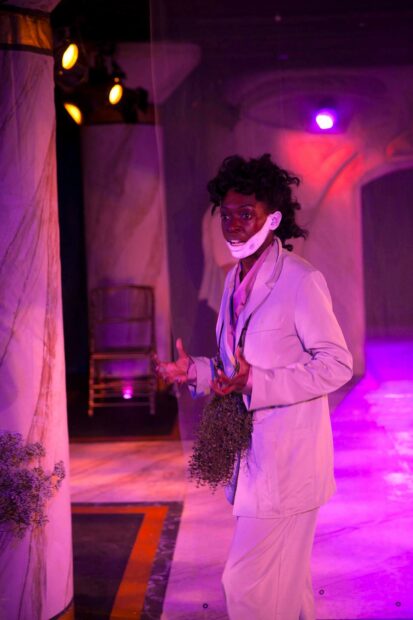 What might we learn from the retelling of this ancient text, and how might it relate to the socio-political events of our world today? I drew many correlations: the women in the play fear rape, enslavement and the loss of rights due to male power, which I can’t help but think about in relation to the recent abortion ban in Texas, which prohibits the procedure even in the case of rape or incest. What also came to mind was the Taliban’s takeover of Afghanistan, and the new government’s intention to methodically strip away women’s rights under Shariah law. 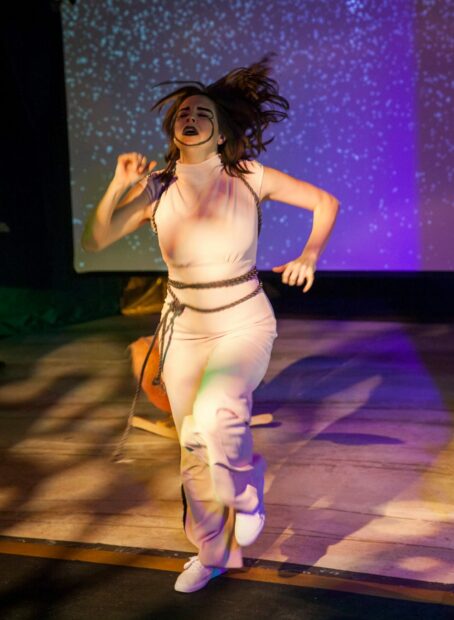 In the background: a projection by Taylor Cleveland. In the foreground: Jenny Ledel. From Stronger Than Arms by Danielle Georgiou and Justin Locklear. Photo: Heather Alley, 2021

The play’s title, Stronger Than Arms, comes from the phrase “fear is stronger than arms.” Fear paralyzes, and in its paralysis we cannot act. In the final scene of the production, as the dancers become flamingos (aka the phoenix), the play concludes on a hopeful note. Warfare, murder, siege, and corrupt plays for power continue, but we will survive; it is our responsibility to move beyond fear and take action.