EVERYTHING IS GETTING OBSCENE EXCEPT OBSCENITY: Ken Havis at Webb Gallery 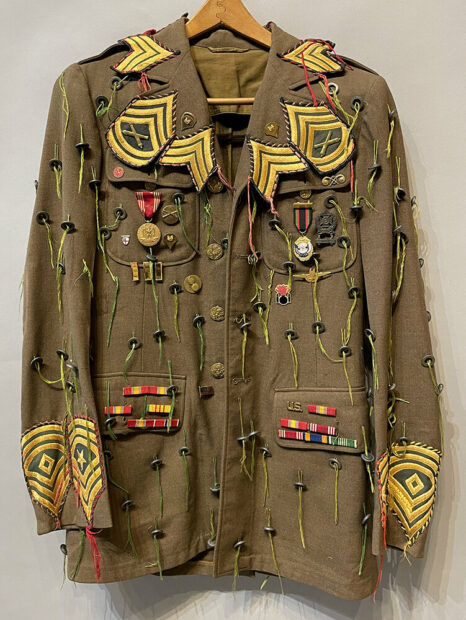 With the jubilant estate of Ken Havis on display as a shrine, of sorts, to the late great North Texas State professor of art, Webb Gallery in Waxahachie examines the counterculture of a younger Denton and a younger America, finding a depth of influence among a generation of Texas artists. 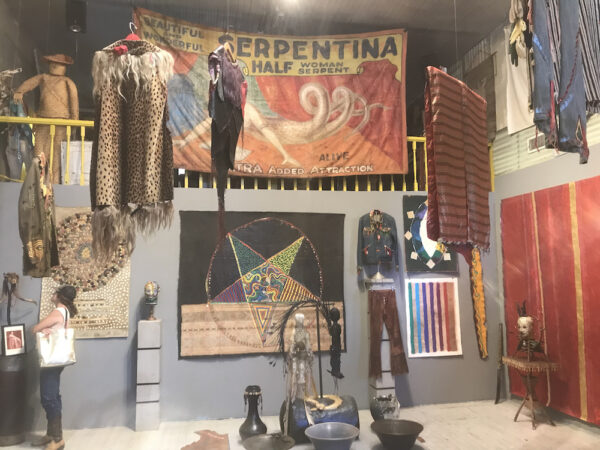 He was both an iconoclast and a Vietnam War veteran. Muddy truths about tension between the glory of individualism versus belonging to a tribe are eloquently carried by clothing that practically explodes from the gallery walls, from the ceiling, and out the gallery’s front window. One of the pieces hanging from the ceiling fell to the floor during the opening. No one was hurt, but someone said, “Ken’s here!” There was laughter but nobody challenged it.

Fashion waxes radical in Military Jacket Transformed (1975; see top of this page) and Ode to War Jacket (1975). The first, as its title makes plain, is the conversion of a US Army uniform piece into a satire of itself, its collar now cut to mimic the petals of flower-power, its ribbons and patches and bars sharing space with common household buttons, each of which spits a happy grass-green trail of thread onto the macho drab of army-green wool. This jacket is a battle for America’s soul, circa 1975. 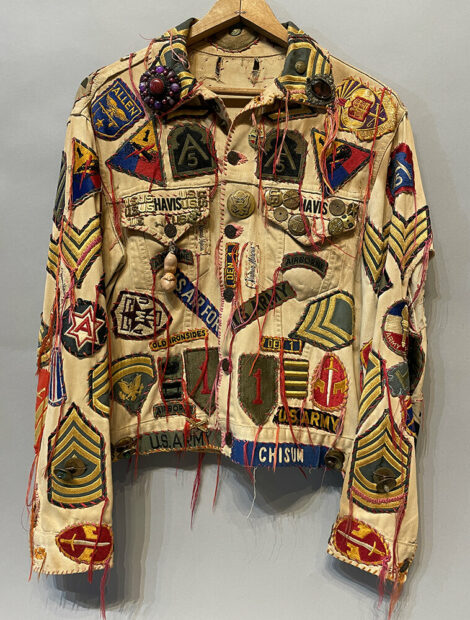 Ode to War Jacket takes a marvelously opposite approach that surprised me. At first glance, I assumed it was, like Military Jacket Transformed, and Army-issue garment. But it’s not — it’s Levi’s. A Levi’s cream corduroy jacket not-too-many-cousins-removed from a denim one that I’d wager is in your closet right now. Emblazoned with military patches, insignia, and found objects, the threads covering this piece are deep red, dangling like blood streams from war wounds. I made the easy connection on the human costs of battle, but the inversion of the two approaches also got me thinking. The worn and wearable pieces in this show would scarcely raise an eyebrow in Denton today, and if noticed at all, would earn compliments. Are emblems of a counterculture so different from military insignia? Don’t they both signal belonging? And what happens when one open mind spends time in both worlds?

In Havis’ case, it made him an artist. He credited the military with providing his earliest access to the exotic, wonder-filled mysticism of Eastern cultures that’s evident in his art making, as well as the confidence to pursuit art at all. The jackets, then, aren’t meant as political ironies; they’re autobiographies, loyal mixes of creation and context. Like the processes he used to renew these objects as new objects, my expectations of what meanings they must carry were thwarted, replaced with new meanings far less obvious than those I brought into the gallery on my own. And that’s the fun of it. 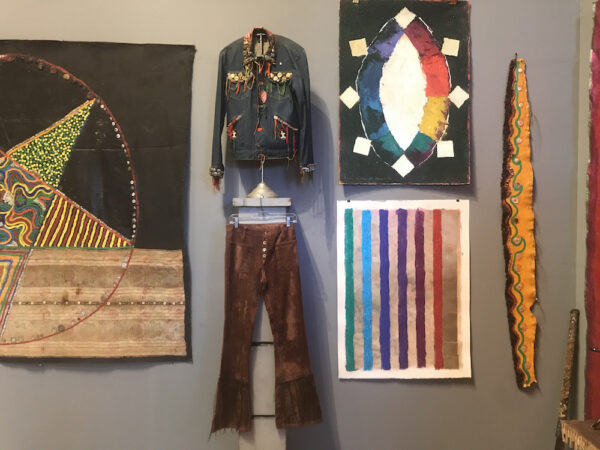 Havis’ biography mentions a “Fashion Play” staged in 1984, the same year the Metropolitan Museum of Art originated the fashion exhibition as museum blockbuster with an Yves Saint Laurent retrospective curated by Diana Vreeland. Now a staple on museum calendars as reliable moneymakers, fashion-themed exhibitions can leave some visual art purists sullen or bewildered. But this show includes fashion as an indicator of selfhood, and it’s a stronger, simpler argument for fashion as art. If you are one of the jaded, start here, in Waxahachie, and you may never again view your wardrobe as a pointless or obligatory antidote to nakedness. 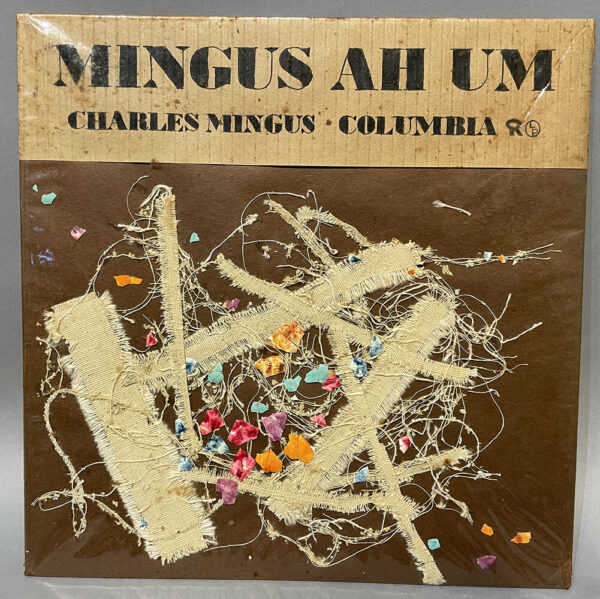 I focused on the fashion, but happily, there’s a lot more treasure to see here, including boxes of whimsical trinkets and my personal favorite, a Charles Mingus album cover given the Havis treatment. I looked for the original cover online for comparison and found several versions, but none looked like valid source material for this piece. I’m not certain that Havis’ “Mingus” ever began its life as a functioning album cover, and even less certain that it matters. 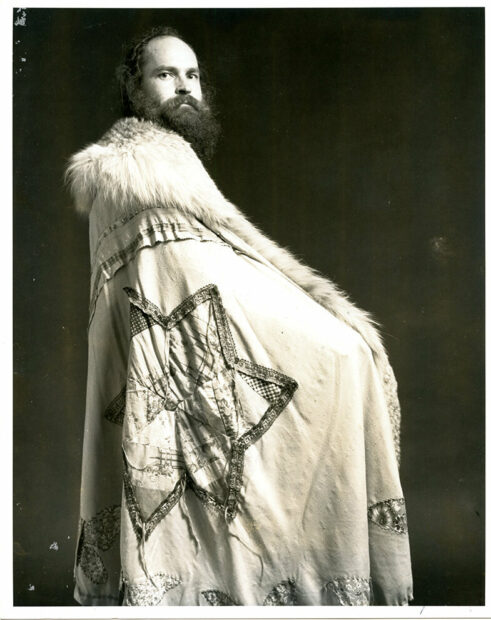 Havis, who taught and mentored out of NTSU (now the University of North Texas) in the 1960s and ’70s, produced a body of work unlimited by an object’s original function, if it had one. But a previous existence wasn’t required, either. Whether with stuff that wasn’t art before, or stuff that always was, Havis turned everything he touched into playful chaos. In a quest for the sublime conversion of his life into a work of art, the resulting cacophony is still effective three decades after his death. Textiles, buttons, feathers. Trinkets, wood, paint. You thought you knew this too-familiar object, but look again, be dazzled. The discarded became decorative on walls, clothing, floors and furniture.

It’s a simple idea to reuse the stuff stored in junk drawers, closets, or home garages to revivify objects, much as a gifted chef can create a whole meal from whatever’s in the pantry on a given day. So what could Havis have done with all the discardable crap that’s in your house right now? Or better yet, after being charmed and lulled by his work, what can you make with all that stuff? No matter your point of origin, any junk drawer or garage could become a palette or a playground.

That’s what’s knowable for a stranger, like me, to Havis’ world, but the opening was packed with artists and others who knew him and loved him. He exhibited artwork from the mid-’70s to the early ’80s in such notable institutions as Laguna Gloria, New Orleans Museum of Art, Art Museum of South Texas, and Contemporary Arts Museum Houston. 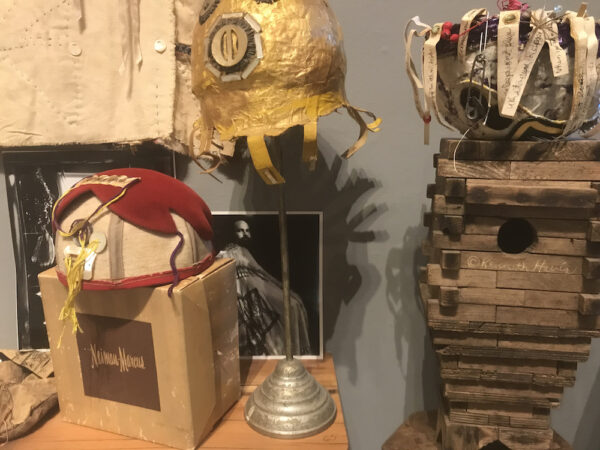 Ken Havis died of AIDS in 1993, but I left Webb Gallery that day believing that if he’d been at this opening in body as well as spirit, I might be walking into the mean streets of Waxahachie ready to glue, sew, and glamorize my car interior and, with whatever sequins I had left, transform I-35 back to Dallas into a different kind of runway. Even now, I’m questioning what’s holding me back.

Through Nov. 21, 2021, by appointment at Webb Gallery, Waxahachie

Thanks for mentioning Bob.

Mark, I can’t guess which Mark you are that I partied with at Ken’s place, back in the day.
Frances

Wonderful article about Ken, thank you!

Thank you Julie and Bruce Webb for mounting this important exhibition. Ken Havis was a major “influencer” back in the day. He created an environment and atmosphere of creativity that he generously shared. While challenging boundaries in all directions he was always a warm, giving and caring human being.

Ken was a somewhat reluctant mentor to some young artists because he really believed teaching was more a matter of being authentic and therefore he WAS a teacher by example. I was a high school drop out, a creative but troubled kid and he kept an eye on me from the sidelines and encouraging me all along. Great show and tribute!

Terrific to pay Ken Havis tribute!
1st saw his Levi jacket at DeYoung museum when driving up to Portland thru San Francisco in 1975. Never imaging I’d be taking his class in 1981!
I took his Professional Practices class @ NTSU back in the ‘80’s. He allowed I bring in a self proclaimed “curator” for show in a motel along Arlington’s Hiway 360.
He brought in his wife and tried answering class questions regarding his experience & insurance for art works. Ultimately giving credit to God for being chosen for the job.
Thus, we started learning about which ones to avoid.
Really great teacher and party host!

I had him as a teacher at NT. At that time he was embellishing boots. I’d love to see some of those.