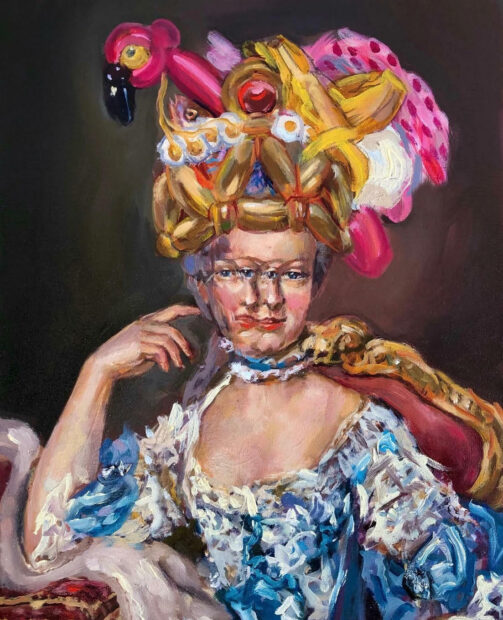 I feel lucky to be able to finally sit and chat with Ana Hernandez. After selling out her show Let Them Eat Cake at San Antonio’s AnArte Gallery, she’s preparing for her first whirl at Art Basel Miami.

“I’m really interested in how women are depicted,” she says. “With these paintings, I would copy portraits and just put a twist on it. I don’t want this to sound like a cop-out, but it was sort of instinctual.” There were some portraits of blow-up dolls, but more recently she has turned her critical gaze on Rococo portraiture, with its excesses and femininity both underscored and lampooned.

The vast majority of Hernandez’s paintings are women, wigs piled high. In one piece called Too Much? a woman’s face is superimposed on itself, and her wig is crowned with a balloon animal shaped like a flamingo and a string of eggs, sunny-side up. The rest of the painting plays it straight, and the effect is ferocious and hilarious all at once. In other paintings, women in voluminous dresses alternately seem to embrace or be menaced by flamingoes, bananas, and flowers.

This attention to portrayal of women is an inherent result of Hernandez’s childhood — “I was raised by a single mom. I’ve been around women my entire life. My mom was always one of those ladies who does herself up. In Laredo, you put on heels to got to HEB. I like how pretty women are, and there are so many details; they can decorate themselves in so many ways.” 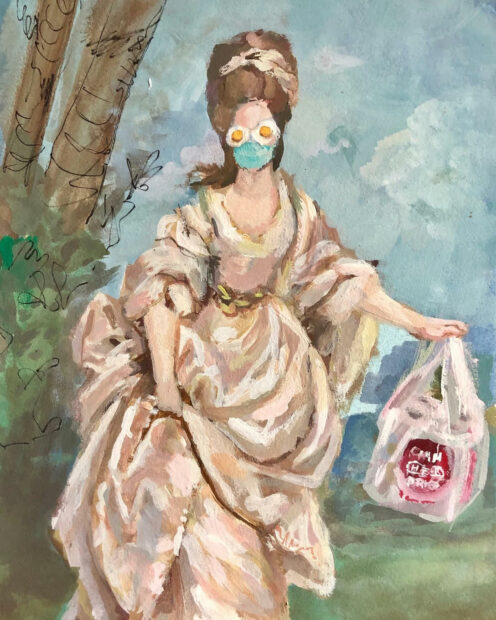 One of the recurring motifs that she uses to decorate the fancy 18th century women in her paintings is by covering their eyes with eggs. San Antonio artist Jacinto Guevara loves them, telling me that the eggs do double duty: they serve as “egg on the face” of the bourgeoisie, but also in their more traditional role as symbols of fertility.

I ask Hernandez about the eggs. She says, “They mean so many things to so many different people. They just punctuate things.”

The eggs are, of course, as Guevara mentions, a send-up, but in a way, Hernandez is including herself in the owning: “I remember when my professor said never to take yourself too seriously. And with all of the pretty dresses, it’s like, ‘Oh my god, it looks like you’re trying too hard. Just put the eggs.’”

But the egg on the face of bourgeois women in the paintings also feels like a challenge. The critique is not against the femininity represented in the paintings, but more the excesses of their wealth. The series is thus engaging, accessible, and sly in its cultural critique.

Two recent murals in San Antonio address violence toward Latinx women. Presente, in which Hernandez served as an assistant artist, addresses the killing of Claudia Patricia Gomez Gonzalez, a Guatemalan woman who was migrating to the United States in 2018 when she was killed by the US Border Patrol. 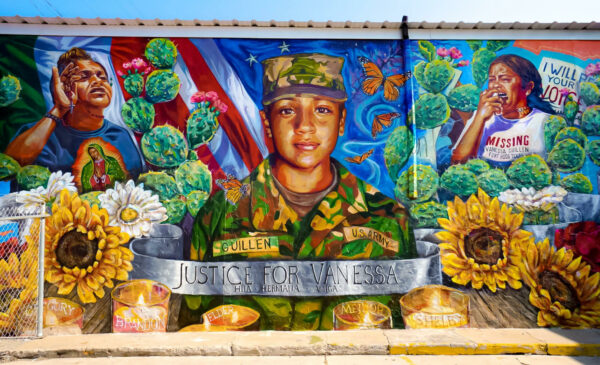 Hernandez also served as co-lead for the 2020 mural dedicated to Vanessa Guillén, one of the more beautiful memorial murals that popped up after the soldier’s disappearance and death last year. The mural was a culmination of grassroots organizing and fundraising by alumnae of the Latina Leadership Institute, Stephanie Melchor and Tracy Talavera. Through their network, they connected with Hernandez and another muralist, Adriana Garcia. In this work, Hernandez is serious.

Uvalde-based artist and professor Abel Ortiz gave Hernandez her first one-person show in 2015, and credits a trip to Mexico City studying muralism as a transformational experience for Hernandez. According to Ortiz, “Her ability to stitch together iconography from different times and spaces is part of her creative process.” Thus in the Guillén mural we see motifs such as Monarch butterflies, who make appearances in her studio work as well.

Despite the unifying motifs in all her work, the tension between the seriousness of the murals and the surreal fun in her studio work seems to make Hernandez uncomfortable: “How does this work when I’m making murals about women being murdered and then I’m also working on this other stuff? I can’t help but be like, ‘Am I on the right path?’”

Genieve Figgis, the Irish artist who has her own malevolently funny take on Rococo art, might argue that the path is very right indeed. Although Figgis’s style is very different from Hernandez’s, her popularity is a testament that revisiting European art and working through its ritual displays of wealth and power through reinterpretation is valuable. Figgis applies an Irish lens; Hernandez a US-Mexico borderlands lens.

A borderlands sensibility runs through her work. Abel Ortiz says, “There’s a mixture of a Eurocentric imagery but also with pop culture imagery, more universal sorts of objects like inflatable flamingos. But sometimes you’ll see a regional beer can, Lone Star or something like that. And that brings us back home. You know what I mean?”

In considering Hernandez’s refiguring of Rococo portraiture, it might be useful to consider Marie Antoinette herself. While many of us associate her with cavalier excess, she exerted her will in ways that continue to hold our attention. Marie Antoinette presented her femininity in a straightforward and uncompromising way that shocked the royal court. An attraction to historic performances of femininity and an interest in social justice for Latinx women do not necessarily contradict each other, as Hernandez worries; they are different expressions of the same subject. Her work produces no jarring tonal clashes — it is integrative with her experiences and interests, incorporating identity, class, and place in each piece.

After Hernandez debuts her work as Art Basel Miami, I hope she will continue exploring as many different facets of femininity as she can. Marie Antoinette’s favorite portrait artist, Elisabeth Louise Vigée le Brun, fled France during the revolution but remained a popular portrait artist who supported her family. Let Hernandez find the same freedom!