The Rockport Center for the Arts (RCA), an art space located in the coastal town of Rockport, Texas, has announced that it has recently acquired two new sculptures. 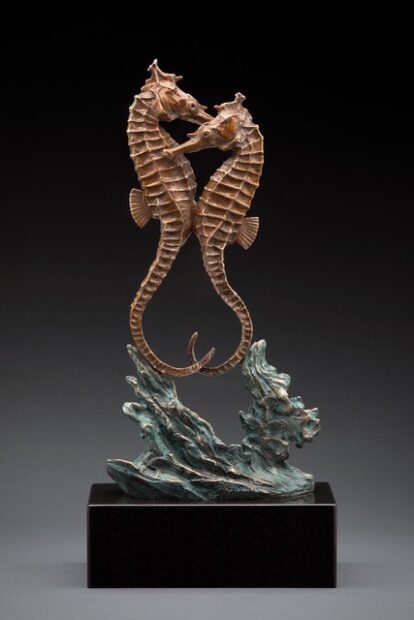 The first piece, which the organization announced back in mid-August, is a sculpture of a pair of seahorses by Padre Island-based artist Kent Ullberg. Monumental in size, the eight-foot bronze sculpture comes to the RCA through an anonymous donor, and will be displayed in the forthcoming 16,000-square-foot outdoor sculpture garden of the organization’s new building. The piece, titled Merry Time Romance, is Ullberg’s third sculpture in the RCA’s collection — his other two works include Preening Heron, a five-foot tall abstract sculpture of a bird, and Rites of Spring, a thirteen-foot piece depicting of two whooping cranes.

At the beginning of September, the RCA also announced that it has acquired a new sculptural work by Colorado-based artist Kathy Wardle. This piece also comes to the organization through an anonymous donor, and will be displayed near the RCA’s new campus. Titled Beach Day, the bronze sculpture was “conceptualized by the donor, the artist, and RCA with Rockport in mind,” and depicts a family of five walking toward Rockport’s beach.

The organization’s acquisition and commission of this piece has been in process since 2019, when the RCA approached six artists to present concepts for a sculpture. Wardle’s piece ultimately won out. Luis Purón, the RCA’s Executive Director, noted that her sculpture “surfaced as the strongest candidate because the concept was specifically tied to our community.” Wardle is casting the piece with the goal of having it completed by December 2021.

Currently, the RCA’s public art collection numbers 17 pieces. Some of these works will find their home around the organization’s $8.7 million campus project, which is underway and slated for completion in August 2022.