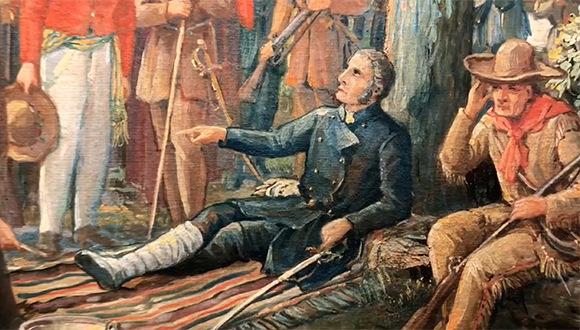 Via Longview Museum of Fine Arts:

From iconic portraits of cowboys to paintings depicting the rural landscape, Longview Museum of Fine Arts invites patrons to experience “The American West” in a new exhibit.
The exhibit, which is on display through September 25, features artwork curated from two private collectors in the Dallas-Fort Worth area. This phenomenal exhibit tells the story of “The American West,” offering a glimpse into Texas history and heritage.

ARTISTS ON DISPLAY
The exhibition includes such names as Teal Blake, Sophy Brown, John Cowan, Otis Dozier, Victor Higgins, Alexandre Hogue, Harry Jackson, Greg Kelsey, Perry Nichols, Frank Reaugh, Porfirio Salinas and Xiang Zhang. Some of the artists on display include members of The Dallas Nine, a group of artists who were active in Dallas and who received nationwide acclaim in the 1930s. The Dallas Nine started when a group of nine young artists, including Dozier and Nichols, displayed an exhibit called “Nine Young Dallas Artists” in 1932 at the Fair Park Dallas Public Art Museum. A review of the show in a New York publication drew attention to the Dallas art scene.

The group referred to as The Dallas Nine would change some faces over the coming years as the art scene evolved. Hogue is among the most notable artists in the group. Hogue received national attention in the 1930s when he depicted the effects of a drought that devastated the Great Plains. He later produced a much-publicized water erosion series and in 1937 an oil industry series for Fortune magazine.

NON-NATIVE ARTISTS
Other featured artists, such as Zhang, did not grow up in Texas but were inspired by the western landscape after moving to the state. Zhang grew up in China and went on to receive a master’s degree in Fine Art from Tulane University in New Orleans. Upon graduating from Tulane, he moved to Texas where he nurtured a love for painting horses and portraiture and went on to develop his special style of western art. Zhang’s work combines impressionistic and realistic techniques, and he became a force in western artwork. He is known for his realistic depictions of historical events captured in large compositions such as “The Oklahoma Land Rush,” “Arriving Fort Worth,” “Austin Drive,” “The Sooners” and many more.

Other work on display includes five, large-scale depictions of iconic scenes in Texas history by artist Raymond Everett in 1912. Everett originally created the artwork for The Rice Hotel in Houston. The paintings depict such scenes from Texas history as the Alamo, the Surrender and the Texas Capitol building.

LMFA celebrated the opening of this beautiful exhibition with a reception, which was held July 17. Museum patrons enjoyed viewing the artwork and learning about Texas history in the process.

In addition to the special exhibition, LMFA has thoughtfully selected pieces from its permanent collection to display in an exhibit titled “Early Texas Art Revisited”. Artwork currently on display from the permanent collection includes iconic works and artists from Texas history.

There is a strong link between art and history as artwork helps to share the story of our collective past. It is LMFA’s hope that this special exhibition of “The American West” not only gives the community a chance to experience Texas art but also to learn about the state’s fascinating history.

Five-Minute Tours: Diane Durant at the College of...