Heroes Hidden in the Everyday: An Interview With Austin-Based Film Duo Patrick Bresnan and Ivete Lucas 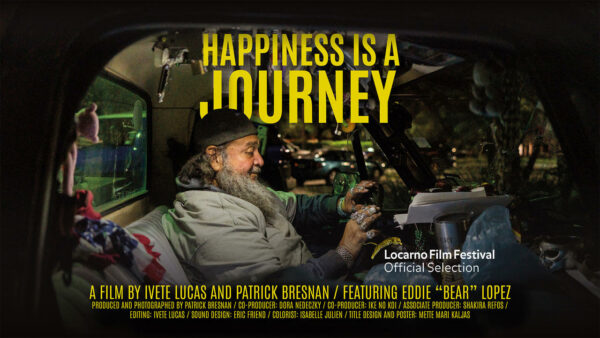 In Happiness is a Journey, filmmakers Patrick Bresnan and Ivete Lucas follow Eddie “Bear” Lopez, a 60-something, self-described paperboy, who has delivered newspapers along his East Austin route, seven nights a week, for more than 20 years. Lopez has never missed a single shift. In fact, he may very well outlast the newspaper industry vanishing before him.

The 12-minute short, which is set to premier at the Locarno Film Festival in Switzerland this month, first appeared as a video installation at Austin’s Big Medium in 2019. That show, of the same name, depicted the death of print media through a post-apocalyptic tableau of discarded newspapers, tipped-over racks, and tchotchke shrines of yesteryear, made by Lopez himself.

Bresnan and Lucas have documented a single evening in their film — Christmas Eve 2018 — at the Austin American-Statesman building, as nocturnal newspaper carriers rush to roll papers before heading out on their (disappearing) delivery routes. What the film reveals, beyond the manual process of ensuring such a product, are the cracks of system failing to protect those who deliver that product: a subtitle at one point indicates that carriers earn 22 cents per paper.

There is no official dialogue in Happiness, only the busyness of a warehouse, and backdrop of Christmas classics, as workers repetitively slip paper into plastic. The film’s second half slows to capture Lopez making his deliveries; rumbling along predawn streets in an old pickup truck with his spindly companion, an ancient chihuahua named Star. Bear’s long flowing beard and thickly stacked skull rings exude a touch of thrash metal, but his gentle demeanor and quiet dignity embody the film’s poetic message: happiness is a journey … not a destination. 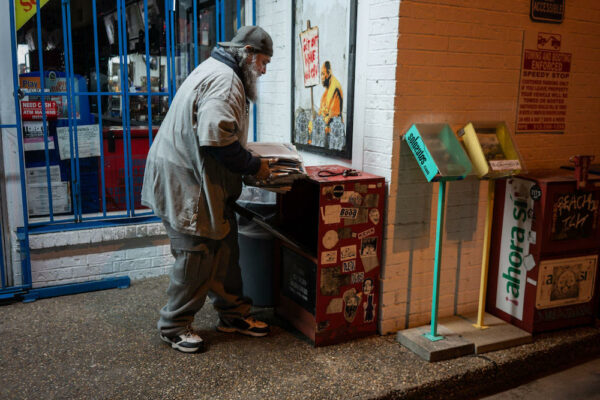 Patrick Bresnan: Bear is a newspaper carrier who works seven days a week out of the Austin American-Statesman warehouse, which sits on one of the most valuable pieces of real estate in all of the United States: Congress Avenue and Lake Austin. He goes there every day at 6:30 pm, and sleeps in his car so he can be the first in line to receive the newspapers, now printed in San Antonio, that arrive in Austin between 11 pm and 1 am.

Ivete Lucas: He calls himself a paperboy, and I think we have a nostalgic idea of what a paper boy is, someone who is young getting extra cash, but the modern paper delivery people are doing it to survive. They are contract workers, not employees, per se. They don’t have benefits, and they must work every day. But Bear loves what he does.

BP: So these delivery people don’t get any time off?

PB: Bear says the only day he can take off is if he’s arrested or dies. When we were filming, several memorial signs were taped to the wall, commemorating the life of a newspaper carrier who had just passed away. It’s very difficult for someone else to come in and just pick up a route, and do it in an economically feasible amount of time. A single route can cover 150 miles, and it has to be memorized. It’s a catastrophe for the person who organizes the newspaper delivery if a worker doesn’t show up. They have to scramble to find someone to fill in — or do it themselves.

IL: When you’re an independent contractor in this gig economy you’re your own boss — but not in the great sense of the word. If you don’t do it, nobody will do it for you.

BP: How did you first come across this newspaper subculture?

PB: Our old office was in the Austin American-Statesman printing warehouse. We shared it with the Rude Mechanicals Theatre Company, who had lost their space on the east side because of gentrification. They inhabited what used to be the lunchroom of the newspaper printing press operators, and there were two offices in the lunchroom. The Rude Mechs subleased that to artists; we were lucky to get one. We were there six days a week, editing our film Pahokee.

BP: Speaking of Austin’s real estate frenzy, the Statesman building has been sold to make way for a massive mix-use complex. Are these workers still on site?

PB: The Austin American-Statesman kicked the newspaper rollers out of the interior space into the parking lot. If it’s raining, they have to look for shelter, though I believe there’s a porta-potty for them. As newspapers dwindle in subscriptions, the people who deliver them take the brunt. They’re constantly renegotiating the pay rate; they’ve also started charging the carriers for the bags the papers go into on rainy days.

IL: What we’re seeing in this film, and what we’re talking about — and what has not been talked about enough — are these pitfalls of capitalism and the free market. As print media gets less and less desirable for people to continue to pay into, the people working those jobs get less and less income to survive. People are falling through the cracks of a system that expects them to have the same capacity to pull themselves up by the bootstraps as these big companies.

Still from “Happiness is a Journey” by Ivete Lucas and Patrick Bresnan.

BP: Can you talk about your choice of using split screen in the film?

IL: As a medium, film and video plays with time, and splitting the screen allowed us to be in different spaces at the same time. There are two parts: the rolling of the newspapers and the journey of delivering them. The first part is about taking in everything, and the second part is about expanding time and space. All of our films are experiential — we’re always trying to find a way of conveying to the audience a feeling of being in a place. We trust the audience to understand their own journey through that experience. 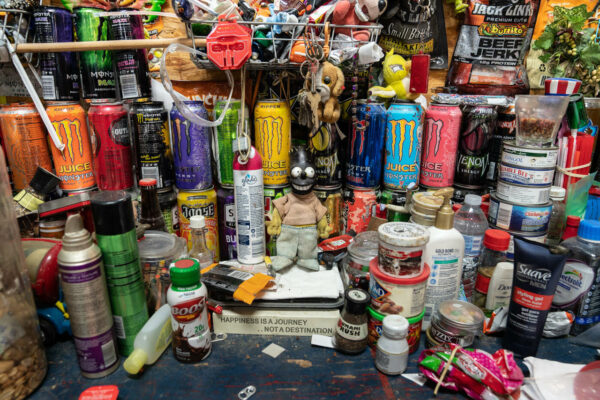 BP: I love the colorful shot of Bear’s “Happiness is a Journey … Not a Destination” desk sign. What about the accompanying Bart Simpson doll and altar of Monster Drinks?

PB: What’s so beautiful about Bear is that he’s very childlike. He lives in the same room that he grew up in; all of his sisters have maintained their parents’ house because that’s where “Little Bear” lives. I think you see in his shrines, that he’s never lost this childlike love of life, and he wants to share that with people. He’s also very artistic, which is why we had his shrines all over the gallery [Big Medium] in the group show with the three of us. I feel they have a lot of meaning for him: each piece is something he’s collected along his 20-plus year journey of delivering the paper. He became a newspaper delivery person to have something to do every night, so he wouldn’t drink alcohol. Energy drinks helped him transition into a new lifestyle, so he keeps them around as a remembrance of the path he’s on.

IL: It’s very beautiful, how he builds with what he collects along the way, as a way to materialize his life path. 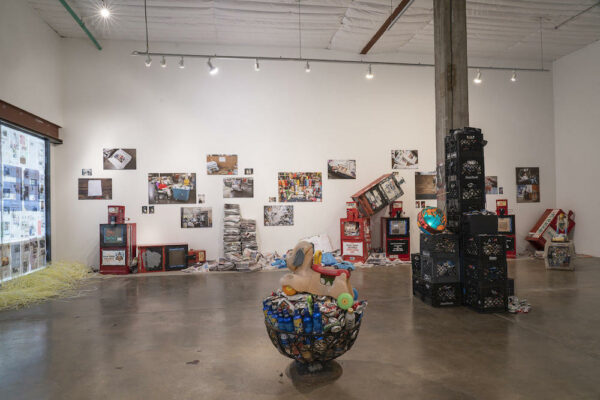 BP: You recorded Bear two and half years ago: have there been any notable changes in his routine since then?

PB: Star, his beloved chihuahua, recently passed away [she rode with him for over 20 years]. And a lot more modern houses have gone up in Bear’s neighborhood. We were very interested with Happiness in showing the gentrification of East Austin, but it doesn’t always come across because of how dark it is at night. Bear doesn’t deliver the papers in that truck anymore; it can’t make the journey, so he bought himself a red Chevy Impala. He’s been very concerned about COVID and his coworkers. But otherwise, he’s still the same Bear.

BP: You mentioned your feature-length documentary Pahokee earlier, which premiered at Sundance in 2019. As you move in a new direction, why do you suppose you’re still drawn to making short films?

PB: After grad school, we had spent six years making a feature film that never saw the light of day. So we started making short films that would not be a years-long process to edit. We became interested in the idea of one heroic day, where everything was happening at a heightened scale, and there was no need to interview people because everything we were seeing onscreen said everything.

IL: When talking about the hero’s journey, someone might think in epic proportions, but the truth is we have seen things in everyday life that are hidden from our consciousness that are heroic. Some of these journeys are things that are happening every single day for a person; we want to show the efforts of people who are working hard to make it in this world. Those things should form a part of the lexicon of what it means to be an American in the present day.

“Happiness is a Journey” will be screened August 9, 10, and 11 at the Locarno Film Festival in Locarno, Switzerland.