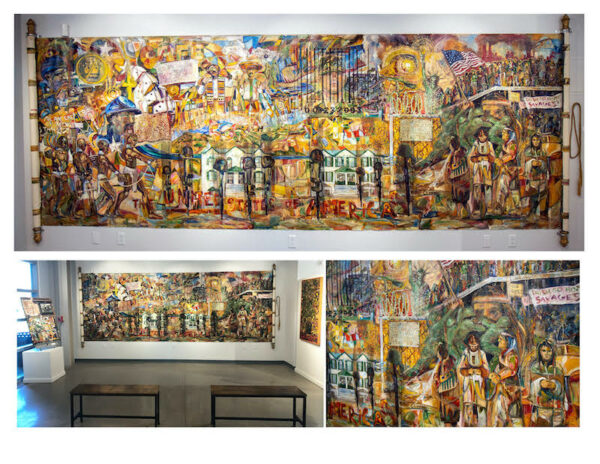 Juan Galceran, an El Paso artist who has made work for Steven Spielberg and Tim Burton, among others, was slated to hang his mural The United States of America in the El Paso airport in 2005. The work depicts a much-publicized ambush during the Iraq War where a Juarez-born, 18-year-old soldier, Ruben Estrella-Soto, was killed in action.

The United States of America speaks to a history of the displaced, and includes images of bound Native Americans, Black people in bondage, and campesino Mexicans working as migrants. Galceran says of the piece: “ So many of the soldiers in this war — like in other wars — are minorities. Their people have suffered racism, or still do, and despite all that, so many are willing to sacrifice their lives for this country. That’s an important statement.”

Differing viewpoints on the frank and unsentimental imagery have prevented the exhibition of The United States of America at the El Paso Airport, and the mural has not been publicly displayed since. The mural is now part of Mystic Bonds of Places and Time, a solo exhibition of Galceran’s paintings, videos, and a combination of both he calls “Textured Momentism,” at Stanton Gallery in El Paso through August 27th.

Just a note to say that I’m proud to know you and happy to see your mural come to fruition…Orale.

As your best friend for 40 plus years, I’m really proud of you and what you have accomplished this is one of my favorite paintings it is nice to see it on display congratulations. Antonio Vargas

hello Mr. Galceran, wow!!!
my favorite was your piece called The End, specifically a small framed foto of an old car, the words “who of all these are you? a grain of sand, space or time” really left the thinking, but truly every piece is magnificent 🙂