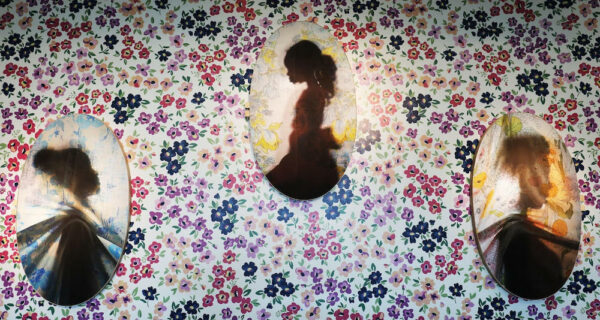 Work by Letitia Huckaby at the McNay

Limitless! Five Women Reshape Contemporary Art feels like the first warm day after a long, hard winter. On view at San Antonio’s McNay Art Museum, the exhibition is an easy way to get your art on if it’s been awhile. Installations by Letitia Huckaby, Sandy Skoglund, Jennifer Steinkamp, Martine Gutierrez, and Yayoi Kusama offer a cross-generational female perspective spanning 60 years.

“We were founded by a woman, and have a history of exhibiting and collecting work by women,” says the McNay’s head curator René Paul Barilleaux, who organized the show. “We also wanted to look at innovative ways of presenting these works outside of the traditional museum format.”

Limitless! is the museum’s second exhibition in which the pandemic played a part. “We were careful not to have any touch points, but still wanted it to be interactive,” says assistant curator Lauren Thompson. (A dance-along video in the middle of the gallery introduces some basic moves for those who feel inclined.) “TikTok has been a way to connect, so having this in the space fits with what’s going on in the world.”

Letitia Huckaby’s Koinonia (2021) is a large-scale installation that greets visitors in the museum’s main lobby. Commissioned for Limitless! and subsequently purchased by the McNay, it features five photographed silhouettes printed on light fabric, each held by an embroidery hoop hanging on floral wallpaper. The cameos represent the five schoolgirls, four of whom were killed, from the 1963 16th Street Baptist Church bombing in Birmingham, Alabama. Koinonia is a Greek word which loosely translates as “Christian fellowship” or “spiritual communion.’

Huckaby, who lives in Fort Worth with her husband, the painter Sedrick Huckaby, says her photo-based work addresses the long history of injustices against African Americans in this country. “I am not an in-your-face political artist,” she states, “but I see politics in everything I do.” Inside the exhibition space, an empty embroidery hoop hangs in front of that same floral wallpaper pattern from the lobby. Visitors are invited to step into the oval frame for a portrait of their own, perhaps connecting in some way with this concept of Koinonia. 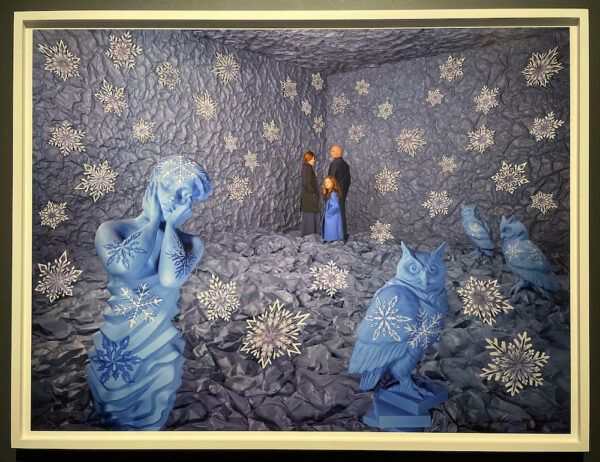 Sandy Skoglund’s Winter (2018) is the exhibition’s official entry point, a 3D-printed monochromatic stage set that took 10 years to complete. Consisting of a crinkled ice-blue backdrop, jagged snowflakes, watchful owls, and a female figure frozen in time, Winter seems like an apt metaphor for a long and difficult year. But Winter is also an illusion: rigid aluminum and sturdy polymer resin make up much of the installation (which appears more like papier-mâché) tricking the viewer into thinking these materials could simply melt away.

But the cold has a way of holding on. Skoglund’s culminating large-scale photograph depicts the winter landscape with a family of three contained in its corner. A young girl with fiery red hair stares straight into the camera while her parents glance over their shoulders. The photograph conveys a claustrophobic surrealism that immediately dissipates in the actual presence of the installation, its artificial appeal breaking the spell. 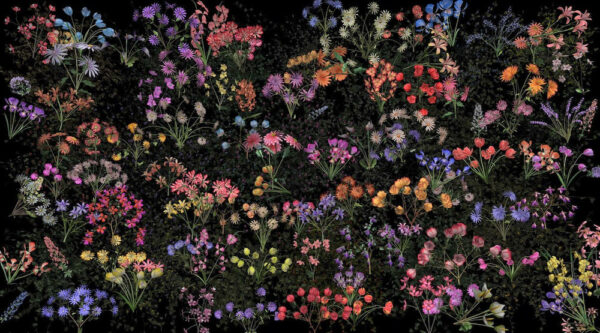 Past Winter, signs of spring: Jennifer Steinkamp’s Botanic 3 (2016) is a video animation of wildflowers blowing in the digital breeze. Kaleidoscopic and luminous, Steinkamp’s flowers break apart and blend together, as if the petals were caught in a dreamy undertow. “My work draws our attention to the atmosphere around us,” Steinkamp notes. “As plants move, they reveal the invisible currents of the air.” 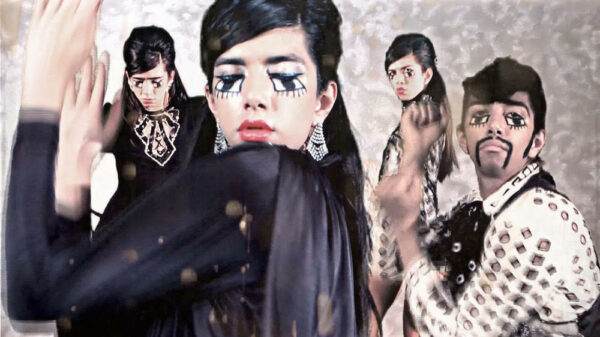 Martine Gutierrez’s Clubbing (2012) is a music video with mod couples (all played by the artist) grooving to a minimalist beat. Gutierrez, who often stars in her own creations, uses photography, music, and fashion to explore gender and identity in her work. Contradictions cancel each other out as social constructs fall away. Another film shows the artist in a ballgown and baseball cap, sleekly moving across an empty industrial lot in the late afternoon sun.

“The Martine videos were going to be more of a lounge setting, to sit and relax, but that was before Covid,” says Barilleaux, referencing the multi-screen pavilion looping Gutierrez’s films. “We had to think about how to make modifications, but not to lose the synergy of the show.” 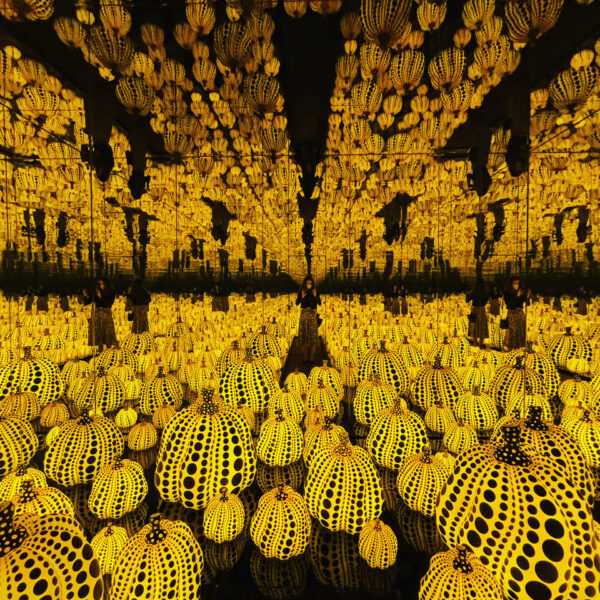 Limitless! lives up to its name with a Yayoi Kusama infinity room as the grand finale. All the Eternal Love I Have for the Pumpkins is a fully mirrored enclosure populated by the Japanese artist’s signature yellow polka-dotted pumpkins. “I love pumpkins because of their humorous form, warm feeling, and a human-like quality,” Kusama expressed in an interview in 2015. “My desire to create works of pumpkins still continues. I have enthusiasm as if I were still a child.”

Kusama, who is now 92, is said to have had a very difficult childhood. Growing up in an affluent family that owned a plant nursery and seed farm, pumpkins were an early source of joy for the artist. She popularized them in her artwork by the 1980s, long after her polka dot motif had already taken hold. “My life is a dot lost among thousands of other dots,” she once proclaimed. “Polka dots are a way to infinity.”

Reserving a ticket in advance gets you exactly 45 seconds with infinity. A polite knock on the door tells you when your time is up. “Kusama’s infinity room is all about the illusion it creates in the space; after a certain amount of time, that illusion breaks down,” says Barilleaux.

But after over a year of lockdown, time has taken on new meaning. Limitless! is a shiny reminder that nothing lasts forever. For those who feel 45 seconds is too fleeting? You can always get back into the queue — forever is faster than you think.

On view through September 19, 2021 at the McNay Art Museum in San Antonio.

Review: “Negative Women” at the Houston Museum of...