We commemorate the 4th of July holiday by sharing works by Adrian Aguilera and Betelhem Makonnen, Jenn Hassin, Xxavier Edward Carter, Jennifer Ling Datchuk, Jenelle Esparza, and Vincent Valdez, as they reflect on the U.S. flag and its meaning. 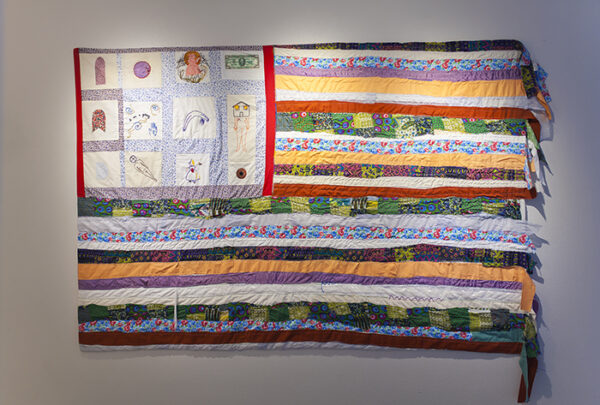 Jenelle Esparza: “When I approached this work… I immediately thought of the fragments of projects that I didn’t have a place for yet … The objects varied from embroidered textile pieces to bronze casts, but the subject at the core of it all was WOMEN and our experiences through generations. I was casting my grandmother’s clothes pins that hung on the line for decades in bronze. I was taking her unfinished quilt blocks and finishing them myself, which changed the narrative to a contemporary one. Then I decided to… make something that represented ALL women’s experiences in this country. As a citizen, I have always been concerned with women’s issues like the anti-women agenda in my lifetime and the legislation being made to work against us and our bodies.” 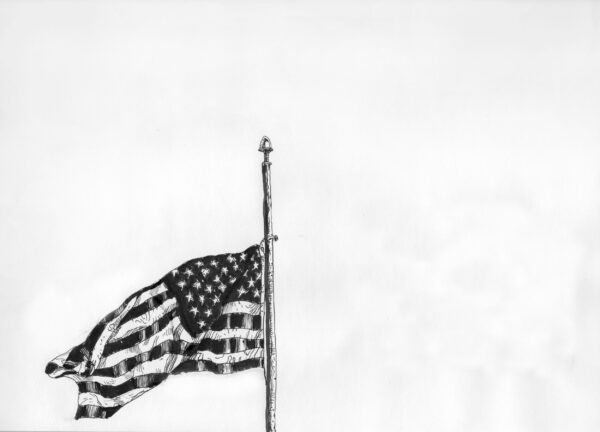 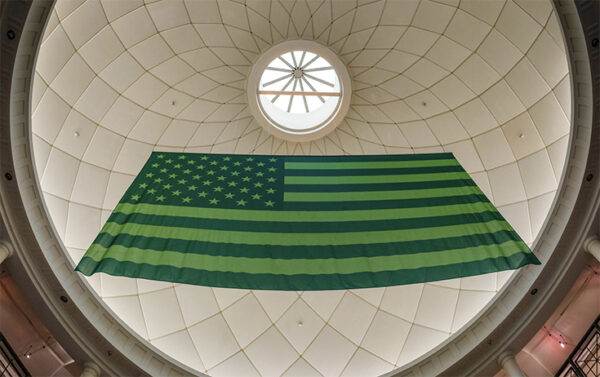 Via Philbrook Museum: “untitled (a flag for John Lewis or a green screen placeholder for an America that is yet to be) honors the late Georgia Congressman John Lewis, an icon of the civil rights movement, and all past and present liberation workers who continually fight for freedom, justice, and equal rights for all Americans.” The flag is currently on view at Philbrook Museum in Tulsa, Oklahoma as part of the exhibition The Limitations of Now, through September 5 of this year. 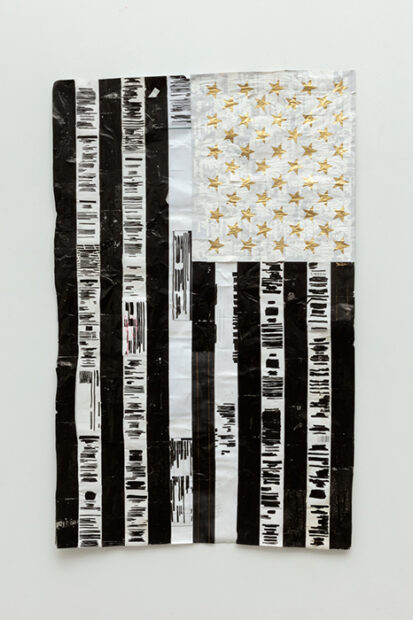 Xxavier Edward Carter, The American Exception (If There Is A Prison In It, It Is A Prison, Not A City), 2021. Acrylic, Sumi Ink, tape, watercolor on paper. Courtesy of the artist and Cluley Projects

Via Cluley Projects, Dallas: “By collaging financial documents, legal paperwork, waste paper, newspaper, and magazines, Carter carefully obscures the traces that give these documents meaning. In doing so what is left are layers of redactions, color fields, and erasures creating a pattern of recognizable but unknowable shapes. After being rendered meaningless, Carter painstakingly draws and paints onto the newly blank canvas a world of possibility.” 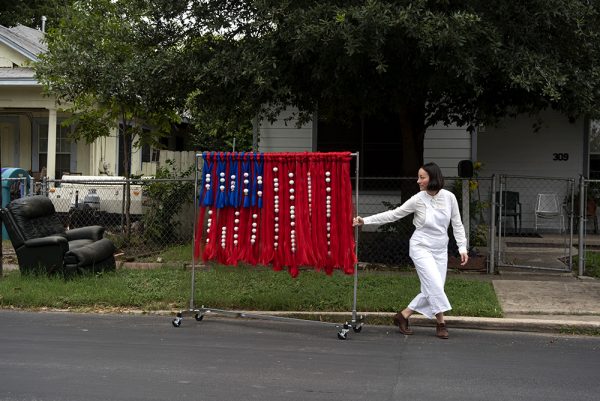 Jennifer Ling Datchuk: “My piece is titled American Flag, and is made of synthetic hair, porcelain beads, and a rolling rack. Adorned on the beads are the names of the suffragettes I did not learn about in school, the women of color who continued to fight long after white women received the right the vote… the names of Mabel Lee, Zitkála-Šáand, Ida B. Wells to name a few.”

Jenn Hassin: “For the composition, I drew from patriotism and a heavy lean to service. The star and stripes respectfully give gratitude to the many patriots that help celebrate our nation’s veterans. All other colors are military uniform hues that give tribute to those who have worn and are wearing the uniform.”