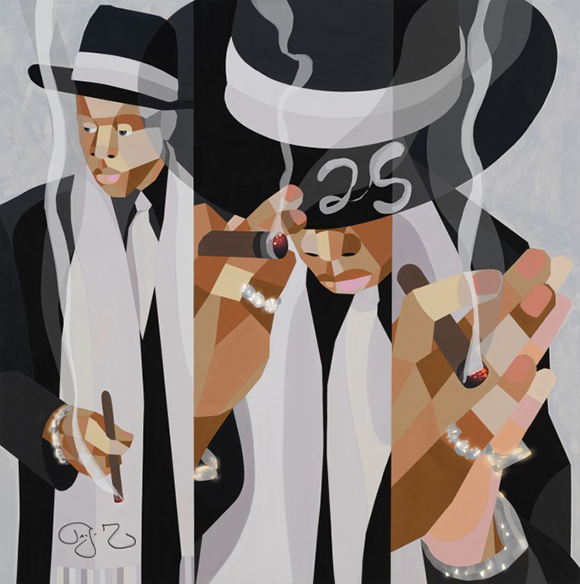 The one-of-one NFT bears the same title as the debut album’s original moniker, Heir to the Throne. For the NFT, Adams features a three-panel gif that depicts JAY-Z in profile as well as the fedora-clad rapper front and center with head bowed and the brim of his hat tipped to cover his face. Smoke emanates from lit cigars in hand gestures across the panel, with the center panel cigar smoke forming the number 25 as the bling-laden hands and wrists of Mr. Carter intermittently glow.

The gif can be seen on Adam’s Instagram page here, as well as in Sotheby’s York Avenue Galleries through July 1, as well as online via Sotheby’s. Bidding for Heir to the Throne: An NFT in Celebration of JAY-Z’s Reasonable Doubt 25th Anniversary by Derrick Adams started at $1,000 and, as of press time, is at $28,000 from 43 bidders.Sotheby’s will accept cryptocurrency (Ether and Bitcoin) through Coinbase Commerce. Some proceeds from the auction will benefit The Shawn Carter Foundation and support its mission to help “individuals facing socio-economic hardships further their education at postsecondary institutions.” 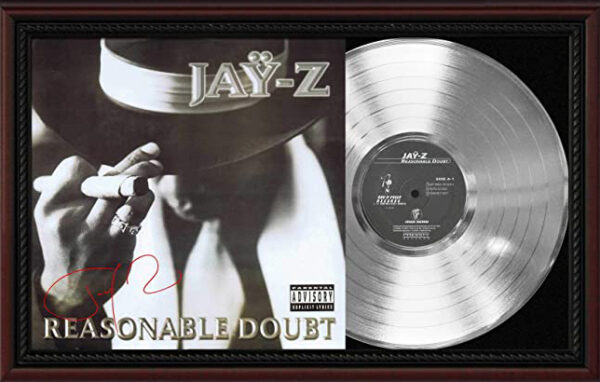 “Over the years JAY has collected and supported my work, and so this collaboration is particularly fulfilling,” Adams states. “With this NFT project, we jointly embrace the opportunity to further the conversation about how artists of different mediums contribute to a more inclusive society. JAY’s album Reasonable Doubt changed the game 25 years ago, and continues to influence so many of us. It tells the story of someone from Brooklyn occupying the urban space — a place that is as central to my own work as it is to his. My portraits aim to capture the sensibility, optimism and beauty of urban life, and in JAY’s work I’ve found tremendous kinship.”

Cassandra Hatton, Sotheby’s Global Head of Science and Popular Culture, adds: “It’s an extraordinary honor for Sotheby’s to present Heir to the Throne in celebration of the 25th anniversary of JAY-Z’s debut masterpiece, Reasonable Doubt. It’s fitting that JAY-Z’s pioneering lyrical brilliance is commemorated through the iconic vision of acclaimed artist Derrick Adams in a bold new medium. The release of Heir to the Throne marks the continued influence of Reasonable Doubt and its deep legacy of cultural importance.”

Although Heir to the Throne is not part of it, there are several tangible works of art for sale on Glasstire’s virtual auction celebrating our 20th anniversary, July 10-17. For a list of participating artists, please go here.

Make your own Digital Art with this Beeple...

Art Dirt: What are NFTs and how did...