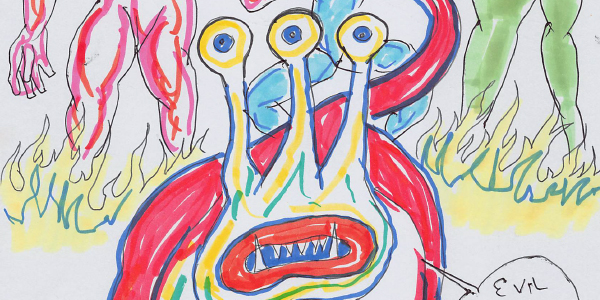 Daniel Johnston “Evil Is As Evil Was.”

“Ro2 Art is proud to present The Story of an Artist & Songs of Pain, a retrospective featuring works by artist Daniel Johnston. The exhibition will open with a casual reception at Ro2 Art in The Cedars, located at 1501 S. Ervay St, Dallas, TX and will take place from 12-5 PM.

“Daniel Johnston (1961-2019) was a self taught visionary artist and musician who used his art to plumb the depths of his longing. This collection of drawings and collages, spanning 1978-2019 explore the artist’s personal mythologies as he yearned for acceptance, while trying to separate fantasy from reality.

“In work from the ’70s and ’80s are the first appearances of characters that remained in his art for the rest of his life: eyeballs of various forms, a female torso, super heroes, ducks, polka dot shorts, cubes, open skulls, and satan. During this time, Johnston used found paper, usually retrieved from trash cans, typing paper or notebook pages as surfaces. Sometimes there is bleed-through of images from the other side. This feature of the brittle material serves as a poignant metaphor for themes found within it, meditations on death, love, emotional pain, fame, mental illness, and potential damnation. His earliest collage is from this era.” 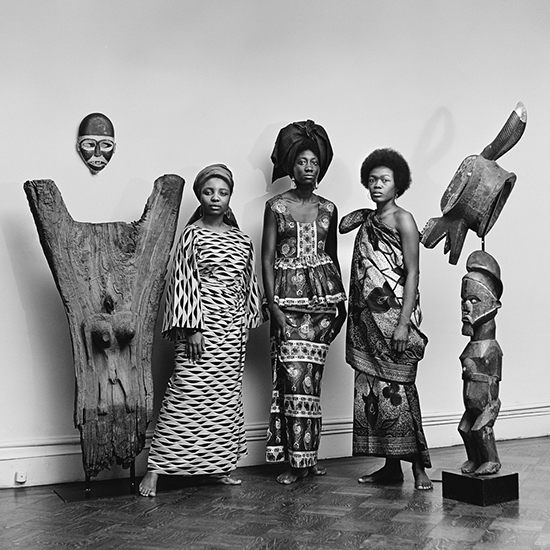 “In the late 1950s and throughout the 1960s, Kwame Brathwaite (born Brooklyn, New York, 1938) used photography to popularize the political slogan “Black Is Beautiful.” This exhibition—the first ever dedicated to Brathwaite’s remarkable career—tells the story of a key figure of the second Harlem Renaissance. Inspired by the writings of activist and Black nationalist Marcus Garvey, Brathwaite, along with his older brother, Elombe Brath, founded the African Jazz Arts Society and Studios (AJASS) and the Grandassa Models. AJASS was a collective of artists, playwrights, designers, and dancers. Grandassa Models—the subject of much of this show’s contents—was a modeling agency for Black women, founded to challenge white beauty standards. From stunning studio portraits to behind-the-scenes images of Harlem’s artistic community, including Max Roach and Abbey Lincoln, this show offers a long-overdue exploration of Brathwaite’s life and work.” 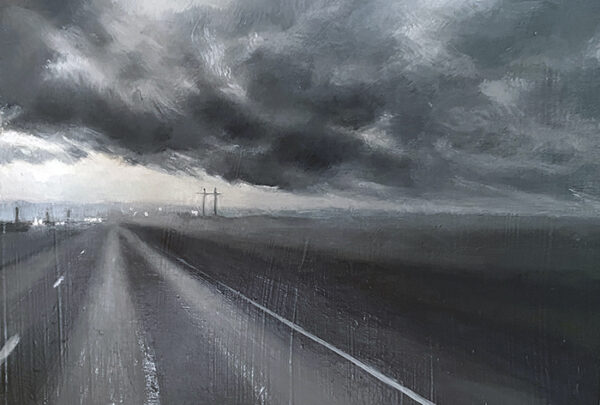 It’s Only for a Moment is an exhibition of small paintings by Elena Rodz.

“It’s Only for a Moment is an exhibition of small paintings by Elena Rodz. Originally from North Texas, Elena Rodriguez studied Fine Arts at Washington University in St. Louis, where she focused on traditional painting and film studies. After earning her BFA, she moved to New York City, where she worked in the post production film industry until she went to grad school at the New York Academy of Art. She moved to South Texas in 2013 to take a job at the Rockport Center for the Arts, and in 2018 she became the curator of exhibitions. She lives in Corpus Christi with her fiancé and pets, and she maintains an active studio practice out of K Space Art Studios.”

“I make dumb landscape paintings. They are ‘dumb’ in that they explicitly require the viewer to suspend higher thought and instead experience the feeling that comes from viewing the art. There is no deeper meaning; nothing is a metaphor or allegory. It’s a painting of a landscape with a moody atmosphere.” 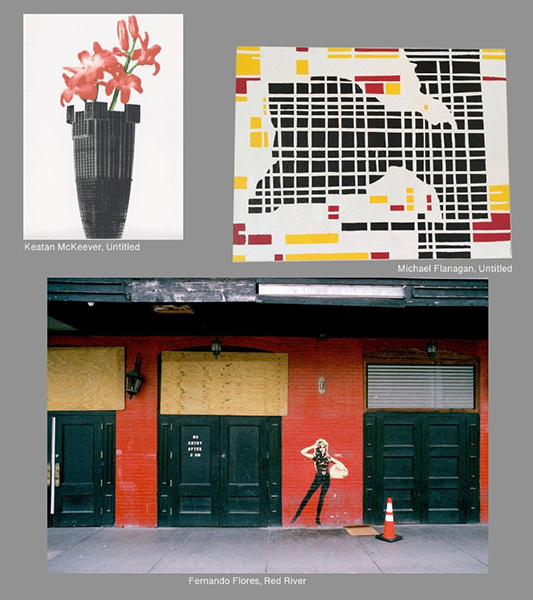 “For our first show of the summer of 2021, we handed over the curatorial keys to friend and former resident of the Rert compound, Michael Flanagan. He provides this introduction for what inspired the show:

“The word Texas is derived from the Native American Caddo term tayshas. The expression was used by the Caddo to describe ‘friends,’ and was first heard by Spanish explorers during early encounters with the native tribes in the 1600’s. Keatan McKeever, Fernando Flores, and Michael Flanagan all have roots in the Rio Grande Valley, a region that comprises areas of South Texas in the United States and Northern Tamaulipas in Mexico. Each artist draws on their unique experiences in the area to create work that explores themes of identity, material, and environment.” 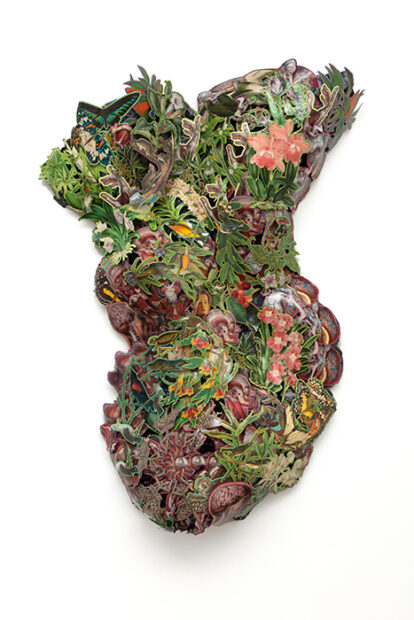 “The second biennial MFAH Staff Art Show celebrates an important art resource: the Museum’s talented employees. In addition to jobs such as educators, adminstrators, and art handlers, a surprising number of MFAH staff members create their own art. This exhibition features work in an array of media and styles by more than 70 artists. On view in the Beck Building from June 13 to June 27, the MFAH Staff Art Show is included with general admission.”

The Top Five Things to See in Houston