Cleaving the Void in Jeanne Neal’s “Re-Articulation” at Ro2, Dallas 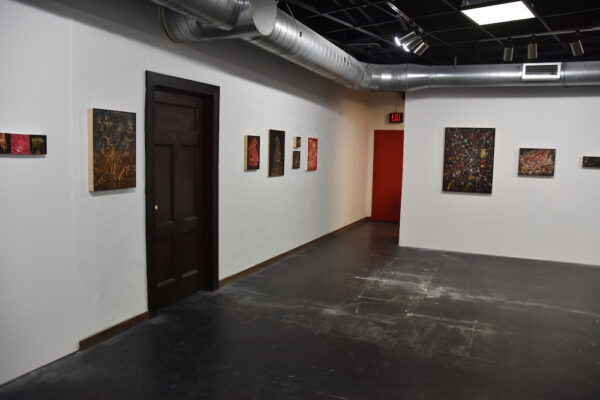 I visited Ro2 Art’s downtown Dallas location right at the beginning of reception of Jeanne Neal’s solo show, Re-Articulation. I have seen all of Neal’s solo exhibitions with Ro2; her shows fluctuate between darkness and playful, and Re-Articulation is on the darker end of her spectrum. No matter what kind of mood her works evoke, they are always intuitive. Her mark-making looks like cuts on the surface created by a sharp object, and the precision of these marks anchors the works. Some works appear explosive while others are delicate — the interplay between sharpness and softness is prominent in this show, which tells the story of recovering from pandemic anxiety. These are images of damaged floral blooms, burning houses, melting glaciers, and strange microorganisms. 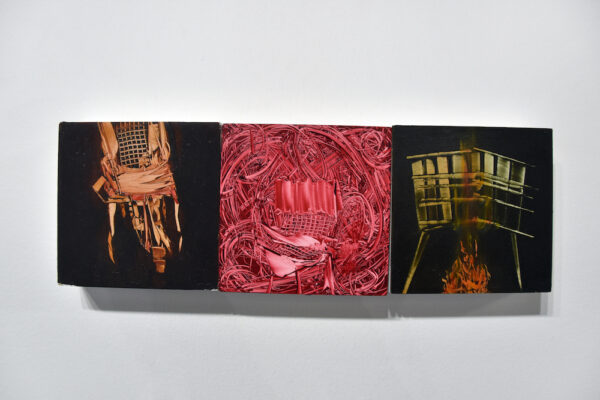 The small 5×5-inch oil-on-panel work An Interesting Place to Sit is my absolute favorite. It’s part of a triptych that depicts domestic objects and spaces rocked by ongoing events, and it’s rendered in beautiful magenta hues. The title of the piece evokes a chair placed within a swirling tempest. Forceful winds circulate around the chair. The sitter is not present, so we can project ourselves into the picture. We wait, on this chair, and see the world crumble before of our eyes.

Countless currents swept through our lives this past year, revealing so much hurt and despair. The two other works in the triptych, to the left and right of An Interesting Place to Sit, further elaborate our shared states of turbulence. One is an image of a house set ablaze, and the another is an image of a chair that’s left behind. Neal renders these symbols of rest and protection as being discarded and destroyed. After being trapped for so long, don’t we all want to get up and leave? 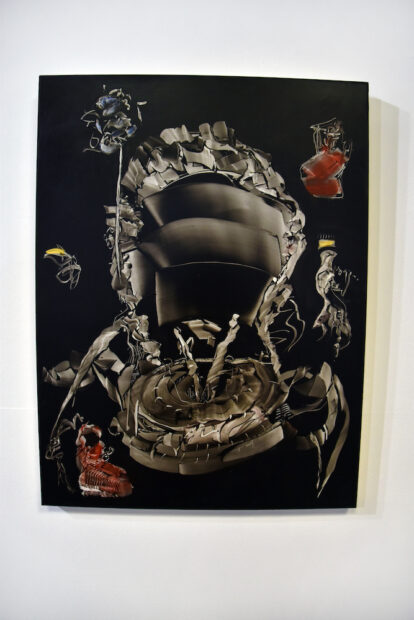 I gravitate toward a piece that looks like a virus. Metallic Monarchy appears to be a bacteriophage — a virus that infects bacteria. I blame my microbiology undergrad classes and the ongoing pandemic for seeing the piece as just that. The work is sharp, relentless, and diabolical. Neal cuts through the darkness to bring the situation to light; her gray tones make the phage more machine-like as it drills its DNA into an unsuspecting victim. Its host releases fragments rendered in reds, blues, and yellows. Maybe this phage isn’t designed to kill bacteria, but instead to destroy machines? Technology — the internet — has pseudo-satisfied our longing for touch by providing a safe intermediary between two bodies. It has also trapped us. Strong biological and man-made forces make it difficult for us to truly connect. 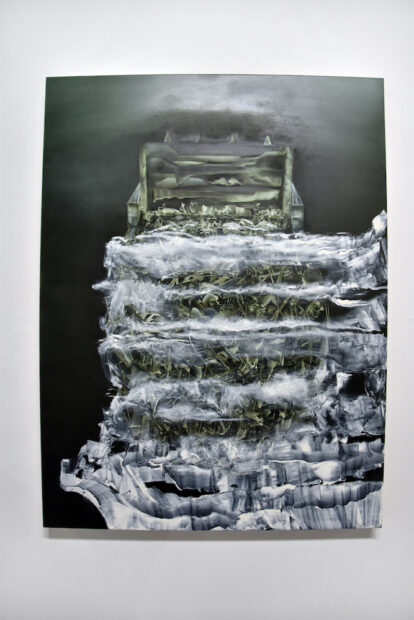 I turn toward Frankenstein in Antarctica 2, Neal’s greenish-gray tower with a spiky roof encased in ice. The painting conjures Victor Frankenstein’s desperation to chase and destroy his monster. His fiery passion evaporates in the cold; Frankenstein follows his creature all the way to the frozen edges of the world, but his body ultimately fails him. Over the last 18 months, we’ve all had this little Frankenstein within us — the monstrous effects of the pandemic and social reckoning has engulfed us in a chill. In Neal’s painting, convoluted emotions, thoughts, and events freeze us, but emergent strength is rendered as spikes piercing through ice. We want our lives back, but we’re breaking from the past. The frozen landscape will eventually melt, to reveal a world we’ve not seen before.