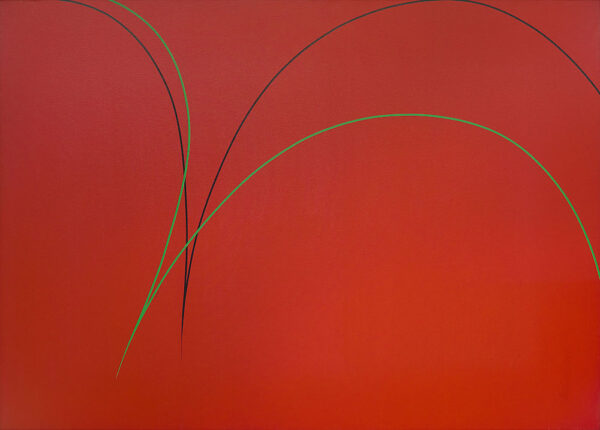 Virginia Jaramillo’s exhibition at the Menil Collection in Houston, The Curvilinear Paintings, 1969–1974, is comprised of angles and views. The first solo museum presentation of her career, the show is striking and straightforward, made up of eight acrylic paintings created soon after Jaramillo made the move from Paris to New York City in 1967.

The exhibition, which is organized by Menil curator Michelle White, exemplifies the Menil aesthetic; the museum is at its best when presenting small, thoughtfully curated and installed exhibitions in its jewelbox galleries. Oftentimes these projects — Trenton Doyle Hancock’s 2019 installation; a 2018 show about Claes Oldenburg’s mice; a 2013 collection of letters and drawings from the museum’s archives — have the dual feel of a tight gallery exhibition and a deep dive into the ethos of what makes this museum (and the artists) tick.

On first glance, Jaramillo’s paintings don’t give much away; they’re tightly painted, mostly matte, and remarkably flat. With a closer look, they open up. Ribbons of color creep, fly, and explode across the paintings’ monochromatic grounds. The unusual hues of their backgrounds — deep blue-black, Kelly green, oxblood — make the contrasting ribbons pop. 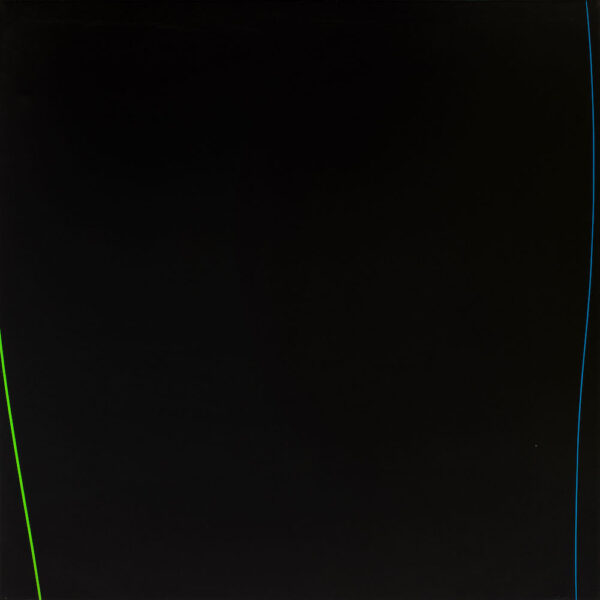 Jaramillo’s lines are the hyperactive cousins of Barnett Newman’s zips (which are on view in a gallery at the other end of the museum). They also have more body. While Newman’s paintings have a certain two-dimensional flatness, Jaramillo creates a remarkable sense of space by making her ribbons crisscross and wiggle over her canvases.

A reductionist way to look at Jaramillo’s work is to dismiss it because at heart it’s hard-edge tape painting — but this is hard-edge tape painting done right. Unlike the boxy lines of Mondrian (two of his works are also on view in the museum’s other galleries), Jaramillo’s elegant ribbons wrap all the way around the side of her thick canvases, turning them into presents. Here are some of the works’ best details: these small moments where her lines make unnatural turns around a stretcher bar and wrap the canvas whole.

Because seeing the colored lines’ wraparound is such a crucial part of understanding Jaramillo’s concept and technique, the best in-person viewing of this exhibition isn’t what you’d expect from a painting show. Rather than looking at the works straight on, or contemplating them from the bench in the center of the room, Jaramillo’s paintings are best viewed from the rectangular gallery’s four corners. White’s installation of the show is spot-on in this respect, as the three works on the gallery’s back wall are the ones with the boldest linework. A walk to each corner of the gallery affects the way light falls on Jaramillo’s surfaces, and changes which edges of the canvases you see. 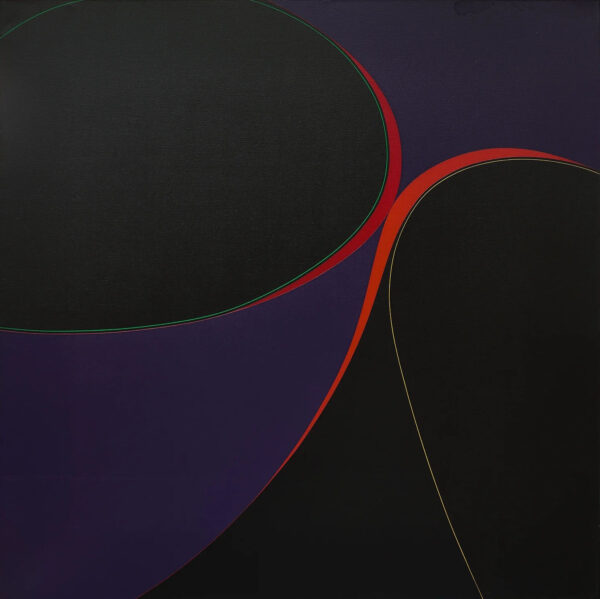 The earliest piece in the show, Genesis, from 1969, is a more visually complex version of the exhibition’s other works. Though it also has ribbon wraps (which are much thinner than those on the other paintings), the thrust of this work is its shapeliness. Elements of the work nod to Jaramillo’s New York contemporaries — Frank Stella’s and Ellsworth Kelly’s rounded forms that barley touch each other come to mind. But Jaramillo’s painting is more active, and lends itself more to anthropomorphism than hard-edge minimalism. 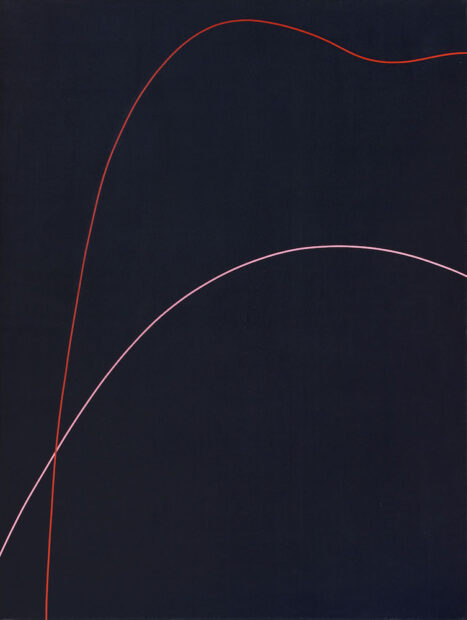 Though wonderful, this exhibition isn’t a crowd-pleaser in the conventional sense — or, rather, a small, eight-work show of paintings made between 1969 and 1974 isn’t necessarily going to pack people into the museum. Instead, this solo exhibition is deserved recognition: Jaramillo was the only woman and Latina included in the storied 1971 exhibition The De Luxe Show, which was, per the Menil, “one of the first racially integrated exhibitions of contemporary art held in the United States.” Since then, though she’s continued making work and is in numerous museum collections (Texas is lucky to lay claim to two works in this show: the pink and red-striped Untitled (1971), which is owned by The Rachofsky Collection in Dallas, and the orange and blue-striped Untitled (1971), which is in the collection of the Menil), she’s up to now never had a solo show at a major museum. 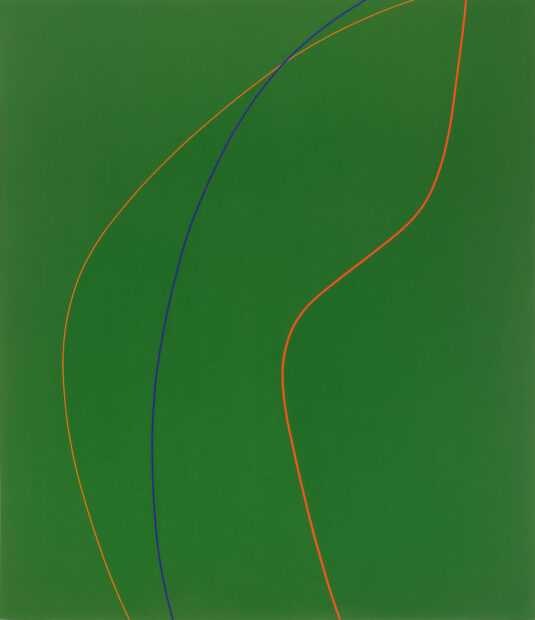 It can be hard to judge an artist’s career or legacy by only a handful of works from the same few years, seen together. This is even more true when considering an artist like Jaramillo, whose works come alive only when viewed in-person and from multiple angles. But there are no scales in my eyes when it comes to Jaramillo’s fierce talent. I first saw her work at Hales Gallery’s booth at the Dallas Art Fair in 2019, and then again in Soul of a Nation: Art in the Age of Black Power, a touring show on view at the MFAH in the summer of 2020. Both of those earlier encounters left an impression on me.

Jaramillo’s piece in Soul of a Nation, a 1971 painting from the collection of the Brooklyn Museum, made me stop in my tracks. Installed in the corner of a room of the MFAH’s now-American art galleries, the piece felt like it took up the entire wall — a green and teal ground that changed with the light, held together with three curving ribbons. In a large group exhibition that exuded heart, life, and spirit, Jaramillo’s quiet abstraction joined the chorus to great effect. 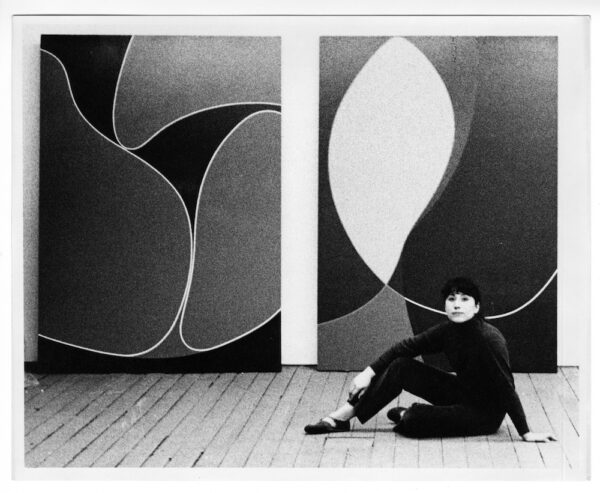 Over the last year, which many of us have spent mostly at home and viewing art online, it’s shows like Jaramillo’s that we’ve missed. Exhibitions where you can stand in the middle (or corner) of a gallery, open your eyes, and take in another’s vision of the world.

Through July 3 at the Menil Collection, Houston.