Too Much of a Good Thing: “30 Americans” at Arlington Museum of Art 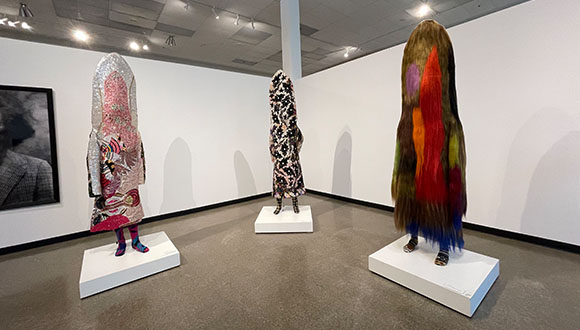 Nick Cave’s Soundsuits at the entrance of 30 Americans at Arlington Museum of Art.

The risk of mounting an exhibition with the works of dozens of the most notable Black artists in history is that it becomes an overwhelming visual experience at the expense of individual works of art — works that really should be given more space in order for an audience to take in their intricacies and heft. Where this type of show succeeds it can be an impactful introduction to the works of the particular artists, but where it fails is in the unnecessary gamble it takes by suggesting a sameness to works of incredible diversity and distinction in a space too small to contain them.

The show I’m referring to, 30 Americans, at the Arlington Museum of Art, is from Miami’s Rubell Museum‘s permanent collection and is traveling. It was last seen in Texas at the McNay Art Museum in San Antonio back in February of 2018. The exhibition has been seen across the country since 2008, when it was organized. This fall, it travels to the Columbia Museum of Art in South Carolina.

30 Americans features the works of Nina Chanel Abney, Mark Bradford, Glenn Ligon, Barkley L. Hendricks, Nick Cave, Carrie Mae Weems, and others — 31 in all, despite what the title suggests. (For the complete list of artists, please go here.) 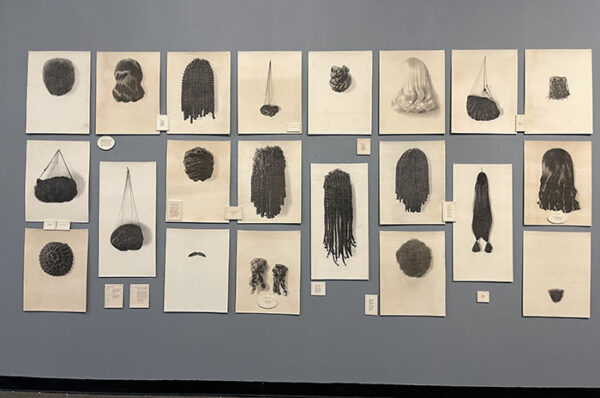 I did find moments to pause amongst the tightly installed works, and could be richly rewarded; the 31 artists in the show have rightfully earned their place in the pantheon of important artists since 1945. On such work is Lorna Simpson’s Wigs (Portfolio) from 1994. The thick, fibrous felt lithographs in a salon-styled arrangement were both physically and contextually weighted. Simpson’s entomological treatment of the works on paper, held to the wall from thin metal pins not unlike the labeled specimens of a butterfly collection, encourage serious scrutiny of both subject and object. The politics of Black hair, infused with the power of the 1960s and ’70s Black liberation and Black Power movements, and the recent initiative to pass the non-discriminatiory “Crown Act,” are all interwoven into Simpson’s Wigs. 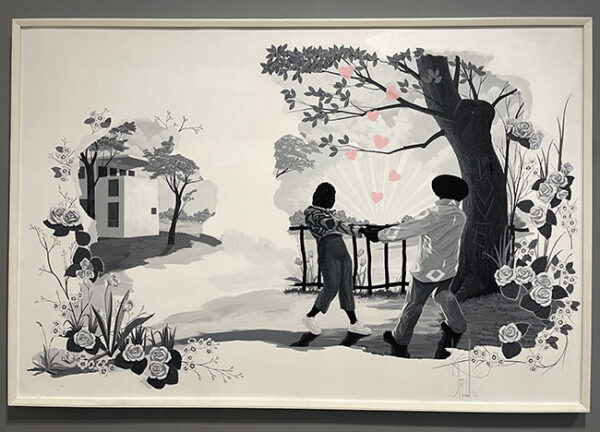 Another work in the exhibition recalls the Dick and Jane reading textbooks that were part of my elementary school education. Kerry James Marshall’s Vignette #10, from 2007, presents vignette-styled illustrations originating in mid-century advertisement and other graphic art of the time. I couldn’t help thinking about how insidious and prevalent this kind of imagery was at the time, and how much it normalized white supremacy. Especially at the expense of the rich culture and heritage that it supplanted in childhood education across the world. Marshall co-opts that style and re-programs it to normalize Black love and reassert Black presence as a historical fact in art and print where that portrayal has been historically diminished. 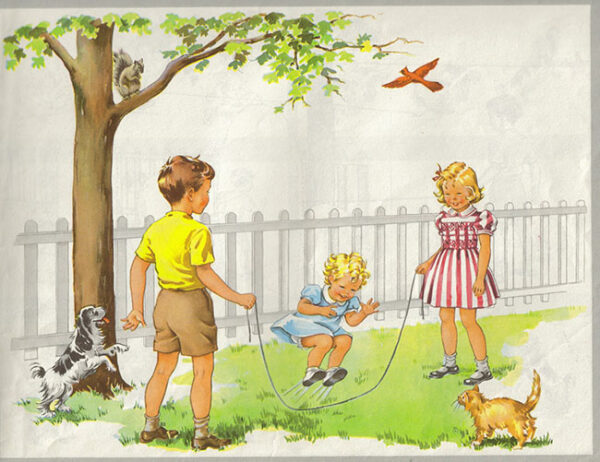 Dick and Jane, characters from a series of childhood reading books first published in the 1950s.

The premise of 30 Americans is that these works are provocative and controversial. I disagree with that assertion, and think that what is controversial is the absence of the politics these works address from any serious dialogue or educational imperative in our national conversation. Even as we commemorate the 100-year anniversary of the Tulsa Massacre this week, some Americans, particularly young people, may be learning about it for the first time. 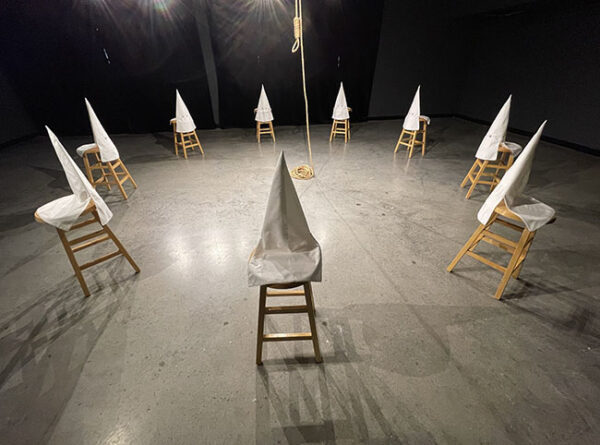 The way some works in 30 Americans are exhibited is itself a controversial proposition. Should the history of lynching in America, as confronted by Gary Simmons’ Duck Duck Noose, from 1992, be handled as a topic requiring a parental advisory warning? It shouldn’t. It would better serve visitors to engage with the reality that the work portrays by installing it on the ground floor where a work by Kara Walker, Camptown Ladies, bookends the terror of slavery and Jim Crow, and not on the third floor where it could easily be missed, or worse, fetishized as appropriate only for a mature audience. According to the documentary Lynching In America: Confronting the Legacy of Racial Terror, “More than 4,000 African Americans were lynched across twenty states between 1877 and 1950.” The more we learn about these acts of terrorism, the more we can learn from them, and the better we are as a society. This is not controversial nor provocative. This is history.

But this is also precisely where these otherwise powerful examples of how art can be a mirror to society are diminished by the excess number of works and artists in the relatively small confines of the Arlington Museum of Art. 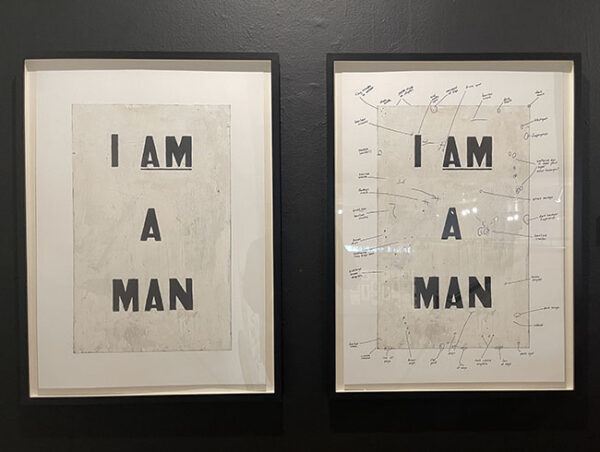 A work I was happy to see, though, was Glenn Ligon’s Condition Report D, from 2000. Charged with the power of language, and a reminder of how conceptual works have the ability to bring us to tears, this work of Ligon’s presents a standard art condition report — a common insurance practice of copying a work of art to mark its condition at arrival to a museum — to great and poetic effect. It accurately conveys existing wear and tear on an iconic civil rights placard, but what this kind of forensic autopsy further illustrates are the smudges, scrapes, cracks and loss of edge to the man-ness of Black people. It’s a twist that maybe only Ligon is capable of. 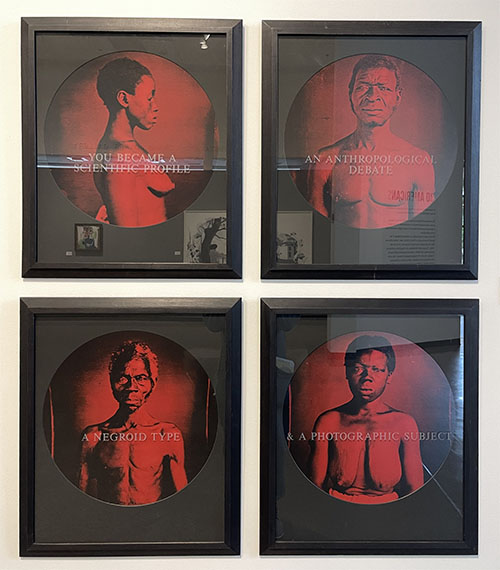 Carrie Mae Weems, “You Became a Scientific Profile/ An Anthropological Debate/ A Negroid Type/ & A Photographic Subject (from From Here I Saw What Happened and I Cried series),” 1995-1996. Four monochromatic c-prints with sand-blasted text on glass in artist frames, Ed. 2/10.

It’s frustrating to point to the eloquence of works in the show by Wangechi Mutu (her Evolution of Mud Mama from Beginning to Start, 2008), the profound monumentality of Rodney McMillian’s Untitled, 2005 Carpet, or any of the dozens of digital C-prints by Hank Willis Thomas from the mid-2000s without also wanting to experience these works in completely separate, focused exhibitions. Mentioning Barkley L. Hendricks and Nina Chanel Abney as also-rans in any show also seems sacrilegious. Not to mention Nick Cave’s Soundsuits and the deeply moving works by Carrie Mae Weems. 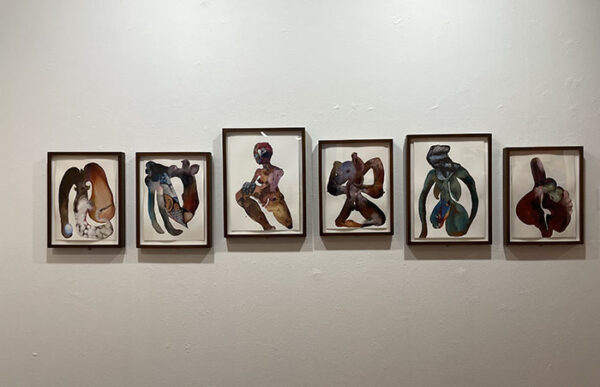 Wangechi Mutu “The Evolution of Mud Mama from Beginning to Start,” 2008. Six collages, watercolor, gold leaf and collage on paper. 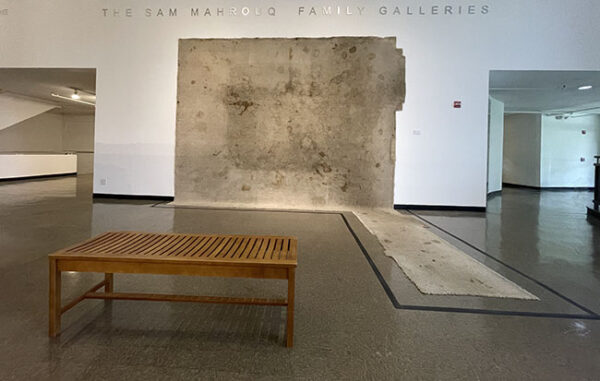 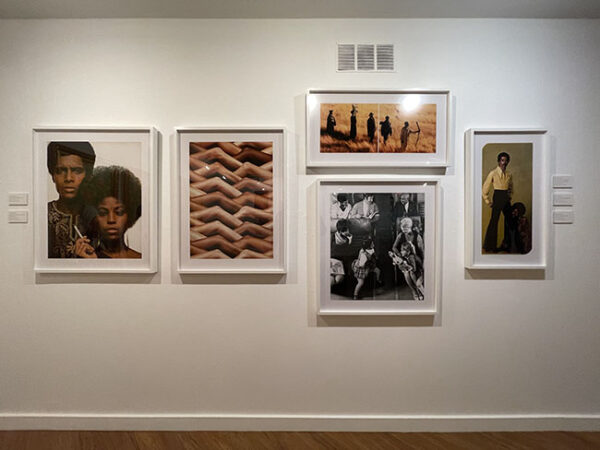 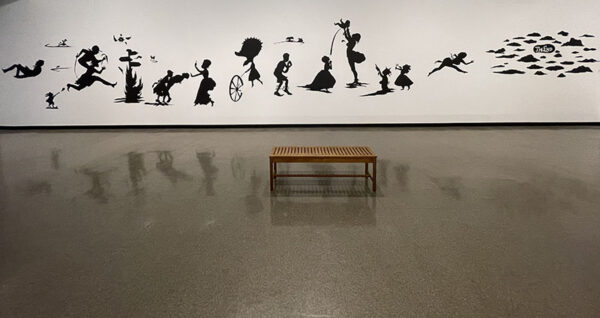 As tempting as hosting a blockbuster traveling exhibition can be, and given the opportunity to pick works from the dozens available for 30 Americans, an exercise of curatorial restraint on the part of Arlington Museum of Art could have benefited the show.

On view at the Arlington Museum of Art through September 5.

Inter(re)view with Sally Frater, curator of “There is...

Thanks Christopher Blay for a super writeup on this show!

Christopher even in a larger space, this particular show is unwieldy for all the reasons you state. I also have a bit of a problem with having an exhibition that purports to represent the most controversial art addressing the African American experience with injustice when in fact this exhibition simply represents a collector’s perspective on this issue. It’s the problem I have with museums touring shows that are from private collections/museums as if they’ve don’t need as careful curation as any show originated at the museum by staff.

While I have not seen the exhibition yet, I would expect the Arlington Museum could not have vastly limited the number of pieces and still hosted it. The line up of top tier artists is impressive and if slightly crowded so be it, better than not having the exhibition.