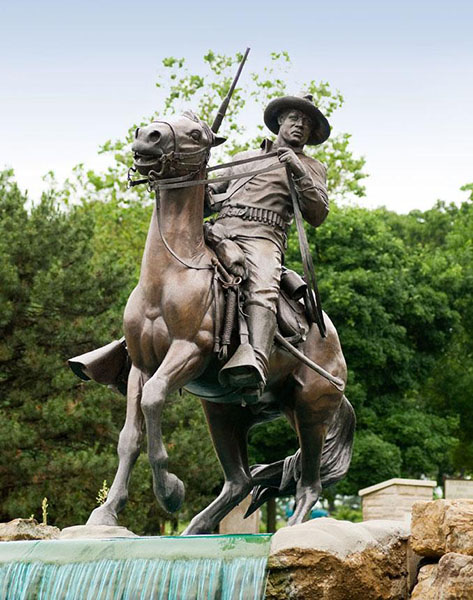 Dixon states that he is creating “unsung heroes” — in this case, the unit of Black soldiers who taught horsemanship to white army officers.

“The West Point sculpture is the culmination of a project that was started by Sanders Matthews before he died at age 95 in 2016. When his 23 years of service, most of it at West Point, ended in 1962, he became the first African American police officer in nearby Highland Falls, N.Y. He then returned to West Point as a campus bus driver, according to the Buffalo Soldiers Association, an organization he founded in 2008.”

The 10-feet tall piece depicts Matthews atop a horse with a Calvary flag, and will be cast in bronze and displayed at West Point in September of this year, on West Point’s Buffalo Soldier’s Field. Dixon, who served two tours in Vietnam and has created many Buffalo Soldier monuments over the years, says of the project: “Naturally, you would feel an empathy toward soldiers, for the simple fact that I was one.” 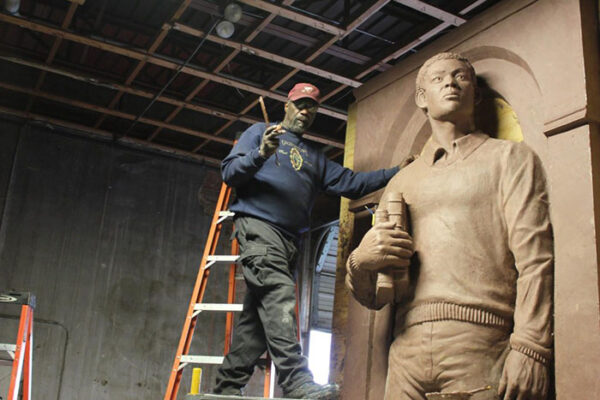 Eddie Dixon in his studio.

In Lubbock, Dixon is known for his statue commemorating Tim Cole, who was wrongly convicted for a 1985 rape, and who died in prison at age 39 after 14 years of incarceration. Cole was the first person to be posthumously exonerated by DNA testing in Texas, and was pardoned in 2010 when Governor Rick Perry signed the pardon, almost a year after an Austin court declared him not guilty. The public park at the site of the memorial is on the corner of 19th and University, and often serves as the site of public protests in Lubbock.

More about the artist Eddie Dixon:

In 1992, President George H. W. Bush declared July 25th “National Buffalo Soldier Day” in honor of Dixon’s Buffalo Soldier Monument. In further recognition, a United States postage stamp was later designed and issued in the likeness of the Buffalo Soldier Monument. October 16, 1993, “Eddie Dixon Day” was declared in Washington D.C. and New York City and on March 28, 1994 in Lubbock, Texas. Dixon has been featured on the Arts and Entertainment Channel, The Discovery Channel, Texas Country Reporter, Good Morning America, CNN, CBS News, USA Today, the Washington Post, New York Times, Dallas Morning News, Emerge, and on the cover of International Business and Jet Magazines. In the Fall of 2003, Eddie’s art contributions to the Buffalo Soldiers were added to middle school history textbooks such as Celebrating Texas and African American First and many other history textbooks were made available for classroom use throughout the U.S. Dixon’s work can be found at the Pentagon, West Point, US Department of Interiors, US State Department; the Smithsonian Air and Space, the Smithsonian National History museums, and in many museums and war memorial and National parks throughout the United States and in more than 50 countries abroad.