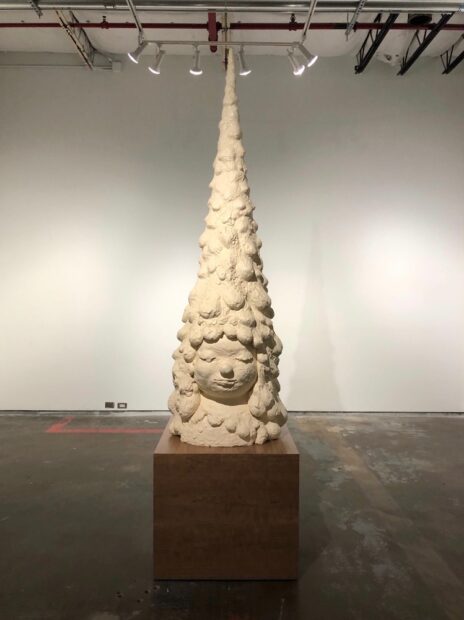 Yoshitomo Nara, the well-known Japanese artist whose work is on view at Dallas Contemporary, has a long history of depicting mildly punkish children. He habitually paints innocent cuteness set against a furrowed brow, or an irritated grimace. This formula of emotional friction is found in fast paintings on cardboard, thinly washed acrylics on wood, or sometimes delicately layered portraits on canvas. Essentially, the kid portraits are a cipher for the thoughts, feelings, and emotions of the artist.

While the repetition of these mostly crabby-sweet youngsters can feel monotonous, Nara’s sculptures of heads are peculiar and distinctive. The emotion projected outwardly by these works are more subtle and obscure than the bulk of the paintings, which are quickly understood.

To my eyes, the standout work of the exhibition is the urethane covered bronze sculpture entitled Miss Forest/Creamy Snow, 2016.  This milky white portrait feels like it takes the best of Nara’s kid-focused art and grafts it to something more enigmatic. The bulbous white bust looks like a giant ice cream cone plopped on the crown of the head, dripping downward with the pull of gravity. The droopy snow shapes are viscerally marked with finger swipes running across the rounded forms.  A ball-like nose pushes the portrait further into fantasy, as downcast eyes focus the character’s attention inward as if in meditation.

One can read the cone shaped head in various ways. Given our fraught American history and the dire state of the current moment, the hateful white hat worn by the Ku Klux Klan comes to mind. Yet, I think this is merely an accidental and unwanted association. Instead, the pointed form seems like an exaggerated reference to the somewhat similar shape of the Shinto hat called an eboshi. Perhaps Shinto philosophy, which integrates the natural and human domains, was on Nara’s mind. In this light, Miss Forest/Creamy Snow is a mixture made up of a cypress or fir tree and a classical portrait bust. The pearl-colored snow shaping the overall form is both set on top of the head and of the portrait Nara crafts. This allows the character to become a unified presence made through a material bond with the seasons and the forest. One thinks of the Japanese practice of shinrin-yoku, or “forest bathing,” which involves experiencing nature in a spiritual practice of renewal.

Nara’s iconic sculpture points toward the opening of one’s senses to the landscape as a way of feeding one’s physical and interior vitality. While this sculpture still retains the ubiquitous cuteness of Nara’s art, the fantastical portrait feels more substantive — as if something added is at stake.

On view at Dallas Contemporary through Aug. 22.