A Craze for Landscape: “Perpetual Bloom” at Rienzi, Houston

by Lauren Moya Ford May 28, 2021
FacebookTwitterEmail 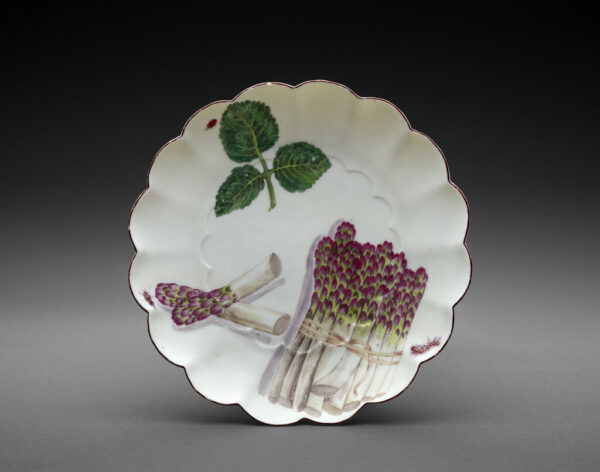 Most people know that essential ingredients of European cuisines like tomatoes, potatoes, vanilla, and chocolate aren’t native to the Old World. But many of the plants that populate the continent’s parks and gardens — tulips, hydrangeas, peonies, camelias, sunflowers, and dahlias, to name a few — come from outside, too. During the 18th century, ‘new’ plants were introduced to Europe as a byproduct of the wars, colonial conquests, and scientific expeditions that European nations staged all over the world. Despite their faraway origins and high costs, exotic plants like these became coveted collectibles that wealthy Europeans strove not only to grow and eat, but also to make a part of their daily aesthetic experiences and domestic decor.

“During the 18th century, people craved a better understanding of the natural world and that manifested in various ways, from kitchen gardens to the founding of botanical societies,” writes Museum of Fine Arts Assistant Curator and exhibition organizer Misty Flores in a recent email. “Scientific discoveries and the new print culture helped fuel botanical study and the close observation of nature. These new discoveries ignited a craze for landscape gardens both in and out of doors.”

Flores’s exhibition Perpetual Bloom: Botanicals in the 18th Century Interior at the Rienzi in Houston (located in the River Oaks neighborhood, Rienzi is the Museum of Fine Arts, Houston’s house museum for European decorative arts) explores the ways that this new fascination with plants influenced trends in European decorative arts, dining and entertaining practices, interior design, and gardening. As non-native plant species poured into the continent from the Americas, South Africa, and Asia, European elites commemorated their enthusiasm in sumptuous, botanically-themed dishes, figurines, paintings, and other decorative objects. The pieces on display in Perpetual Bloom illuminate Europeans’ elaborate, often amusing responses to these botanicals, and their desire to possess and preserve plants across time and space. ‘ 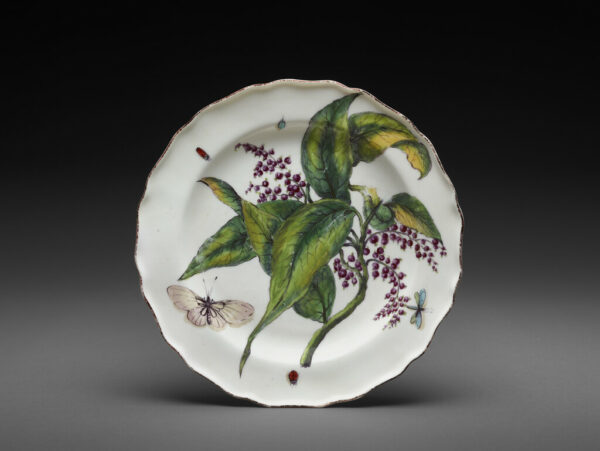 Among the new varieties of plants that came to England in the 1700s was the Virginia Pokeweed (Phytolacca americana). A Chelsea Porcelain Works plate from the mid-1700s depicts the plant as in a scientific illustration, painted in full color and in great detail. To enhance its naturalistic effect, the pokeweed’s free-flowing leaves and berries are accompanied by a handful of carefully rendered insects, which animate the image as they seem to crawl across the plate. It’s unclear if diners knew that, at the time of the plate’s creation, the pokeweed was an important food source to indigenous Americans and early settlers of the United States. But it’s certainly a sign of the era’s obsession with nature that a patron would spend lavishly on a plate like this one in order to eat atop an American weed and some bugs. 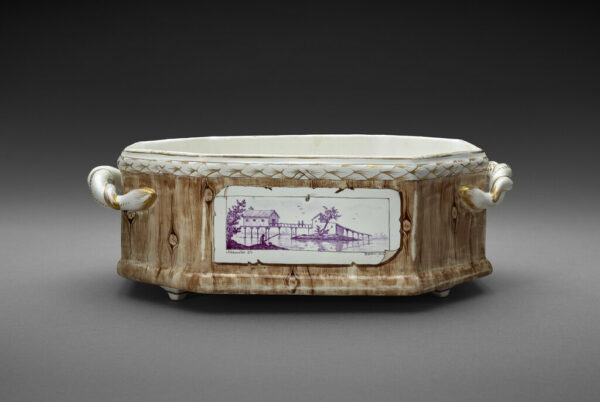 More optical tricks appear in a Niderville Porcelain Factory jardiniere from 1774. Despite its elegantly modeled handles and gold accents, the piece’s trompe l’oeil finish gives it the appearance of a simple wood planter with a peeling paper label on its exterior. The container would have been ideal for growing bulbs like Amaryllis — which originates in South Africa — Hippeastrums from Central and South America, or another expensive imported plant. Once again, the wealthy patron who commissioned this piece exhibits a curious sense of taste that seems to seek a sort of ostentation that would make the jardiniere seem natural somehow, or more down to earth. 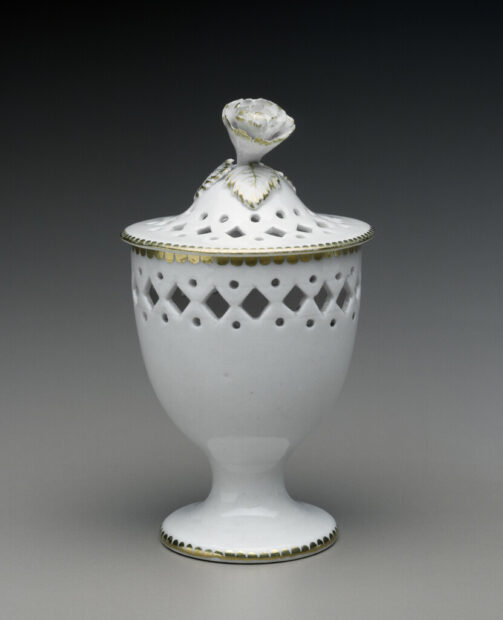 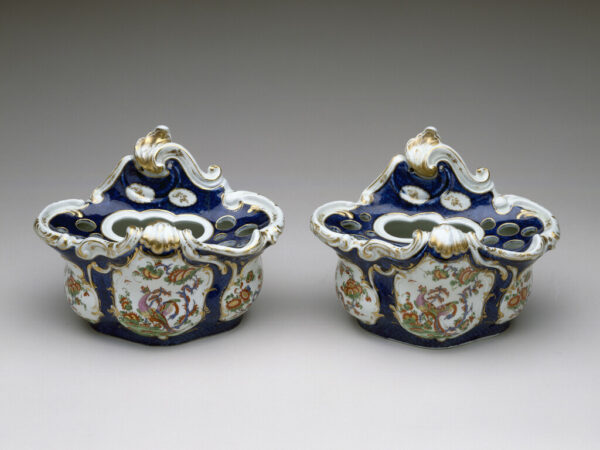 Plants’ presence wasn’t just visual in 18th-century European elite spaces; it was aromatic, too. A pair of porcelain potpourris are reminders of the multisensory experience with the natural world that the nobility and gentry hoped to create inside their homes. A graceful, urn-like vessel edged in gold from the Worcester Porcelain Manufactory features a diamond-shaped lattice of holes, where the scent of dried flowers, herbs, and cloves could waft out and perfume the room. Alternatively, a pair of bough pots from the same maker — perfect for display on a table, mantlepiece, or interior window ledge — offered the opportunity to enjoy the fragrance of freshly-cut flowers instead. 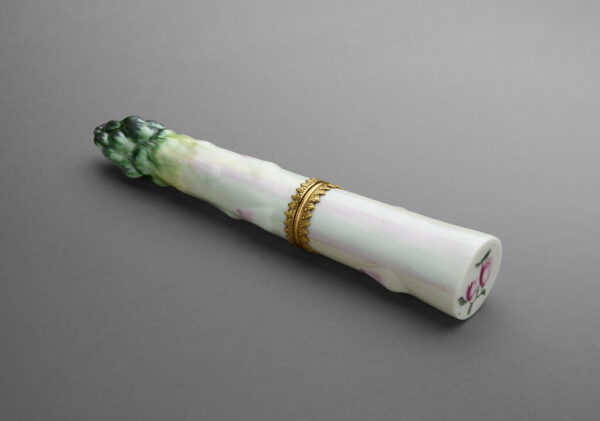 As new plants entered Europe, the popularity of home gardens and greenhouses grew. Beyond the satisfaction that nobles and gentry gained from propagating a foreign plant on their home soil, people increasingly wanted nature to be something that they could touch and hold on to. A small porcelain etui from the Chelsea Porcelain Works is a delightful example of this preoccupation. This unexpected imitation is sized and painted exactly like a real asparagus, and fits easily in a pocket or palm of the hand. Its center is divided by a delicate copper clasp, where a woman could store her sewing needles, hair pins, cosmetics, or other personal effects. In this way, nature became a complete object — one that can be touched, made functional, and kept forever.

Perpetual Bloom shows how Europeans of the era surrounded themselves with their own idiosyncratic versions of nature. The exhibition also draws surprising parallels to the ways that many people today — through months of isolation due to the pandemic — have also sought comfort in the natural world, even if it’s just a few potted house plants.