by Mary K. Cantrell May 12, 2021
FacebookTwitterEmail 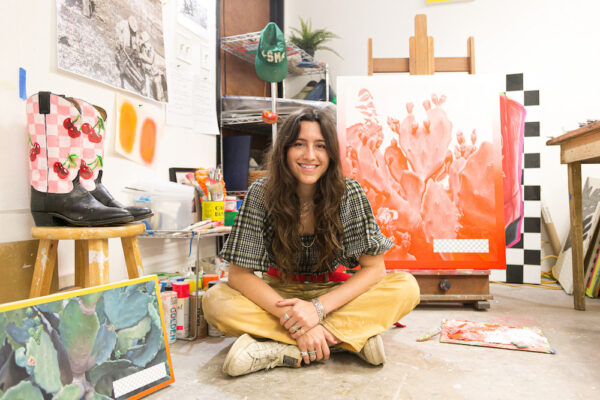 Calhan Hale in her studio. Photo by Cody Bjornson.

To be dropped down into one of Calhan Hale’s paintings would be like waking up as Dorothy in the Land of Oz for the first time, except you’d be in Texas, in ruby red cowgirl boots instead of slippers, and you’d be surrounded by larger-than-life prickly pear cactus clusters, neon sunsets and bits of a modern, digital vernacular both familiar, yet strange.

The emerging artist, and native Texan, is on a mission to paint her Texas, by reevaluating everyday surroundings and playing on lone star iconography.

“There’s nothing about Texas that’s a quick read. I think I’m a really small scale. What I’m trying to do with these works is take elements pulled from stereotypes, my own experience, or from stories that have been passed down to me, and bring them into conversation with something else that’s informed my experience, which has been growing up as a digital native.”

The Things I Heard Were True, a selection of Hale’s vibrant, painterly works, is on view in the garden space of Martha’s Contemporary in Austin until May 16. Hale’s pieces accompany a show by artist Christian Ruiz Berman in Martha’s main gallery space. Hale’s Texas chic paintings have captured many collectors’ fascinations, as of this publication date her show at Martha’s was nearly sold out.

Hale, 27, grew up in Houston and graduated with double majors in Studio Art and Advertising from The University of Texas at Austin in 2016. She grew up in a creative household and frequently spent time at her grandparent’s ranch in South Texas. Her family has been in Texas for generations. 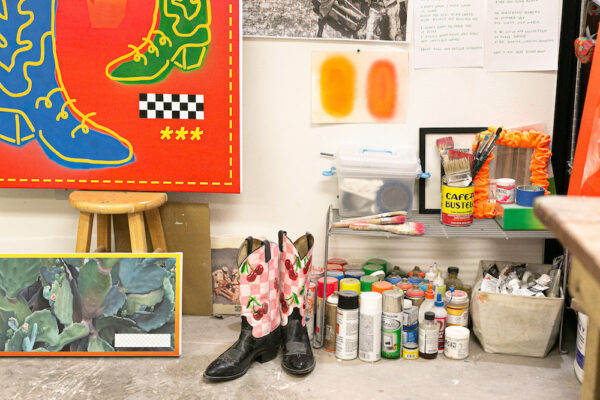 Hale says she felt the self-inflicted push to move to New York or Los Angeles many early-career artists experience, but got sucked into the interesting things that were happening in Austin. She fought preconceived notions about what it meant to stay, and shifted to redefining what it meant to her to be a Texan, which in turn influenced her paintings.

“When my mentality shifted about leaving, and I decided to stay here, it kicked off this whole, like, looking at what it meant to be from Texas, and to own parts of that and reexamined parts of that,” says Hale.

Hale shares a studio with ceramicist Isabel Glatthorn of Soul Matter Studio in a building on Austin’s east side called The Splinter Group, a self-described “consortium of contemporary craftspeople” that is home to the Austin School of Furniture, among others. The walk up to their tucked-away second-story studio space winds through active woodworking spaces. Hale’s works line the studio’s east wall, along with photographs and a handwritten To Do list for a painting in progress. 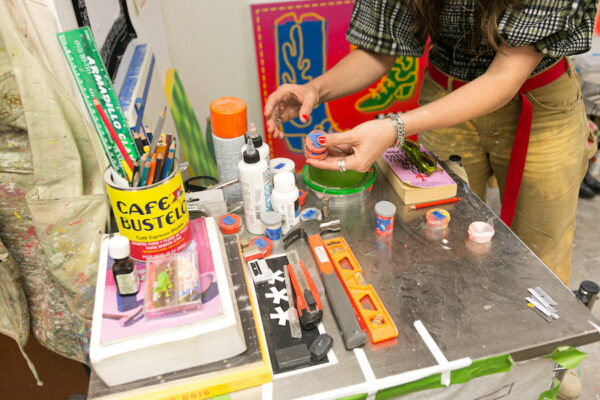 The artist aims to be a force for local representation in a rapidly-changing, ever-developing environment. Hale primarily works in acrylic and oil paint, but wasn’t always so secure in her choice of materials or subject matter. She recalls a time in college when a professor encouraged her to embrace acrylic paint, even though she internalized the idea it was too low-brow.

“I think when I started out in art school, I had this preconceived idea of what it meant to be an artist and I thought I could never be that. I didn’t realize I had anything to say or to paint about. I didn’t know what justified being a worthy subject for a painting,” says Hale.

During her Junior year, Hale had a breakthrough after being inspired by female painters Dana Schutz and Katherine Bernhardt, as well as her professor Dan Sutherland’s use of color. The surrealists nature of Schutz’s work and Bernhardt’s use of everyday objects led Hale to trust her instincts. She says she sees how “finding her voice,” so to speak, will be a lifelong pursuit.

“It blew the lid off of what a painting can be and why it can exist,” says Hale. “I think having the freedom of ‘these materials are at your disposal, use them, these paintings can be anything’ was really exciting, which maybe sounds obvious, but I think there’s so much pressure that I had to get to a point where all of a sudden that made sense.” 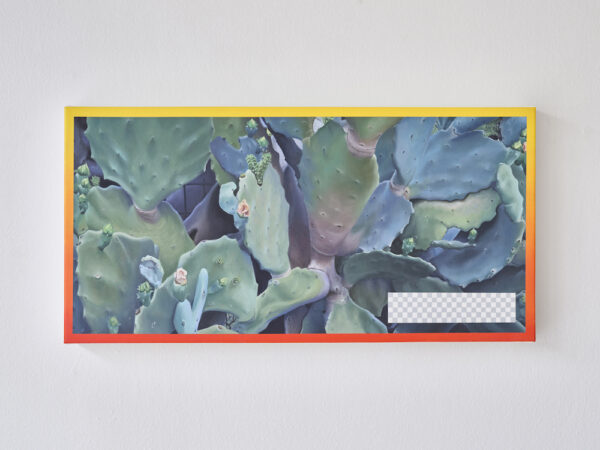 Rather than being excited about all the extra time to paint due to the coronavirus pandemic, Hale says she was creatively paralyzed for a while, then slowly woke up to her senses by simply noticing a large prickly pear cactus in her neighborhood she passed almost every day.

“I think cacti are one of many things that get lumped in with the idea of Texas. I think there’s something to be said for taking a closer, more personal look at them,” says Hale. “They really are super strange, beautiful, complex — none of them are exactly the same. They’re alien, almost cartoony.” 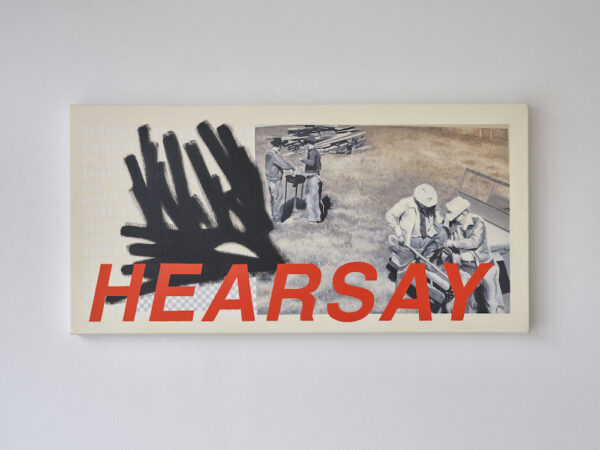 Hale has also been inspired by family histories, painting a scene from an old black and white photograph of her great great grandfather and his cousin, nicknamed Short Tom and Long Tom, in her work titled HEARSAY. Hale keeps stories about the cattle industry, life on the ranch and the grit of South Texas with her when she creates, often comparing that experience to hers growing up near downtown Houston.

Hale often paints gradients in neon sunset shades, sometimes creating clean-lined frames around cacti or other subjects using painter’s tape and clear gesso for a tight seal. Another graphic opposition that makes its way into Hale’s paintings is the Photoshop transparency checkerboard in grey and white, and the classic taxicab black and white checkerboard. Hale says she likes the way the checkerboards act as a space where both black and white can co-exist in the painting.

“It’s often hard to tell when one thing stops and another begins. I use gradients to acknowledge that things are changing, things are shifting, things can be two things at once,” says Hale.

The hyperbolic nature of Texas speech and Hale’s fondness for picking up phrases have also made their way into her work, offering a punchy, graphic element amidst more organic plant life and natural forms. The bold text is a nod to Kid Pix and Microsoft Word Clip Art, digital interfaces the artist experienced growing up.

“I grew up watching Nickelodeon and I also grew up on the computer, with all these colors that were backlit by light,” says Hale. “And growing up seeing Texas sunsets — there’s all these elements that have informed my appreciation and almost forced attention to color as this thing that can speak for itself.”

To learn more about the artist, visit her website. Her exhibition ‘The Things I Heard Were True’ is on view at Martha’s Contemporary in Austin until May 16.