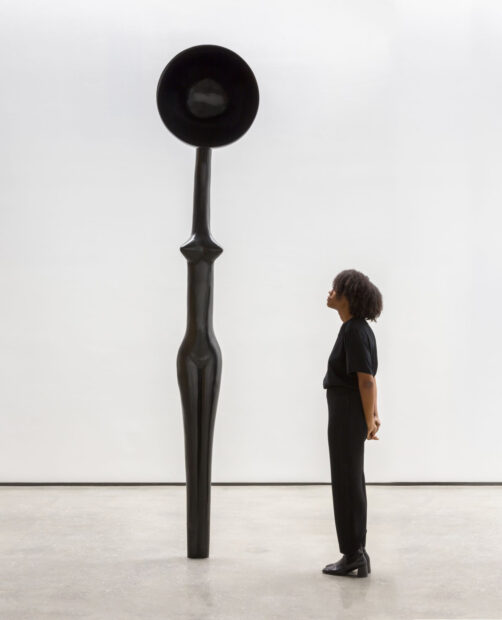 The University of Texas’ public art collection and program, Landmarks, has announced that it has acquired Sentinel IV, a sculpture by New-York based artist Simone Leigh. This is the first Landmarks purchase of work by a Black woman. The collection thus far holds around 50 works of modern and contemporary art, and will now include Leigh’s ten-foot tall bronze sculpture, which will be unveiled on July 15, 2021. The unveiling will offer a virtual Q&A led by Dr. Stephanie Sparling Williams and the artist Leigh.

Leigh is scheduled to represent the United States in the 59th Venice Biennale, scheduled for 2023, and will be the first Black woman to do so. A story reported by artnet news reveals that Leigh’s Biennale work “is being commissioned by the Institute of Contemporary Art, Boston, which is also staging the artist’s first museum survey show, scheduled for 2023.”

Leigh’s work focuses on Black women empowerment, with elements from objects of the African Diaspora as a source of her inspiration.

“Sentinel IV honors Black femininity while also investigating historical and intersecting ideas of race, beauty, and the association of Black women’s bodies with work,” reads Landmarks’ announcement. Landmarks Founding Director and Curator Andrée Bober adds, “Simone Leigh’s sculpture is an offering that can begin conversations. I hope it promotes a space where various histories can be told, and different voices can be heard.”

The sculpture will be placed at the renovated Anna Hiss Gymnasium, the site of the former women’s gym. Landmarks states that it is in dialogue with students, faculty, and members of Austin’s Black community regarding its context on the UT Austin campus.

Beyond the Q&A with Leigh, Landmarks is also working with Sparling Williams as a curatorial contributor. Williams is Associate Curator at the Mount Holyoke College Art Museum in South Hadley, Massachusetts. William states: “Leigh is one of the greatest artists working in this moment. Her sculptures are beautifully worked and her feminine forms, in particular, are fiercely rendered. In Sentinel IV, Leigh masterfully crafts poetry in bronze. It is especially exciting to see her work installed in an academic setting with such rich history and cultural vibrancy.”