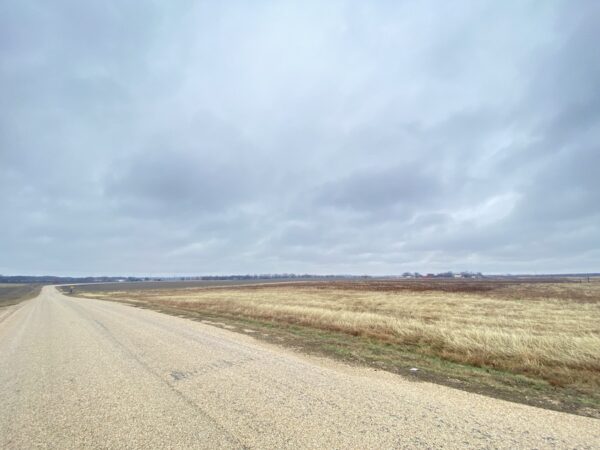 For the introductory essay on this series, please go here.

The wide and open horizon extends endlessly on both sides, bisected only by a two-lane highway. On my left, the railroad tracks run parallel with my trajectory through the flatness of geography that makes the line of sight feel limitless, and — contrary to physics — makes my moving car feel suspended in stillness. This sense of stillness is, oddly, fitting for movement between places. It’s the necessary transition time of in-betweenness — the process of processing; leaving then arriving.

This time I am floating between the time and space of Highway 95, which runs nearly parallel to Interstate 35 from Bastrop until it ends in Temple, a north-northwest trajectory I pick up outside of Austin that takes me almost into the downtown center of Bartlett, Texas. 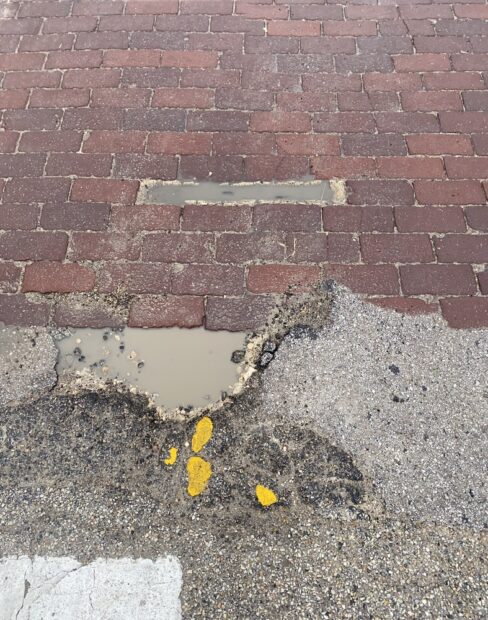 The homogeneity of the rolling green fields that surround me are disrupted as I turn left onto Clark street, and the smoothness of the paved road changes to the rumble of red bricks paving the street from one end to the other. If the feeling of stillness in movement is an aberration of physics, then turning into Bartlett feels like an aberration of time. Building after building stands almost perfectly preserved in its history, in the moment of the glorious heyday the town no doubt once enjoyed. 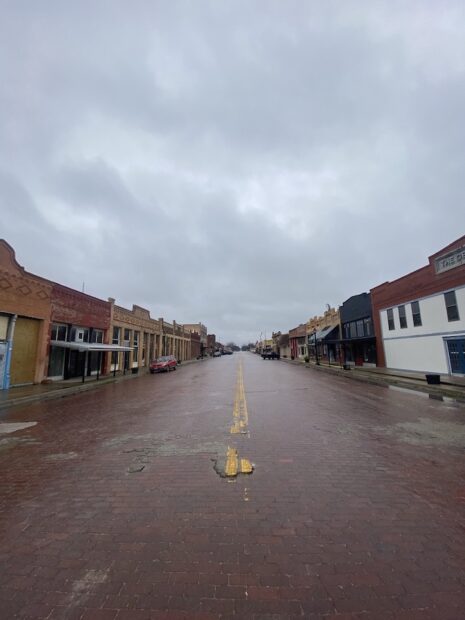 This red brick is a signature element of Bartlett’s downtown, almost as if the buildings rise up directly from the substance of the street. The town is built with a cohesion of architectural elements and materials of any historical Texas fantasy. This is the architecture that hosts allegories of the Wild, Wild West, the setting for great myths and stories of our state, and the backdrop any non-Texan imagines that all of Texas is. In image, at least, that myth is still alive and well in Bartlett, where the historical buildings remain remarkably intact, and where the somewhat sleepy town is actually abuzz with activity if you spend enough time there to see it. 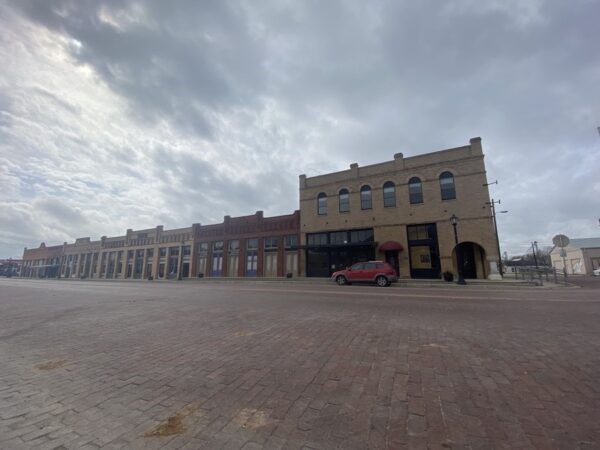 Bartlett is beautiful. Bartlett is historical. Bartlett was a boom town for much of its history, but as the story goes, it was in the 1930s that it started to decline. In its prime, Bartlett was a productive cotton and farming community, until the industries went bust. It was home to many thriving businesses, and the four former banks, one on each corner of its downtown, is evidence of a former prosperity.

Bartlett was officially incorporated in 1890 with a population of 1,000 residents. Originally the city was planned to run along the Katy Tracks — as the railroad was called —  and extend north and south, but its growth occured east of Highway 95 and up to the west side of the train tracks. Occupying four main plots subdivided by public alleys, the town’s buildings are impressive not only in their cohesion, but in their scale. They are all enormous, and each is currently being renovated to remove the drop ceilings and baroque fittings of the 1970s and ’80s, in order to return each building to its original glory.

And it’s worth it, because the original glory is indeed glorious. 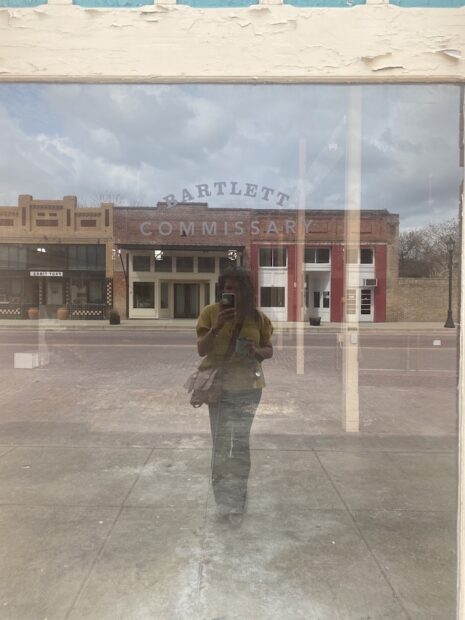 Each side of the street is lined by one- and two-story constructions with level cornices, storefronts that allow light to shine through the front, and adornment so subtle that the architectural styles fit together seamlessly. (I mean that literally, as each building shares a wall with another.) Together with the remarkably well-preserved brick, the two-block area of downtown is not only visually stunning, but it also carries a mass — a weight of presence and import. One feels that this was once a place to rival places, a city of pride in what it was and what it could be. 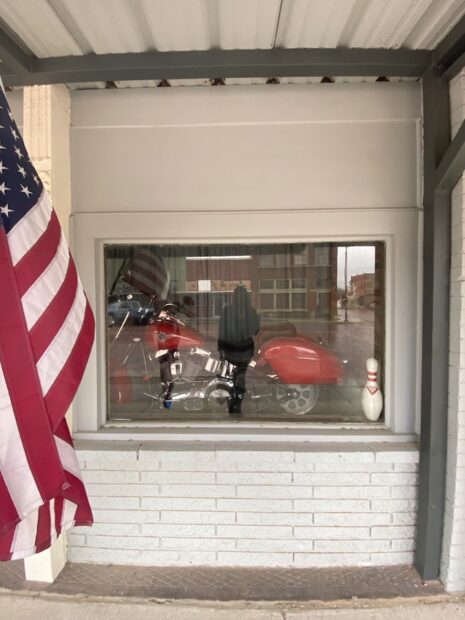 I stood in the center of Clark Street and watched the train pass along the railroad at the far end of downtown like a punctuation mark, one that marked a time in history that was pivotal to both the Texan dream and the promise of prosperity via United States engineering. A clunky, loud, rumbling anachronism of progress in our Tesla-driven world. Indeed, Bartlett is a place that exists in the liminal space of the present, a time that is ever-evolving between past and future; a border of time. Bartlett is in a moment in which the collision of these anachronisms may end up mapping what its future can be. 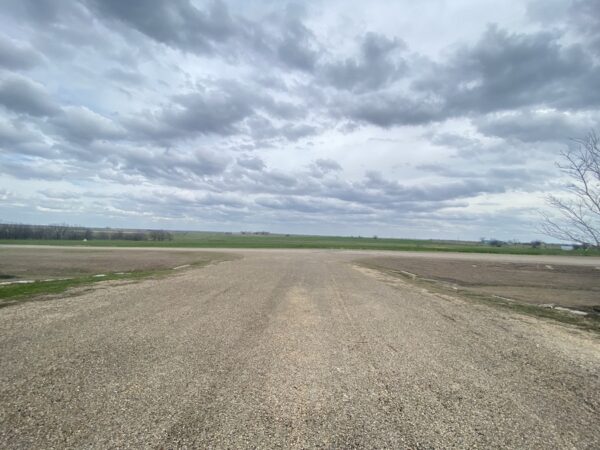 It’s hard to imagine Bartlett as a thriving center, regardless of its impressive architecture and the history that I’ll lay out in forthcoming articles. But it is my job to learn, to share, and to imagine a future Bartlett thriving just as much as the Bartlett of the past did.

Look for Part 3 of this series on May 10. To learn more about Bartlett, please follow @downtownbartlett. For information about the artists follow: @aimeemeverettart,@laursen_art, @jadewalker_studio, @mjmenjivar, @LeslieMoodyCastro

The Bartlett Project, Part 4: Bartlett is Not...

The Bartlett Project’s Public Opening Day Is Upon...

The Bartlett Project, Part 8: A Building and...

It’s great to see real estate developers appreciating the value of art and artists to their projects, but artists need to insist on being truly invested in the development schemes in which they participate, lest they be left out in the cold when they pay off. Artists and art organizations should look to get equity- permanent ownership of land and or buildings they improve. Grants, stipends and free working or living space are great, but artists are the first ones to be pushed out when rents and property values rise, unless they are owners, too.

That is a great point, but we also have to be considerate of the local population which is even more vulnerable to losing its own space. Artists in this project have been compensated for their work and research, but at this point, the question is: how do we proceed as artists in an art world that is historically unwelcoming to vulnerable communities?

So before we can even arrive at a point of thinking of artists getting pushed out, how do we move forward with economic development without becoming the reason residents are pushed out, and further forgotten.

I’ve always felt that artists and arts organizations are the only the bad guys in gentrification when they are transients. An artist seeking out a permanent, cheap place to live an work for themselves is only doing what everyone does. An artist who trades ingenuity and cultural capital for cheap living and working space, then moves on, is the tool of others.

I concur in Bill’s comments; and even where artists know they’re likely to move on, with the right kinds of ownership, they can benefit from any appreciation in the value of the property and/or exercise some control over who it’s sold or leased to when they leave.

The development of Race Street in Fort Worth is an example of the problems and possible solutions in Bill’s and Carolyn’s comments. A group of artists were able to work on Race due to the sincere philanthropy of a dear woman who owned a lot of buildings there. We had brightly lit, air conditioned and heated studios for a price we could swallow. What artist gets that? Lauren Cross was able to establish her PhD project gallery, WoCA, on Race, and that’s where I first saw work by Leticia Huckaby. Rachel Livedalen subleased a space on Race. Jay Wilkinson and Jeremy Joel worked out of an abandoned gaming hall. It was artist paradise. The developer who eventually moved in valued the artist vibe on the street and worked to keep what he could and still make money- one or two of the artists are still there. ( gdtapia.com) But all the studios are gone. It’s nice apartments and great dining now, although Dino’s is still there and a great place to grab a beer.
My point is that NO, artists cannot afford to buy. You don’t think we would if we could? I had to explain to the developer that studio rent comes directly out of my grocery money, and I finally saw the light bulb hit him in the head. Insist on being recognized and included? Sure, if we make things all pretty for free! Areas become artist-friendly because they’re dead cheap- I talked my way into a 1,000-square-foot space there for $50 per month because it was a rat hole, and I never spent the money to turn on the utilities. Thank god I had an actual home to go to. Others don’t. Cities do not allow us into abandoned buildings because of insurance and legal concerns. We ARE transient, and not by choice. And female artists have to be extra-careful. Don’t paint long after dark, honey. This ain’t a nice area.
We benefit from being within a community of people working together. If that place could be stable and affordable, we’d stay. I am now grateful as hell to have a studio at the Fort Worth Community Arts Center, but if the City doesn’t pony up to keep the venerable old place in good order, I have to wonder it even it will go the way of Race.