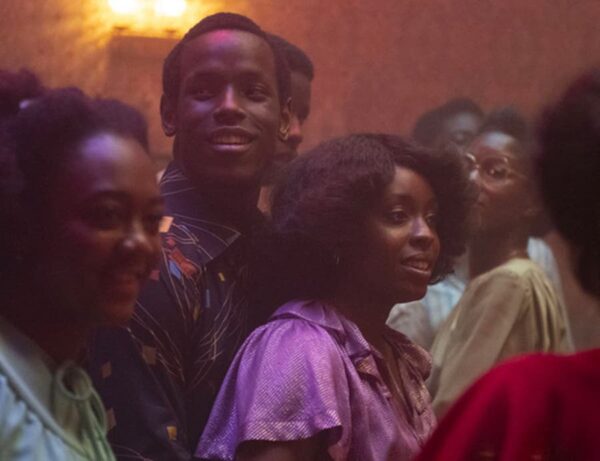 At the pinnacle of Steve McQueen’s most recent movie, Lovers Rock​, the DJ at a crowded house party starts to spin Janet Kay’s “​Silly Games”​ — a 1979 staple of the romantic reggae sub-genre that the movie is named for. In the scene, eyes drift shut and bodies start to sway in unison as the sweet, bouncy melody melts over partygoers like a spell.

As the song goes on, the camera draws closer to the crowd, lingering inches away from hands caressing waists, lips mouthing lyrics, and condensation dripping down a golden wall. When Kay’s voice cuts out toward the end of the song, the crowd continues to sing, giving all they’ve got to the impossibly high note at the end of the chorus. While watching, my mom and I started singing along almost involuntarily from our couch. By the end of the 10-minute scene, we were entranced.

In reality, it’s been more than a year since I’ve been to a party. My senior year of college kicked off remotely last August, and though I haven’t seen a red Solo cup in months, I’ve definitely cried enough to fill one up. But watching ​Lovers Rock​, I was completely submerged in McQueen’s world, and momentarily sheltered from the horrors of the real one. It was one of the most joyous moments of my pandemic life.

The past year has been filled with insurmountable anger and grief, and I have no idea how I would have gotten through it without movies. They’ve granted sanctuary from chaos; satiated my desires to travel, to gather, to live in a world where I don’t have to sanitize my cereal boxes.

Through these trying times, I’ve returned to old favorites for comfort like tattered stuffed animals. In April, I put on ​Clueless ​and followed Cher, Dionne, Tai and Murphy to that party in the Valley, newly envious of their ability to play a game called “suck and blow” without being terrified of breathing on each other. On a drizzly morning, I watched Singing in the Rain,​ then tap danced around my apartment all afternoon. And during a particularly low week, when I was filled with sadness but couldn’t find a proper outlet, I put on ​Lady Bird,​ knowing that the airport scene was guaranteed to bring me to tears.

During this era of countries locking down their borders, the only traveling I’ve done has been via film. In September, my dad showed me the 1985 “ramen-western” ​Tampopo.​ At its heart, ​Tampopo​ is a love letter to food and indulgence, filled with saturated shots of ripe peaches, raw eggs, and steaming ramen. I felt my senses heighten while watching it, the way they often do when I’m traveling somewhere new.

In December, my family fell in love with the work of director Alonso Ruizpalacios, transported by his films ​Museo​ and ​Güeros​ to Mexico’s Mayan pyramids, crowded highways, and the dazzling National Museum of Anthropology. In May of last year, we watched ​Alelí​, the 2019 Uruguayan dramedy about a family dealing with the death of its patriarch. Watching the characters nervously smoke cigarettes and chatter around their kitchen table made me feel a little closer to my own family, half of whom lives in Buenos Aires. I haven’t seen them since the pandemic began.

Of course, none of this movie watching took place in a movie theater. The last film I saw in theaters was ​The Invisible Man.​ It was early March 2020, and I took a date to see the Elizabeth Moss-led horror flick at Houston’s Regal Edwards Greenway Grand Palace. The complex itself is an homage to Hollywood: after buying tickets, you walk into a lobby flooded in neon pink lighting, its walls featuring murals of celebrities like Brad Pitt and Gwenyth Paltrow in suits and gowns. My date and I bought snacks, then sunk into those plush reclining chairs for what soon revealed itself to be the last time in a long time.

A few weeks later, like falling dominoes, movie theaters across the country announced that they would close indefinitely. Although supportive, and aware that it was the right thing to do, I was also heartbroken. As days became weeks, then months, I longed for the times I could chow down popcorn and twizzlers in a room filled with friends and strangers, laughing and crying at the same work of art. And I wondered, now that watching a movie was no longer an intentional decision so much as second nature (because, well, what else would we be doing on a Saturday night in quarantine?) — would watching them be somehow less special or personal? Would they all just blend together?

Now, almost a year into this pandemic, my answer to those questions is a resounding no. Even in times of peril — perhaps, especially so — movies mean something. Sure, they offer escape, but they also embed themselves into our personal histories: our memories of them are inevitably tangled up in whatever else was going on in our lives when we saw them.

When I think of the movie ​He’s Just Not That Into You​, I think of my last days in Houston before flying home to D.C. after classes were cancelled, finding a smidge of joy and stupidity with a friend before everything around us turned dystopian. When I remember ​Portrait of a Lady on Fire,​ I remember the first night my girlfriend and I were able to touch after dating at a distance for months, the film mirroring our own yearning. And ​Disclosure​, Blindspotting​ and ​13th​ will always remind me of sweltering summer days spent protesting police brutality at the White House, and of the conversations they sparked at night in my household.

Like so many industries, the future of film is in jeopardy. The pandemic has accelerated a shift from theatrical releases to streaming services that was already underway before 2020, and many speculate that Covid-19 is the nail in the coffin for movie theaters. But it’s ​not the first time​ we’ve read Hollywood’s obituary. Talkies, television, VCRs, DVDs — these all supposedly marked the death of moviegoing, until they didn’t. This moment might seem particularly grim, but I find myself siding with New York Times film critic A.O. Scott, who ​wrote​ with tempered optimism about what this all means for movies:

“Making predictions, in addition to being foolish, is an expression of passivity, an acceptance of our diminished role as consumers of culture. Instead of wondering what might happen, what if we thought about what we want, and thought of ourselves not as fans or subscribers, but as partners and participants?”

If this year has shown me anything, it’s that I want to watch movies, whether they be foreign films you can only find at your local indie cinema, or trashy rom-coms. I will want to watch movies regardless of how unprecedented the times are. And when the masses are vaccinated, and it becomes safe again, I will be first in line to partake in the transportive experience of watching a movie with all of you — arm-to-arm in those plush seats, the ones I’ll never take for granted again.

“Lucas, Can You See This?” National Cowboy Museum...

Letter From the Editor: Week of April 13