Myths and Other Concerns: April 2021 Exhibitions in Dallas 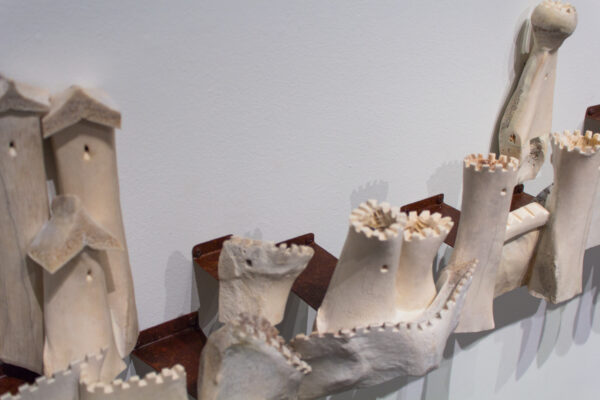 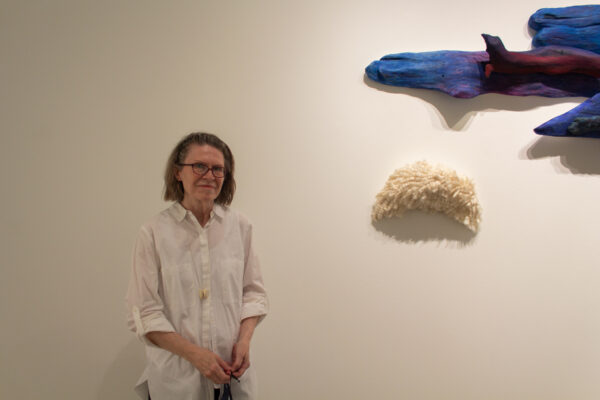 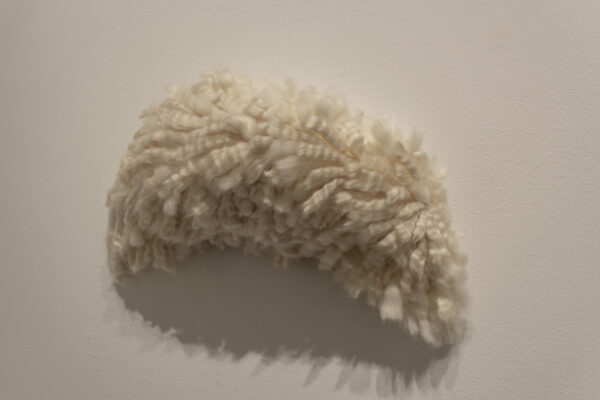 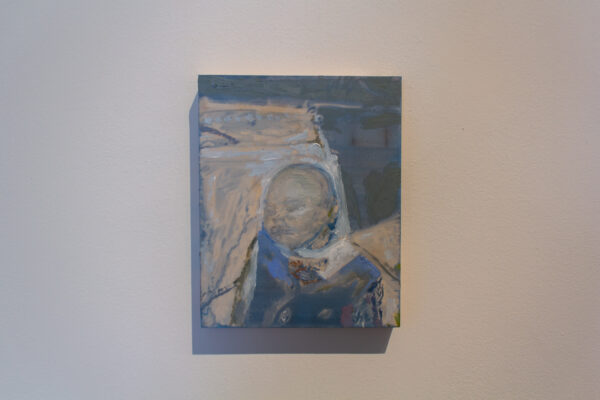 Joshua Hagler: “Drawing in the Dark” on view at Cris Worley Fine Arts 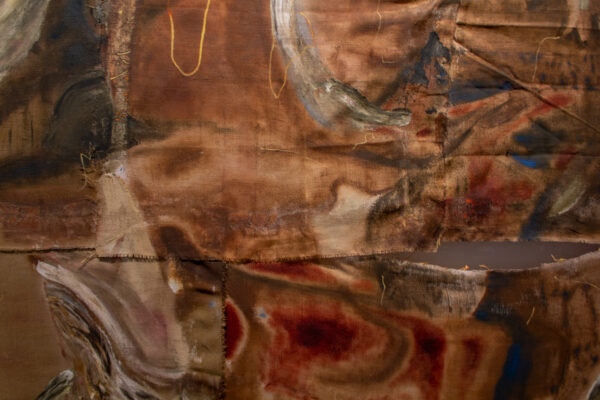 Joshua Hagler: “Drawing in the Dark” on view at Cris Worley Fine Arts

Celia Eberle: The Reanimation Project, and Joshua Hagler: Drawing in the Dark, at Cris Worley Fine Arts, April 3–May 8, 2021

Technology and its products have generated their own mythology. With a few circuits and a nifty patenting strategy, gadgets are assumed to make us smarter, faster, stronger, even if they only seem to replace things that are already working. This is the central focus of The Reanimation Project, the newest exhibition by Celia Eberle. When asked how she feels about all this progress, she says: “I’m more concerned with current problems, which are timeless. Our technology evolves, but we haven’t evolved that much. We’re the same people we were when we first invented myths, really.”

Joshua Hagler’s paintings contain marks that fight for air; patches have been picked at, revealing more mixed media underneath. He paints at night, when his visual sense will be substituted with other inputs in order to feel what is happening, and what is needed to complete the work. The large square works are Sonogram paintings — sonograms being another subject that lives in the dark, swimming in the amniotic pool of potential. 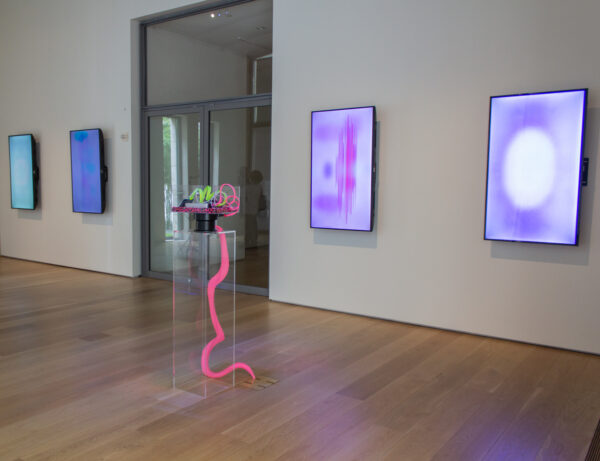 Nasher Public: Melanie Clemmons, on view at the Nasher Sculpture Center in Dallas 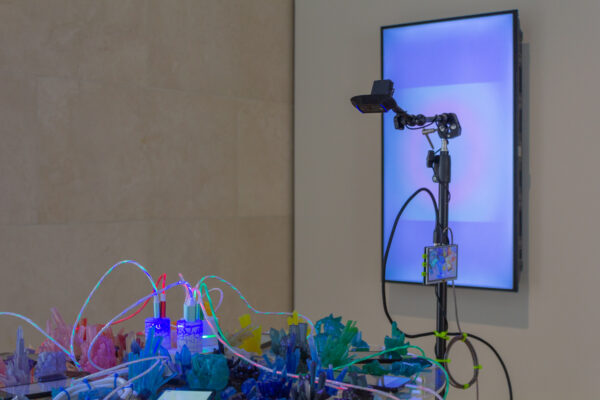 Nasher Public: Melanie Clemmons, on view at the Nasher Sculpture Center in Dallas

The reflection pool of Clemmons’ show at Austin’s Women & Their Work last summer, titled Likes Charge, has been made corporeal here. The SMU professor’s installation is at least partially a translation of the vernality of this body of work. There are plenty of frequencies to dive into with this show, but you can be sure that Clemmons is very literally talking about “charging.” A rotunda of phones and a couple cameras will stand watch through April 25 at the Nasher Sculpture Center. 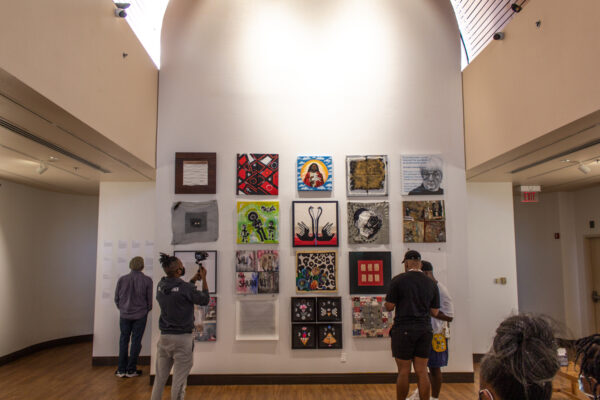 “Tears: Weaponized, Devalued, Reconciled” on view at the African American Museum of Dallas 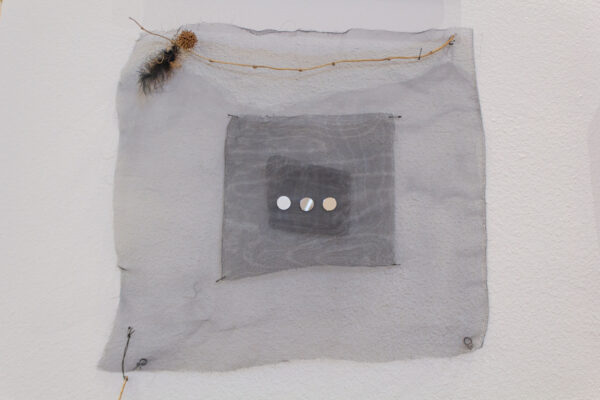 Talley Williams on view at the African American Museum of Dallas 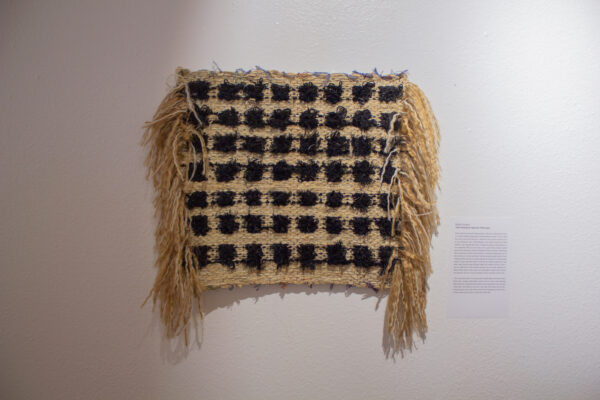 Molly Sydnor on view at the African American Museum of Dallas 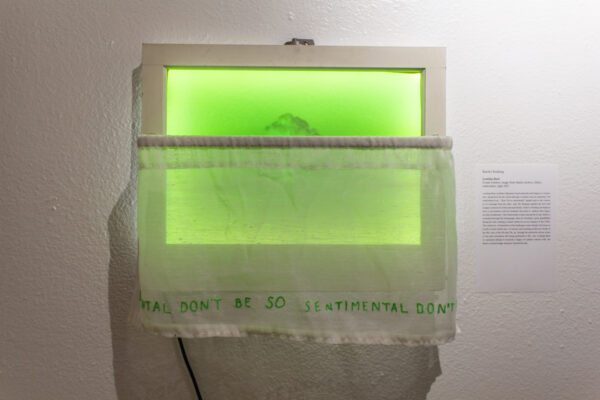 Rachel Rushing on view at the African American Museum of Dallas

This show features two sets of artists — 19 Black and 19 white— who are working out the details of what intersectional feminism’s response is to the legacy of segregation in the U.S. And what a curatorial decision it is — the African American Museum is in Fair Park, a noted border of sought-after land adjacent to downtown and the generationally neglected South Dallas. Inherent in the exhibition is the question: are we on the same page about the hurt that has transpired? The group show had an extended opening reception, which galleries have defaulted to in order to accommodate the necessary distancing for the maximum number of attendants. 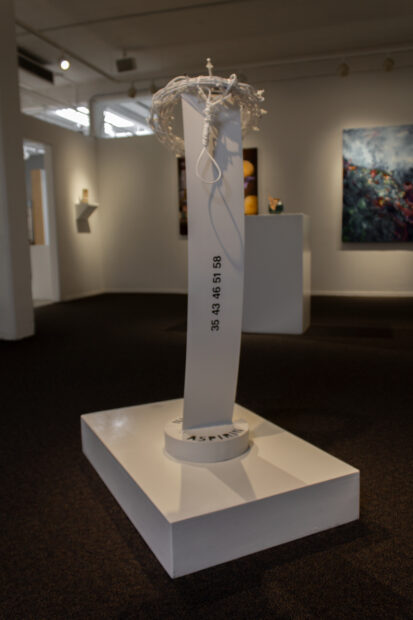 Philip F. Sampson on view at the Bath House Cultural Center in Dallas 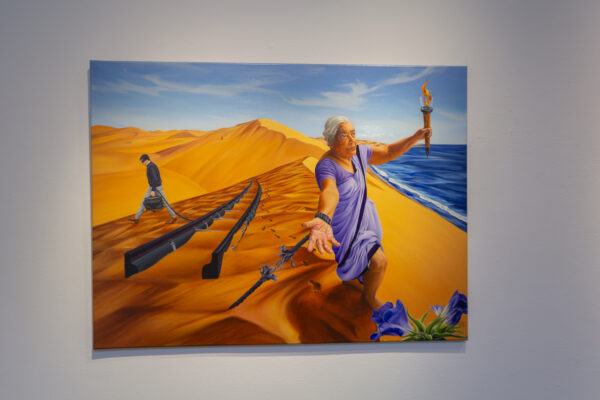 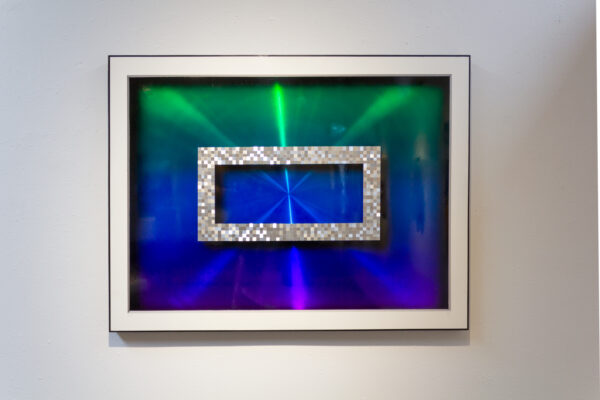 Group shows with a regional subtext happen a lot in Dallas-Fort Worth, simply because there are a lot of artists making work here. Here is an annual show that somewhat organizes them. Four jurors  sift through 1300 submissions, and curator Susan Lecky is charged with placing the works at the participating venues, which include the Bath House Cultural Center, Latino Cultural Center, Moody Performance Hall, Oak Cliff Cultural Center, and South Dallas Cultural Center. 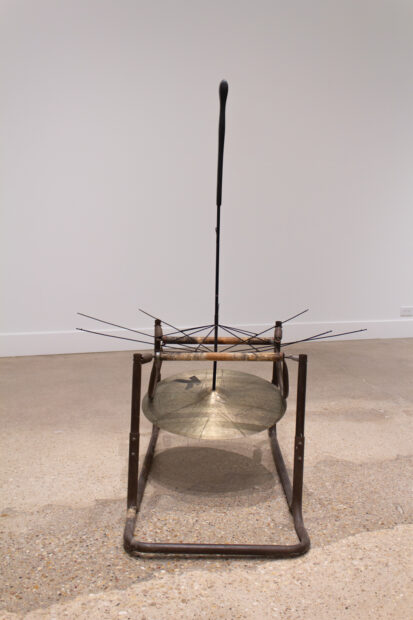 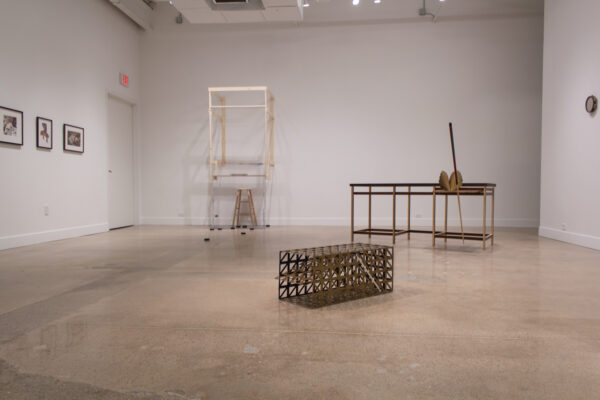 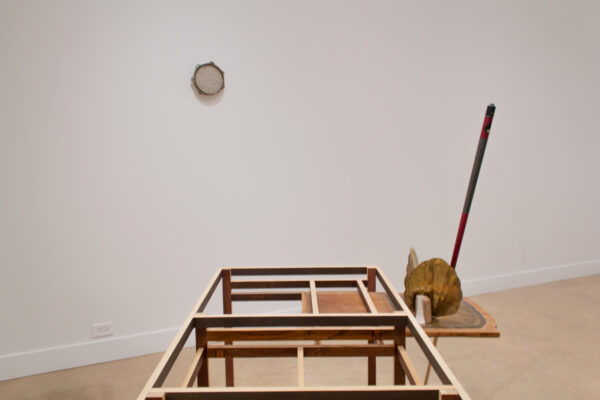 Jones’s experience as an art preparator means that his works have the added touch of being placed just right in the gallery. The show is really several small shows, clustered among themselves in neat thematic packets. Owing to his sculptural prowess, there are many vantage points from which to experience the show. 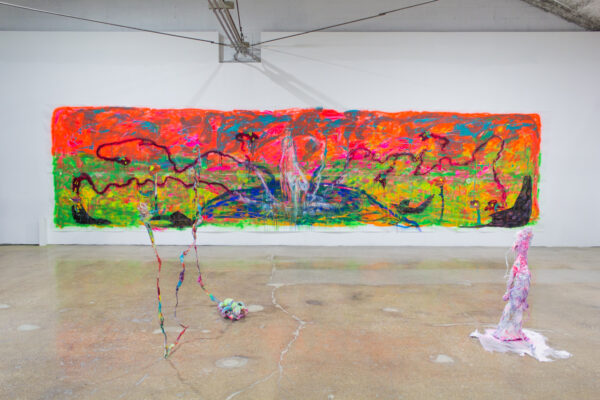 Narong Tintamusik: “They Die Only to be Reborn Again” on view at 500X Gallery 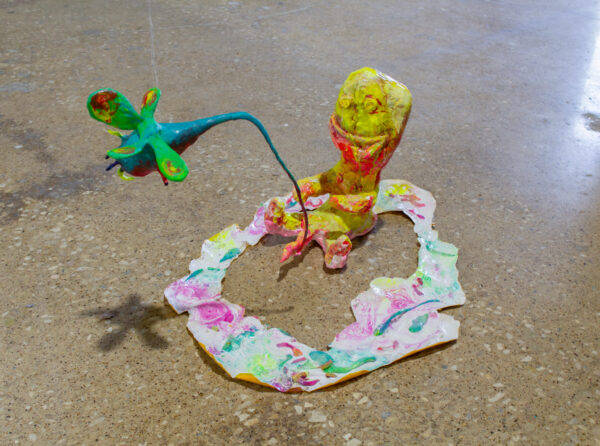 Narong Tintamusik: “They Die Only to be Reborn Again” on view at 500X Gallery

Tintamusik’s first sculpture exhibition this year focuses on reincarnation, following his Buddhist and Thai background. The soul keeps moving from one body to another. As a survivor of abuse, he cites how trauma emerges, becomes dormant, and causes shifts in the individual.

The figure in the central painting mounted to the wall is showering in a lake amongst misty color. Tintamusik’s largest paintings are usually site-specific, and are collaged from previous works. He wanted to do a mural for this show, but he thought painting on paper would give him more control over texture. Of the use of fluorescent color in the show, Tintamusik says, “I want people to be satisfied and full. You feel full, visually, like nothing’s missing.”

This is his first sculpture for this year — wire and clay. The sculptures are about the different stages of life and death, and reflect the stunted phase of development that comes from  facing abuse at a young age. Bugs flit around the figures, referencing nature’s intended path, encircling the trauma cycle of abuse. Tintamusik is not certain whether the insects are representative of anything directly. The bug and the figures live and die in the floor sculptures. 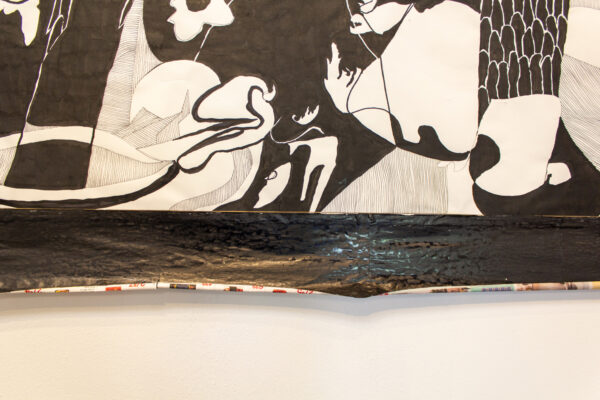 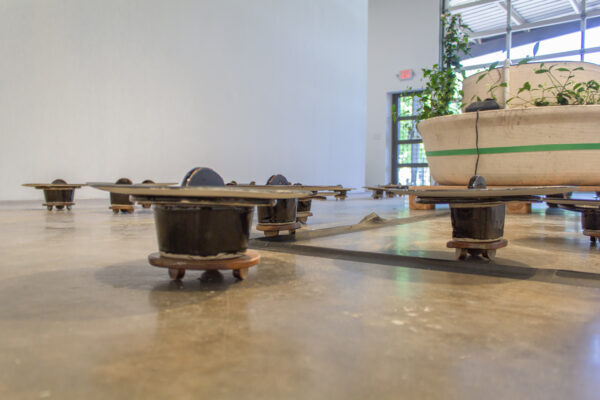 The multitudes within Carter’s oeuvre (performance, ceramics, drawing, and working with food) have met the moment with his solo show Anh Yēu Em. The font, as Allison Klion refers to it, is contained in a vessel, surrounded by flora, and flanked by even more vessels. A mural scale wall drawing hangs on the back wall, and Ex Ovo’s unusual exhibition practice sings another song. Carter has performances scheduled, which will activate the show twice, on April 19 and April 22. Don’t get too active — the ceramic vessels on the floor carry precious cargo. 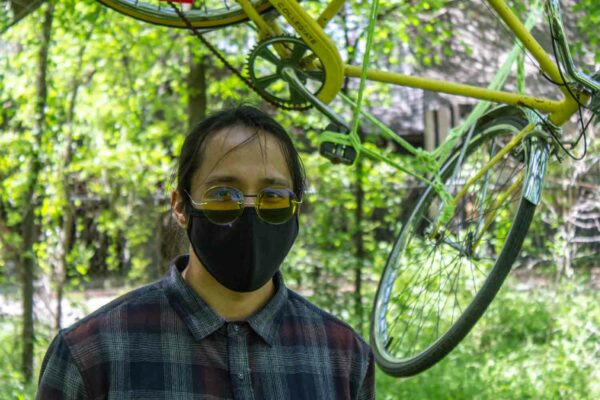 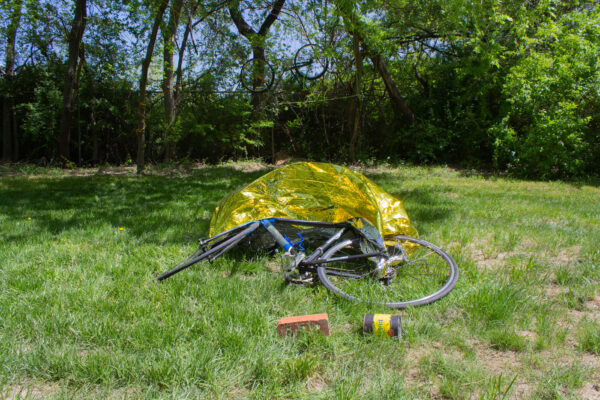 Ex Ovo operator Allison Klion suggested that I stop by Sweet Pass Sculpture Park on such a sunny day to see Araujo’s practice in action. Based in Fort Worth, Araujo traveled to Dallas over a six-week period to place objects among the spring blossoms of Sweet Pass Sculpture Park, which is part of the Fabrication Street strip that developers have recently begun calling the “Tin District.” Sometimes, the drive would alter the his output. We chatted about shows, and I asked him if he had any thoughts on exhibiting work made during the pandemic. He responded: “It’s weird thinking about last year, because it’s not over yet. I haven’t processed any of it yet. Everyone’s been affected” 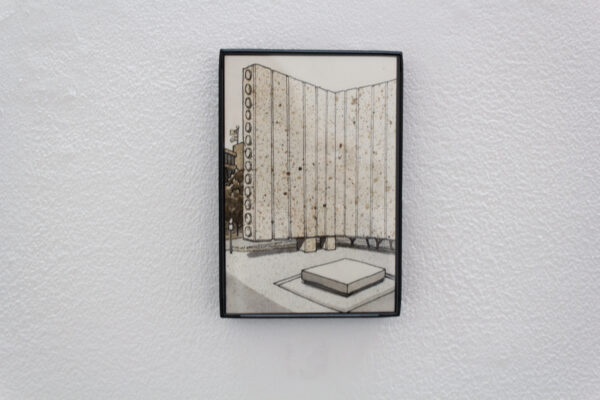 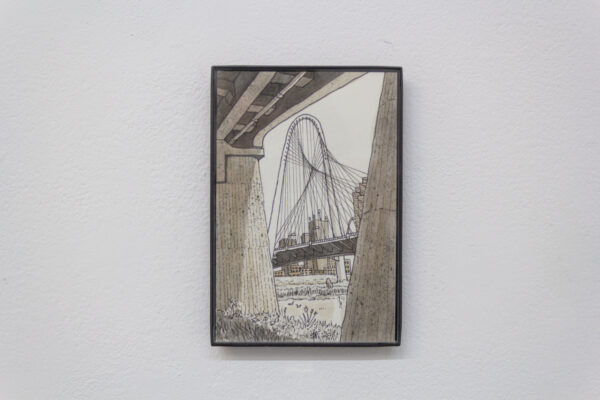 I have seen hyper-real paintings in Dallas, and I have seen cartoonish portraits of Dallas, but I have not seen postcard-sized homages to vantage points in Dallas, pudgy in their depiction and outlined in sepia. Brad Ford Smith captures something about the transience of it all, this concrete capital. 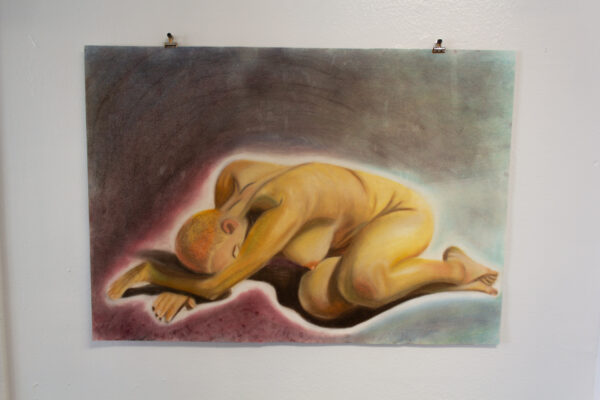 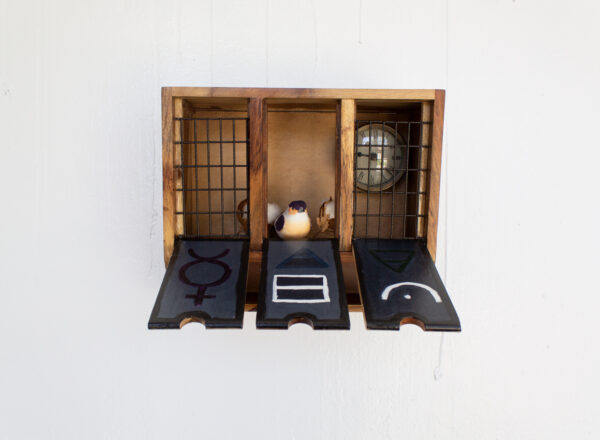 Sunset Studios in Oak Cliff has been in the game for a while. Co-directors Rachel Rushing and Emily Riggert opened April 2016, and have remained flexible while operating Sunset Studios as a non-profit. The org operates out of a two-level storefront just west of I-35 East, with a commitment to allocating studios for underrepresented Dallas artists. Initially, space had been rentable to local artists, but after the pandemic, resources have been restructured to meet the moment. Joi Thomas and Ciara Elle Bryant are the space’s first fellowship artists, which includes studio space with waived rental fees. Thomas’ exhibition Epigenetics is the artist’s rumination on their own heritage through domestic artifacts, as well as painting and drawing. 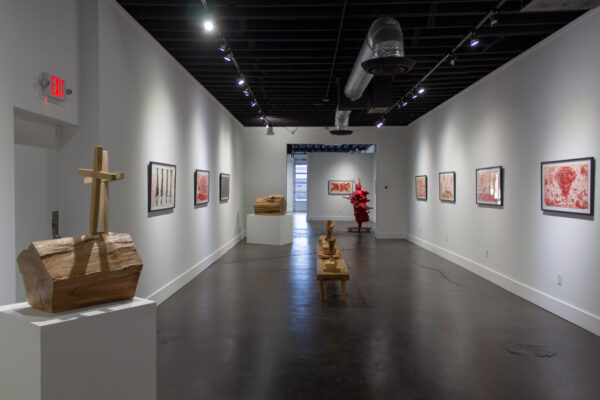 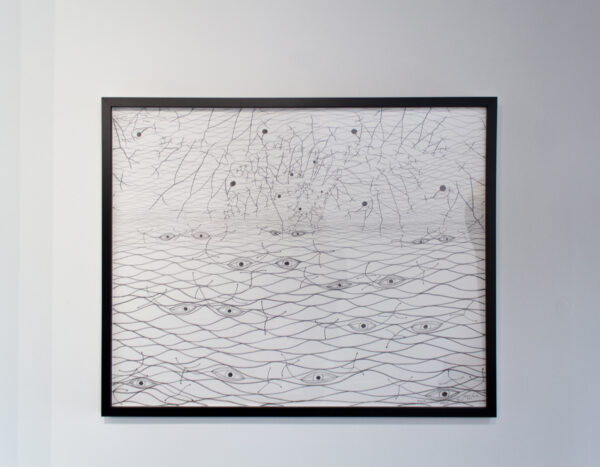 On a recent Top Five video, I spoke with Brandon Zech about the rollout of all the shows that have attempted to unpack the last 12 months (and counting). A lot of us are still processing this time. Do you need training wheels to get things back on track? I myself could use an extra set of hands to stabilize the handlebars. This show did not come with bubble wrap. Crosses and pools of blood are racing across the walls here. Locke’s work is rolling in it, while Surls seems to be carving away in meditation in his tool shed. The energy in this show shoots straight toward through the space, and the further you descend into the exhibition, you feel the velocity increase. 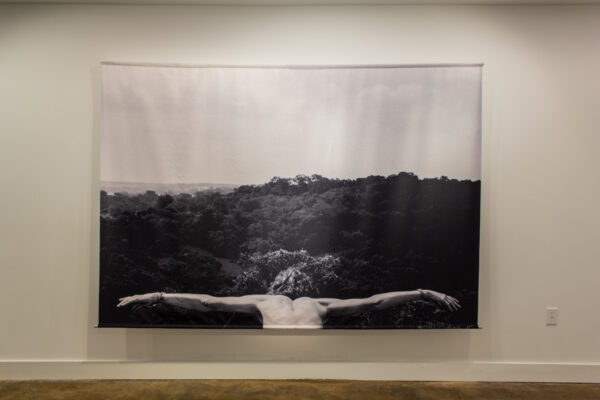 Mary Margaret Hansen and Patsy Cravens on view at the MAC

Mary Margaret Hansen and Patsy Cravens: Finding Our Way, made visible through a camera lens, The MAC, March 21–May 10, 2020

Due to lockdown postponements, it took a year to open this long-awaited exhibition. But it’s here. The show commemorates a friendship, and the cultural period when the work was produced — the early 1980s — following shifts in American feminism and legal obstacles women faced. The didactics of the show are ever-relevant, but they fall away when you see the abandon that two friends find in each other.

Plush Gallery goes on a Summer retreat to...