In a pinch, my apartment complex might have passed as a low-rent motor lodge in a student film. The single-story building retreated off the road and into the trees in the shape of a backward L that hugged a craggy parking lot. At the tip of the L there was a neon sign, which was art: It depicted a hammock tied up between two palm trees. The word Siesta, presented in a breezy blue typeface, rested in the hammock. It must have been a heavy word, because the palms bent dramatically inward at each other. The green and yellow glow of the electric sign illuminated a patch of nearby bushes at night and provided for a handful of tech-noir encounters with nocturnal animals. I can’t remember if this is an exaggeration or not, but it was the sign that sold me on the apartment when I was first looking for a place in Austin.

I lived in the small unit at the corner of the L for all of grad school, as well the year immediately afterwards that I spent confirming that adjunct teaching was horrible. The process of getting an MFA in studio art meant keeping incredibly unhealthy hours, and everyone in the program did it in their own ways. The work, we felt, simply had to be done. I had friends who spent all night in the studio and staggered home at sunrise to sleep for an hour before having to report to 8 AM shifts as teaching assistants. My challenges were staying awake past midnight and sleeping until sunrise. There were many days when I made the mile-long walk to campus predawn, arriving just as the night shift was calling it quits, and groggily shuffling around my studio for a few hours, listening to music and accomplishing very little that could be considered studio art. On one of those unreasonably early mornings, somewhere in the middle of my time in Austin, an event occurred when I left my apartment.

Another feature of graduate school was a never-ending array small traumas sparked by what, in hindsight, were entirely trivial matters. Rows over the scheduling of studio visits and titling of exhibitions come to mind. One of these stressors, long-forgotten, was already causing me a slight uneasiness on the morning in question. Through my window I could see the first bit of the day’s light, although sun had not risen. I was tired, somehow dressed, and carried my camera on a shoulder strap. I opened my front door to leave and found that I was being watched by the ugliest cat I have ever seen.

Actually, to call it ugly is grossly insufficient. This cat, which was crouched up against the side of the building and really just staring straight at me, had the constitution of an otherworldly menace. There was a deep and uneasy strangeness in its massive eyes, a look as if it was, complexly, both a devious creature and an empty-headed fool. Sinister, vacant. I probably said “hello.” It did not move. I raised my camera and took a picture, then took a step forward and took another. It stayed perfectly still and kept me in its gaze. When I thought I had a fine photograph I went on my way. I had a task to complete in the studio.

Reality turned inside out when I reached the place where my parking lot met the road. Those same ungodly eyes were upon me once again. There is a way in which people conjecture about aliens: We often visualize extraterrestrial beings as resembling earthly ones in some way. More likely, if something did exist out there, it would take on a form that we humans do not have the capacity to imagine. This cat had that sort of form. It was so odd, and had appeared so suddenly from nowhere, that it took me a moment to realize that I was now being stared down by a photograph taped to a lost cat poster. Bright orange. A second picture on the sign depicted the thing’s birthday party. There was a cake. I looked over my shoulder at the actual cat, which still existed, and called the number on the sign.

“I see your cat,” I was direct, as the voice that answered belonged to an obviously sleeping person.

I gave my address.

The cat was my neighbor. He had the name of a French king and was not supposed to go outside. He had only been out for a few hours when we met. It struck me that his existence was not only intentional but likely expensive. After a brief exchange with a shirtless and weary man, I resumed the walk to my studio and tried to feel the self-satisfaction of having done a good deed. My path was dotted by more fluorescent posters, and these too surged with the mysterious power of the cat’s unwavering eye contact. By the time I reached campus I had completely forgotten my objectives for the morning. I uploaded the pictures of the cat to my computer, sat back in the chair I had scavenged from university surplus, and stared for minutes into the hypnotic little face. There was so much blunt horror in it, so much comedy. I do not know if this action helped me succeed in grad school. It might have.

Soon I learned that the cat’s owners had aspirations of making him an Instagram celebrity. My research into that feed indicated that the cat and his associates had lived in the complex for at least as long as I had, which made me wonder how I had never seen him prior to that one morning. Because from then on I saw him all the time. I earned the nickname “Your Hero,” which was spoken only to the cat by his people when they were grooming him on the porch. Most days when I came home I found him in his apartment’s window, glaring in my direction, a worse kind of gargoyle. The corporeal beast was just as unblinking as the picture on the posters. He left smudges on the glass.

Weeks passed. My friends started to notice him. Some art historians followed the Instagram in order to terrorize one another with images of the infernal. The highlighter-orange posters remained up and faded to the color of creamsicles. Each one bled the muddy purple of wet CMYK ink. There was no longer a cat to be found. There had never been one, not really. As they decayed, the signs seemed to convey a different message: THIS NEIGHBORHOOD HARBORS A CAT. MOVE ON OR IT MIGHT LOOK AT YOU, AND THAT SEEMS BAD. MAYBE YOU ARE THE ONE WHO IS LOST?

The photographs from my first encounter with the creature quickly vanished into the digital mess of my grad school hard drives. Today, writing this, seemed like the right time to go find them: 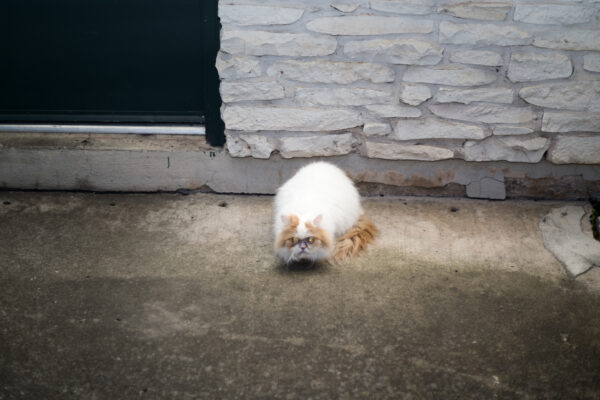 Most of me hopes that the cat’s owners do not read Glasstire, yet even if they do I stand by what I have said. They must know their cat is a polarizing thing, even though I am sure that they have great affection for it. As they should — even most abominations are just looking for a little love. In reviewing the pictures, now, I question the amount of chaotic energy my memory has ascribed to the cat. His countenance might appear softer than I suggested, and it is possible that the element of surprise played a major role in my experience. That is fine. I am willing to accept that. But seriously it was really weird. 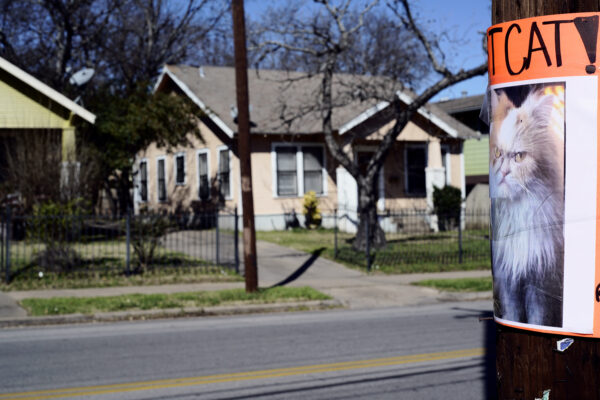 Finally, a pivot: Congratulations are in order to all of this year’s newly-accepted MFA seekers. For whatever reason, several of you thought it made sense to ask me for letters of recommendation. I am pleased that it worked out for some of you, and I mean it with all of my heart when I say that, regardless of the outcome, I believe in you all. Thanks for trusting me with a small bit of your future. The whole process of writing the letters got me thinking about my time in grad school. It really was not that long ago. I thought hard, hoping that I might be able to offer some sort of advice. The preceding essay is the best I’ve got. 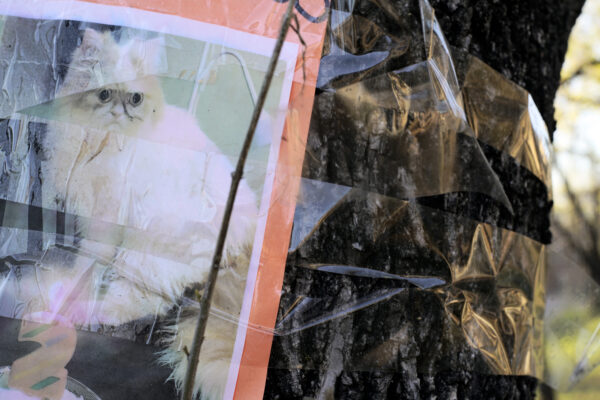 Bucky Miller is a Houston-based artist. His current solo exhibition, Slow Season, is on view at grayDUCK Gallery in Austin through March 28, 2021.

That is one bad-looking cat.