Checking in With the Current Exhibitions at LHUCA, Lubbock 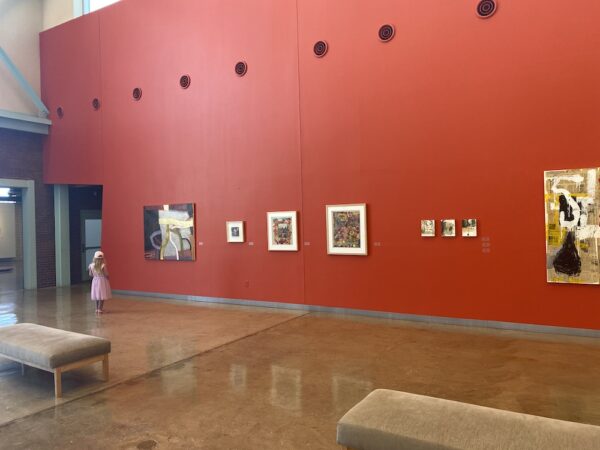 Throughout 2020 and the beginning of 2021, Louise Hopkins Underwood Center for the Arts (LHUCA) in Lubbock hasn’t stopped showing new work on a regular basis. The minute New Mexico lifted its quarantine requirements for out-of-state-travel, I zipped over to Lubbock to catch some exhibitions. (Really, my husband and I were passing through to see his Texan grandparents, who we’ve dearly missed, but I could hardly contain my excitement to be around art again.) Whether I loved what I saw or not, being in this setting felt like entering sacred grounds after being cast out for too long. Like heaven, maybe. Below, three shows that struck a chord with me: 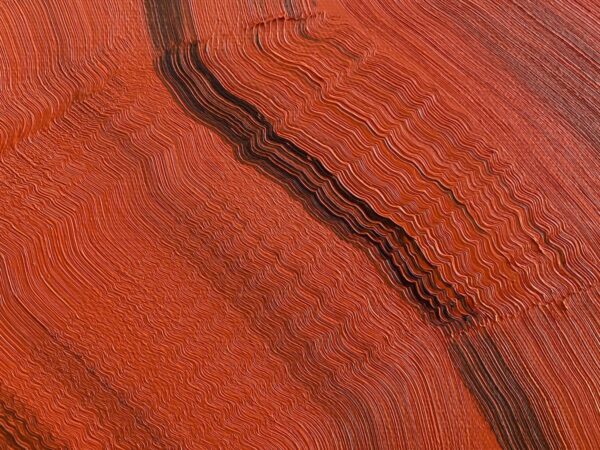 Conduit Gallery @ LHUCA hosts really great work. While I’m a sucker for painting, I don’t always go in for abstraction. However, the vibrating lines in Vincent Falsetta’s works, especially BK 02-10, are astounding. The red-orange square (so similar in color to LHUCA’s “big red wall” of the main gallery space) looks like a hunk of a massive tree interior, or a lie-detector or seismograph gone wild. If I stared long enough it was like a Magic Eye illusion poster of my youth, and different levels would pop out at me. Trippy! Juicy! And if I looked and thought about it long enough, I was gut-punched, thinking about burning redwood forests, catastrophic weather events, and the relativity of time. 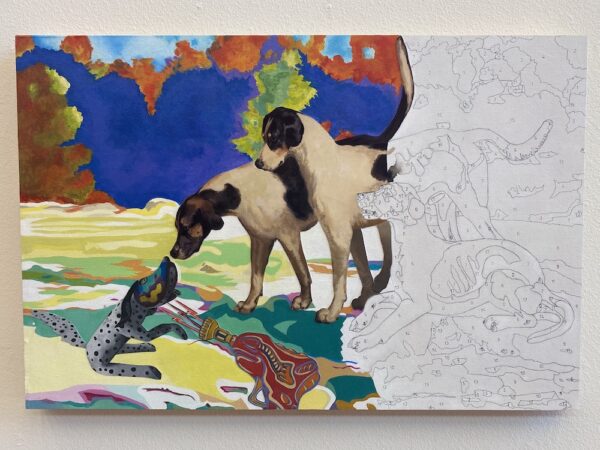 Other pieces in this show, which is simply a group exhibition of artists from Conduit Gallery in Dallas, really sing. My daughter Stevie’s decided favorite, and probably mine, is Robert Barsamian’s What’s the Matter? I’m Still a Dog! I suppose I’m a sucker for painting, and especially paintings of dogs. The paint-by-number references and different levels of brush work play nicely against the abstractions in the show, with a lot of meta-process painting going on. 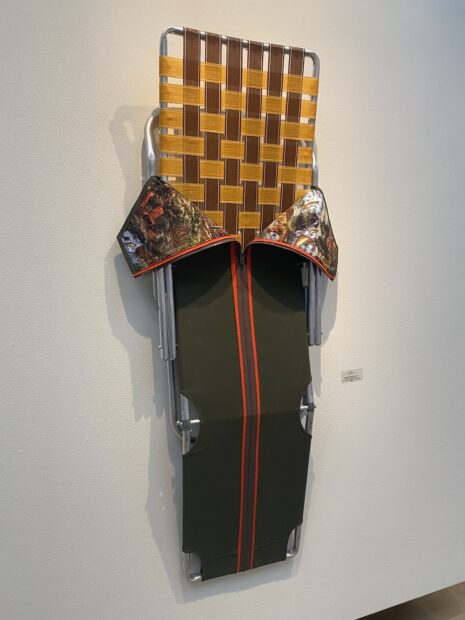 Ed Barr, “Under the Stars”

Directly next to the gallery hosting the Conduit show is LHUCA’s Helen Devitt Jones Studio Gallery, and what appears to be another group show. Now, my favorite piece in the entire center is in this exhibition, which turns out to be a solo show by Ed Barr. With that, I’m going to write something briefly negative. The works on the whole are aesthetically and visually appealing, but the second I peruse the artist statement, titles, or any other text within the show and its heavily-symbolic, gendered imagery, it deflates a lot of the work for me. (I don’t really feel like expending energy wondering which side of feminism the artist lands on.) Still, there is the aforementioned favorite piece: the camp chair that sits like a giant banana on the wall — that is appeeling. Sorry! 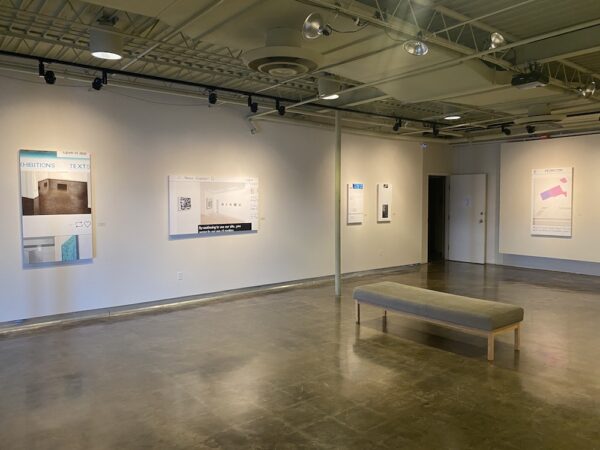 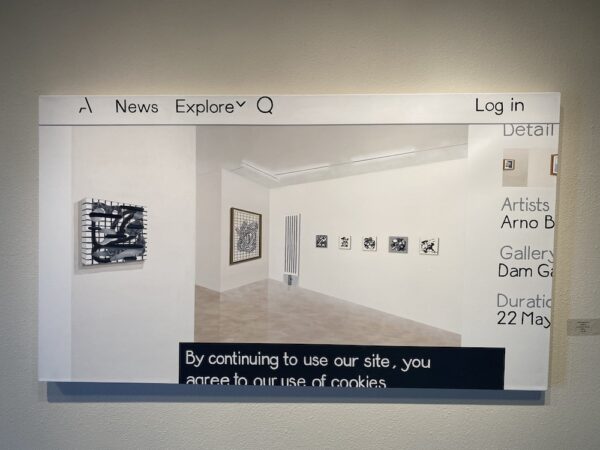 The smallish back gallery, the John F. Lott Gallery, often hosts some of my favorite LHUCA shows. This time is no exception, with Dario S. Bucheli’s paintings of… paintings. Pulled from online museum advertisements, social media posts and the like, Bucheli’s trompe l’oeil paintings really have to be seen in person. Online they look exactly like their source material, but in person there is the detectable, delectable wobble in a circle here, a chunky brush stroke there. Due to their source materials, these works have a limited yet punchy palette, and get into the whole liminal, in-betweenness of things. They are well-executed, timely, and humorous. I can’t remember the last time I really stared at a floor reflection, but I sure did gander at the ones depicted in Open in App and Explore. Woof. I’m already planning my next trip.

All shows through March 27th, 2021. Masks still required for entry to LHUCA.