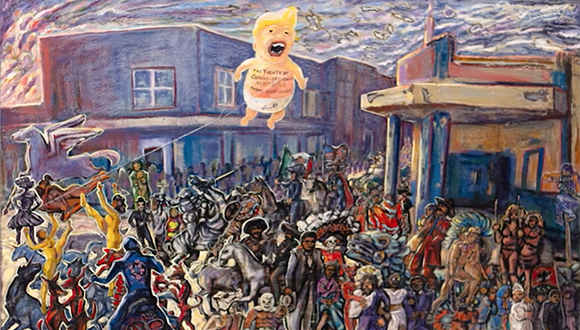 “Centro Cultural Aztlan is honored to present the 43rd annual Segundo de Febrero Virtual exhibition.
Centro Cultural Aztlan has produced and presented the annual Segundo de Febrero exhibit since 1978 in an effort to preserve Mexican American history and culture. This exhibit commemorates the 173rd anniversary of the signing of the treaty of Guadalupe Hidalgo, the ending of the U.S. Mexican war, and the redistribution of a border—creating a new bicultural citizenry with a new consciousness of Mexican American dual identity, history, culture, and traditions.
The visual dialog created by the artists, Angelica Mayorga, Raul Servin, Victor Tello, Israel Rico and Robert Wilkens, take inspiration from past and present events, and not only reflect the Chicano/Latino and indigenous identity issues, but also describe the sentiment towards border issues, history, culture, current political events and the lasting effects of the broken treaty. We at Centro Cultural Aztlan believe it’s important to commemorate and highlight this important event in our history, as it established the new American Southwest and the Mexican American Identity and Community.”

Five-Minute Tours: ‘Where is Here’ at Northern-Southern, Austin