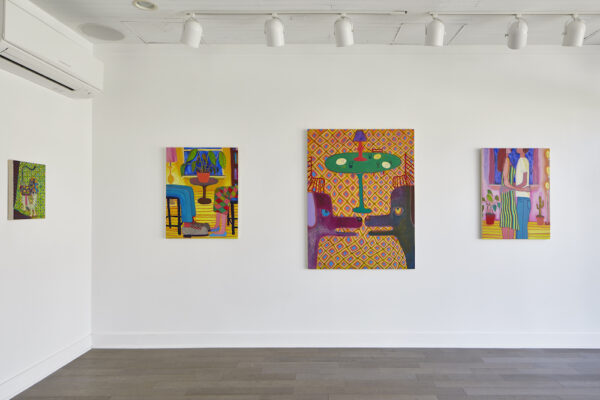 The Austin artist’s latest oil paintings of wacky dogs and human couples are quirky rather than preachy, and reward close viewing with their juicy brushstrokes and wonderfully weird colors and textures. Power Struggles is a surprising, sensitive glimpse into Piwonka’s personal life that also delights us in its unconventional exploration of paint as a material. 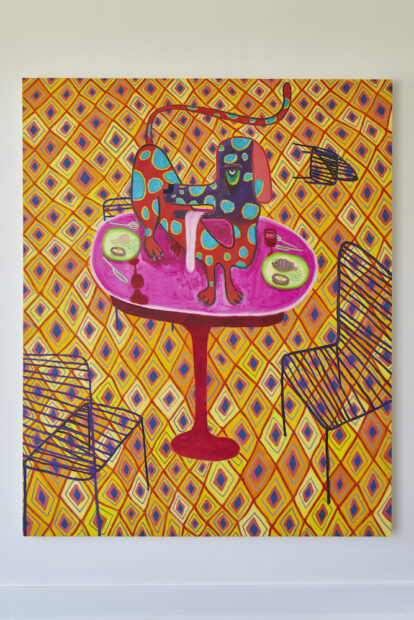 In Piwonka’s works, tangy-colored bad dogs fight for scraps and jump on tabletops. His roughly 5 x 6 foot canvas Hulk (2021) is dominated by a turquoise-spotted, teal-toenailed, pink-eared weiner dog who has just thrown a chair over in his rainbowy rage. But even when Piwonka’s dogs strike their warrior stances, their eyelids sag and their taffy tongues loll out. For all their bright bravado, the dogs exude a floppy impotence. 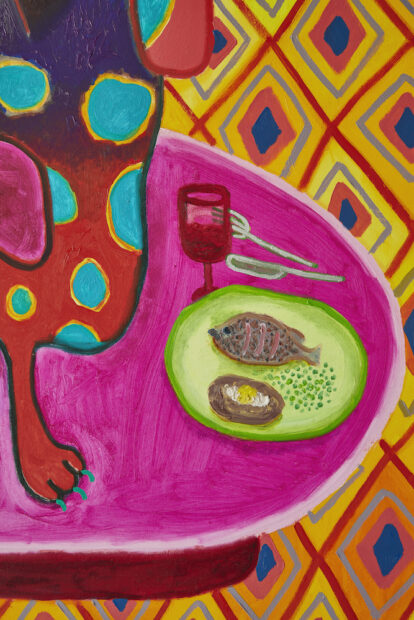 Hulk is colorful and curious, but not quite fearsome. The dinner plates around him are untouched, and here, Piwonka’s careful rendering of a chicken leg, fish filet, and baked potato is one of many funny details in the show. Nearby, a toppled wineglass has only produced a small burgundy smudge that refuses to drip to the floor. The dog, and the toxic masculinity it stands for, are showy but ineffective. Piwonka’s dogs may open their mouths to growl or bite, but they have no teeth.

Whether on wall-sized canvases or at a smaller, more manageable scale, Piwonka’s disgruntled dogs throw temper tantrums in settings that are loosely modeled on the artist’s own home, rugs, and furniture. A rounded table appears in three paintings — though each time in a different color — and the same leafy houseplant shows up in two other works. The everyday household objects act as unlikely auxiliaries to the central action in Piwonka’s paintings. 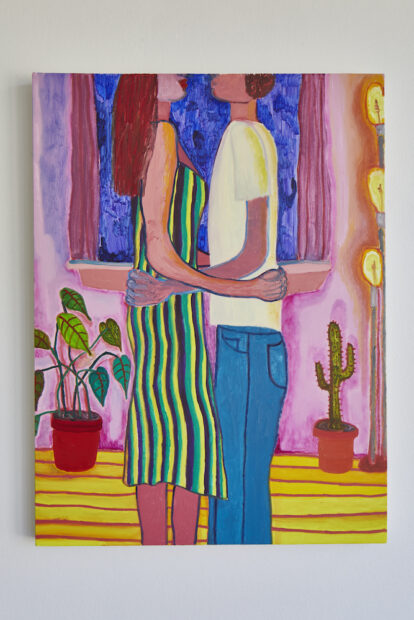 In Hug (2020), for example, a prickly cactus stands awkwardly behind the male figure, while a leafy houseplant appears to reach out gingerly to caress the woman’s dress. In Couple’s Therapy (2021), the same plant sits between the man and woman, its leaves facing out as if it is listening patiently to both sides. In both paintings, Piwonka pays tribute to his longtime artistic influence Philip Guston, with his emphasis on his characters’ clumpy, thickly-painted hands and feet, which seem to speak about the figures’ unresolved roles and relationships. 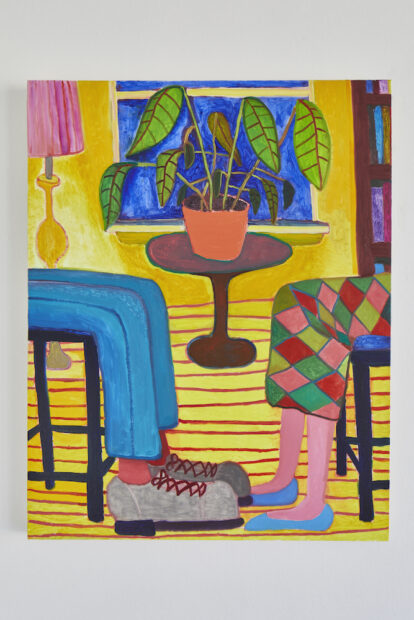 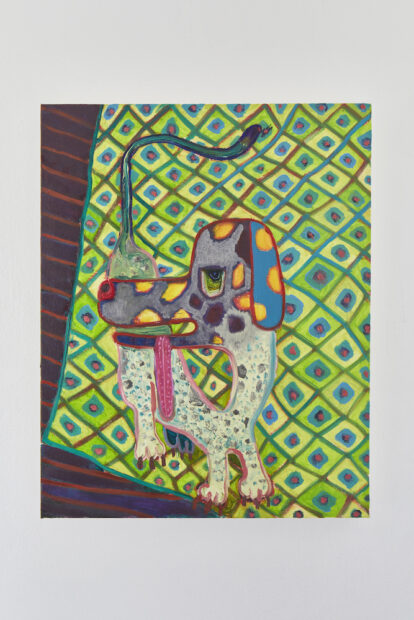 Despite the domesticity, Piwonka’s nearly-neon colors lend a sense of unreality and intensity to his quasi-quotidian environments. The artist uses only highly-pigmented oil paints, and his pungent, saturated colors attract and repel our gaze at the same time. Despite its intimate size, Small Dog (2020) mesmerizes with its tangy color combinations and bizarre layers. This dog’s thickly dappled, cream-colored body clashes with a brushy, lime green patchwork behind him, which clashes again with a slanted, striped pattern in countless shades of purple. The colors are applied to the canvas in Piwonka’s insistent, improvisatory hand, where color tones sometimes shift mid-stroke. The artist obviously invests much forethought into his symmetrical, emotionally freighted compositions, but his looseness when it comes to color makes for an engaging contrast. 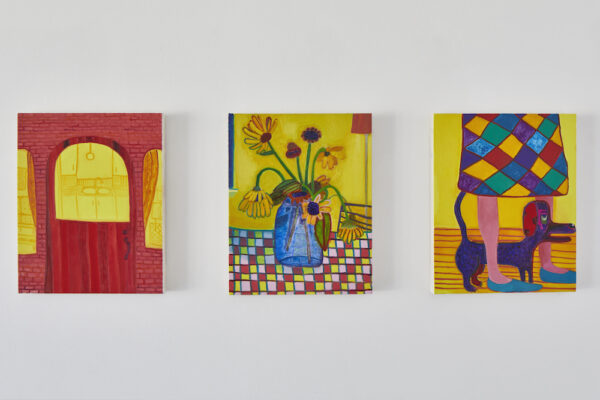 The lone still life in the show, Sunflowers (2021), inevitably evokes Van Gogh, another sincere painter of heady, heightened colors. But Piwonka’s sunflowers — with their straw-like stems and cartoon finger petals — stand in stark contrast to the Dutch painter’s fleshy, bristling bouquets. Despite its candy colors, Piwonka’s still life struggles. Three of his flowers droop downwards, and another hides behind a nearby chair. Below, the flower vase casts a light shadow on a checkerboard tablecloth that, with its unchanging pattern, shows no sign of receding backward into space. Piwonka’s failing flowers and confounding sense of flatness inject an unsettled tone into what could otherwise be a benign, easy picture.

Like Van Gogh, Piwonka isn’t only interested in subjects that are easily made beautiful. But with his heartfelt, humorous approach to toxic masculinity and his bold compositions and colors, Piwonka ends up attracting our eye and admiration anyway.